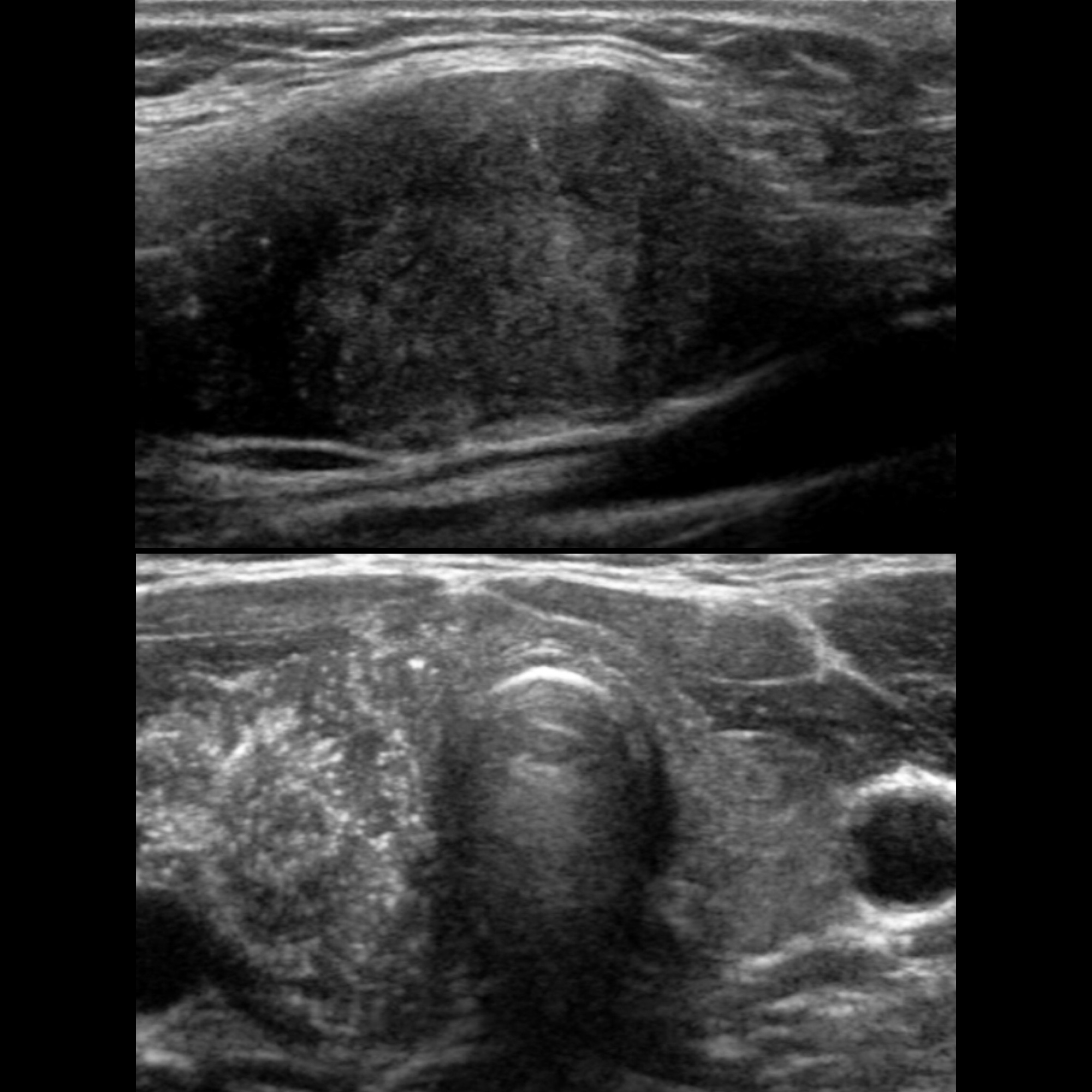 School ager
with a lump in the right neck. Sagittal US of the right neck (above) shows an enlarged lymph node that does not have a normal fatty echogenic hilum and that does have several microcalcifications within it. Transverse US of the thyroid gland (below) shows a mass in the right lobe of the thyroid gland that contains numerous microcalcifications.The diagnosis was papillary thyroid cancer.
pediatricimaging.org • CC-by-nc-sa 4.0
Hallo!
Radiopaedia • CC-by-nc-sa 3.0 • de

Papillary thyroid carcinoma (PTC) is the most common malignancy of the thyroid gland and frequently has nodal metastases at presentation.

When the tumor measures <1 cm, the term micropapillary carcinoma (mPTC) is used .

Papillary thyroid cancer (as is the case with follicular thyroid cancer) typically occurs in the middle-aged, with a peak incidence in the 3 and 4 decades. It is more common in women with an M:F ratio of 1:2.5 (range 1:1.6-3:1) .

It accounts for the majority (~70%) of all thyroid neoplasms and 85% of all thyroid cancers . There are 45,000 cases in the United States every year and this type of carcinoma has the fastest increasing incidence of any malignancy in the thyroid. Those at risk include family history and previous head/neck radiation.

Presentation is usually with a solitary palpable thyroid mass.

Papillary carcinoma has a tendency to metastasize early to local lymph nodes, with 50% (39-90% ) of patients having nodal involvement at presentation  (c.f. 10% for follicular thyroid cancer). These metastases are usually to the ipsilateral jugular chain (87.8%) and are usually confined to the mid and lower lymph node levels, level III and IV (73.2%) .

In ~20% of patients, lymph node metastases are the first presentation. In 50% of children and 20% of adults a cervical lymph node is palpable at the time of diagnosis .

Distal haematogenous dissemination is less common than with follicular cancer, with a prevalence of only in 5-10% of patients at presentation.

Several variants have been described according to biological behavior

Imaging of the neck of a patient with papillary thyroid carcinoma involves both examination of the thyroid as well as careful assessment of the regional lymph nodes for the presence of metastases.

Papillary carcinoma within the thyroid usually appears as a solitary mass usually with an irregular outline, located in the subcapsular region and demonstrating vascularity . Small punctate regions of echogenicity representing microcalcifications (psammoma bodies) may be present .

Lymph node metastases have a tendency to completely cavitate (40%), and although usually multiple, in a minority of cases (6%) a single completely cystic node may be present . They tend to have septations, mural nodules and relatively thick walls .

Any thyroid nodule presents a diagnostic challenge as up to 50% of the general population will have thyroid nodules of some description on high-resolution thyroid ultrasound. There has previously been great variance in investigating thyroid nodules with some operators routinely aspirating thyroid lesions while others use traditional discriminators such as size in deciding whether or not to proceed to needle biopsy.

Recent research in North America, Korea, and Europe has demonstrated that traditional discriminators are poor correlates for thyroid cancer, which is most commonly papillary. Guidelines have now been produced to broadly categorize nodules as benign, indeterminate, or suspicious for malignancy with a shift in focus to looking at ultrasound appearances rather than simply size.

The U-classification system is an example proposed by the British Thyroid Association.

MRI, although probably more sensitive than CT, is nonetheless still far from perfect with a sensitivity of only 67% . This is largely a result of the fact that as many as half involved nodes found histologically following surgery, being less than 3 mm in diameter .

Overall papillary carcinoma carries a relatively good prognosis with a 20 year survival rate of approximately 90%. The 5 year survival is in the range of 95%.  If the tumor is confined to the gland then mortality is less than 2.5%, with a sharp increase in mortality in patients with extension beyond the gland, to 38% .

There is a paucity of high quality data on the extent of surgery required (thyroid lobectomy versus total thyroidectomy) for low risk papillary thyroid cancer . A recent systematic review suggests that operative approach did not impact overall survival .

Other thyroid neoplasms should be considered in the absence of cavitary cervical lymph nodes.

The differential of a cystic neck mass(es) includes: