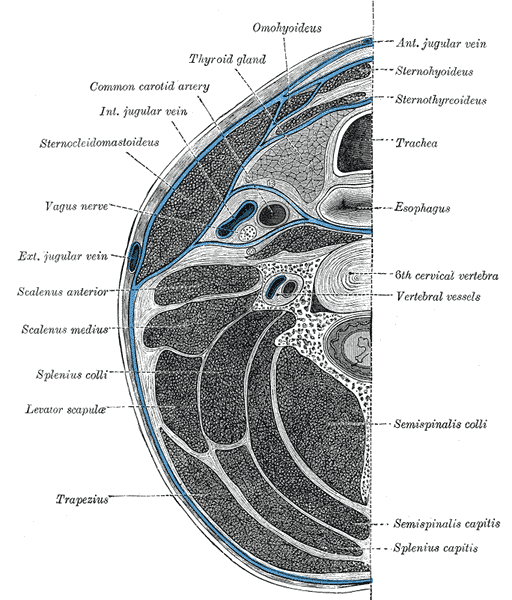 A
cross-section diagram of the human neck at the level of C6 showing the fascia compartments, muscles, organs, bone, and major arteries, veins, and nerves.
Wikipedia • Public domain

The vagus nerve is the tenth (X) cranial nerve and provides the bulk of the parasympathetic input to the gastrointestinal system and to the heart. It is a complex mixed sensory, motor and parasympathetic nerve.

The vagus nerve arises as multiple rootlets at the posterolateral sulcus of the medulla, between the inferior cerebellar peduncle and inferior olivary nucleus.

There are four cranial nerve nuclei that contribute to the vagus nerves:

Fibers from the central nuclei exit/enter the medulla at the postolivary sulcus, in between the glossopharyngeal nerve (CN IX) and the cranial root of accessory nerve (CN XI). From here, the vagus nerve travels through the basal cistern to exit the skull through the pars vascularis part of the jugular foramen to enter the carotid space. Within the jugular fossa lies the superior (jugular) sensory ganglion of the vagus nerve and the inferior (nodose) ganglion, which lies approximately 1 cm distally.

The vagus nerve descends vertically through the neck within the carotid sheath, where it lies posteriorly between the internal/common carotid artery and internal jugular vein.

Since the thorax is not symmetrical, the course of the left and right vagus nerves is not identical.

The left vagus nerve crosses anterior to the left subclavian artery as it enters the thorax. It passes lateral to the aortic arch as it descends posterior to the hilum of the left lung and towards the esophageal hiatus, which it passes through to enter the abdominal cavity.

The right vagus nerve also passes anterior to the right subclavian artery before diving into the fat surrounding the innominate vessels. It reaches the right paratracheal region before descending, like the left, posterior to the lung hilum and then medially to the esophageal hiatus, which it passes through to enter the abdominal cavity.

Near the esophageal hiatus the left and right vagus nerves meet and join to form the esophageal plexus, from which an anterior and posterior vagal trunk (also called gastric nerves) form and descend into the abdomen. The trunks are not composed of equal fibers from the left and right as the anterior trunk is mainly composed of fibers from the left.

The branches of the vagus nerve are described below, starting with the proximal branches and moving distally.

From the superior ganglion:

From the inferior ganglion:

From the vagus nerve:

First-line choice for imaging investigation for distal vagal neuropathy. Contrast-enhanced images from hyoid bone to mediastinum should be obtained.

Bony reformat CT of the skull base may be beneficial as an adjunct study to MRI for imaging proximal vagal neuropathy.

First-line choice for imaging investigation of proximal vagal neuropathy. Sequences should include T1W, T2W, contrast-enhanced T1W FS in axial and coronal planes and images acquired should extend from the medulla to hyoid bone.

The vagus nerve can be affected by pathology from its origin to anywhere along its course.

As the vagus nerve is mostly parasympathetic, sensory clinical features can be subtle or absent; especially when affected below the origin of the recurrent laryngeal nerves. Features include :

Brainstem lesions that may affect the vagus include:

Vagus is Latin for wandering, named because of the long, wandering course of the nerve; the same Latin root gives rise to the English word, a vagrant.