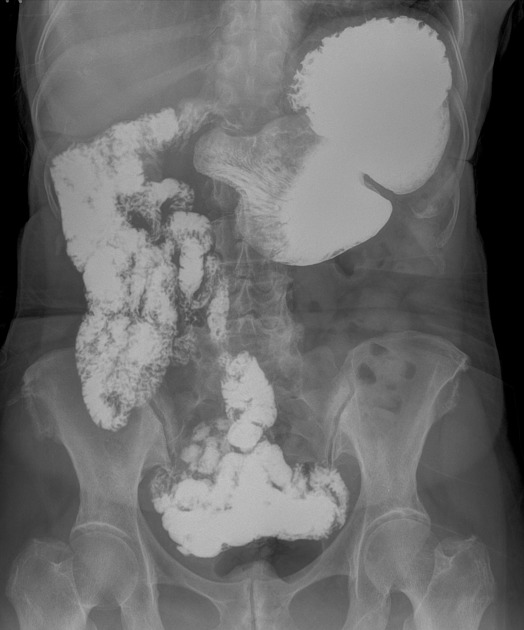 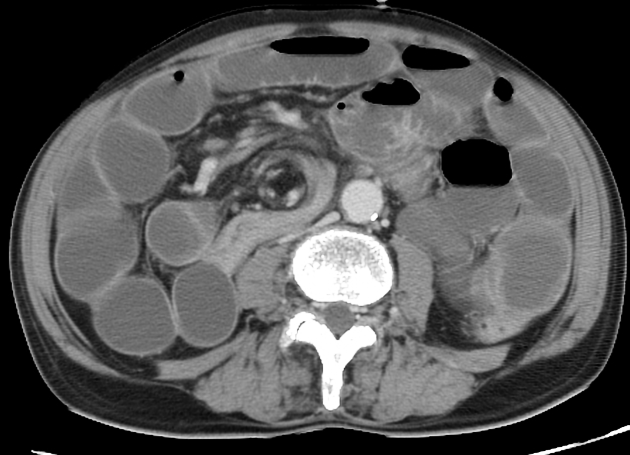 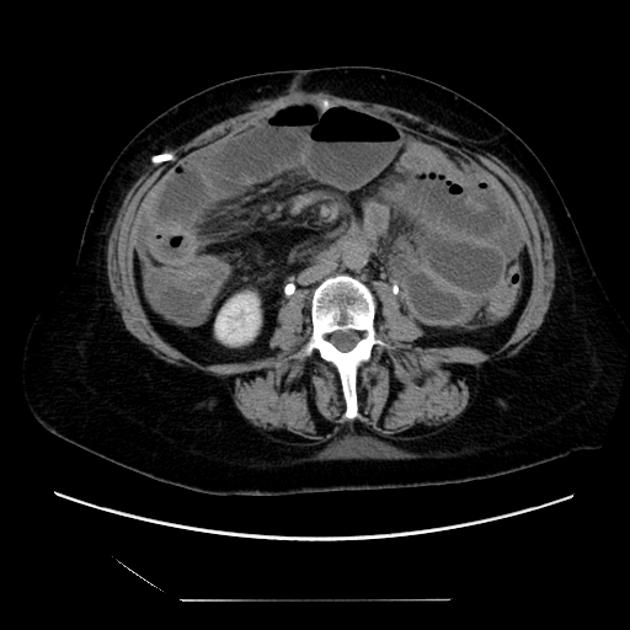 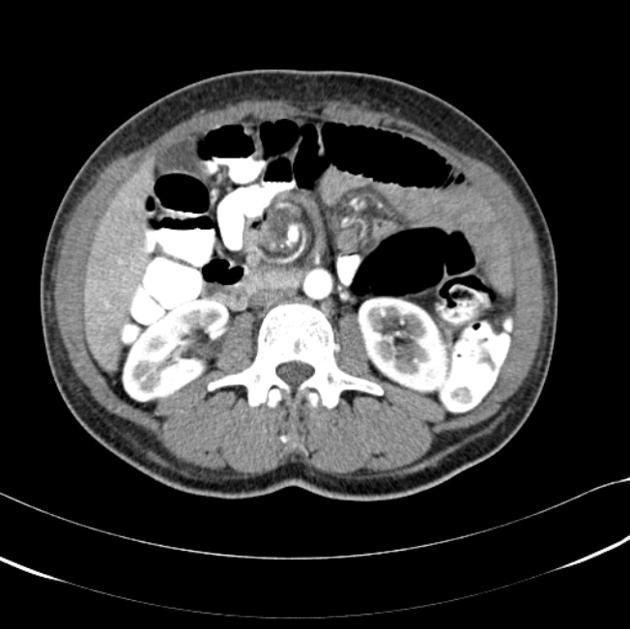 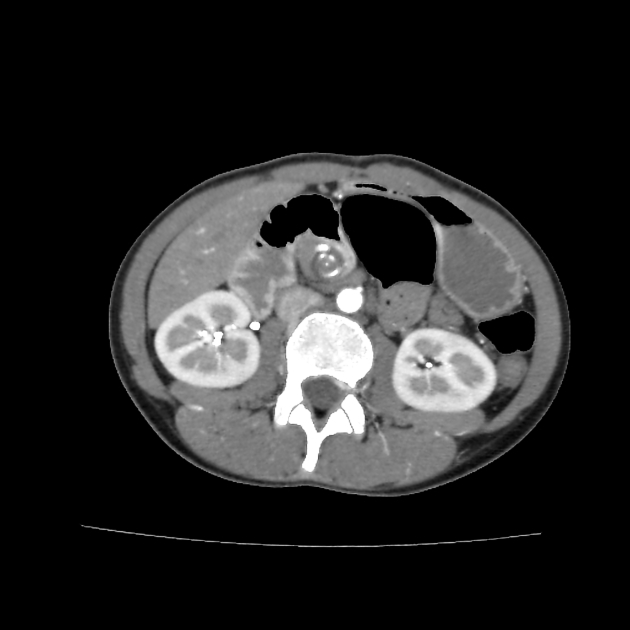 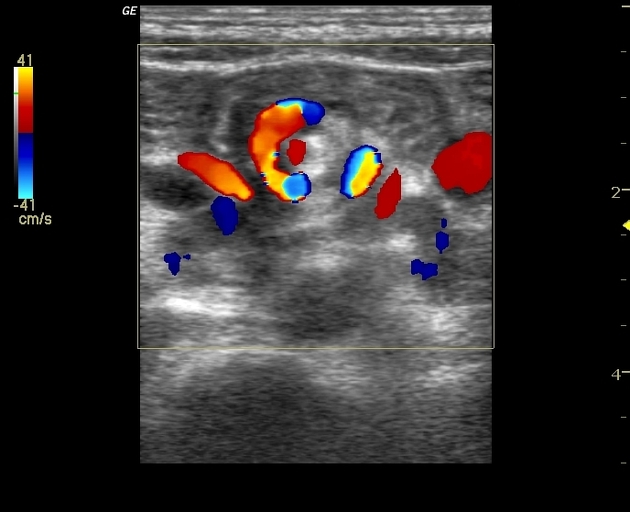 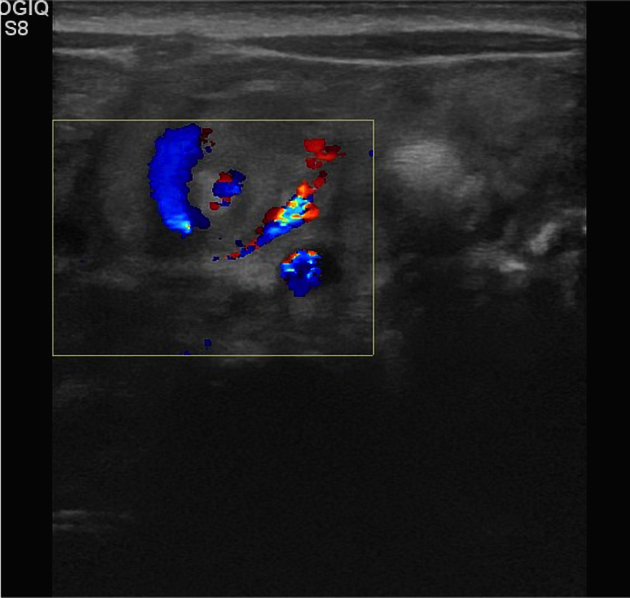 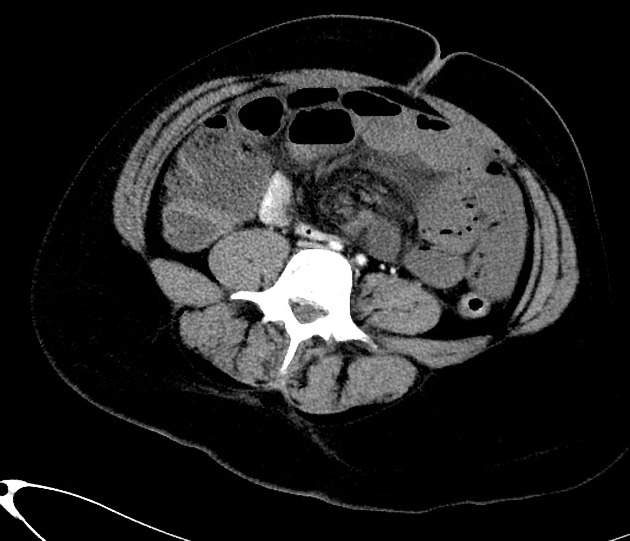 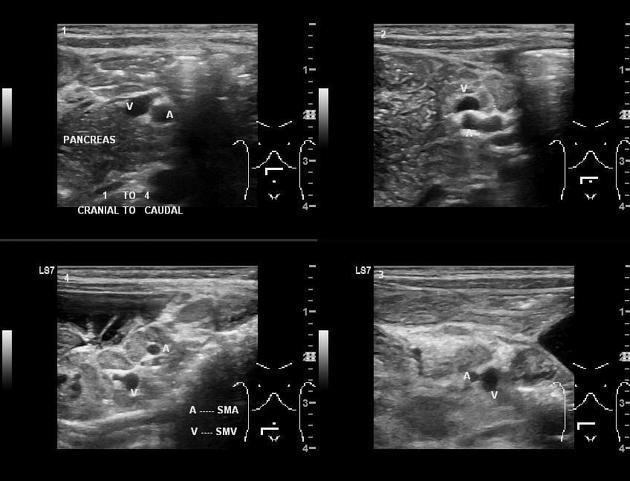 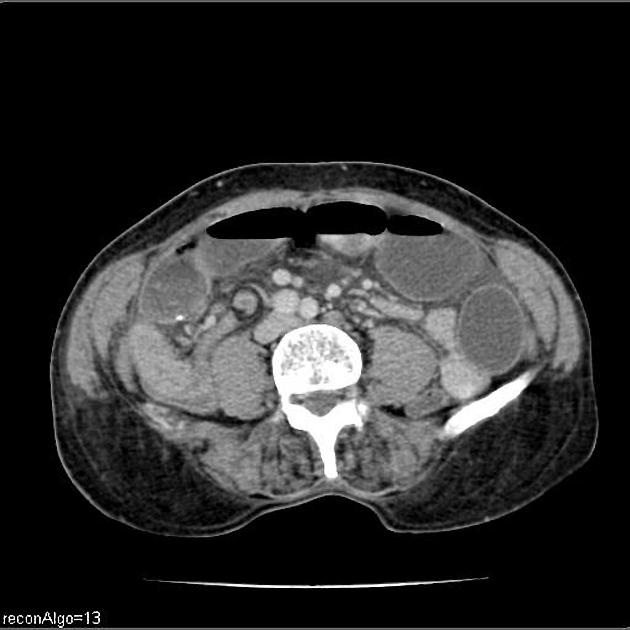 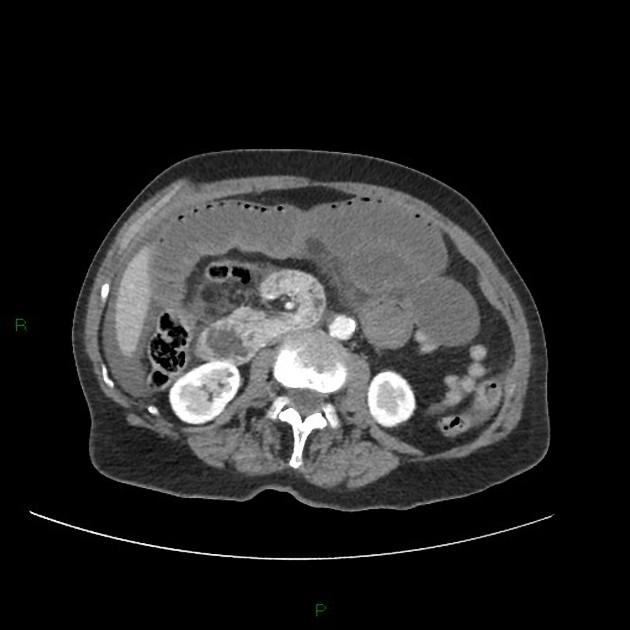 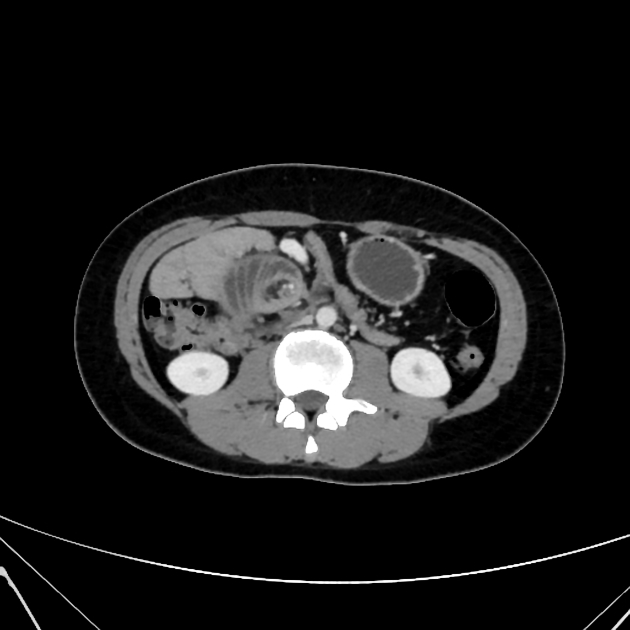 Midgut volvulus is a complication of malrotated bowel. It may result in proximal bowel obstruction with resultant ischemia if prompt treatment is not instigated.

A midgut volvulus of malrotated bowel can potentially occur at any age but in approximately 75% of cases occur within a month of birth . Most of these are within the first week with 90% occuring within 1 year .

Typically the neonate is entirely normal for a period before suddenly presenting with bilious vomiting. If the volvulus does not spontaneously reduce, then the venous obstruction created by the superior mesenteric vein wrapped around the superior mesenteric artery results in venous obstruction and gradual onset of ischemia and eventual necrosis. As this occurs, the abdomen becomes swollen as fluid accumulates in the lumen of the bowel, and becomes tender. Eventually, peritonitis and shock become established.

Midgut volvulus occurs as a complication of intestinal malrotation.

Unfortunately, plain radiographs are non-contributory appearing either normal early on or having appearances of bowel obstruction or even pneumoperitoneum later in the course of the disease.

Occasionally complete obstruction can lead to distension of the duodenal bulb and stomach leading to a double bubble sign .

A pediatric upper gastrointestinal contrast study is the examination of choice when the diagnosis is suspected. Not only is it able to identify the volvulus, but even in instances where spontaneous reduction has occurred, the underlying malrotation will be evident.

In the setting of volvulus findings include:

Contrast enemas have also been used historically. The theory being that in malrotation the large bowel will also be malrotated. Unfortunately, in 20-30% of cases, the cecum is normally located. The converse is also true, with the position of the cecum in normal individuals being variable .

CT is often carried out in older patients, in which presentation is non-specific.

Urgent surgical repair (Ladd procedure) is required to prevent ischemia or to resect infarcted bowel loops. If resection is performed stomas are usually created. Additionally, the Ladd bands are divided and the mesenteric pedicle widened. In some instances, pexy (surgical fixation) of the duodenum and cecum may be performed although it is unclear if this is of benefit in preventing recurrence .  It should be noted that normal anatomical positioning is not achieved; the duodenum and small bowel remain on the right, and the cecum and colon are on the left side of the abdomen .

Prognosis is dependent on the state of the small bowel and presence of systemic shock. In cases where no ischemia of the bowel is present, and the child is otherwise well, the prognosis is extremely good. Overall mortality of 3-9% is reported .

Small bowel obstruction for adhesions is seen a distant complication in 5-10% of cases.

Vomiting in infancy has numerous causes and needs to be distinguished from normal possetting. Differential of a proximal obstruction includes :