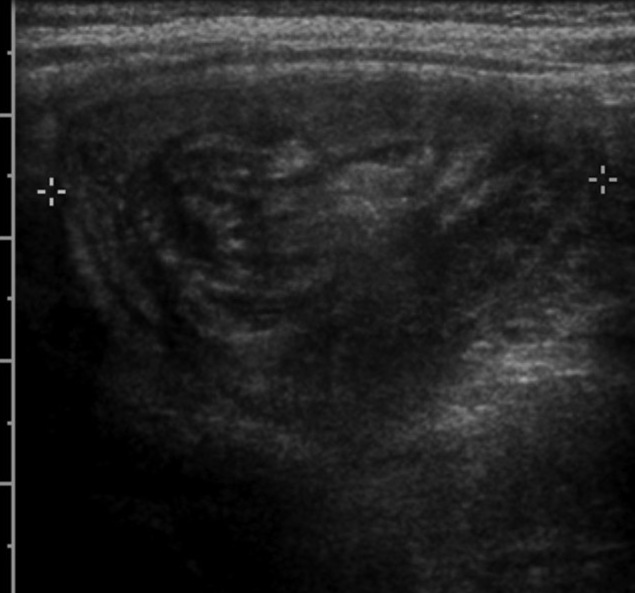 An ultrasound
showing target sign which is a characteristic finding for intussusception on ultrasound, this ultrasound is for a 3 year old boy with intestinal intussusception. source:Radiopedia.org and case
Wikipedia • CC BY-SA 3.0 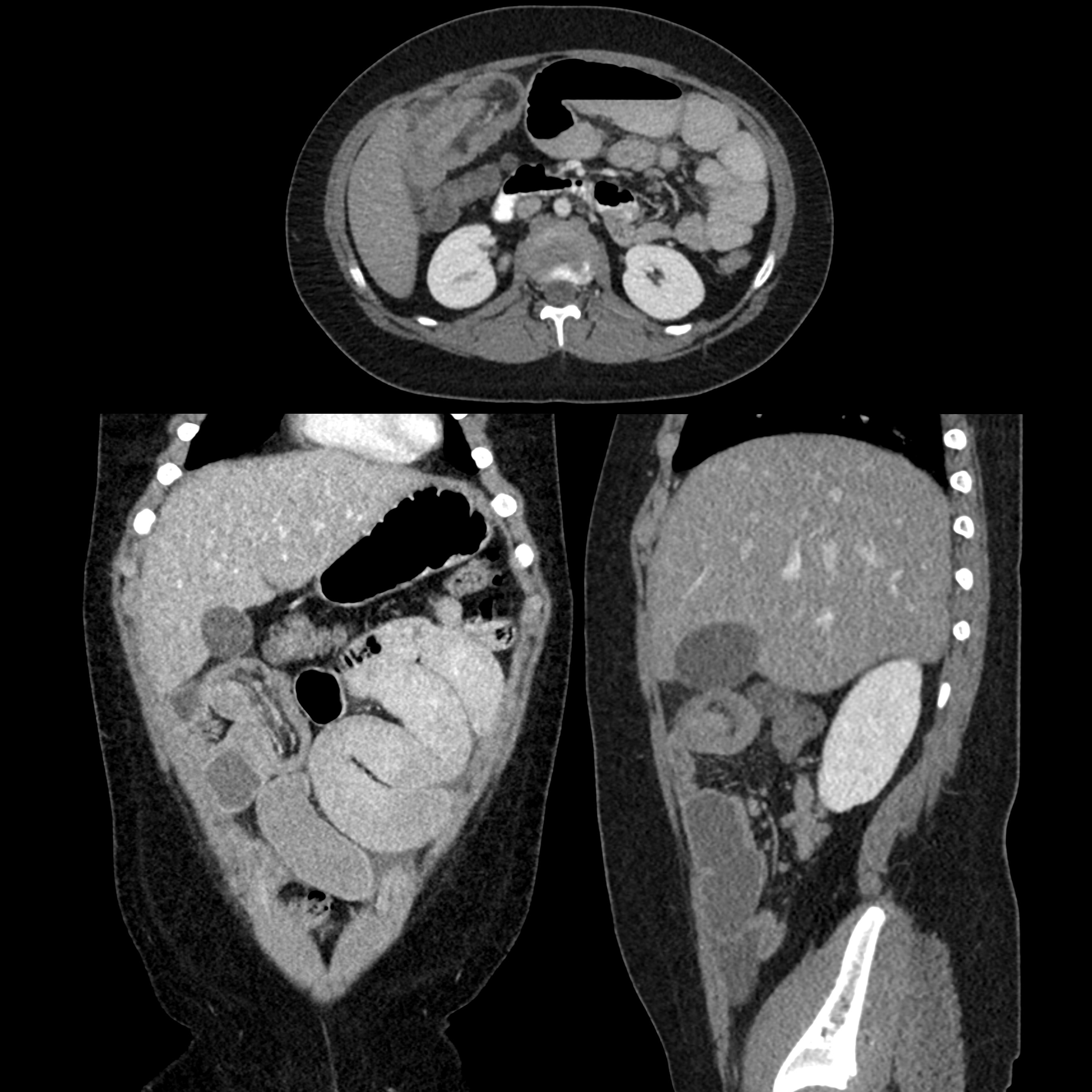 School ager
with abdominal pain. Axial (above), coronal (lower left) and sagittal (lower right) CT with contrast of the abdomen shows multiple dilated loops of small bowel and a soft tissue mass in the right upper quadrant just beneath the gall bladder that shows the target sign on the sagittal image and the pseudokidney sign on the transverse and coronal images. The soft tissue mass was still present on an US performed 1 hour later.The diagnosis was small bowel obstruction due to an ileal-ileal intussusception caused by Burkitt lymphoma.
pediatricimaging.org • CC-by-nc-sa 4.0 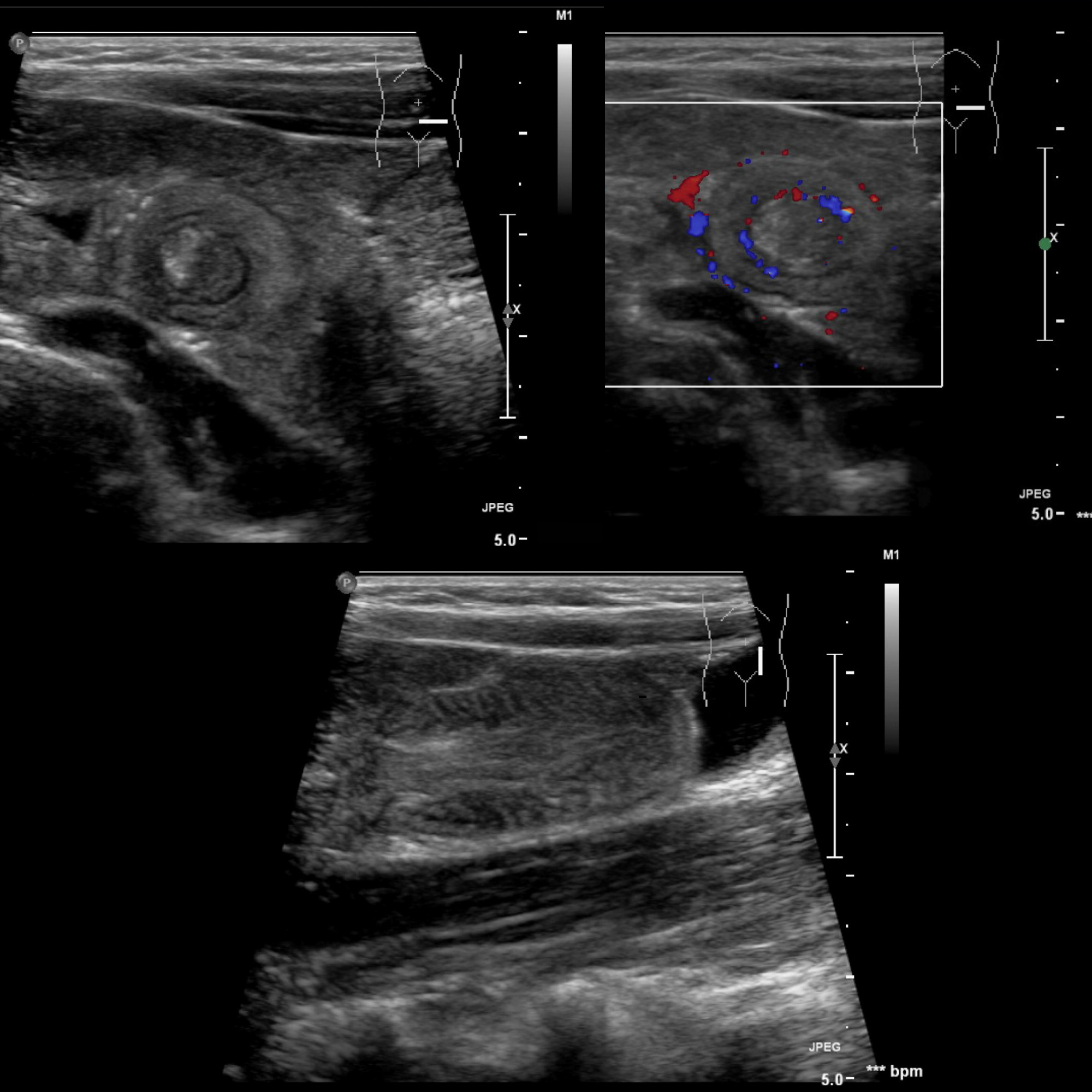 Intussusception occurs when one segment of bowel is pulled into itself or a neighboring loop of the bowel by peristalsis. It is an important cause of an acute abdomen in children and merits timely ultrasound examination and reduction to preclude significant sequelae including bowel necrosis. When occurring in the adult population, intussusception is usually caused by a focal lesion acting as a lead point.

The vast majority of intussusceptions occur in children (95%), usually after the first three months of life .

While the classic triad of intermittent abdominal pain, vomiting, and right upper quadrant mass, plus occult or gross blood on rectal examination has great positive predictive value for intussusception in children , these findings are seen in less than 20% of intussusception cases . Approximately 15% (range 13-22%) of patients with intussusception do not even present with abdominal pain . Classic physical exam findings include an oblong palpable mass in the right upper quadrant described as "sausage-like" with a paucity of palpable bowel in the right lower quadrant .

In children, a lead point is not identified in 90% of cases, and this is most frequently thought to relate to hypertrophic lymphoid tissue following an infection. This potentially explains the relative rarity of the condition in the first three months of life, when passive immunity is still paramount.

In infants and adults, a lead point is more frequently identified with up to 90% of adult cases having a lead point (which is usually malignant in the large bowel and benign in the small bowel ).

Lead points are numerous and include :

Intussusception can occur essentially anywhere. In adults, no pattern of distribution is present as such as in the vast majority of cases a lead point lesion is present, and thus the location will depend on the location of that lesion. In children there is a strong predilection for the ileocolic region:

Abdominal x-rays may demonstrate an elongated soft tissue mass (typically in the upper right quadrant in children) with bowel obstruction (and therefore air-fluid levels and bowel dilation) proximal to it. There may be an absence of gas in the distal collapsed bowel.

A contrast enema remains the gold standard, demonstrating the intussusception as an occluding mass prolapsing into the lumen, giving the "coiled spring” appearance (barium in the lumen of the intussusceptum and in the intraluminal space). The main absolute contraindication for an enema is a perforation, which needs to be treated surgically.

Ultrasonography has a false-negative rate approaching zero and is a reliable screening tool for children at low risk for intussusception . Children with classic findings of intussusception, however, need to be investigated with an enema, which is both diagnostic (the gold standard in the diagnosis of intussusception) and therapeutic.

Small bowel intussusception has a predilection for the paraumbilical to left upper/lower quadrants of the abdomen . While typically transient, surgical management may be required if spontaneous reduction is unlikely to occur. Sonographic features which are considered more consistent with an uncomplicated clinical course include:

CT has become the modality of choice for assessment of acute abdomen in adults, and thus most frequently images intussusception. Also, short length transient intussusception is a frequent incidental finding.

The appearance of intussusception on CT is characteristic and depends on the imaging plane and where along the bowel the images are obtained.

Best known is the so-called bowel-within-bowel configuration, in which the layers of the bowel are duplicated forming concentric rings (CT equivalent of the ultrasonographic target sign) when imaged at right angles to the lumen, and a soft tissue sausage when imaged longitudinally .

At the proximal end of the intussusception, there will be two concentric enhancing/hyperdense rings, formed by the inner bowel and the folded edge of the outer bowel. As one images further along the intussusception the mesentery (fat and vessels) will form a crescent of tissue around the compressed innermost lumen, surrounded by the two layers of the outer enveloping bowel. Even further distally the lead point (if present) will be visualized .

In children, intussusception reduction can be achieved without recourse to surgery in most cases. Using a water-soluble medium or air introduced via a rectal catheter, retrograde pressure can be exerted to reduce the intussusception. If symptoms have been protracted, rectal blood is present; there are signs of peritonitis or enema reduction is unsuccessful then surgical intervention is usually required. With no surgical treatment, there can be recurrence rates of up to 30%.

In adults, a laparotomy is usually required, especially as in most cases a lead point requiring treatment is present.

On imaging the appearances on ultrasound and CT are characteristic. The main differential is that of transient intussusception, which is an incidental finding requiring no treatment or follow-up.

Other conditions to be considered in adults include: