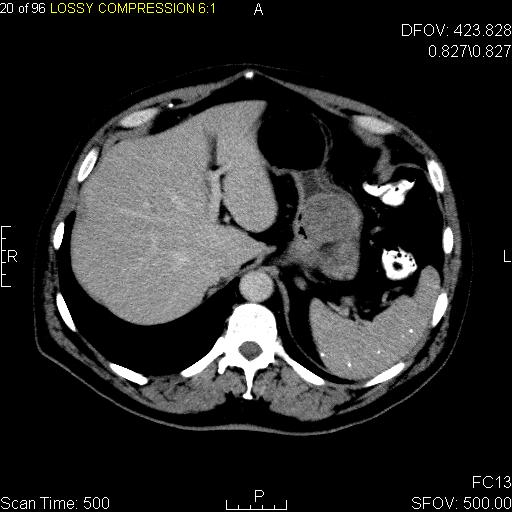 Axial
contrast enhanced CT image of a gastrointestinal stromal tumor in the fundus of the stomach
Wikipedia • CC BY-SA 3.0

Axial CT
image of a small subserous gastrointestinal stromal tumor in the posterior wall of the stomach
Wikipedia • CC BY-SA 3.0

Gastrointestinal stromal tumors (GISTs) are the most common mesenchymal tumors of the gastrointestinal tract. They account for ~5% of all sarcomas, and are mostly found within stomach and mid-distal small bowel. They respond remarkably well to chemotherapy.

Previously these tumors have been variably referred to as leiomyomas, leiomyosarcomas, and leiomyoblastomas, as they were difficult to differentiate on histopathology until a characteristic expression of c-KIT and CD34 antigens was identified.

The vast majority of GISTs are sporadic; however, they are recognized to occur in the following syndromes :

Clinical presentation is variable and reflects the variability of appearance, location, and biological behavior.

They are believed to arise from the interstitial cells of Cajal , with 95% staining positive for CD117 (c-KIT) and 70% for CD34 . The former is a tyrosine kinase growth factor receptor and the target of ST-571 (imatinib/Gleevec/Glivec) .

Grading GISTs requires an assessment of both tumor size and mitotic index . Smaller lesions have less aggressive biological behavior, as do stomach GISTs when compared to tumors elsewhere along the gastrointestinal tract .

They are rounded with frequent hemorrhage. Larger tumors may also demonstrate necrosis and cystic change . Size is variable, ranging from 1 to 30 cm .

Histology demonstrates a relatively cellular tumor composed of spindle cells (70-80%) and plump epithelioid cells (20-30%) . They appear to arise from the muscularis propria layer.

GISTs occur anywhere along the gastrointestinal tract. Common sites of involvement include :

Specific appearances will vary according to location (see above), but in general, these tumors appear as rounded soft tissue masses, arising from the wall of a hollow viscus (most commonly the stomach) with an endoluminal or exophytic growth. Mucosal ulceration is present in 50% of cases  with large necrotic cavities communicating with the lumen also seen.

When large, secondary signs of the tumor may be visualized by radiograph, e.g. soft tissue density displacing bowel loops.

On upper abdominal studies, filling defect projecting from the wall of the stomach may be seen, with overlying ulceration or cavitation. The tumor margins are normally seen as smooth and may form right or obtuse angles with the adjacent mucosa due to its intramural origin.

Appearances vary with size and location. Typically the mass is of soft tissue density with central areas of lower density when necrosis is present (usually in larger tumors) that occasionally appear as fluid-fluid levels.

As the tumors are often exophytic, it can be difficult to delineate them on CT if the stomach is distended with barium, though the non-enhancing central necrotic area may be helpful. Deep crescent-shaped ulceration demonstrating an internal air-fluid level may be referred to as the Torricelli-Bernoulli sign .

Enhancement is typically peripheral (due to central necrosis) . Calcification is uncommon (3%) .

Metastases (distant, peritoneal, omental) or direct invasion into adjacent organs may be seen in more aggressive lesions. Lymph node enlargement is not a feature .

The diagnosis of malignant GIST requires histopathologic analysis, but certain characteristics suggest malignancy, which develops in 10-30% of these lesions. These include exogastric growth, diameter >5 cm, central necrosis, and extension to other organs.

GISTs are FDG-avid tumors and F-18 FDG PET-CT can be used for initial staging and treatment response assessment . Areas of central necrosis can be photopenic on PET-CT (i.e. have low or absent tracer uptake) .

The Choi response criteria are used to assess treatment .

Surgical en-bloc resection is the primary mode of therapy for GISTs . Up to 50% of all GISTs will have evidence of metastatic disease at the time of presentation , which significantly impacts prognosis.

Adjuvant chemotherapy with ST-571 (imatinib) is effective in the majority of cases and has had a dramatic impact on prognosis even with only one year of therapy, reducing recurrence at one year from 17% to 3% . Longer treatment regimes (2-3 years of imatinib) are currently under investigation . Other second-line agents (e.g. sunitinib) are also being studied and used for patients with imatinib-resistant tumors.

Historically, before ST-571 (imatinib) up to 85% of tumors would locally recur or develop subsequent distal metastases despite treatment  and had proven to be resistant to standard chemotherapy .