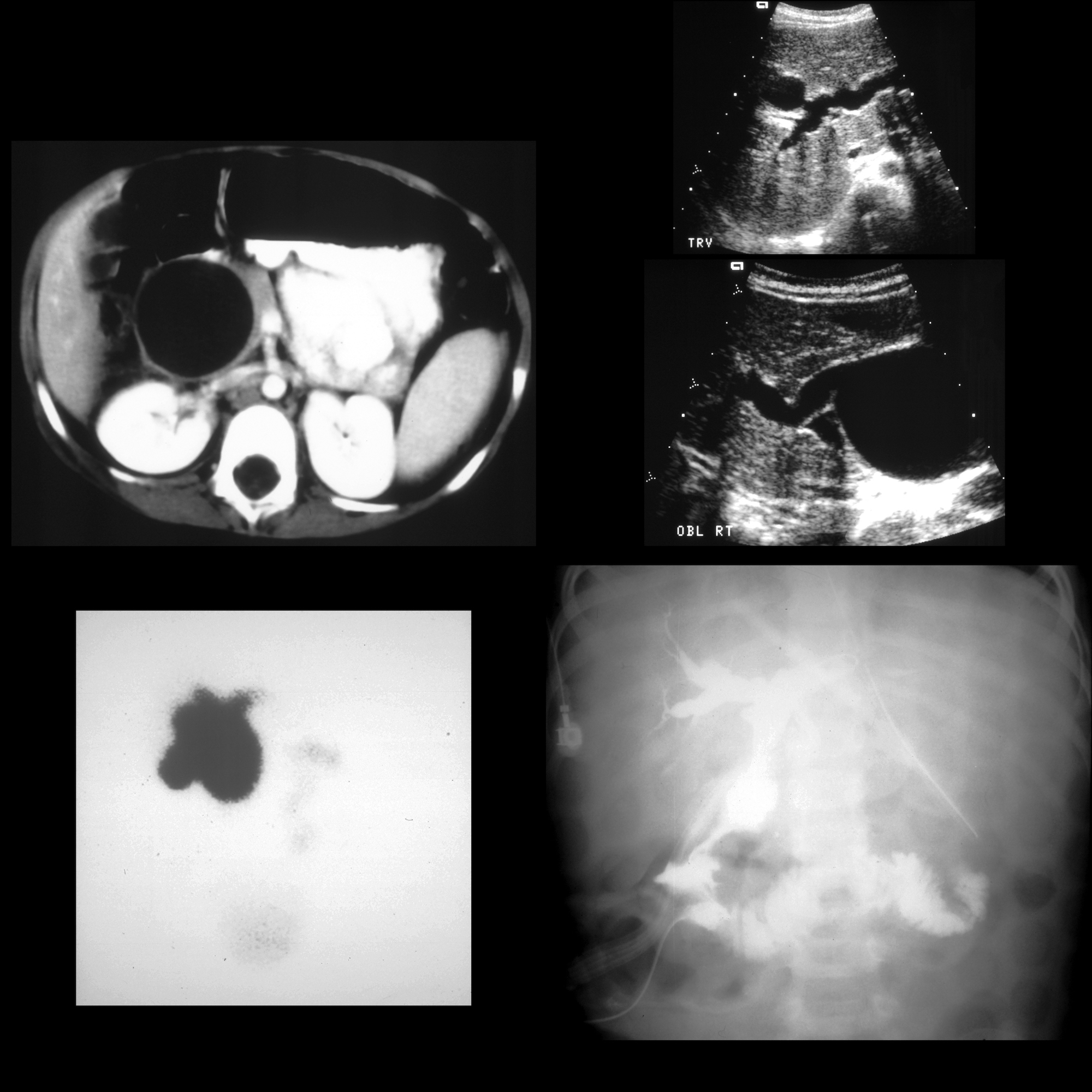 School ager
with abdominal pain after trauma. Axial CT with contrast of the abdomen (upper left) shows a large round low density structure inferior to the liver and separate from the gall bladder. Transverse and sagittal US of the liver show the round structure to be cystic and in communication with a dilated biliary tree. Delayed image (lower left) from a hepatobiliary scintigraphy exam shows concentration of radiotracer into the round structure which is slowly excreted into the bowel. AP image of an intraoperative cholangiogram (lower right) shows dilation of the intrahepatic and extrahepatic biliary tree with free flow of contrast into the bowel.The diagnosis was choledochal cyst causing biliary obstruction.
pediatricimaging.org • CC-by-nc-sa 4.0
Hallo!
Radiopaedia • CC-by-nc-sa 3.0 • de

Choledochal cysts represent congenital cystic dilatations of the biliary tree. Diagnosis relies on the exclusion of other conditions (e.g. tumor, gallstone, inflammation) as a cause of biliary duct dilatation.

Choledochal cysts are rare, with an incidence of 1:100,000-150,000. Although they may be discovered at any age, 60% are diagnosed before the age of 10 years . There is a strong female predilection with M:F ratio of 1:4. There is a greater prevalence in East Asia.

Classical presentation includes the triad of :

This triad is however only present in ~40% (range 19-60%) of cases, with palpable mass being the least common manifestation.

Their etiology is uncertain, but a close association with the anomalous formation of the pancreaticobiliary ductal junction is reported in some subtypes . Due to this anomaly, there is a large common channel draining pancreatic and bile duct. Thus the pancreatic juices cause cholangitis and bile duct wall destruction, which together with distal stenosis due to scarring result in the formation of a choledochal cyst.

A number of associations are recognized, including :

Commonly accepted classification currently is one devised by Todani et al. There are five main types, with several subtypes some of which can be pathologically unrelated:

The Todani classification scheme has been called into question in surgical literature, with claims that it may unfairly link multiple distinct processes into a spuriously coherent grading scheme .

The Komi classification classifies choledochal cyst into 3 types based on the anomalous union of the pancreatic-bile duct (AUPBD) .

Imaging of the biliary tree can be achieved with ultrasound, CT, direct contrast studies (ERCP, PTC) or MRI.

The key to the diagnosis is a dilated cystic lesion which communicates with the bile duct and is separate from the gallbladder. A careful search for other causes needs to also be undertaken (see differential below), remaining cognizant that both stone formation and malignancy are associated with choledochal cysts.

Findings are similar to ultrasound, with a greater ability to demonstrate intrahepatic disease and complications.

Patients with type I, II, or IV cysts usually undergo surgical resection of the cyst due to the risk of malignancy. A number of possible approaches exist, depending on cyst location and other factors. Typically a Roux-en-Y hepaticojejunostomy is performed .

The two most frequent complications of choledochal cysts are stone formation and malignancy. Complications include: