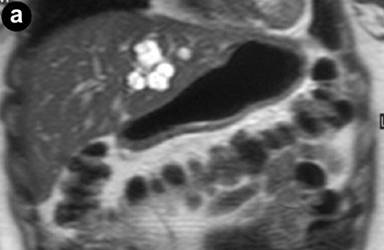 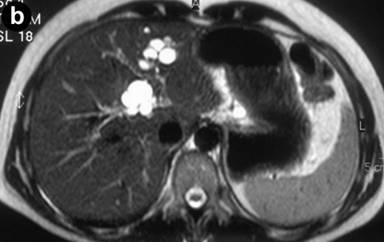 Magnetic
resonance imaging (MRI) of a 27 year old woman with Caroli disease. Conventional turbo spin echo T2-weighted axial (a., b. and c.) and coronal (d.) MR views show multiple cystic lesions in the left liver lobe as well as in the pancreatic tail. Saccular ectasia of the main biliary duct is also depicted.
Wikipedia • CC BY 4.0

Magnetic
resonance cholangiopancreatography (MRCP) of the liver of a 27 year old woman with Caroli disease. Multiple cystic lesions in the left liver lobe. Saccular ectasia of the main biliary duct is also depicted.
Wikipedia • CC BY 4.0 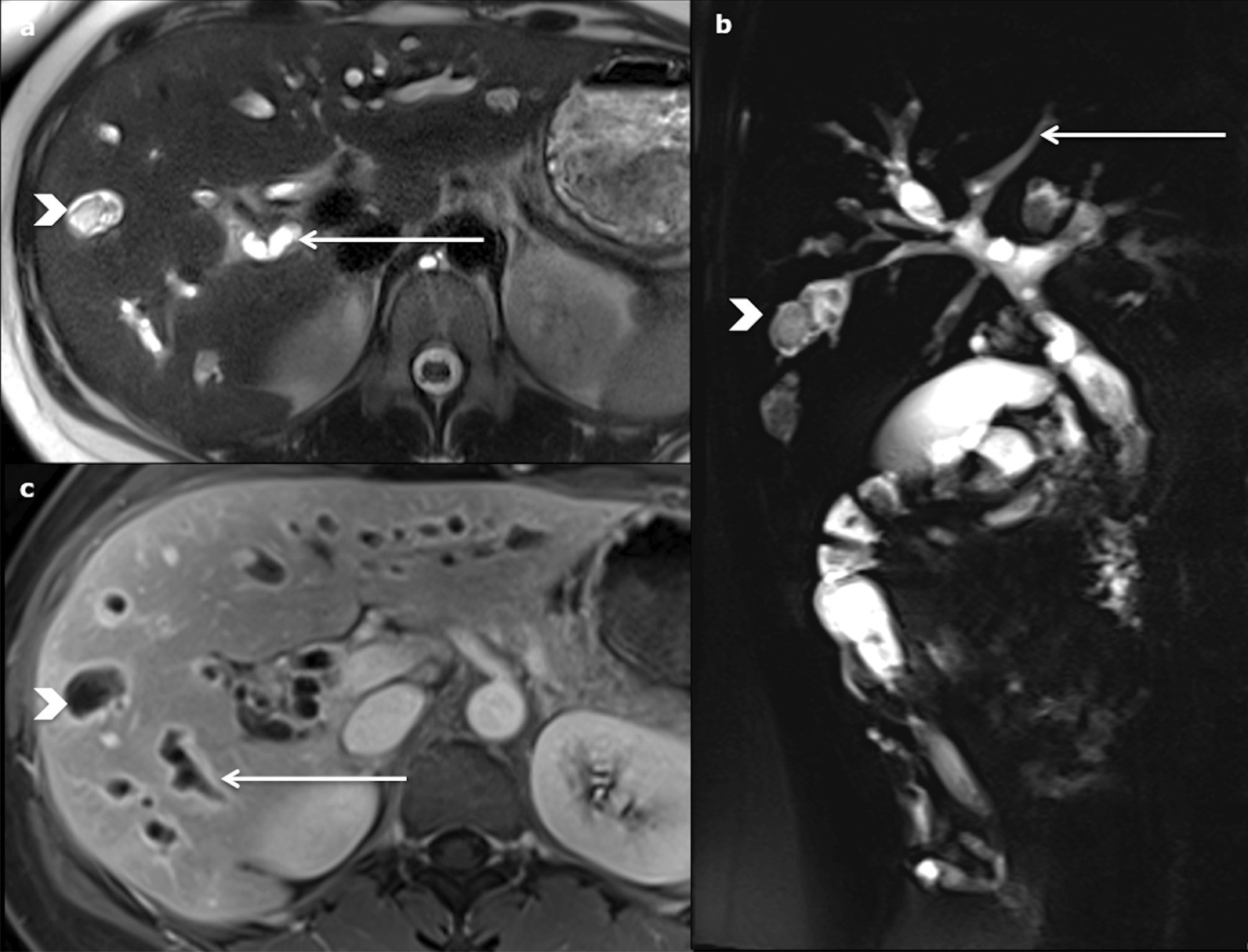 Cystic liver
lesions: a pictorial review. Caroli disease in a 24-year-old male. a Axial magnetic resonance imaging in T2 and (b) in T1 on portal venous phase show both fusiform (arrows) and connected round (arrowheads) dilatations, better depicted on magnetic resonance cholangiopancreatography images (c). There is no associated sign of fibrosis
insightsimaging.springeropen.com • CC-by-4.0

Caroli disease and Caroli syndrome are congenital disorders comprising of multifocal cystic dilatation of segmental intrahepatic bile ducts. Caroli disease is limited to the dilatation of larger intrahepatic bile ducts, whereas Caroli syndrome describes the combination of small bile ducts dilatation and congenital hepatic fibrosis. However, some series show that extrahepatic duct involvement may exist. They are also classified as a type V choledochal cyst, according to the Todani classification.

Presentation is in childhood or young adulthood. Caroli disease presents with right upper quadrant pain, recurrent cholelithiasis, and cholangitis with fever and jaundice. Caroli syndrome presents with the previous symptoms along with signs of portal hypertension, including hematemesis and melena secondary to bleeding varices.

Pathologically, Caroli disease and Caroli syndrome belong to the spectrum of fibropolycystic liver disease which results from in utero malformation of the ductal plate . There is a high association with fibrocystic anomalies of the kidneys which share the same genetic defect (PKHD1 gene, chromosome region 6p21) .

The ductal plate is a layer of hepatic precursor cells that surround the portal venous branches and is the anlage of the intrahepatic bile ducts. The manifestation of ductal plate malformation depends on the level of the biliary tree that is affected .

Thus, Caroli disease (the simple type) results from the abnormal development of the large bile ducts.

In contrast, in Caroli syndrome (the periportal type of Caroli disease), both the central intrahepatic bile ducts and the ductal plates of the smaller peripheral bile ducts are affected, with the latter leading to the development of fibrosis.

At the other end of the fibropolycystic disease spectrum are von Meyenburg complexes, also known as biliary hamartomas which result from discrete foci of ductal plate malformation affecting the smallest bile ducts .

The disease may be diffuse, lobar or segmental. Dilatation is most frequently saccular rather than fusiform, a feature that might help in the differential diagnosis.

Intrahepatic bile ducts can have a beaded appearance on HIDA scans .

Prognosis is generally poor. If the disease is localized, segmentectomy or lobectomy may be offered. In diffuse disease management if generally with conservative measures; liver transplantation may be an option .