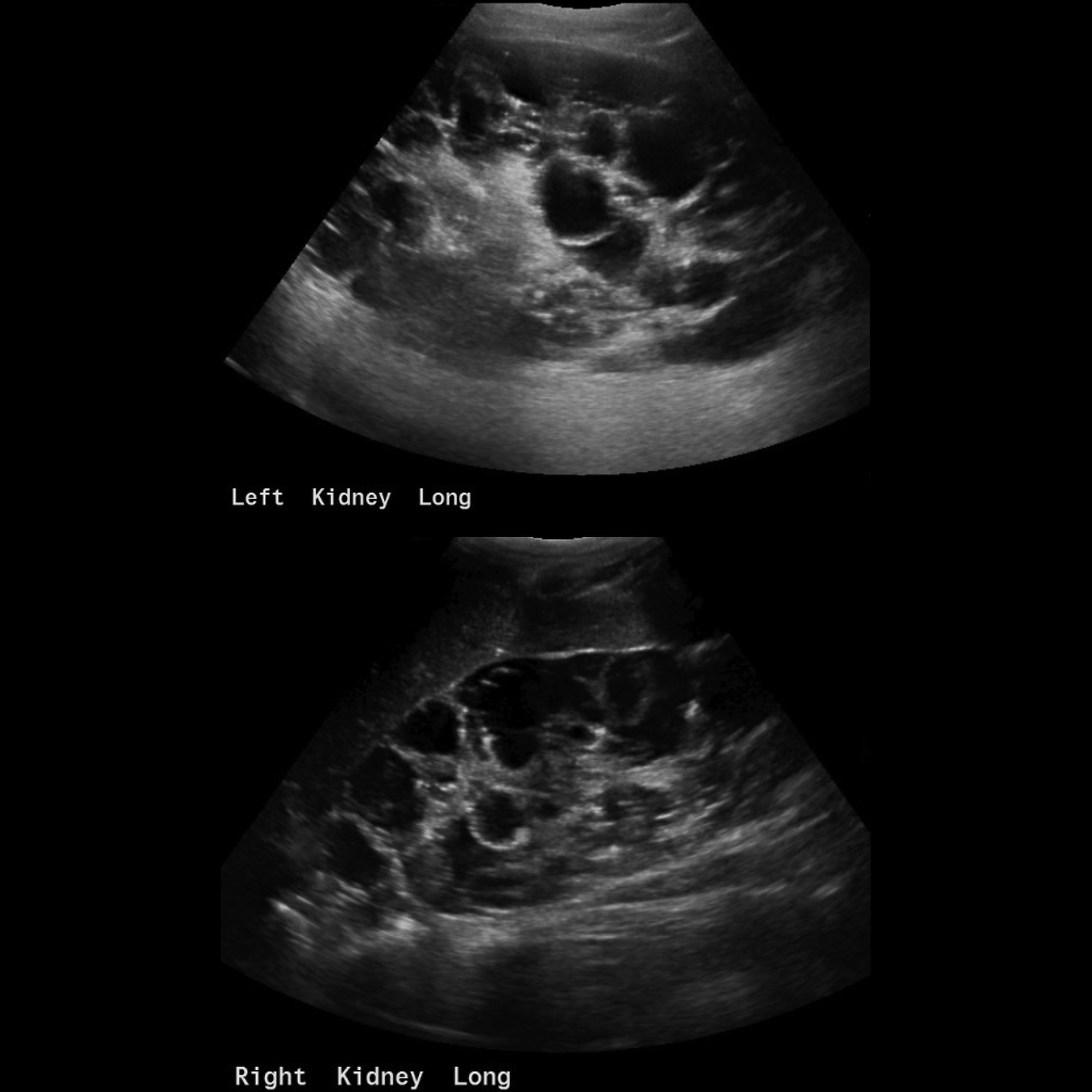 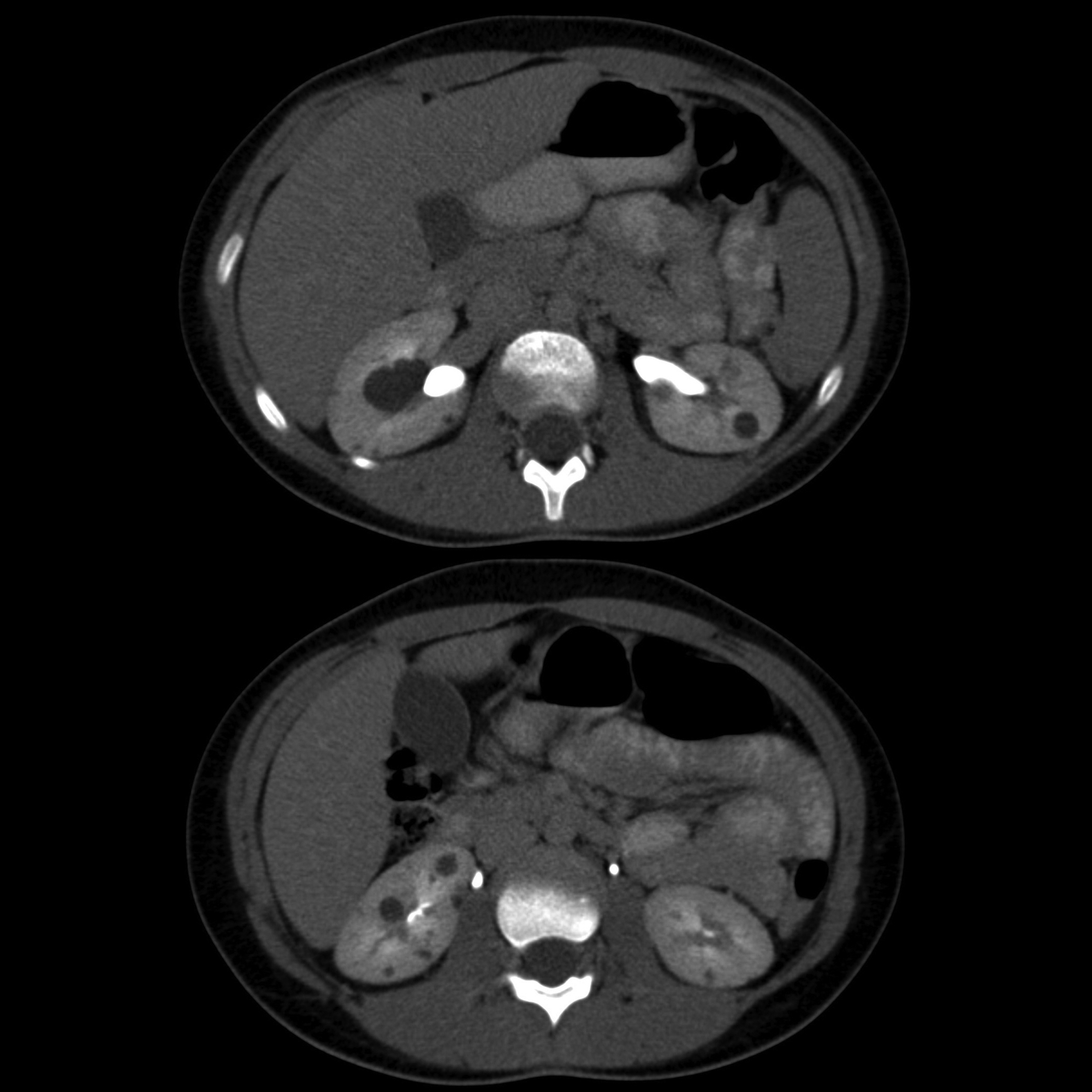 Abdominal CT
scan of an adult with autosomal dominant polycystic kidney disease. Extensive cyst formation is seen over both kidneys, with a few cysts in the liver as well.
Wikipedia • CC BY-SA 3.0
Hallo!
Radiopaedia • CC-by-nc-sa 3.0 • de

Autosomal dominant polycystic kidney disease is one of the most common serious hereditary diseases, found in 1:400 to 1:1000 individuals, and by far the most common hereditary cause of end stage renal failure (ESRF) . It accounts for 4-10% of all cases of ESRF .

Clinical presentation is variable and includes :

Macroscopically the kidney demonstrates a large number of cysts of variable size (from a few mm to many cms), in both the cortex and medulla. They are filled with fluid of variable color (from clear or straw colored to altered blood or chocolate colored to purulent when infected).

A number of conditions are well recognized as being associated with ADPKD :

The majority of cases are inherited in an autosomal dominant fashion. In a minority of cases, no family history is present, and the disease is due to a spontaneous mutation .

Two genes have been identified, with slightly different phenotypes :

A third rare type of ADPKD (termed ADPKD 3) has been described, however, the gene has yet to be identified .

The defect results in cystic dilatation of the renal tubules (of all parts of the nephron) in a minority of nephrons. The cysts are variable in size and result in compression of the remainder of the kidney, resulting in increased renin and erythropoietin secretion, and gradual renal dysfunction.

Imaging of patients with autosomal dominant polycystic kidney disease can be challenging, simply due to the size and number of the cysts and associated mass effect on adjacent structures. It is potentially tedious, but necessary, to assess all cysts for atypical features, that may reflect complications (e.g. hemorrhage or infection) or malignancy (i.e. renal cell carcinoma) .

Plain films have no role in the surveillance of patients with established ADPKD. The diagnosis may be suspected when the renal outlines are enlarged, multilobulated or difficult to discern, with associated displacement of loops of bowel.

Multiple calcifications may be seen which may have multiple ring configurations.

Ultrasound is an excellent choice for repeated imaging as it is fast, relatively inexpensive and lacks ionizing radiation. It is able both to suggest the diagnosis and to assess for cyst complications.

Cysts with hemorrhage or infection will demonstrate echogenic material within the cyst, without internal blood flow. Calcification may develop. Renal cell carcinomas in contrast, although usually cystic in the setting of ADPKD, will have solid components of thick septa with blood flow.

Perinephric hematomas may be visible and collections of variable echogenicity surrounding the kidney.

Additionally, ultrasound is also able to visualize cysts in other abdominal organs.

CT is of course very sensitive to the diagnosis and excellent at characterizing renal cysts. Simple cysts appear as rounded structures with near water attenuation (~ 0 HU). The wall is very thin and regular, and are often imperceptible.

Cysts which have had internal complications may be hyperattenuating, with internal non-enhancing septations and/or calcifications.

A complex cystic mass with solid components or thick septa which enhance should be viewed with suspicion, and presence of a renal cell carcinoma (RCC) suspected (see Bosniak classification of renal cysts).

ESRF requiring transplant or dialysis eventually develops in many patients (45% by the age of 60). Patients with PKD1 mutations are more likely to progress to ESRF and often do so at an earlier age .

Complications may be both local (i.e. of the kidney) or of other organ systems.

Unlike in some other congenital cystic kidney diseases, there is no increased risk for renal cell carcinoma (RCC) unless the patient is undergoing prolonged dialysis .