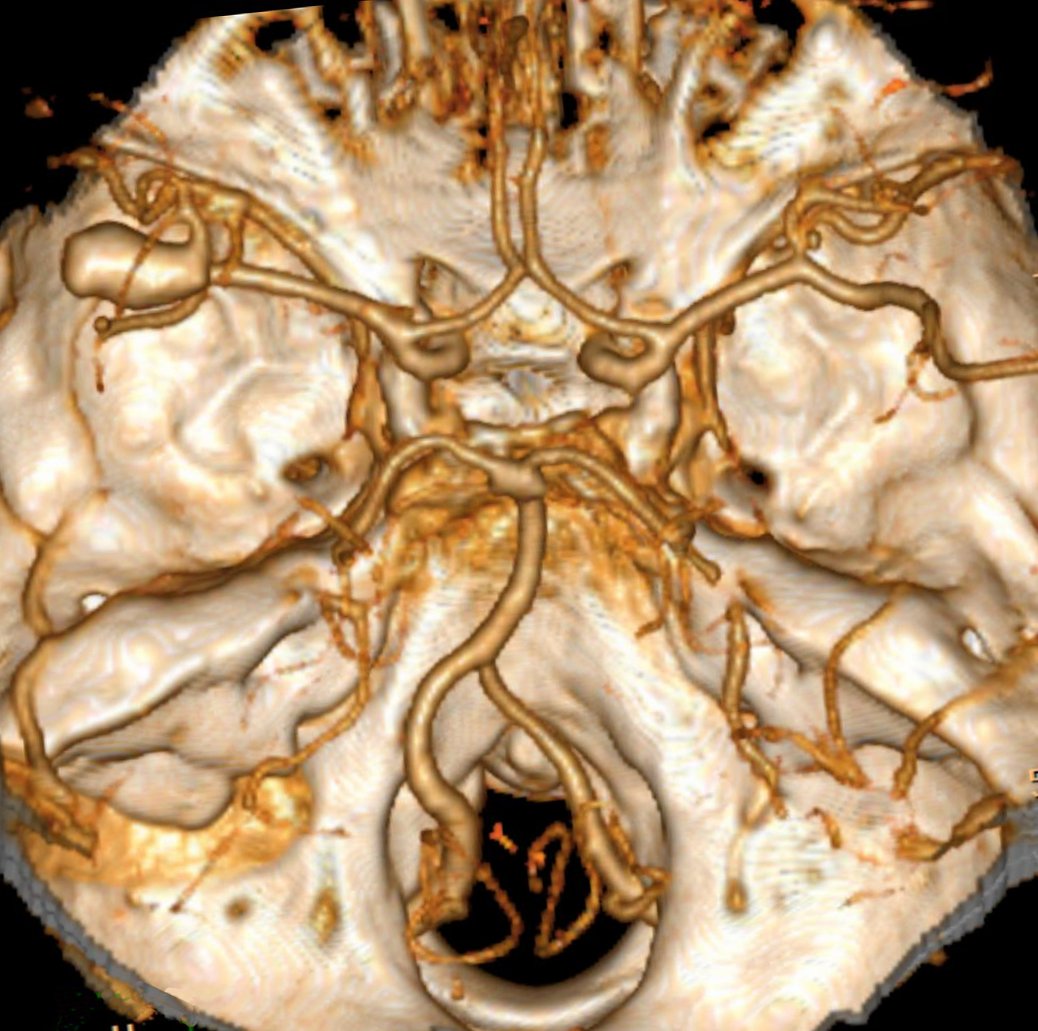 Those larger than 25 mm in the maximal dimension are called giant cerebral aneurysms.

Charcot-Bouchard aneurysms are minute aneurysms which develop as a result of chronic hypertension and appear most commonly in the basal ganglia and other areas such as the thalamus, pons, and cerebellum, where there are small penetrating vessels (diameter <300 micrometers).

Prevalence of saccular cerebral aneurysms in the asymptomatic general population has been reported over a wide range (0.2-8.9%) when examined angiographically, and in 15-30% of these patients, multiple aneurysms are found .

A familial tendency to aneurysms is also well recognized, with patients who have more than one first-degree relative affected, having a ~30% (range 17-44%) chance of themselves having an aneurysm .

Most intracranial aneurysms are true aneurysms. The aneurysmal pouch is composed of thickened hyalinised intima with the muscular wall and internal elastic lamina being absent as the normal muscularis and elastic lamina terminate at the neck of an aneurysm. As an aneurysm grows it may become irregular in outline, and may have mural thrombus. Typically rupture occurs from dome .

Numerous associations have been identified, most relating to abnormal connective tissue. Associations include:

Cerebral aneurysms typically occur at branch points of larger vessels but can occur at the origin of small perforators which may not be seen on imaging. Approximately 90% of such aneurysms arise from the anterior circulation, and 15-30% of these patients have multiple aneurysms .

Berry aneurysms can be imaged in a variety of methods:

Each of these confers certain advantages and disadvantages, although in general digital subtraction catheter angiography, especially with 3D acquisitions, is considered the gold standard in most institutions.

The appearance depends upon the presence of thrombosis within an aneurysm. An aneurysm appears as a well-defined round, slightly hyperattenuating lesion, most apparent on maximum intensity projection reformatted images.

It has been reported more sensitivity in 3D DSA over 2D DSA when regarding the detection of small aneurysms . Attention must be given when measuring the aneurysm neck size as it can be overestimated by the 3D reconstructions.

Treatment of large or symptomatic aneurysms should be considered, with either endovascular coiling or surgical clipping.

Management of small aneurysms is controversial. Less than 7 mm in maximal diameter aneurysms are statistically unlikely to rupture, however, due to their prevalence, anyone working in the area has seen numerous patients with small aneurysms which have ruptured resulting in subarachnoid hemorrhage, often with devastating consequences.

As such management will vary according to local experience, the location and appearance of an aneurysm, patient demographics, etc.

When the abnormality has been confirmed to be vascular, the differential includes:

Regardless of the modality used, a number of features need to be assessed to allow a decision in relation to treatment to be made: