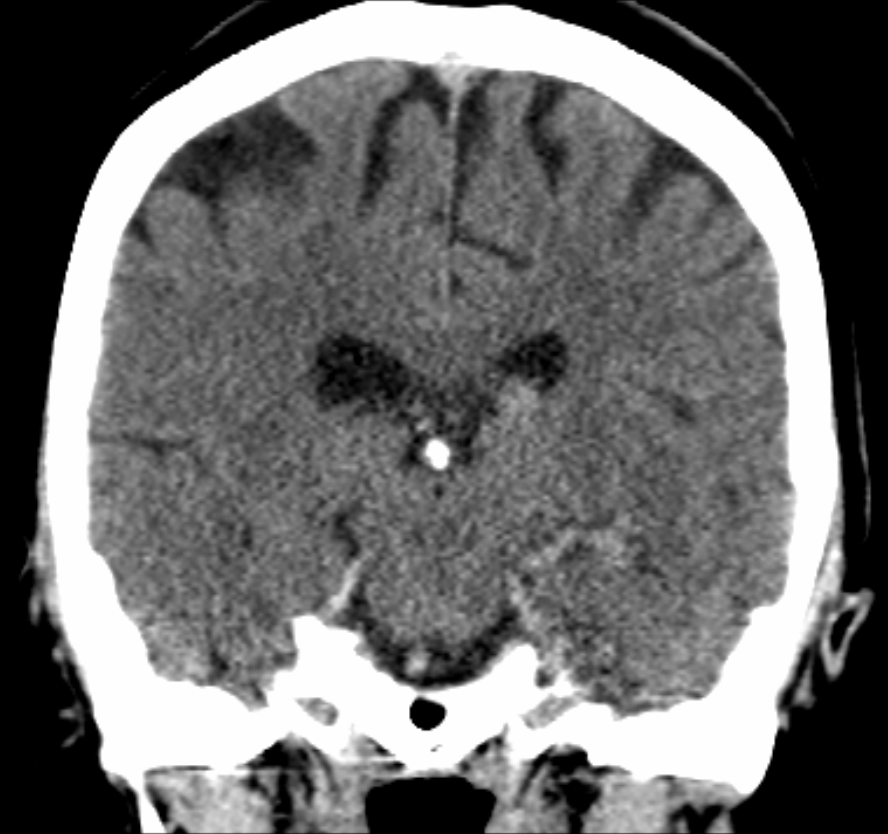 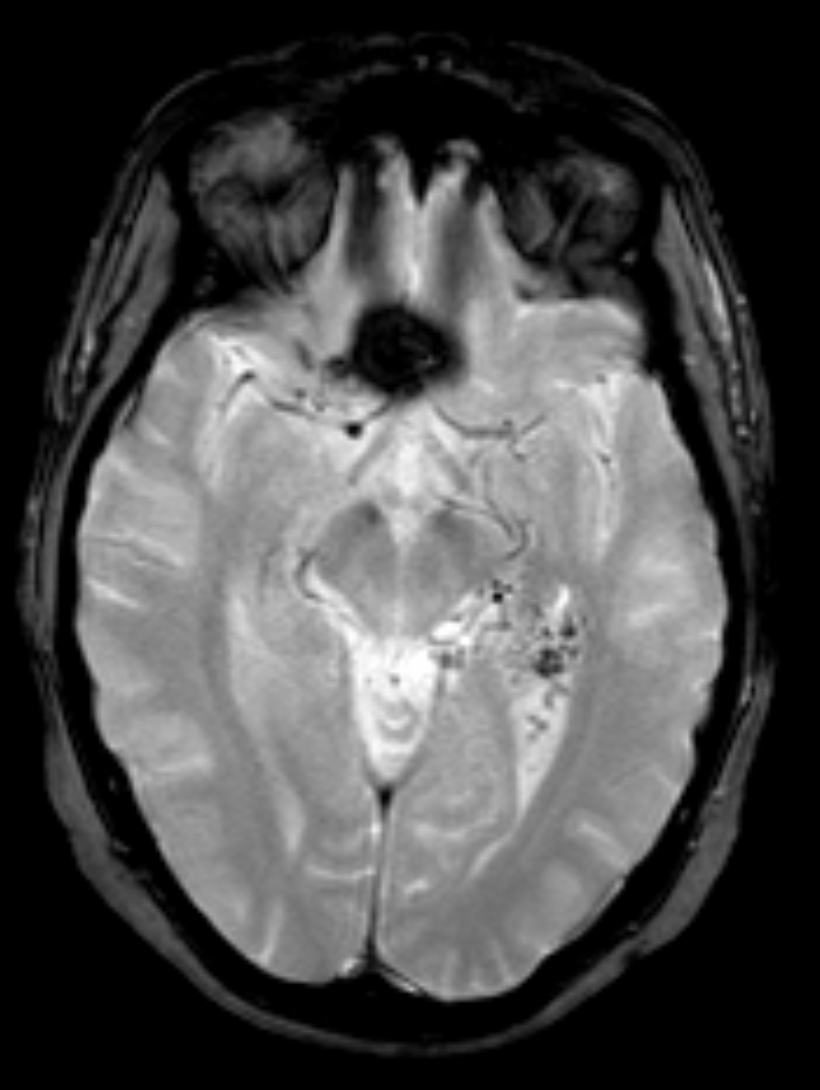 This image
is part of a series which can be scrolled interactively with the mousewheel or mouse dragging. This is done by using Template:Imagestack. The series is found in the category Cerebral arteriovenous malformation MRT TOF MIP Case 001. Arteriovenöse Malformation im Gehirn: MRT TOF gedrehte MIP-Projektion
Wikipedia • CC BY 3.0 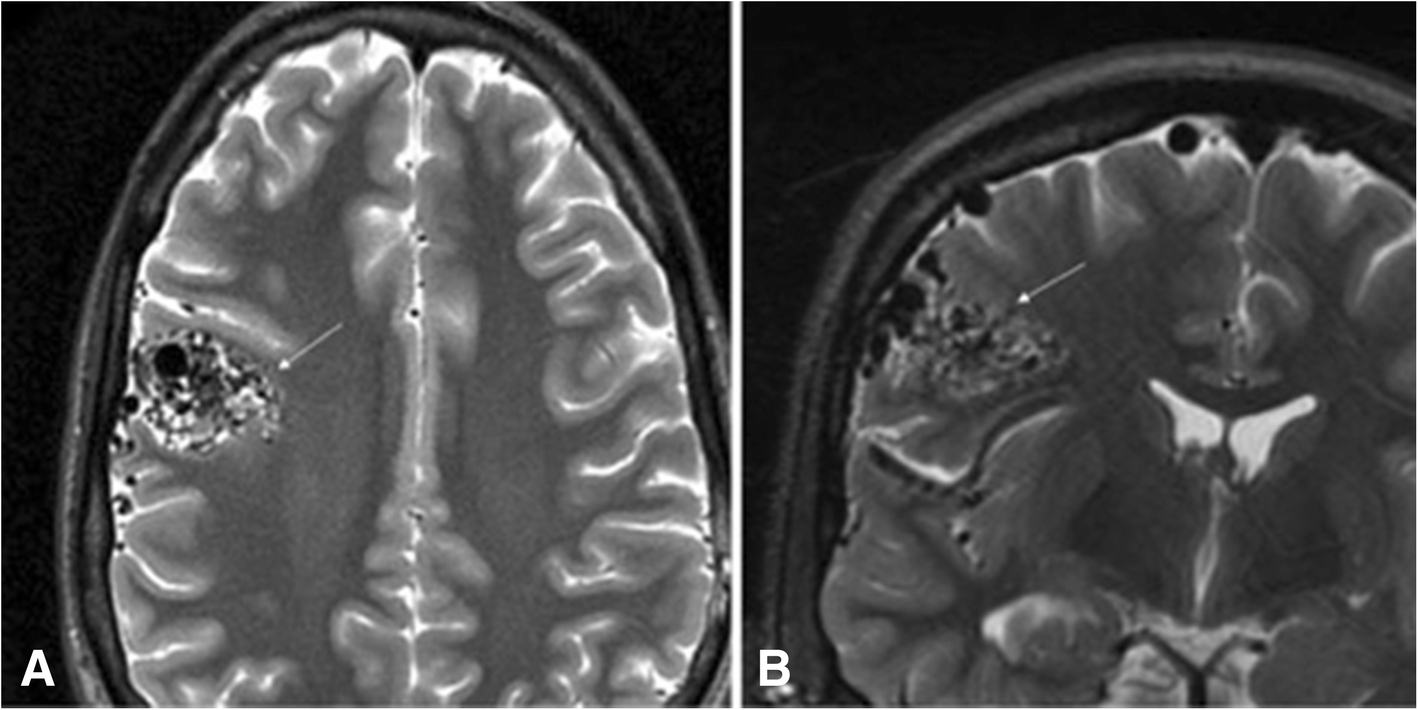 These malformations are characterized by a nidus forming the transition between the feeding artery and draining vein. If this transition is made directly, then it is considered an arteriovenous fistula, which is a separate type of cerebral vascular entity.

Although arteriovenous malformations are thought to represent a congenital abnormality, they are rarely found incidentally in the very young and are thought to expand over time. Despite this, a third of arteriovenous malformations that are diagnosed due to hemorrhage are identified before the age of 20 years . Overall, they are diagnosed at a mean age of 31 years .

Arteriovenous malformations are thought to occur in approximately 4% of the population but become symptomatic in only 12% of affected individuals . There is no gender predilection .

AVMs tend to be solitary in the vast majority of cases (>95%). When multiple, syndromic associations must be considered, including:

Cerebral arteriovenous malformations are the most common symptomatic vascular malformations. Possible presentations include :

The origin of arteriovenous malformations remains uncertain, although they are thought to be multifactorial and often attributed to being congenital . Their development may involve dysregulation of vascular endothelium growth factor (VEGF) receptor-mediated endothelial proliferation and cytokine-mediated vessel remodeling.

The nidus is fed by one or more arteries and drained by one or more veins. The feeding arteries are enlarged due to the low resistance (as blood bypasses the capillary beds) and therefore increased flow, which may lead to flow-related arterial aneurysms . Venous aneurysms, also referred to as venous pouches, may be seen as well. AVMs may contain dystrophic calcification, a small amount of gliotic tissue, or blood at different stages of aging.

Brain AVMs can be divided into two types :

The Spetzler-Martin AVM grading system relates morphology and location to the risk of surgery.

Diagnosis can be difficult on non-contrast CT. The nidus is blood density and therefore usually somewhat hyperdense compared to adjacent brain. Enlarged draining veins may be seen. Although they might be very large in size, they do not cause any mass effect unless they bleed.

Following contrast administration, and especially with CTA, the diagnosis is usually self-evident, with feeding arteries, draining veins, and intervening nidus visible in the so-called "bag of worms" appearance. The exact anatomy of feeding vessels and draining veins can be difficult to delineate, so angiography remains necessary.

Cerebral angiography remains the gold standard, able to exquisitely delineate the location and number of feeding vessels and the pattern of drainage. Ideally, angiography is performed in a bi-plane system with a high rate of acquisition, as shunting can be very rapid.

On angiography, an AVM appears as a tightly packed mass of enlarged feeding arteries that supply a central nidus. One or more dilated veins drain the nidus and abnormal opacification of veins occurs in the arterial phase (early venous drainage), represents shunting.

Radiology reports should include certain key points that help the clinician in deciding the management.  Radiological evidence of previous hemorrhage, intranidal aneurysm, ectasia or stenosis of draining veins, single draining vein or deep draining vein, or deep or posterior fossa location of AVM is associated with a high risk of future hemorrhage.

Treatment options and rate of complications are dictated in part by the Spetzler-Martin grade. In general, the three options available are:

Occasionally, arteriovenous malformations have been known to spontaneously resolve , usually in the setting of intracranial hemorrhage, resulting presumably in venous compression and thrombosis. The annual risk of hemorrhage for an untreated arteriovenous malformation is 2-3%, resulting from a flow-related aneurysm, intra-nidal aneurysm, or venous thrombosis (rarely).

Following hemorrhage, the risk of a further bleed in the next 12 months is up to 18% .