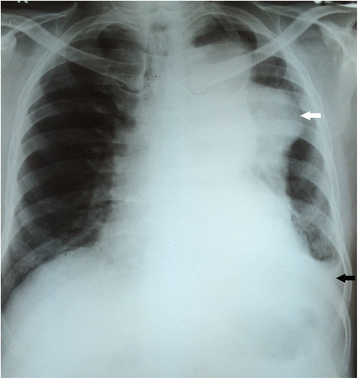 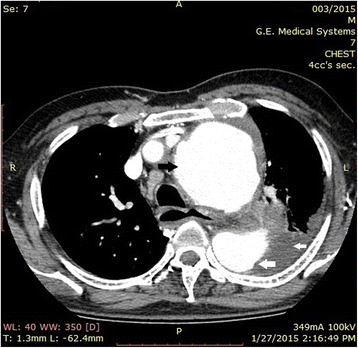 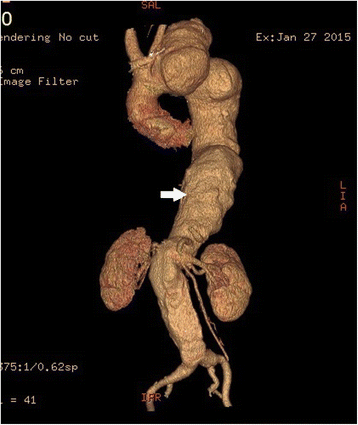 Thoracic aortic aneurysms are relatively uncommon compared to abdominal aortic aneurysms. There is a wide range of causes, and the ascending aorta is the segment most commonly affected. Both CTA and MRA are the modalities of choice to image this condition.

The normal aortic diameter varies based on age, sex, and body surface area. In general, the term aneurysm is used when the axial diameter is >5.0 cm for the ascending aorta and >4.0 cm for the descending aorta . When enlarged above normal but not reaching aneurysmal definition, the terms dilatation/ectasia can be used .

Thoracic aneurysms are often identified incidentally on imaging of the chest. The symptomatic presentation may be due to mass effect on airway or esophagus. Alternatively, they may present due to a complication, including rupture, aorto-bronchial or aorto-esophageal fistulae.

Pseudoaneurysms of the thoracic aorta are usually the result of significant thoracic trauma, both penetrating and blunt, and carry a very high mortality, with 80-90% of patients dying before reaching hospital .

Aneurysmal dilatation can affect any part of the thoracic aorta. Relative frequencies are (with some involving more than one segment) :

Thoracic aortic aneurysms can be divided pathologically according to their relationship to the aortic wall :

The location and shape of thoracic aortic aneurysms are variable. An aortic aneurysm, as aneurysms elsewhere, can be described as saccular or fusiform. In the case of fusiform dilatation, the term aneurysm should be applied when the diameter is >4 cm .

The thoracic aorta can usually be seen on both frontal and lateral chest radiographs, and aneurysms are often obvious. However, it is difficult to assess size accurately (due to magnification effects and often poor visualization on the side of the artery).

Unlike abdominal aneurysms that can usually be readily assessed and monitored with ultrasound, thoracic aortic aneurysms are encased in bone and air making transthoracic ultrasound of no use.

Transesophageal echocardiography can visualize much of the descending aorta, but due to its invasive nature is not routinely used.

CTA is the work-horse of aneurysm assessment able to rapidly image the relevant vascular territory with high resolution. It can visualize both the sac and the lumen and detect potential complications.

Typically aneurysms appear as dilatations of the lumen. The walls may be thin or thickened by the presence of a mural thrombus (circumferential or more frequently eccentric).

Calcified atherosclerotic disease is often identified not only in the wall of an aneurysm but adjacent arteries.

If rupture or leak has occurred hematoma/fluid may be seen adjacent to the aorta, in the left pleural cavity or the pericardium .

Although angiography has long been considered the gold standard for vascular imaging, it has largely been superseded by CTA and MRA, which can obtain 3D volumetric data, and able to assess the extraluminal soft tissues.

Angiography is however used during endovascular repair.

MRI has the advantage of not requiring ionizing radiation or large volumes of iodinated contrast. This is particularly advantageous in young patients with connective tissue disorders. However, there are limitations in patients with pacemakers and those with reduced renal function (see nephrogenic systemic fibrosis).

Acquisitions capable of being reformatted in three dimensions are essential to allow for accurate luminal measurement .

Mild to moderate aneurysmal dilatation can usually be treated conservatively and monitored. When the diameter reaches 5-6 cm intervention is usually considered as the risk of rupture is significantly elevated . Treatment options include:

In general, when possible, endovascular repair is the treatment of choice, with reduced morbidity and mortality .

The majority of patients with thoracic aortic aneurysms either die of a direct complication of the aneurysm (rupture most frequently) or other cardiovascular complications . The main predictors of rupture are the size and speed of growth . The average growth of a thoracic aneurysm appears to be lower than that of abdominal aneurysms, typically in the order of 1-2 mm/year, and correlates with a better prognosis for thoracic aneurysms when controlled for size .