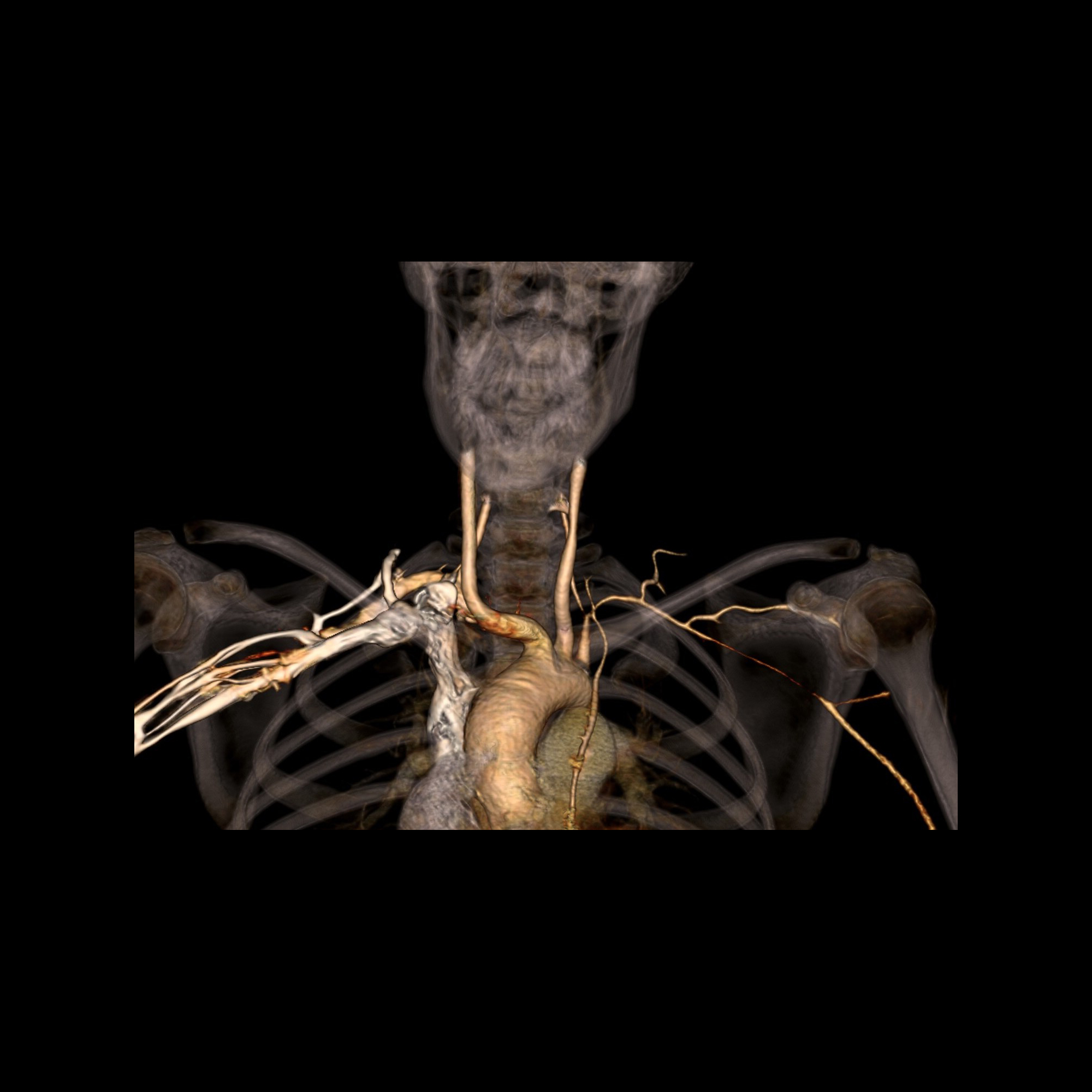 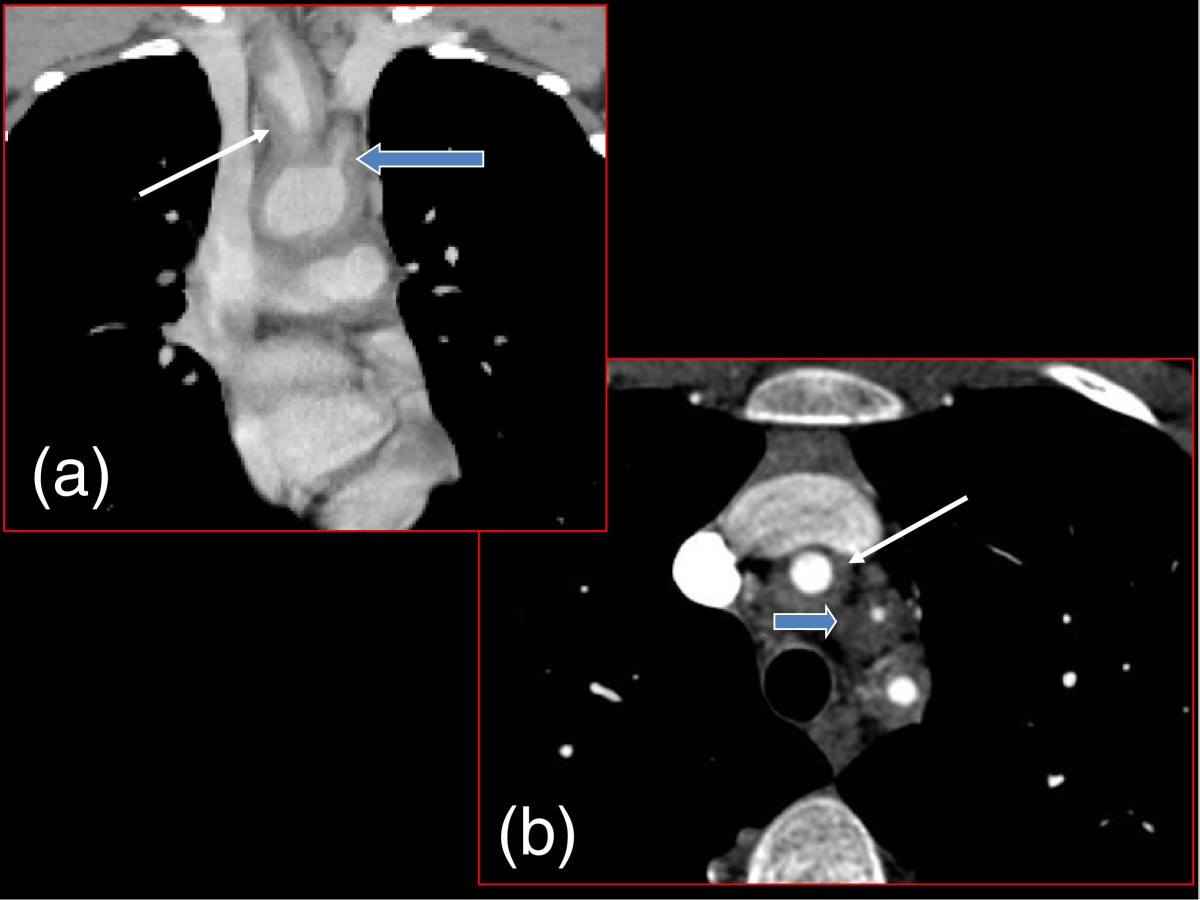 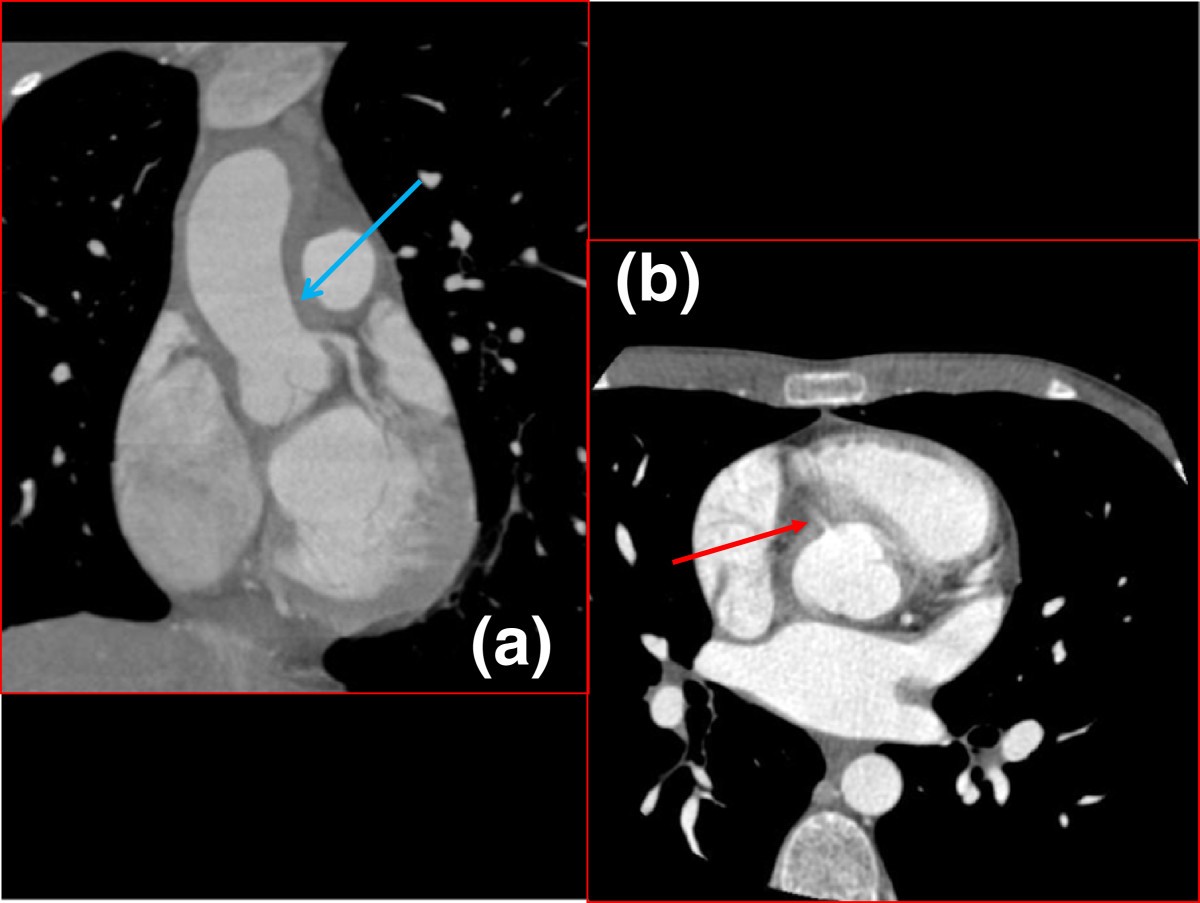 Coronary
artery involvement in pediatric Takayasu’s arteritis: Case report and literature review. Coronal (a) and Axial (b) Cardiac Gated CT Chest. Fifty percent narrowing of the origin of the left coronary artery is demonstrated by arrow in (a, blue arrow). The right coronary artery should also be visible in this coronal section but was not due to stenosis (a). It can be seen as a wisp coming off the ascending aorta in the axial image (b, red arrow).
ped-rheum.biomedcentral.com • CC-by-2.0 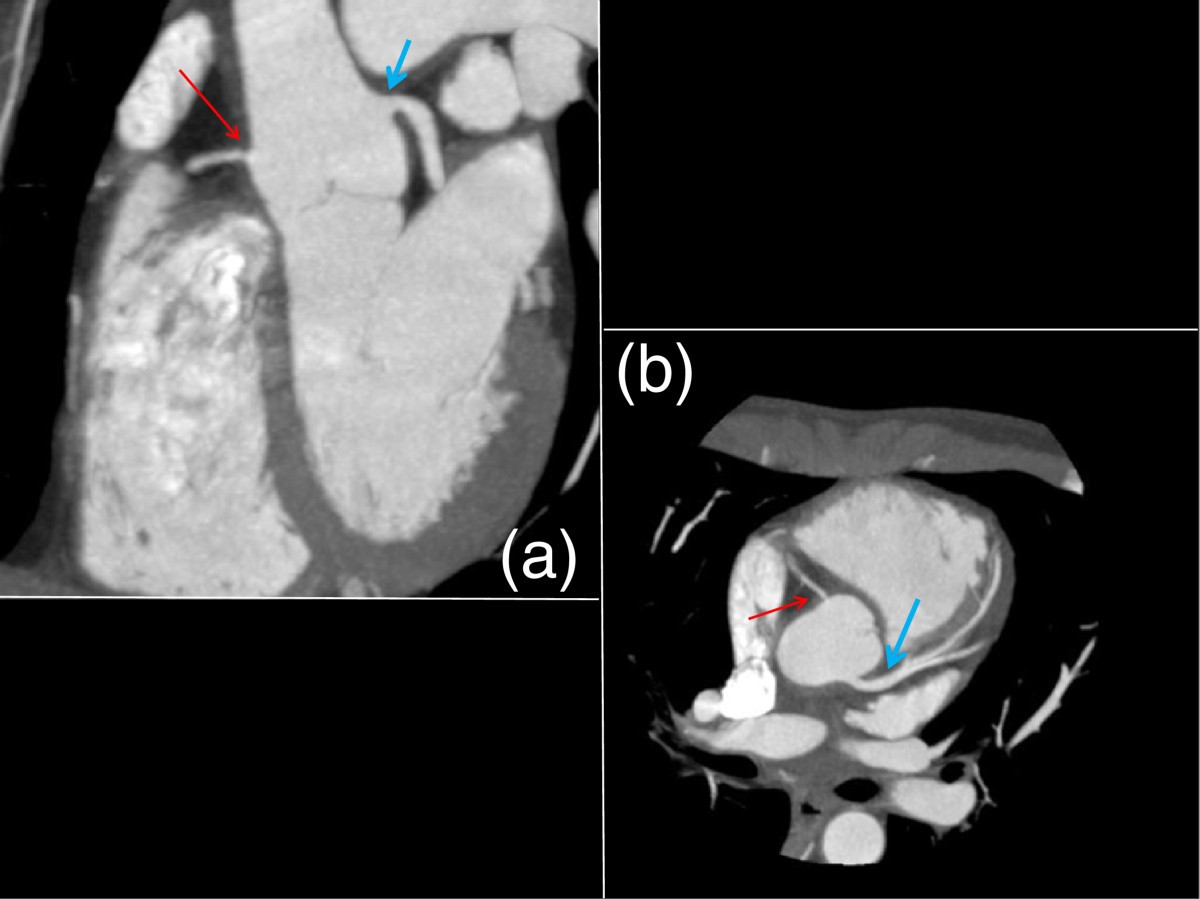 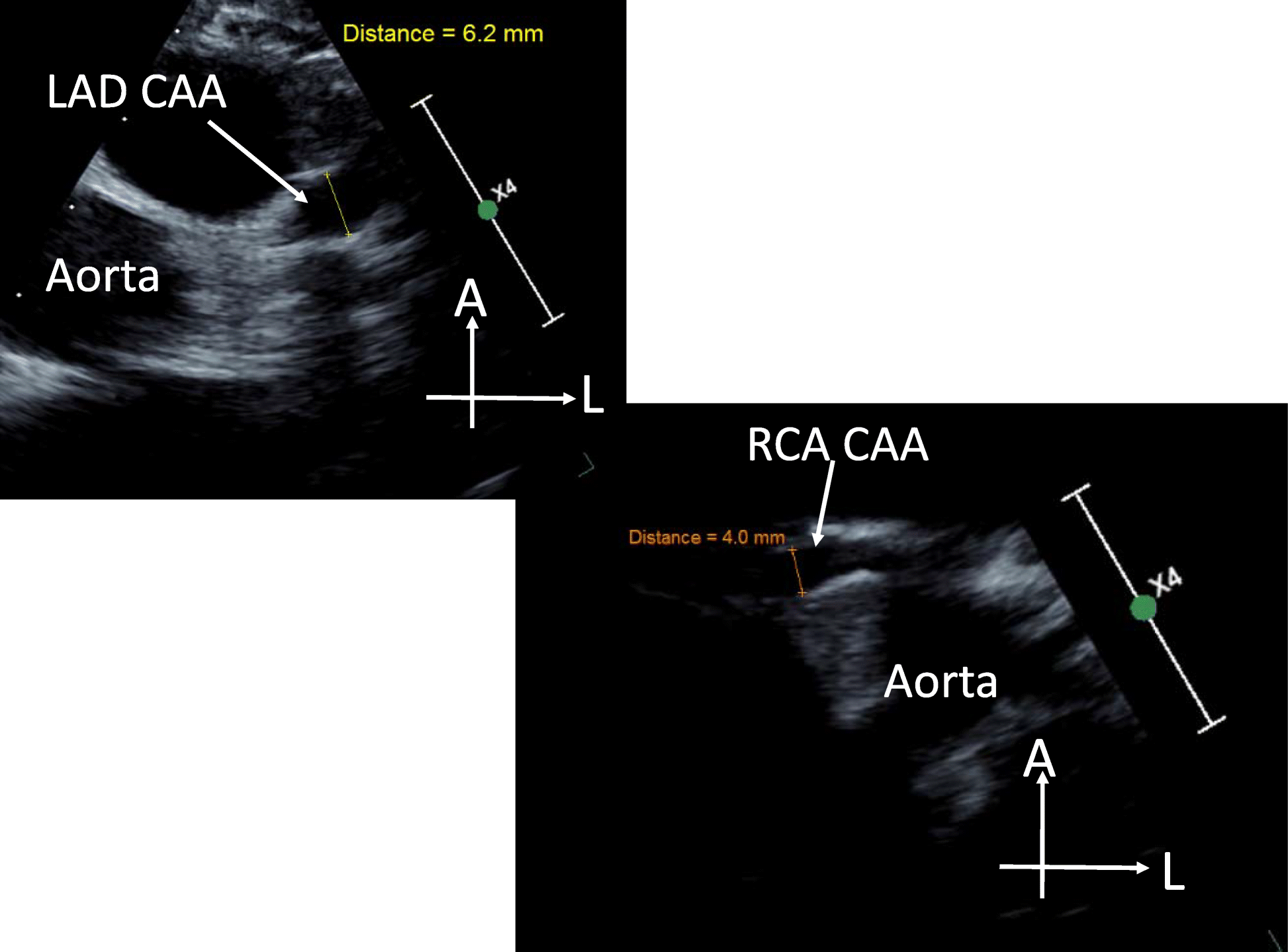 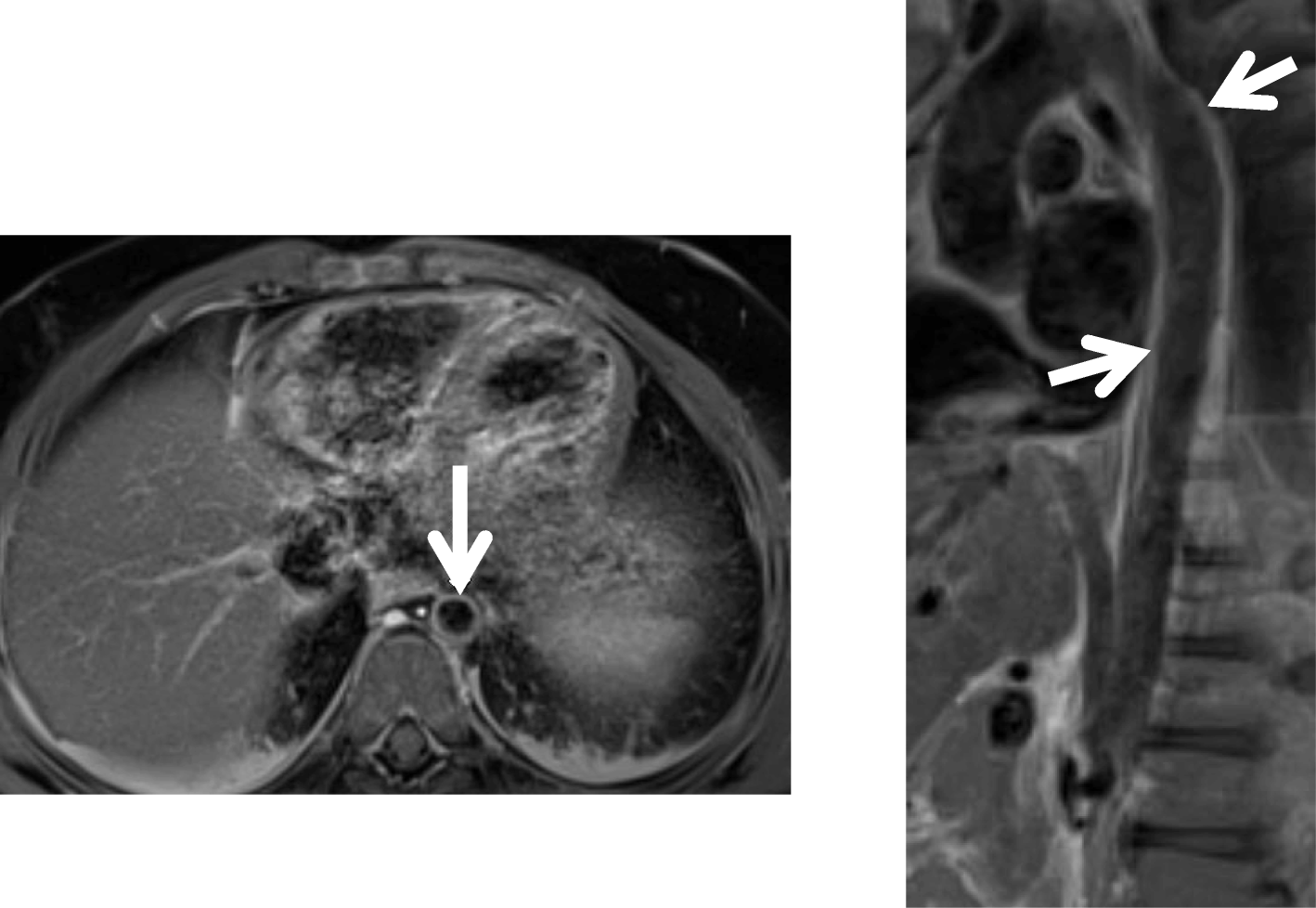 Takayasu arteritis (TA), also known as idiopathic medial aortopathy or pulseless disease, is a granulomatous large vessel vasculitis that predominantly affects the aorta and its major branches. It may also affect the pulmonary arteries. The exact cause is not well known but the pathology is thought to be similar to giant cell arteritis.

There is a strong female predominance (F: M ~ 9:1), an increased prevalence in Asian populations, and it tends to affect younger patients (<50 years of age). The typical age of onset is at around 15-30 years of age.

It induces clinically varied ischemic symptoms due to stenotic lesions or thrombus formation. The exact spectrum can be highly variable and dependent on the territory of vascular involvement.

There is segmental and patchy granulomatous inflammation of the aorta which results in stenosis, thrombosis and aneurysm formation. Half of the patients present with an initial systemic illness whereas the other 50% present with late-phase complications.

Two phases of the disease are classically described:

The initial systemic illness may include symptoms of malaise, fever, night sweats, weight loss and arthralgia. There is often anemia with raised inflammatory markers. This phase gradually resolves with the initiation of the chronic phase which is characterized by inflammatory and obliterative changes in the aorta and its branches. There are often reduced or absent peripheral pulses, giving rise to its alternative name of "pulseless disease".

Cardiac complications can occur in up to 60% of cases .

In some situations pulmonary arterial involvement can also occur

It has been classified based on location :

The pulmonary arteries are also commonly involved, with the most common appearance being peripheral pruning.

Described features on CTCA include:

Treatment is with systemic steroids and judicious use of angioplasty. Corticosteroids can be used for initial treatment. Other medical options include methotrexate, cyclophosphamide, and cyclosporine. Percutaneous angioplasty and bypass surgery should only be considered when there is no acute inflammation.

Prognosis tends to be variable ranging from a rapidly progressive disease in some reaching a quiescent stage in others.

The condition is named after Dr. Takayasu (Japanese ophthalmologist) who initially described similar vascular features on the retina in 1908.