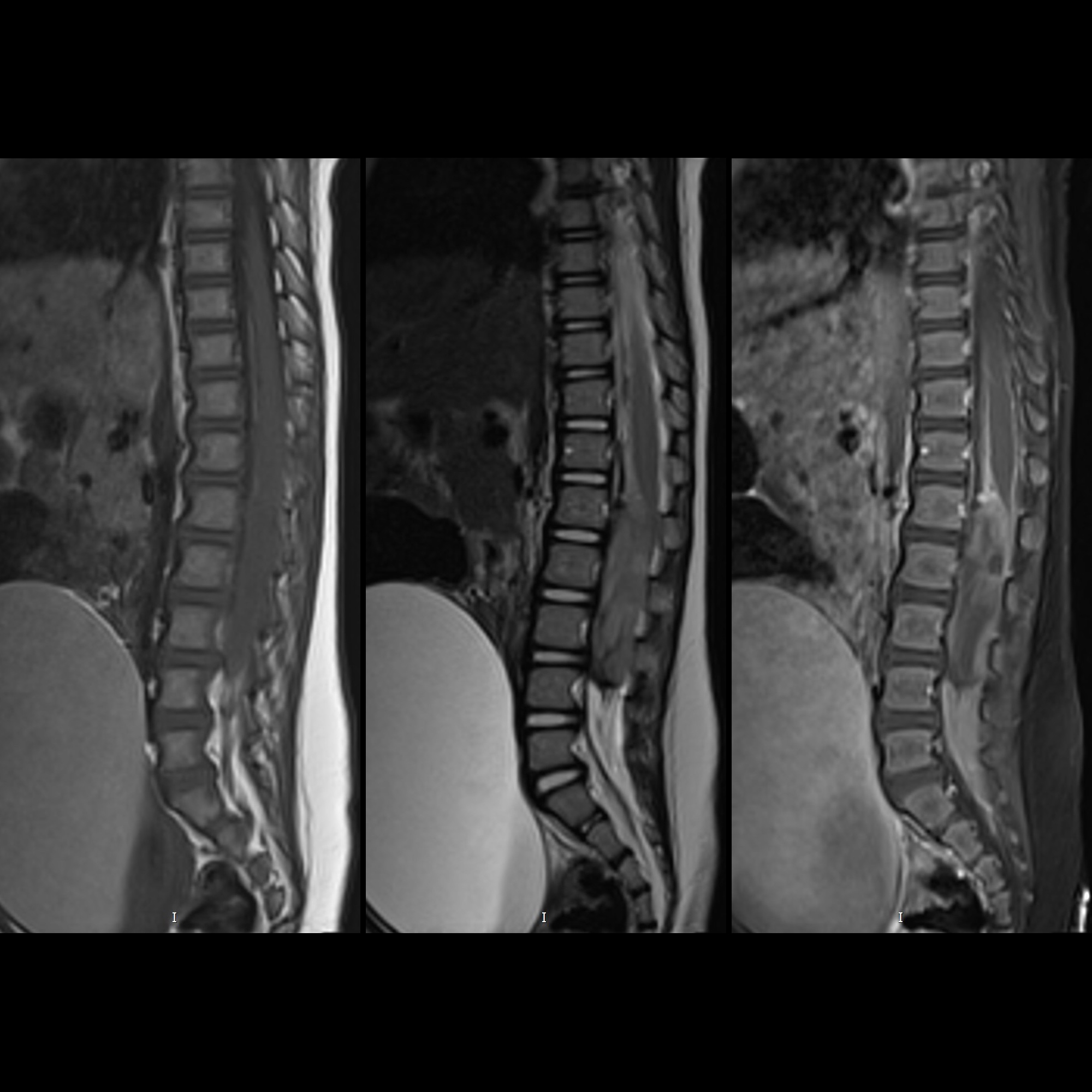 Toddler with
back pain and decreased weight bearing. Sagittal T1 without contrast (left), sagittal T2 (middle) and sagittal T1 with contrast (right) MRI of the lumbar spine shows an extramedullary intradural lesion that is inferior to the conus medullaris and fills the spinal canal from the level of the L1-L3 vertebral bodies. The lesion has heterogenous signal intensity on T2 and heterogenous enhancement with contrast.The diagnosis was atypical teratoid rhabdoid tumor.
pediatricimaging.org • CC-by-nc-sa 4.0 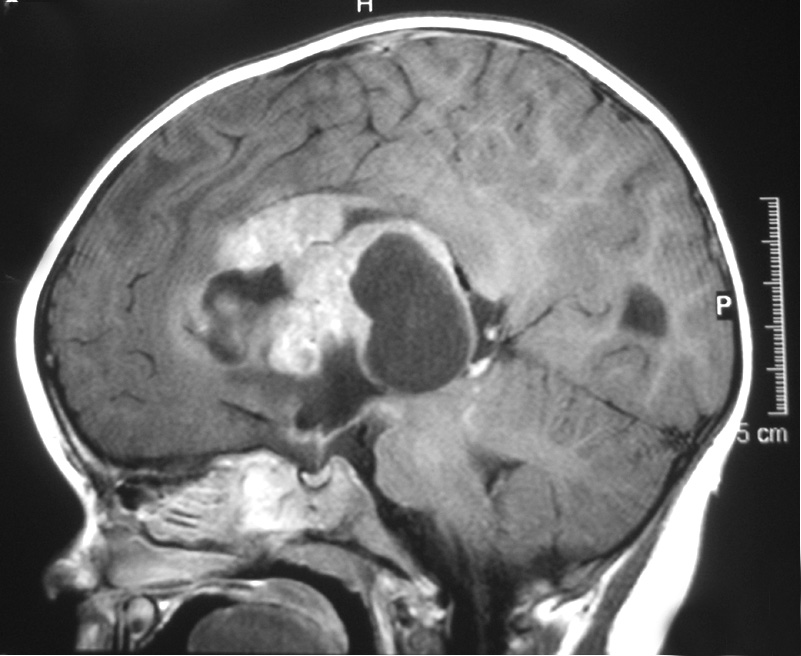 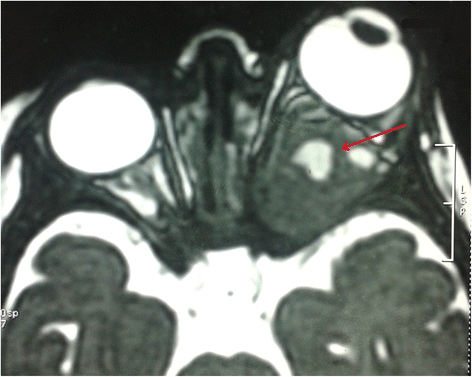 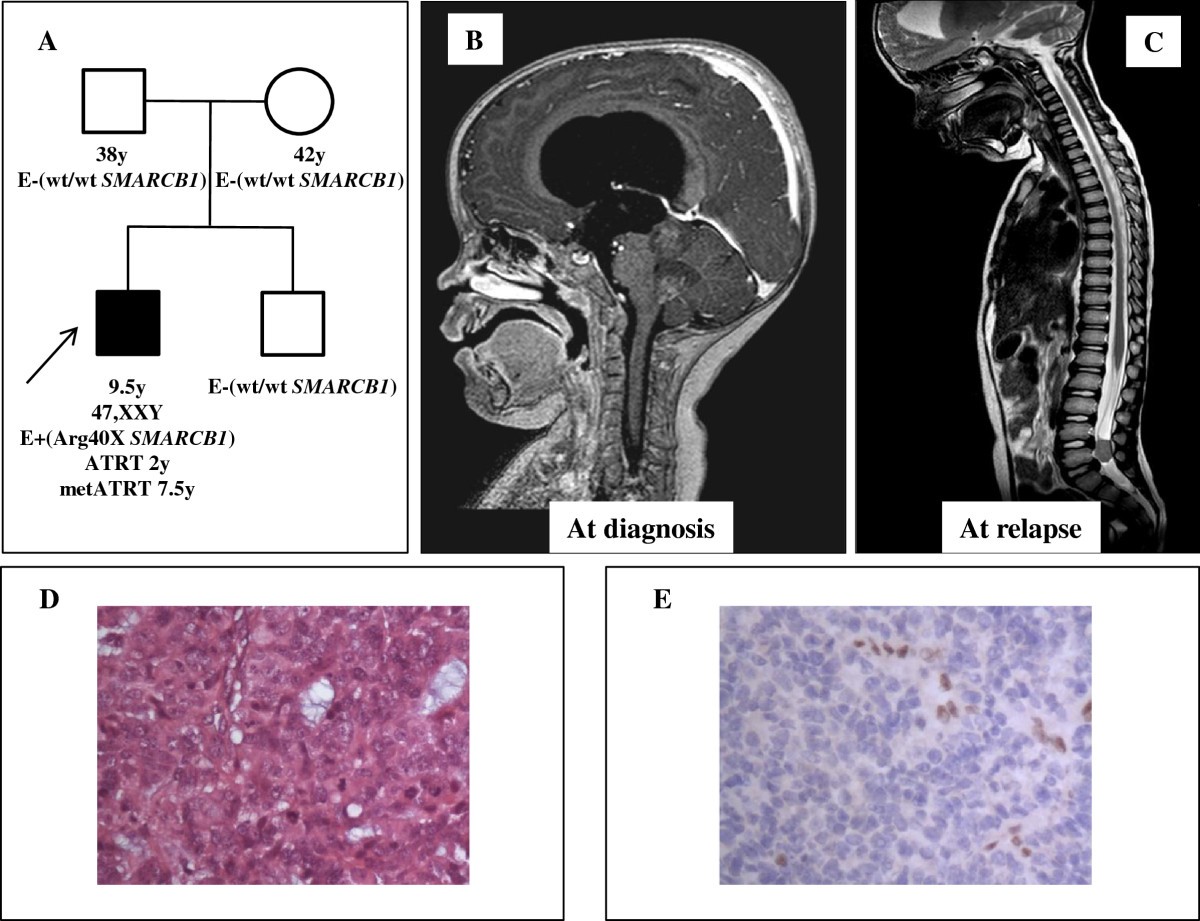 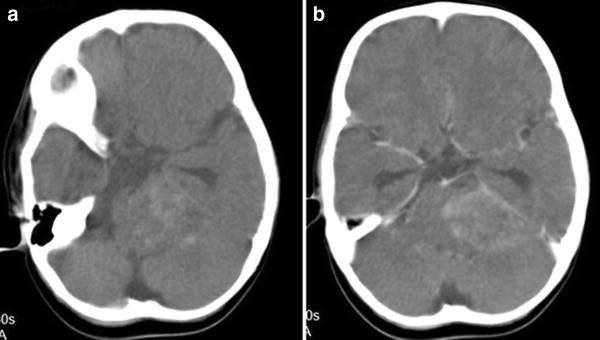 A rare cause
of infant facial paralysis: atypical teratoid rhabdoid tumour located in the cerebellopontine angle. a, b On CT images without contrast, isodense with the cerebellar parenchyma in the left CPA, amorphous calcifications including an extra-axial, dural-based mass lesion 4 × 3 cm in size, with heterogenous contrast after the application of IV contrast dye. Time there is concomitant calcification, bleeding and oedema of the surrounding
springerplus.springeropen.com • CC-by-4.0 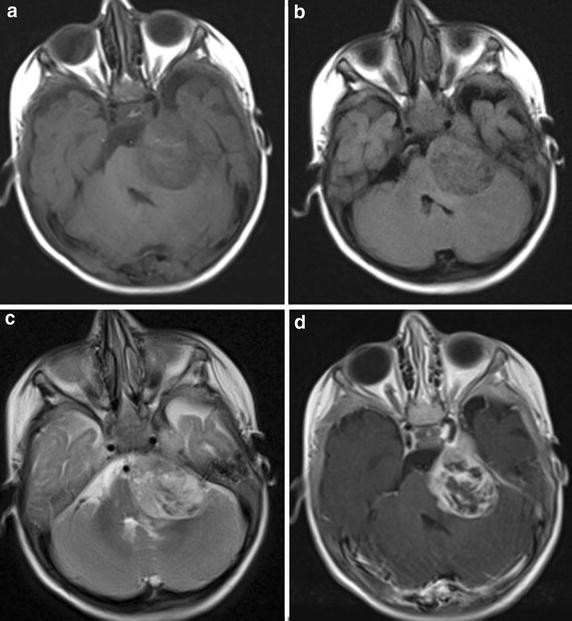 A rare cause
of infant facial paralysis: atypical teratoid rhabdoid tumour located in the cerebellopontine angle. a–d On the brain MRI, a dural-based, extra-axial mass lesion was observed on the left CPA, 4 × 3 cm in size, with heterogenous contrast after the application of IV contrast dye, which was heterogenous-hypointense on T1W and FLAIR sequences, heterogenous hyperintense on T2W, the mass appears to enter the cavernous sinus via Meckle’s cave. Time there is concomitant calcification, bleeding and oedema of the surrounding
springerplus.springeropen.com • CC-by-4.0 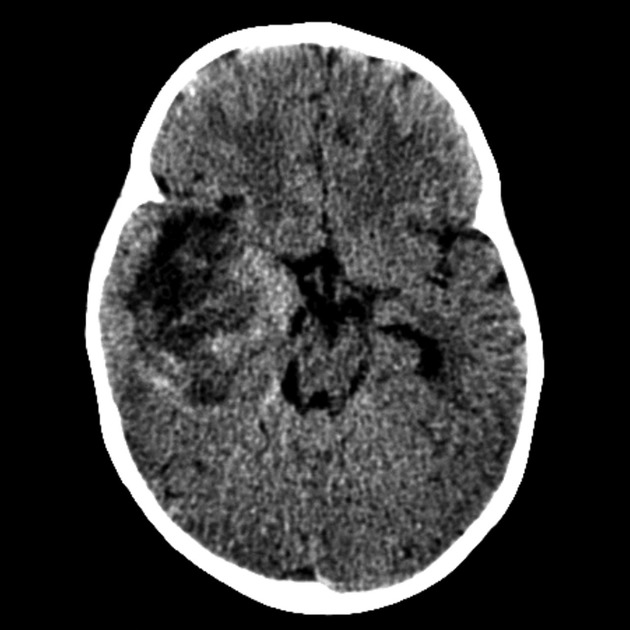 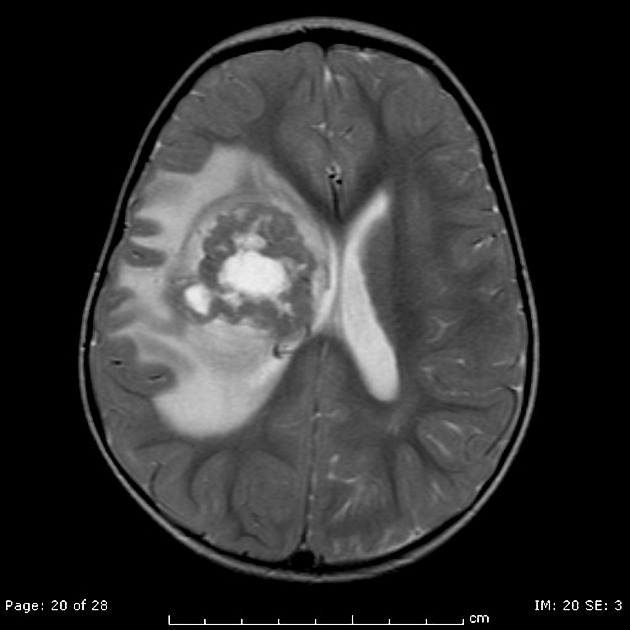 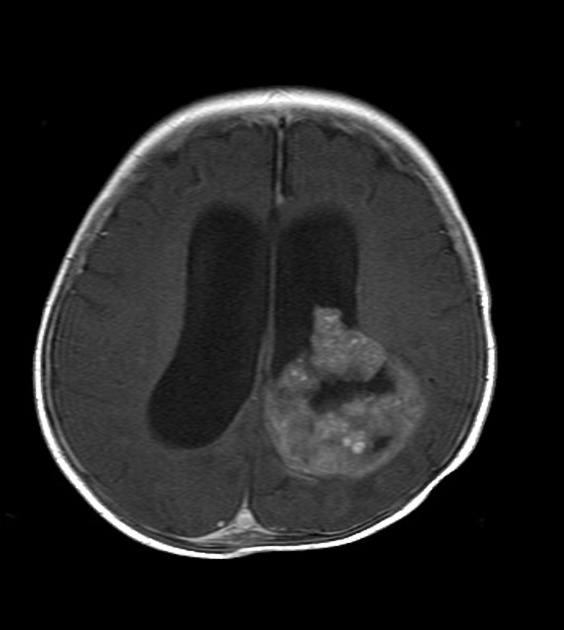 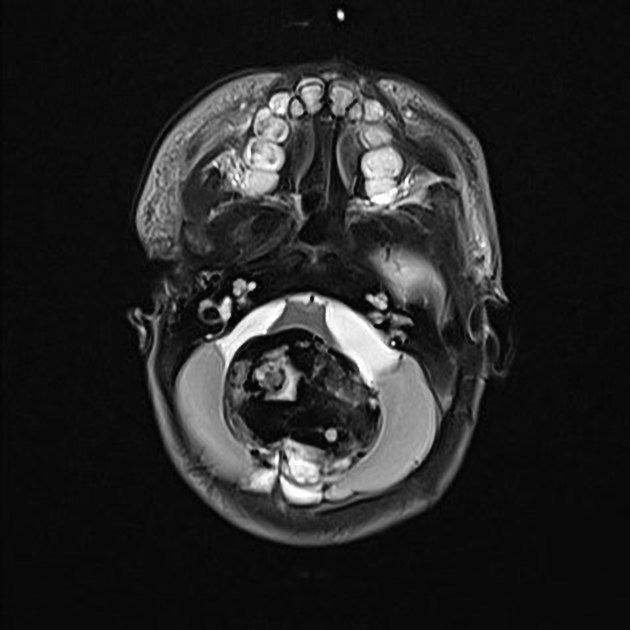 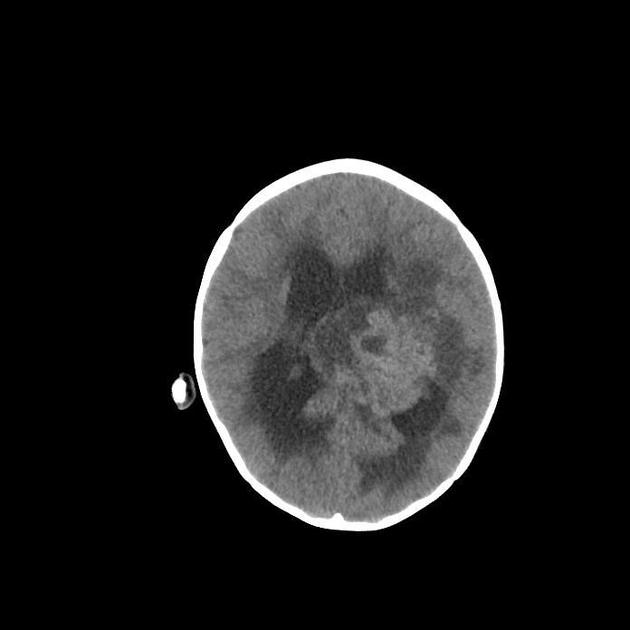 Atypical teratoid/rhabdoid tumors (AT/RT) are an uncommon WHO grade IV tumor, which in the vast majority of cases occurs in young children less than two years of age. It most frequently presents as a posterior fossa mass. AT/RT often resembles medulloblastoma by imaging and even H&E microscopy, and the diagnosis requires cytogenetic analysis of the tissue.

They present in young children (median age is less than 2-3 years ), whereas medulloblastomas typically occur in mid-childhood (median age 6 years).

Rhabdoid cells are the hallmark of AT/RT, but only comprise a fraction of the tumor. Other portions of the tumor are indistinguishable on imaging and histology from a medulloblastoma or embryonal tumor with multilayered rosettes.

According to 2016 WHO classification scheme, a diagnosis of AT/RT requires confirmation of specific genetic aberration (loss of INI1 tumor suppressor gene on chromosome 22 or BRG1 gene); otherwise, a descriptive diagnosis of CNS embryonal tumor with rhabdoid features is used .

Atypical teratoid/rhabdoid tumors are usually large and very heterogeneous masses. They may be difficult to distinguish from a PNET by imaging.

Leptomeningeal seeding has been described in up to 15-30% of cases and so post-contrast imaging of the entire neuroaxis should be considered in suspected AT/RTs.

Surgery with debulking can be offered in some cases. Tumors can demonstrate leptomeningeal dissemination. Clinically AT/RTs have a much poorer prognosis than medulloblastomas, with little if any response to chemotherapy and death usually occurring within a year of diagnosis.

Primary CNS rhabdoid tumor was first identified as a unique entity in the mid/late 1980's. Prior to this, these tumors were likely misdiagnosed as primitive neuroectodermal tumor/medulloblastoma, as they are relatively similar in microscopic appearance . Early reports variably used the term malignant rhabdoid tumor.