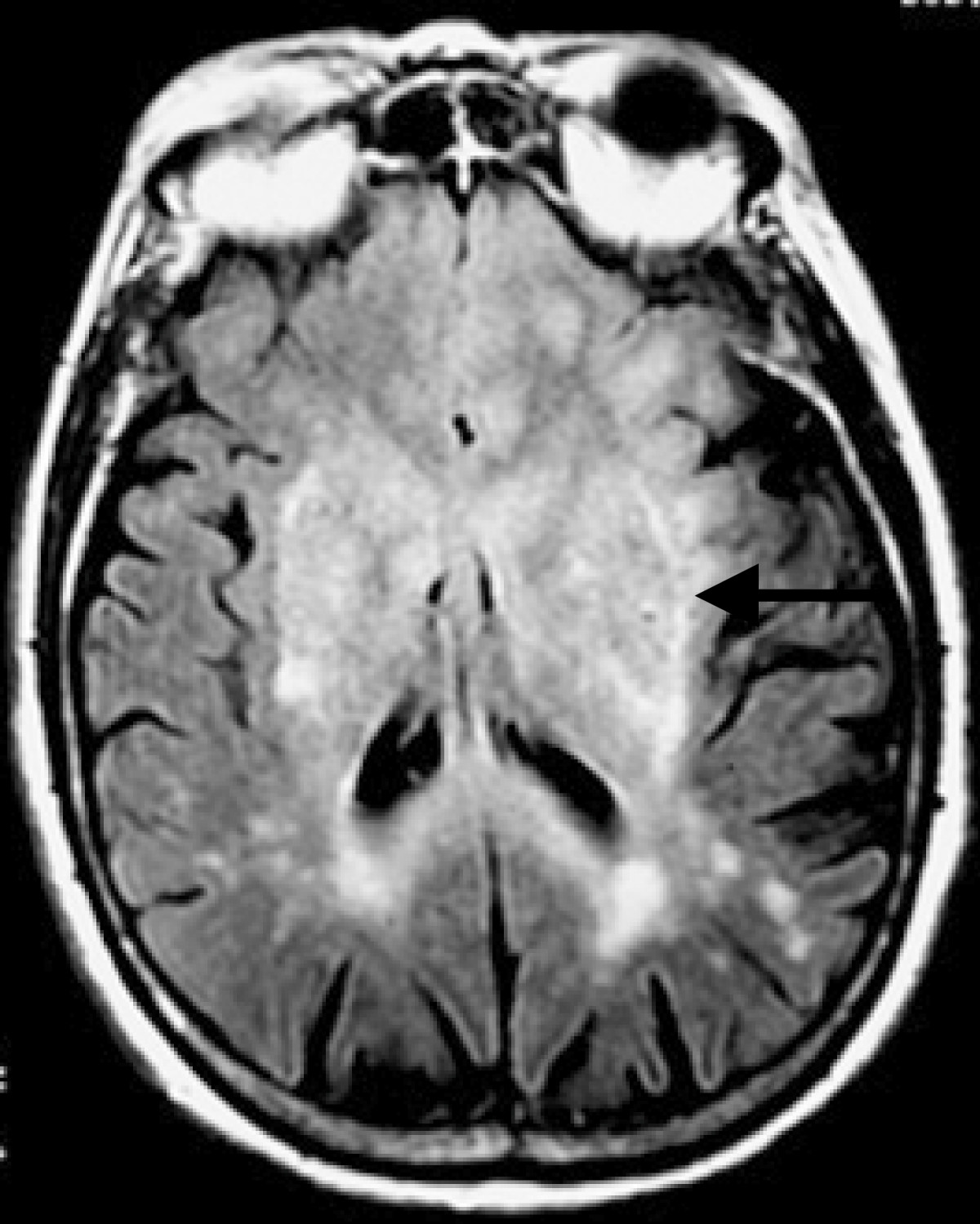 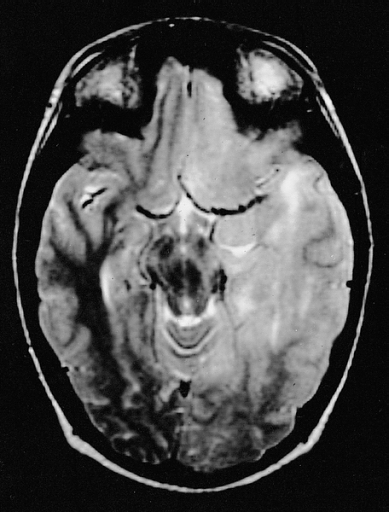 AFIP-00405606
Gliomatosis Carebri (Radiology) CNS: GLIOMATOSIS CEREBRI As is evident in this T2-weighted image, gliomatosis cerebri diffusely involves large regions of the brain, as seen on the right side of the illustration.
Wikipedia • Public domain 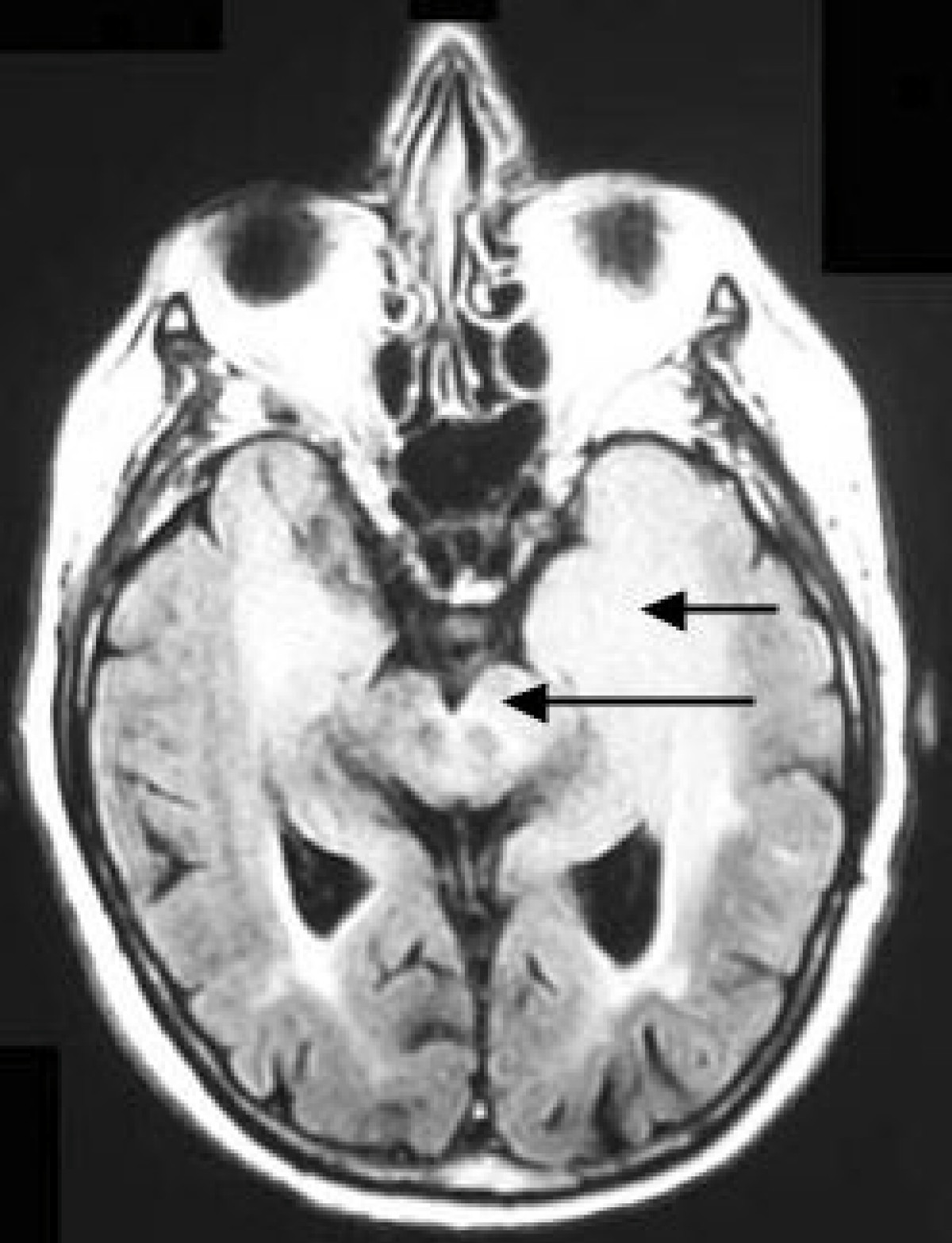 Gliomatosis cerebri is a rare growth pattern of diffuse gliomas that involves at least three lobes by definition, have frequent bilateral growth and may extend to infratentorial structures . There often is an important discordance between clinical and radiological findings, as it may be clinically silent while it appears as a very extensive process radiologically.

Importantly, whereas gliomatosis was previously considered a distinct entity since the 2016 update to the WHO classification of CNS tumors it is now merely thought of as a growth pattern .

The tumor may be primary (de novo) or secondary, with the latter as a result from the spreading of a more focal glioma . Gliomatosis cerebri growth pattern is seen in all diffuse gliomas and can contain areas of WHO grade II or III tumors and rarely grade IV . It is most commonly encountered in anaplastic astrocytomas .

Gliomatosis cerebri can be divided into two types :

CT can be normal as lesions are often isodense to normal brain parenchyma. There is a relative lack of mass effect and distortion compared to the extensiveness of involvement. There may be an ill-defined asymmetry or subtle hypoattenuation of the involved brain parenchyma.

Mass effect and enhancement are often minimal despite large portions of the brain being involved. There is a loss of grey-white matter differentiation and diffuse gyral thickening.

Diffuse T1 and T2 prolongation throughout both white and grey matter:

The condition carries a poor prognosis with an average survival of ~50% at 1 year and 25% at 3 years. Transformation into glioblastoma may occur a few years later.

Surgery is not a viable option due to the diffuse nature of this tumor but can be used to treat complications such as hydrocephalus or mass effect.

Radiation therapy has been shown to increase survival , however, the large field usually required in these lesions increases the risk of severe toxicity . Chemotherapy is a treatment option, although there is a lack of evidence in its use (both positive and negative) .