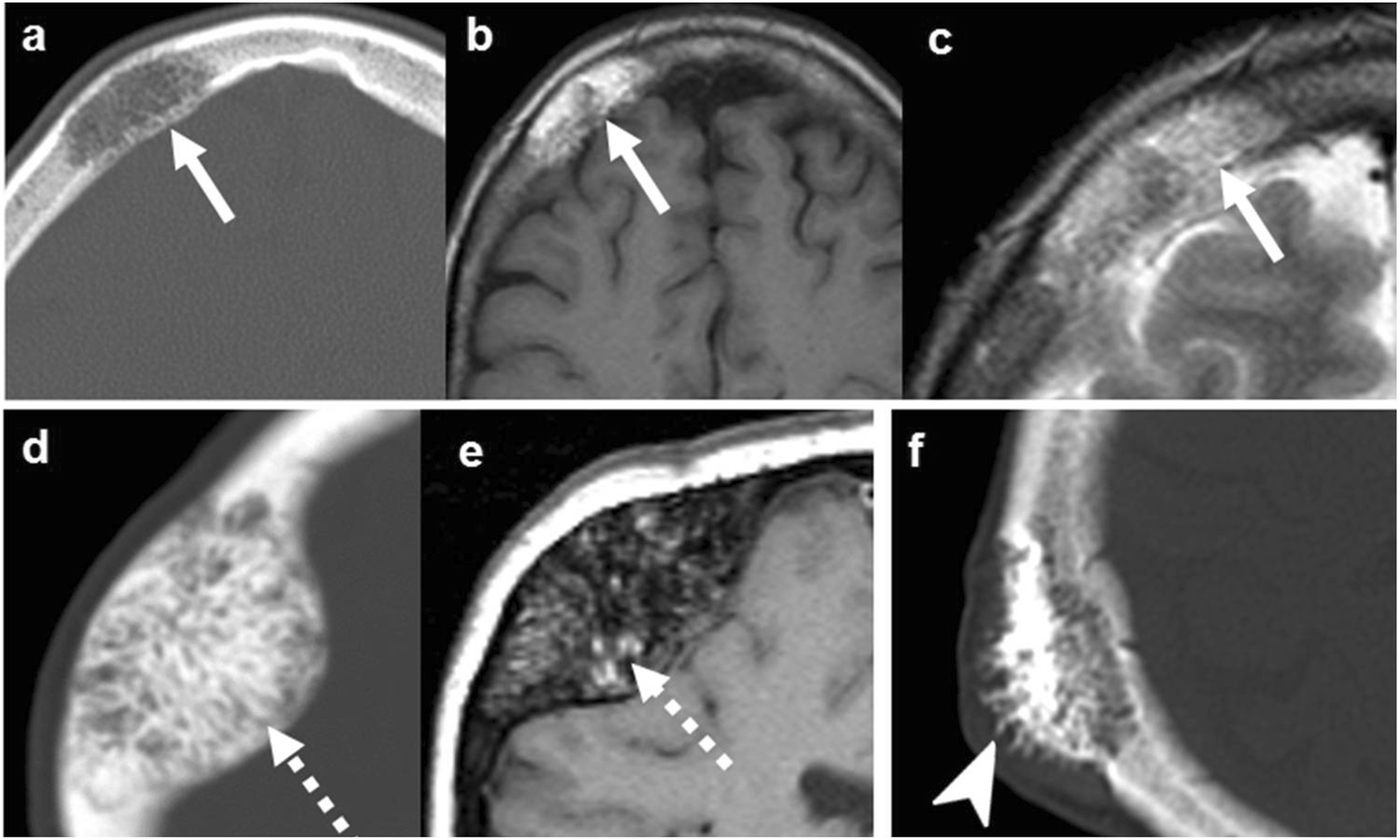 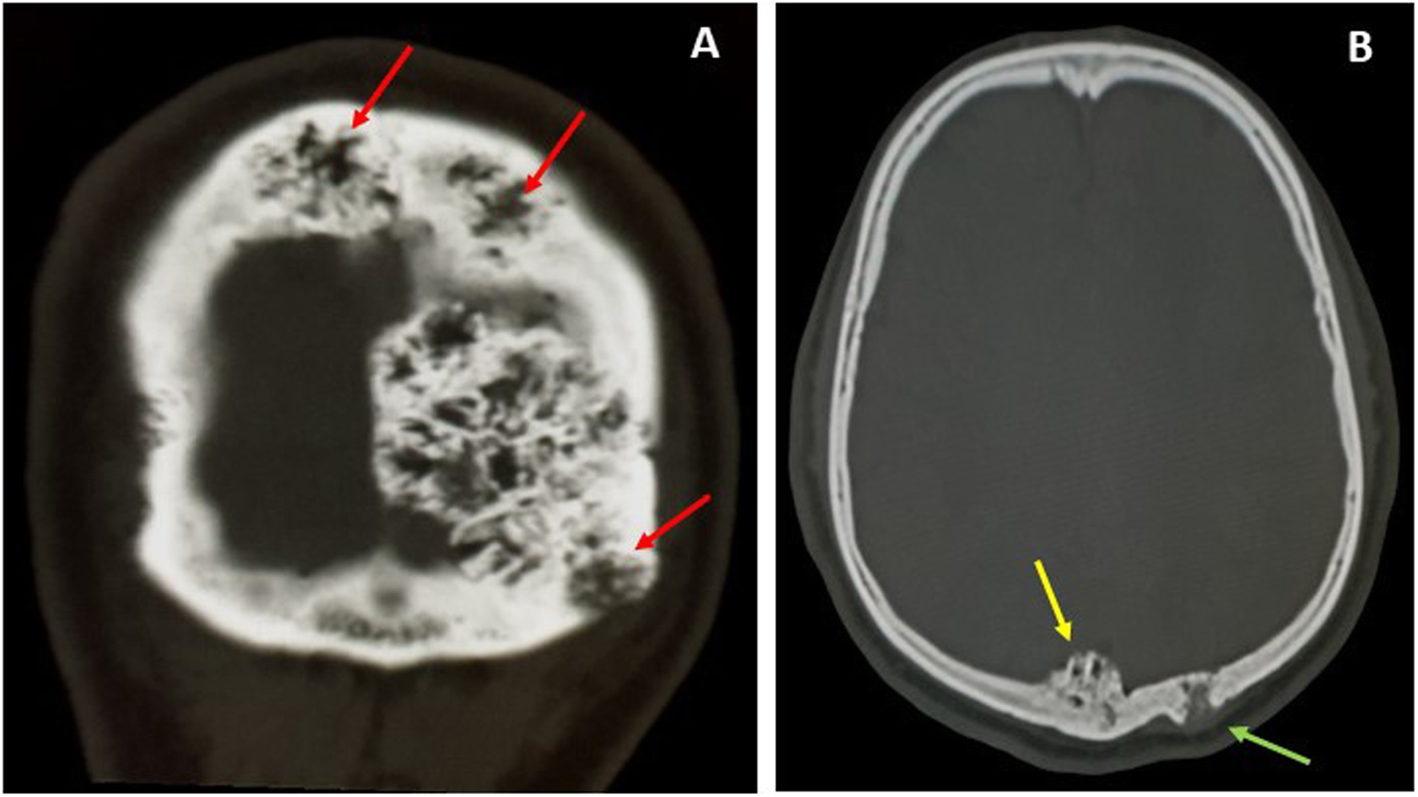 Cavernous
hemangioma of the frontal bone: a case report. A magnetic resonance imaging scan shows a hypointense lesion (yellow arrow) on the T1-weighted image (A) and a hyperintense lesion (pink arrow) on the T2-weighted image (B); a computed tomography scan reveals an osteolytic lesion (green arrow) with erosion of the tabula externa (C); a three-dimensional reconstruction of the skull with evidence of the lesion in the pre-operative time (red arrow) (D).
jmedicalcasereports.biomedcentral.com • CC-by-2.0 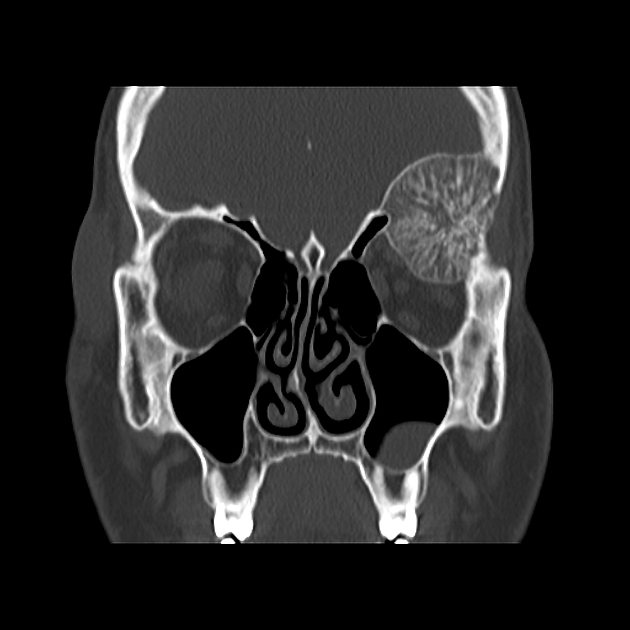 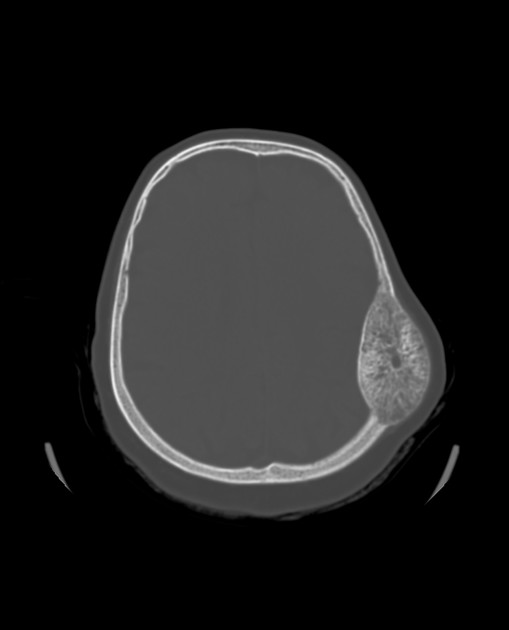 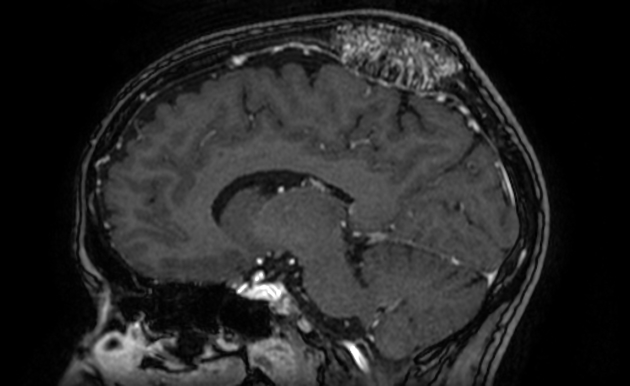 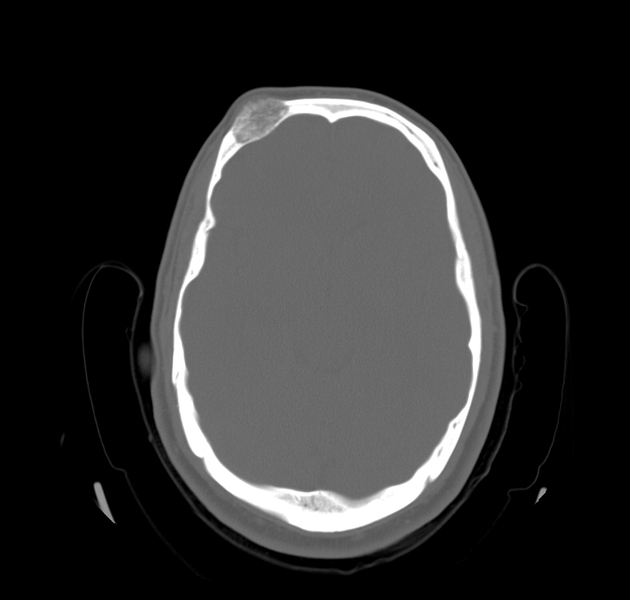 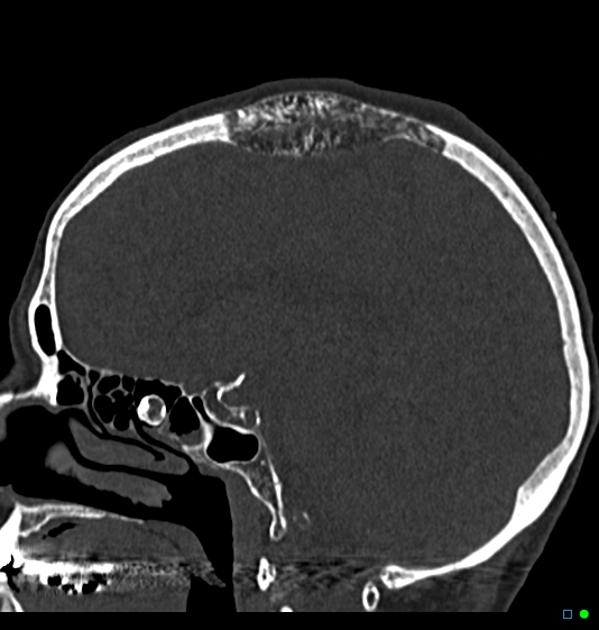 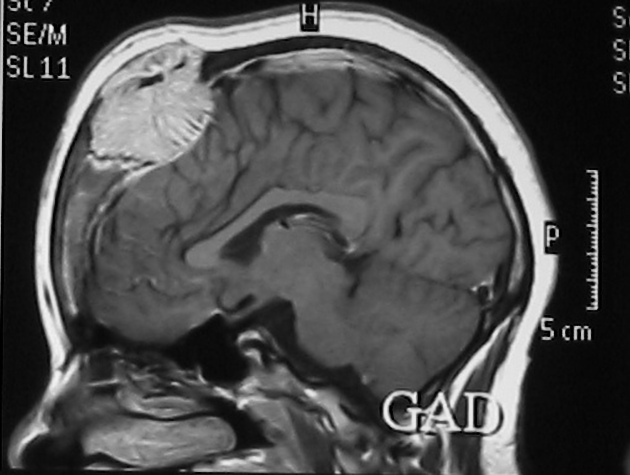 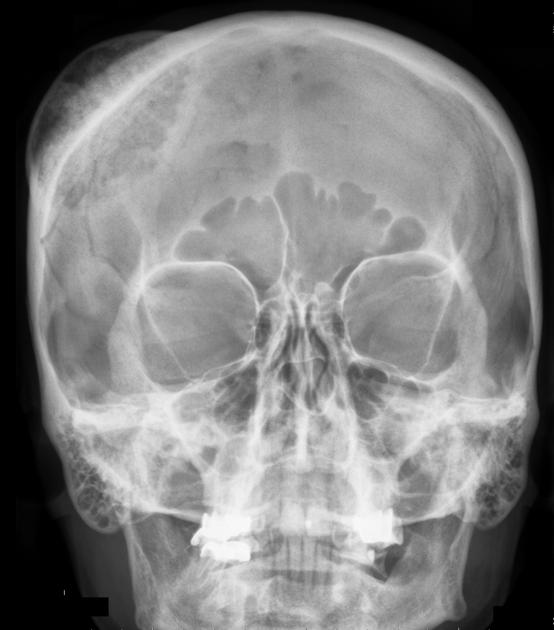 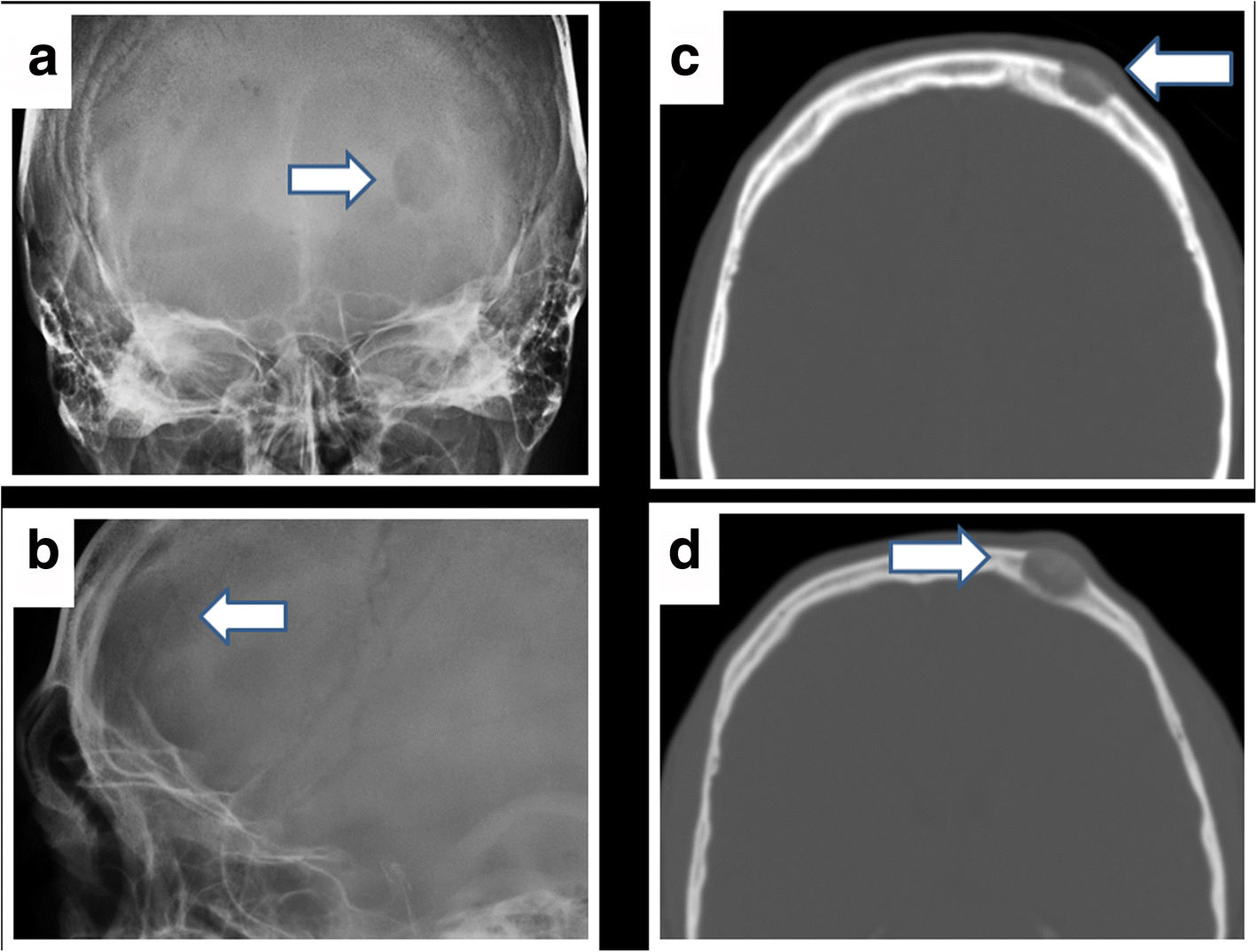 Intraosseous
cavernous hemangioma: presentation of a clinical case. Radiological images of a left frontal intraosseous lesion. a Simple X-ray of the skull, in the antero-posterior view and b in the lateral view of a radiolucent lesion (white arrows), rounded, with well-defined edges, located in the left frontal bone. c First CT cerebral with bone window performed on the patient 3 years ago. In localization of the left frontal region, a lytic bone lesion is observed that discreetly expands the diploe both in its internal and external table, with well-defined contours in its medullar region, being worse defined there could even be minimal solutions of continuity in the internal table. A poorly defined trabecular bone pattern was observed inside the lesion. The findings are compatible with a moderate aggressiveness. d In the last CT cerebral, it was appreciated how the lesion had increased in size. Produces a slight insufflation of the frontal calotte with loss of the cortex of the external table. Its behavior is of low radiological aggressiveness
EJNS.springeropen.com • CC-by-4.0 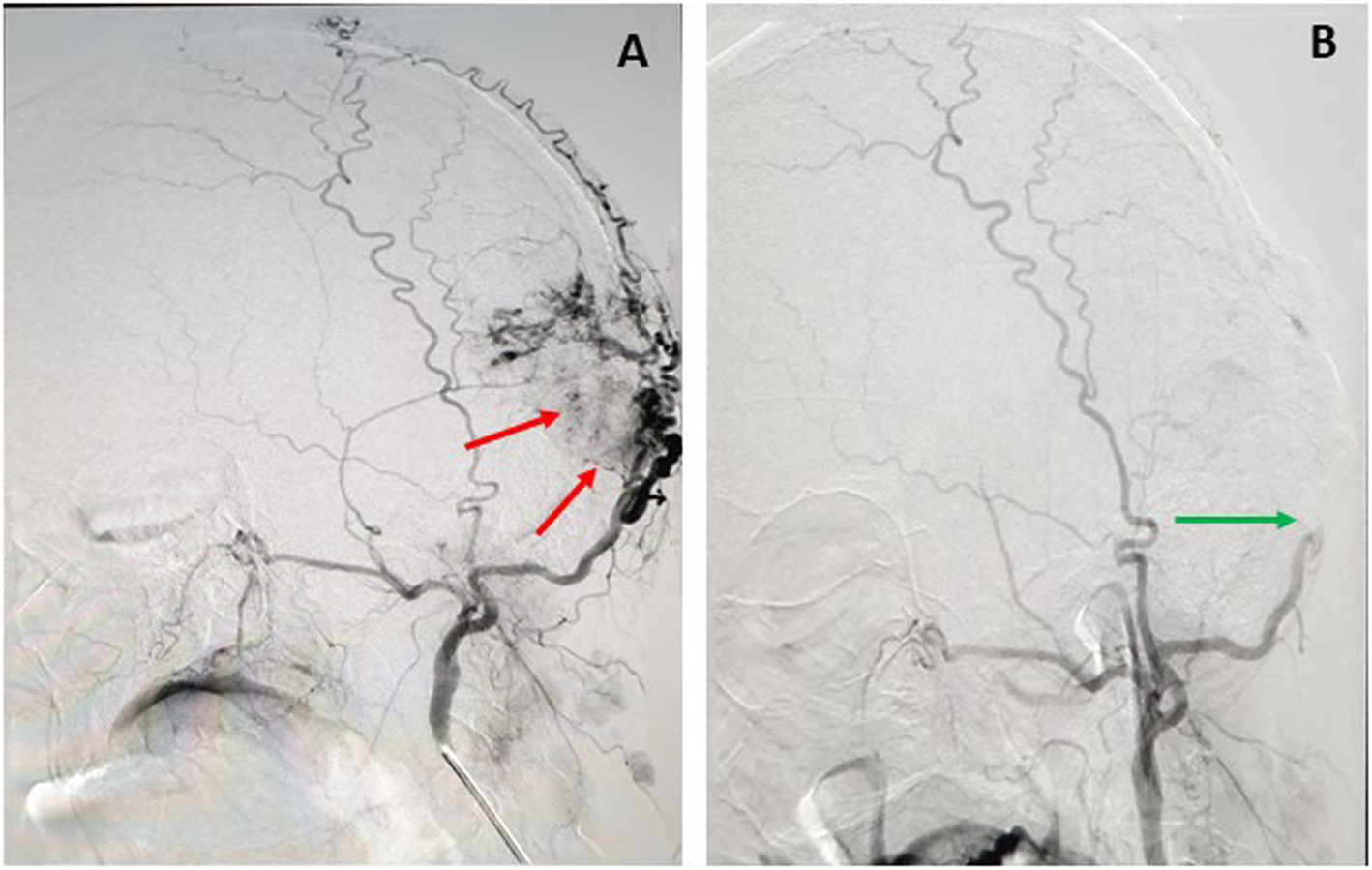 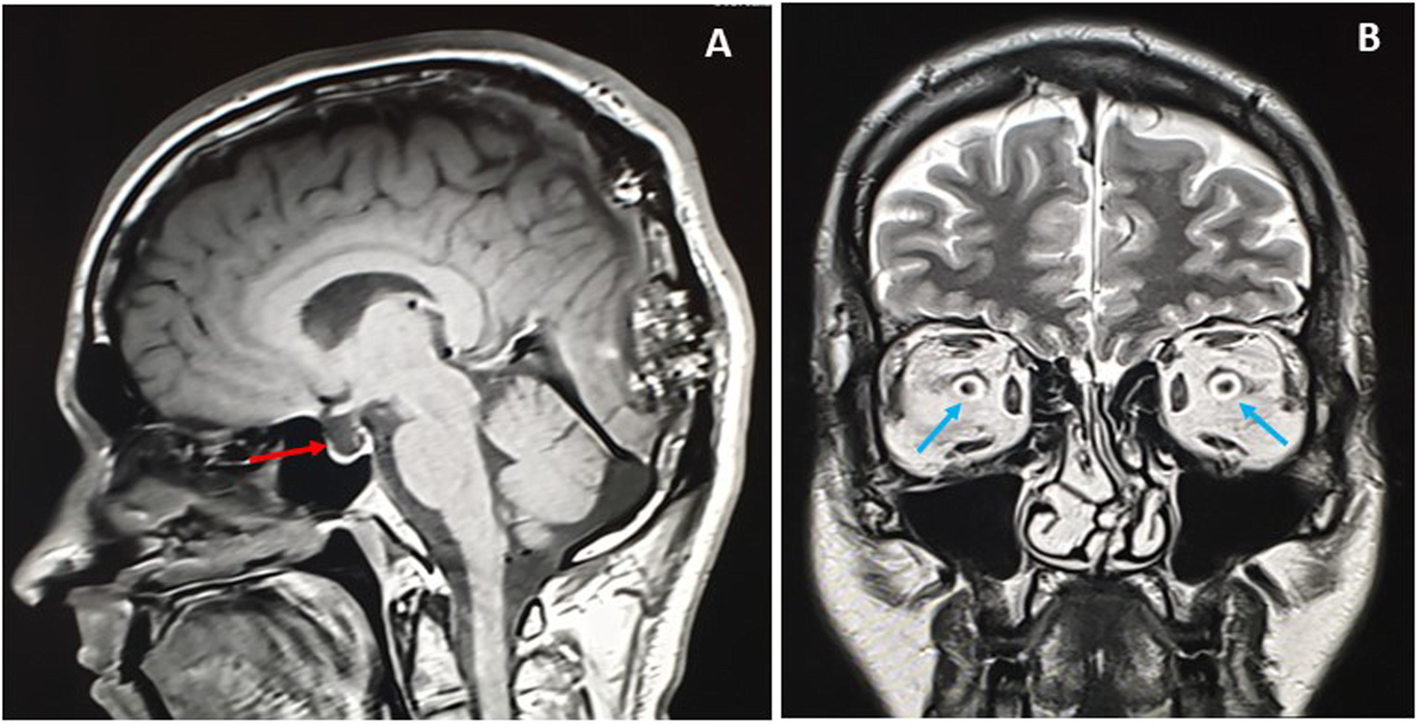 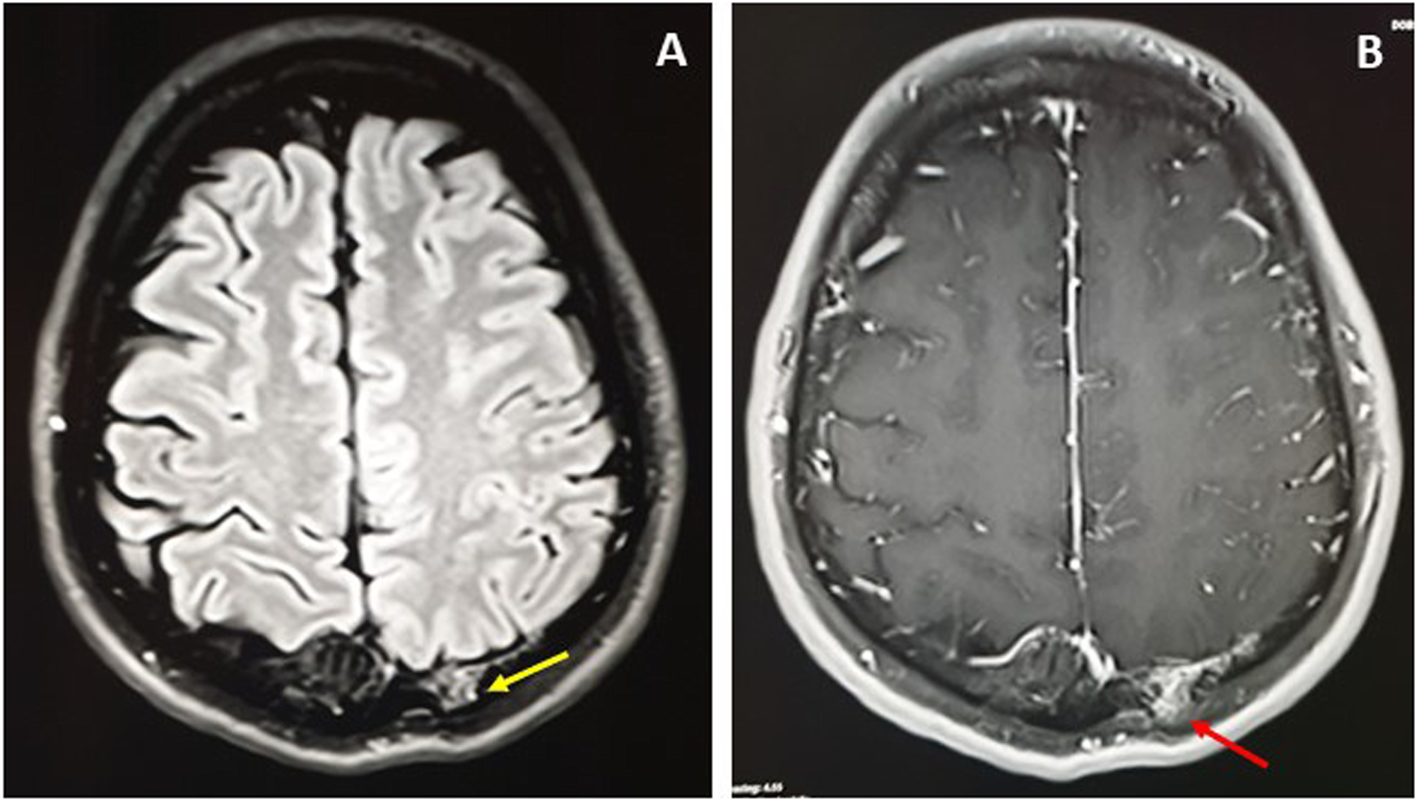 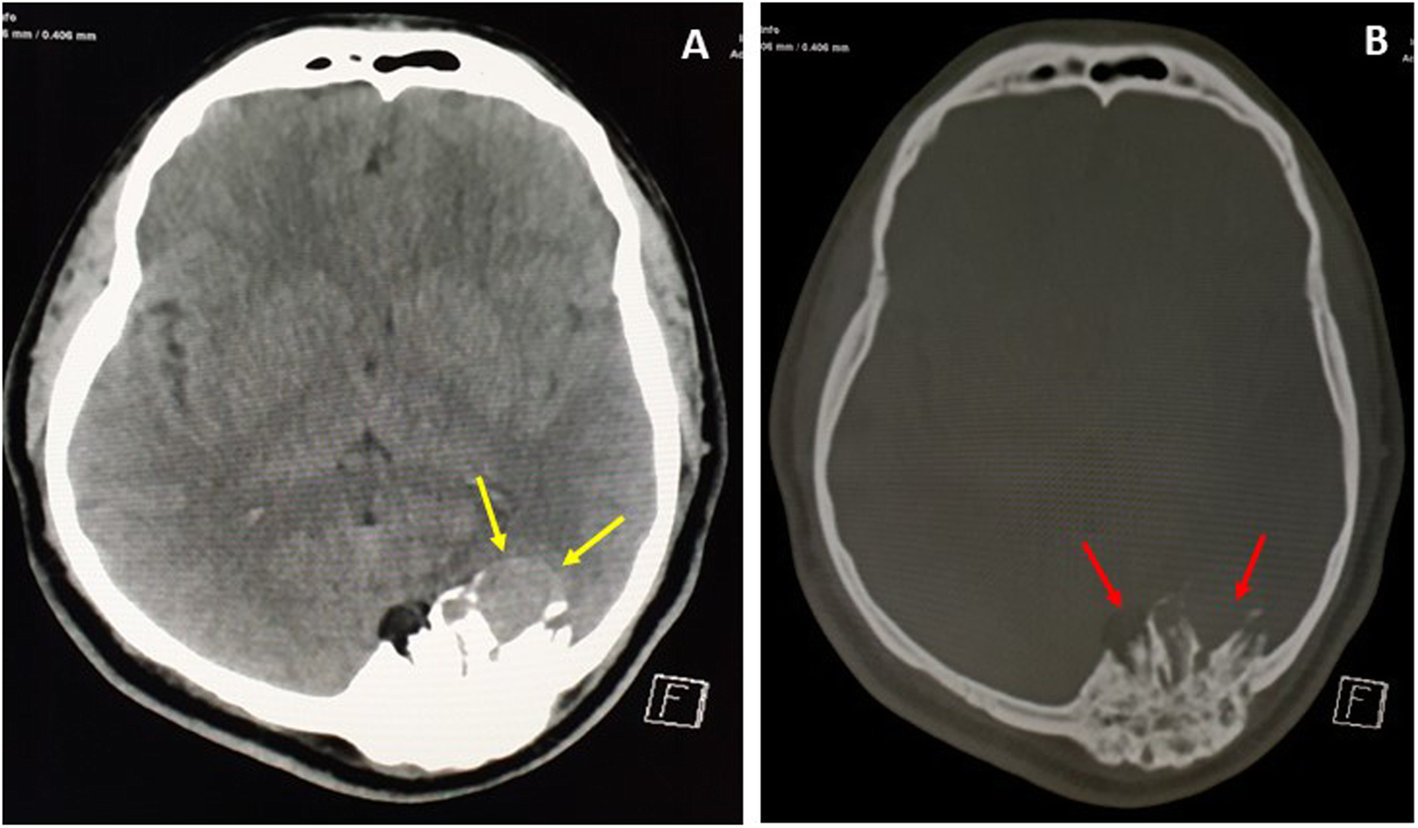 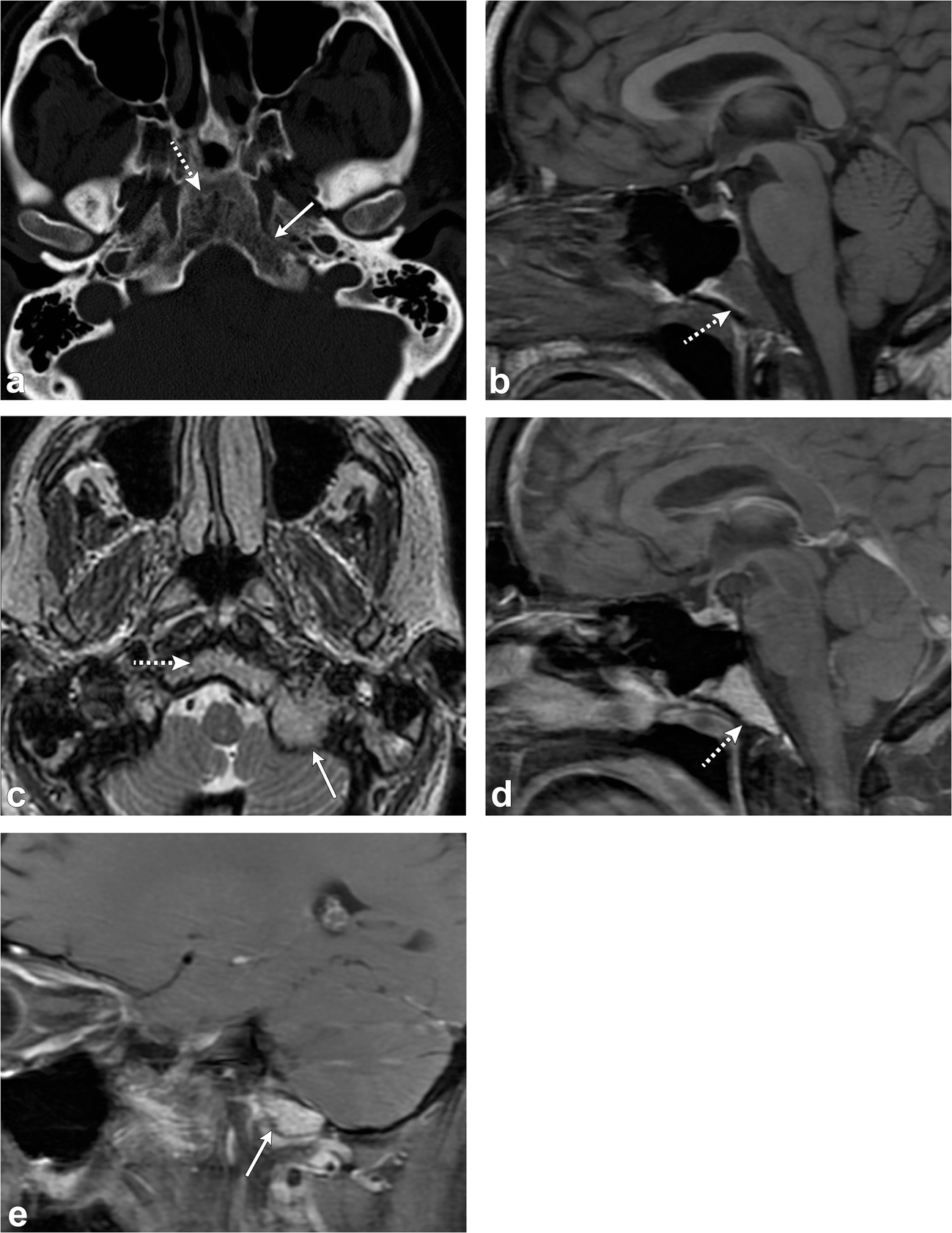 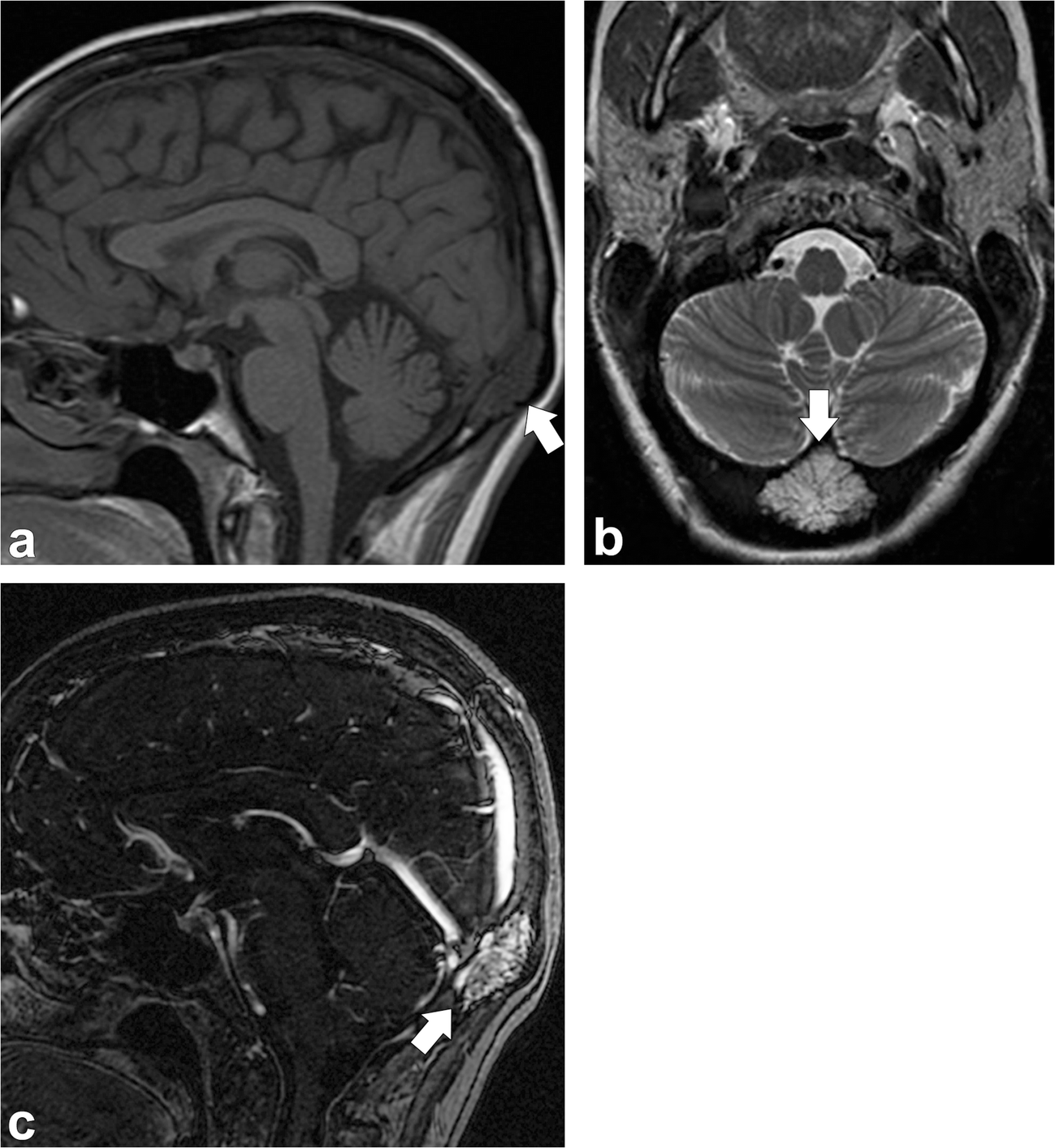 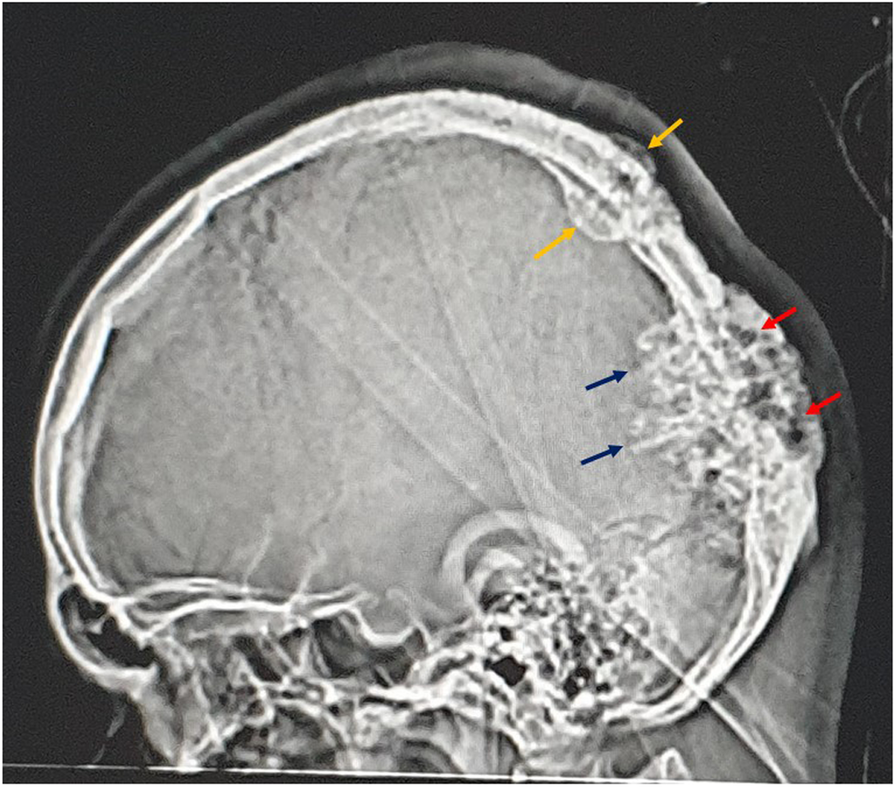 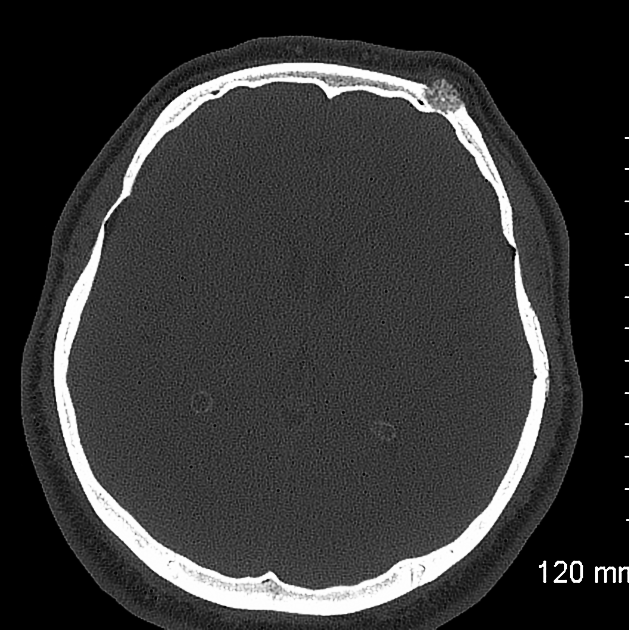 Skull vault hemangiomas (SVH), or hemangiomas of the calvaria, are benign slow-growing vascular lesions affecting the skull diploe in any location. They have been more recently renamed osseous venous (low-flow) vascular malformations given their nonneoplastic nature, but "hemangioma" remains commonly used.

Please refer to the article on intraosseous hemangiomas for a general discussion of that entity.

The calvaria is the second most prevalent site for intraosseous hemangiomas, particularly the frontal and parietal bones . It represents 10% of benign neoplasms of the skull and 0.2% of all osseous tumors . Commonly occurs in women in the 4-5decades of life with a 3:1 female-male ratio .

These tumors are slow-growing and are generally asymptomatic, unless when palpable due to a lump produced by an expansion of the outer table .

As an intraosseous hemangioma, skull vault hemangiomas are classified as venous, cavernous, or capillary type, according to their predominant vascular network. Histologically, it demonstrates hamartomatous vascular tissue within endothelium, but may also contain fat, smooth muscle, fibrous tissue, and thrombus .

Lytic lesion with a sclerotic rim (usually with a honeycomb- or sunburst-like appearance).

Usually presents as an expansile bone lesion with thin borders and a characteristic sunburst pattern of trabecular thickening radiating from a common center . Erosions of both internal or external plates can occur and may be associated with internal or external tumor expansion. Sometimes, bony trabeculae can grow beyond the cortical bone, and simulate an aggressive pseudo-"hair-on-end" periosteal reaction .

DSA is important for the surgical planning of smaller lesions and embolization of larger ones.

Signal intensity is somewhat variable, depending largely on the amount of fat content .