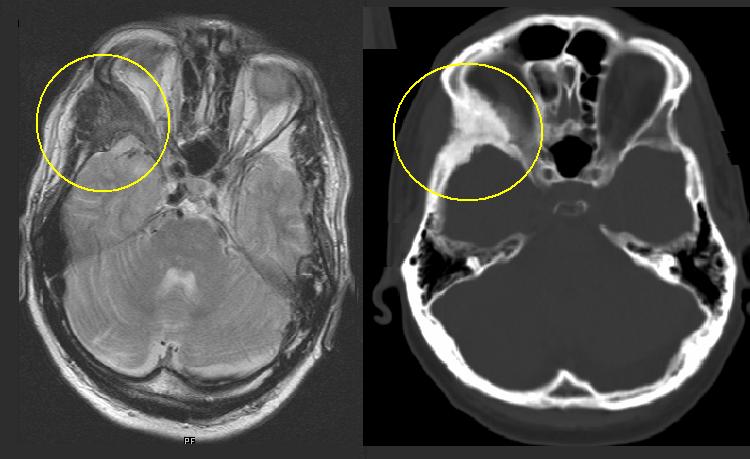 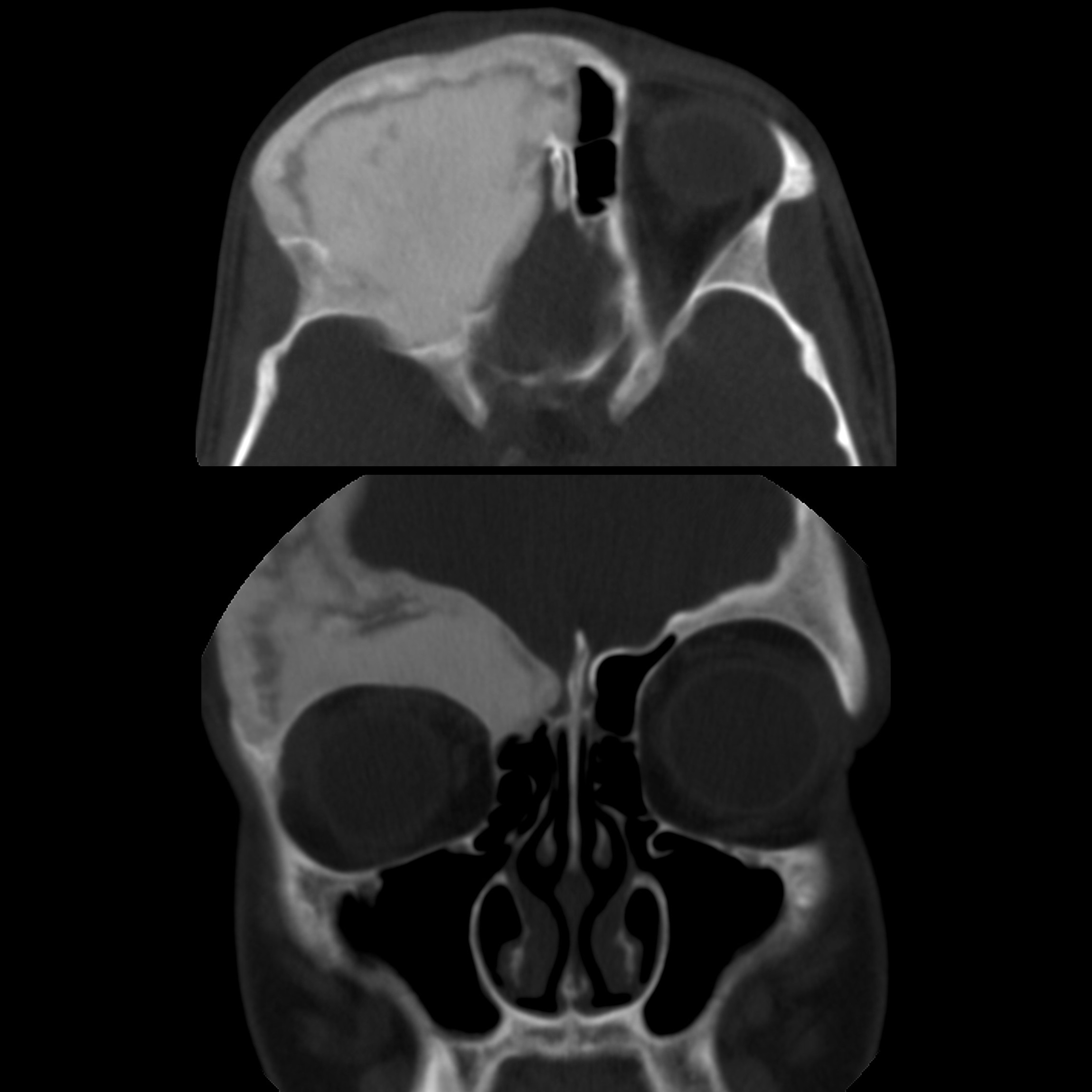 Teenager
whose right eye was becoming progressively displaced. Axial (above) and coronal (below) CT without contrast of the face show a lesion involving the right frontal bone and orbital roof and superior medial and lateral walls of the right orbit that has osseous matrix and ground glass appearance with a wide zone of transition and no periosteal new bone.The diagnosis was fibrous dysplasia.
pediatricimaging.org • CC-by-nc-sa 4.0 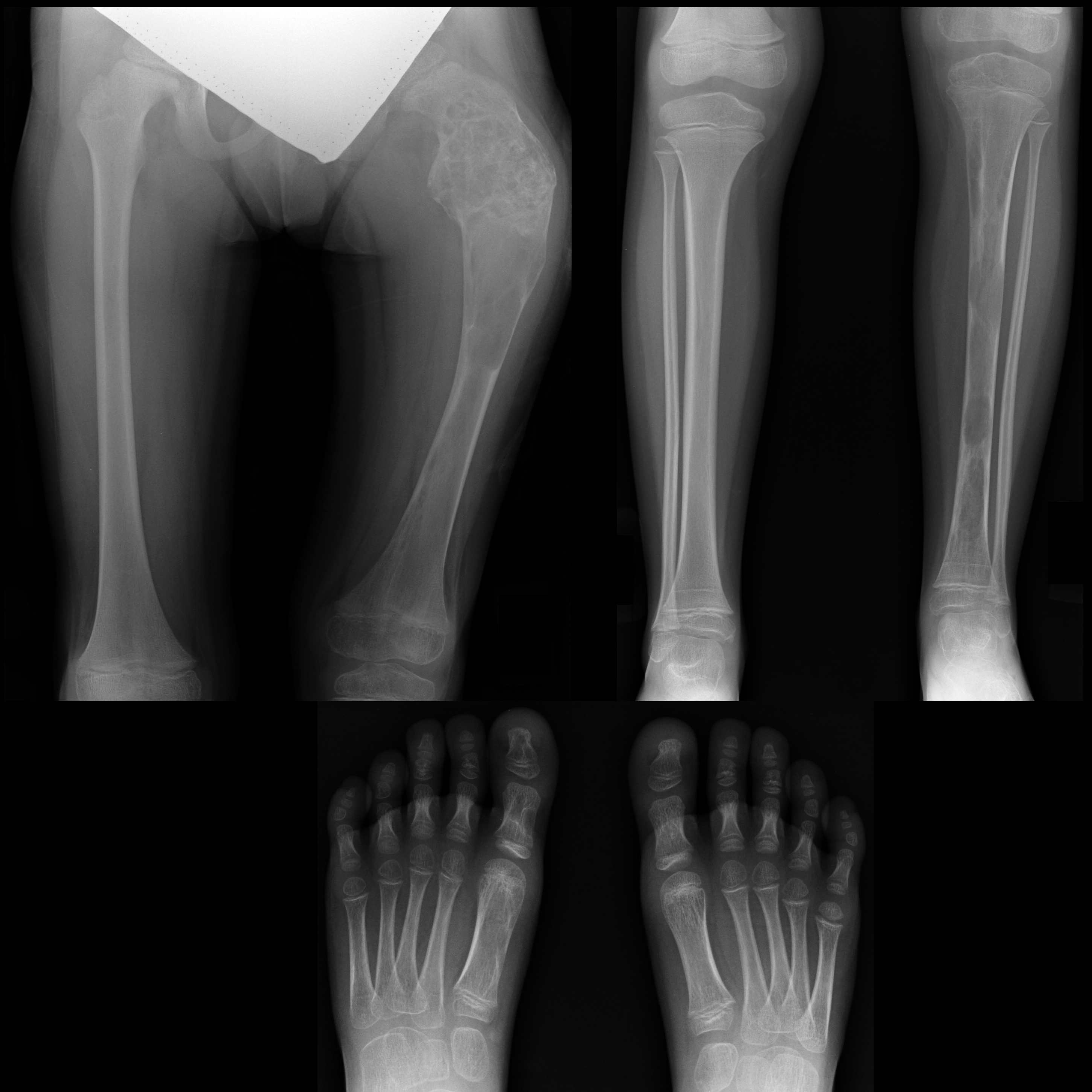 Fibrous dysplasia (FD) is a non-neoplastic tumor-like congenital process, manifested as a localized defect in osteoblastic differentiation and maturation, with the replacement of normal bone with large fibrous stroma and islands of immature woven bone. Fibrous dysplasia has a varied radiographic appearance. If asymptomatic, it does not require treatment.

Fibrous dysplasia can affect any bone and can be divided into four subtypes  (although there is some overlap):

Fibrous dysplasia is found predominantly in children and young adults, with ~75% of patients presenting before the age of 30 years (highest incidence between 3 and 15 years). In polyostotic form, patients usually present by 10 years old. There is no recognized gender predilection .

Although fibrous dysplasia is usually sporadic, a number of associations are well recognized:

The condition is often an incidental finding and is usually painless. Alternatively, it may present due to bony expansion or remodeling. Morbidity may arise from compression and displacement of adjacent structures. This is particularly true in craniofacial fibrous dysplasia, where the content of the orbit or cranial nerves may be compressed.

Fibrous dysplasia is due to developmental dysplasia and focal arrest in normal osteoblastic activity secondary to a non-hereditary mutation which results in the presence of all of the components of normal bone with a lack of normal differentiation into their mature structures.

Monostotic form (involving only one bone)

This is by far the most common and accounts for 70-80% of cases . It is usually asymptomatic until 2-3 decade but can be seen throughout adulthood . After puberty, the disease becomes inactive, and monostotic form does not progress to polyostotic form.

In the remaining 20-30% of cases, multiple bones are involved. As expected this presents earlier, typically in childhood (mean age of 8 years) with two-thirds symptomatic by the age of 10.

The appearance of fibrous dysplasia is usually smooth and homogenous with endosteal scalloping and cortical thinning . The borders are well defined and the cortex is usually intact but thinned due to the expansive nature of the lesion . Other features include:

MRI is not particularly useful in differentiating fibrous dysplasia from other entities as there is marked variability in the appearance of the bone lesions, and they can often resemble a tumor or more aggressive lesions.

Usually, no treatment is required as the bone lesions usually do not progress beyond puberty. If a mass effect is severe, then surgical decompression may be considered. The monostotic form does not transform or progress into the polyostotic form .

Not surprisingly, bone affected by fibrous dysplasia is weaker than normal and thus susceptible to pathological fractures.

Sarcomatous dedifferentiation (osteosarcoma [most common ], fibrosarcoma, malignant fibrous histiocytoma, or rarely chondrosarcoma) is occasionally seen (< 1%) and is more common in the polyostotic form. It should be noted that many reported cases may relate to previous treatment with radiation therapy .

Due to the variability of the appearance of fibrous dysplasia the potential differential is very long but will be significantly influenced by the dominant pattern.