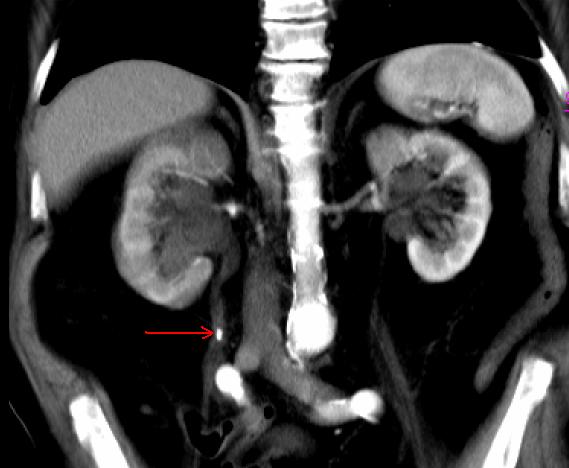 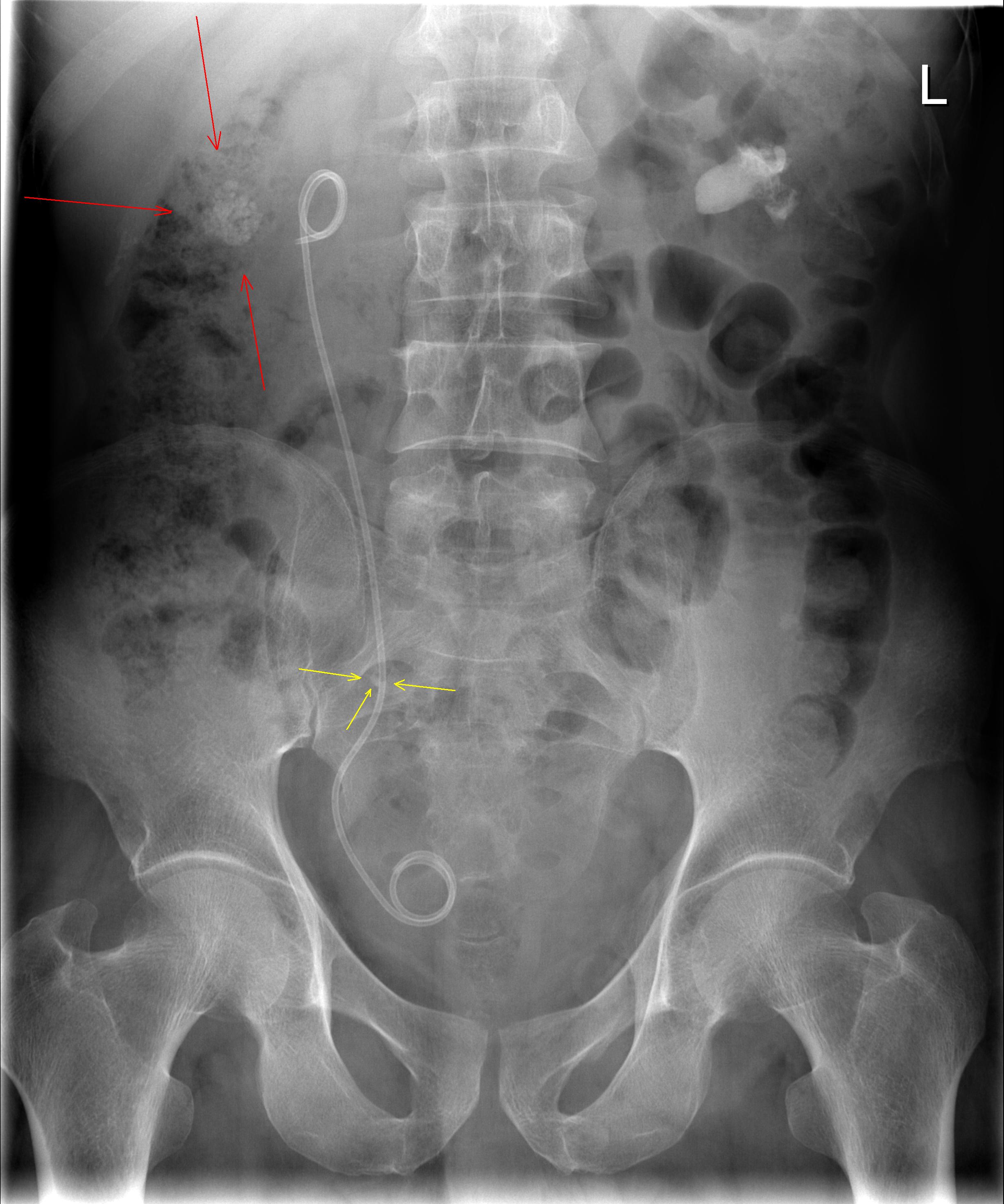 X-ray of the
abdomen, with nefrolithiasis and a double-J catheter.
Wikipedia • CC BY-SA 3.0

KUB
Radiograph, Roentgenogram or Medical X-ray image. Showing a large staghorn calculus involving the major calyces on left and separate renal caliceal stones on right. May not be to scale.
Wikipedia • CC BY-SA 3.0

Urolithiasis refers to the presence of calculi anywhere along the course of the urinary tracts. For the purpose of the article, the terms urolithiasis, nephrolithiasis, and renal/kidney stones are used interchangeably, although some authors have slightly varying definitions of each.

See main articles: ureteric calculi and bladder stones for further discussion of these.

Most patients tend to present between 30-60 years of age .

The lifetime incidence of renal stones is high, seen in as many as 5% of women and 12% of males. By far the most common stone is calcium oxalate, however, the exact distribution of stones depends on the population and associated metabolic abnormalities (e.g. struvite stones are more frequently encountered in women, like urinary tract infection as more common) .

Although some renal stones remain asymptomatic, most will result in pain. Small stones that arise in the kidney are more likely to pass into the ureter where they may result in renal colic. Hematuria, although common, may be absent in approximately 15% of patients . Strangury is also occasionally present. Some patients may also present with the complication of obstructive pyelonephritis, and may, therefore, have a septic clinical presentation.

The composition of urinary tract stones varies widely depending upon metabolic alterations, geography, and presence of infection, and their size varies from gravel to staghorn calculi. The more common composition of stones include (more detail below):

Certain risk factors have been identified including :

Most renal calculi contain calcium, usually in the form of calcium oxalate (CaC2O4) and often mixed with calcium phosphate (CaPO4) . In most instances, no specific cause can be identified, although most patients have idiopathic hypercalciuria without hypercalcemia.

Brushite is a unique form of calcium phosphate stones that tends to recur quickly if patients are not treated aggressively with stone prevention measures and are resistant to treatment with shock wave lithotripsy.

Interestingly hyperuricosuria is also associated with increased calcium-containing stone formation and is thought to be related to the uric acid crystals acting as a nidus on which calcium oxalate and calcium phosphate can precipitate .

Rarely the underlying cause is primary oxaluria, a liver enzyme deficiency leading to massive cortical and medullary nephrocalcinosis, and renal failure.

Certain medications can predispose to calcium oxalate or calcium phosphate calculi, including:

Struvite (magnesium ammonium phosphate or "triple phosphate") stones are usually seen in the setting of infection with urease-producing bacteria (e.g. Proteus, Klebsiella, Pseudomonas, and Enterobacter), resulting in hydrolysis of urea into ammonium and increase in the urinary pH . They can grow very large and form a cast of the renal pelvis and calyces resulting in so-called staghorn calculi. The struvite accounts for ~70% of these calculi and is usually mixed with calcium phosphate thus rendering them radiopaque. Uric acid and cystine are also found as minor components.

Hyperuricosuria is not always associated with hyperuricemia and is seen in a variety of settings (see above), although in most instances uric acid stones occur in patients with no identifiable underlying etiology . Uric acid crystals form and remain insoluble at acidic urinary pH (below 5).

Cystine stones are also formed in acidic urine and are seen in patients with congenital cystinuria.

These depend on the stone composition and vary according to modality. The much greater sensitivity of CT to tissue attenuation means that some stones radiolucent on plain radiography are nonetheless radiopaque on CT.

Intravenous urography (IVU) is a traditional radiographic study of the renal parenchyma, pelvicalyceal system, ureters, and the urinary bladder. It involves the administration of intravenous contrast. This exam has been largely replaced by non-contrast CT.

Ultrasound is frequently the first investigation of the urinary tract, and although by no means as sensitive as CT, it is often able to identify calculi. Small stones and those close to the corticomedullary junction can be difficult to reliably identify. Ultrasound compared to CT KUB reference showed a sensitivity of only 24% in identifying calculi. Nearly 75% of calculi not visualized were <3 mm . Features include :

​Pulsed wave (PWD) and color flow Doppler (CFD) are further sonographic modalities that may act as a diagnostic aid, and assess for the presence of complications;

On CT almost all stones are opaque but vary considerably in density.

Two radiolucent stones are worth mentioning :

99% of renal tract calculi are visible on a non-contrast CT. Given that one of the commonest sites for a stone to become lodged is the vesicoureteric junction, some centers perform the study in the prone position to establish if the stone is retained within the intravesical component of the ureter or has already passed into the bladder itself.

Dual-energy CT has also been shown to predict the success of extracorporeal shock wave lithotripsy .

Indications for surgical management include:

Percutaneous nephrolithotomy (PCNL) is usually reserved for large calculi near the pelviureteric junction, especially staghorn calculi, which are unlikely to be removable via retrograde access.

Small asymptomatic stones in the kidney can be safely ignored, and if patients maintain good states of hydration, the risk of recurrent symptoms can be dramatically reduced . In all settings, a search for a possible underlying cause of hyperoxaluria/hypercalciuria should be sought and if present corrected when possible.

Larger stones may be treated with:

Struvite stones are usually large (staghorn calculi) and result from infection. These stones need to be treated surgically and the entire stone removed, including small fragments, as otherwise, these residual fragments act as a reservoir for infection and recurrent stone formation.

Uric acid stones usually are the result of low urinary pH, and hydration and elevation of urinary pH to approximately 6 are usually sufficient (note rendering the urine too alkali (e.g. pH >6.5) may result in calcium stone formation) .

Cystine stones may be difficult to treat and are difficult to shatter with ESWL. Hydration and alkalinisation are usually first-line therapy.

The differential of renal calculi is essentially that of abdominal calcifications. On CT there is usually little confusion as not only is CT exquisitely sensitive in detecting stones, but their location can also be precisely noted. If non-contrast CT is equivocal for the location of the calcification, then a repeat CT with urographic phase contrast is usually able to clarify

Thus the differential diagnosis is predominantly on plain radiograph, and to a lesser degree ultrasound: