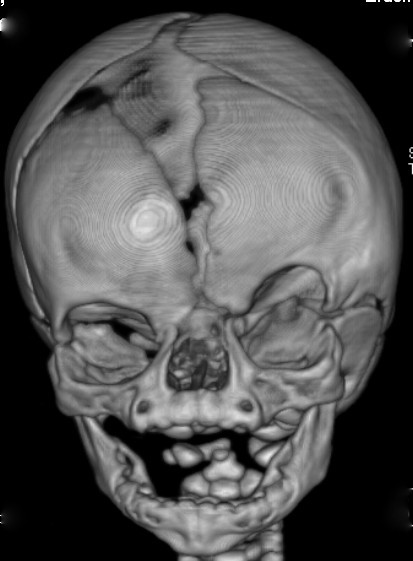 CT-scan of a
skull of a patient with coronal synostosis as part of craniofrontonasal dysplasia.
Wikipedia • CC BY-SA 3.0
Hallo!
Radiopaedia • CC-by-nc-sa 3.0 • de

Over development of the lesser wings of the sphenoid bone may be an underlying factor.

While it can as an isolated anomaly, there are numerous syndromic as well as non syndromic associations with orbital hypertelorism which include:

There are many more associations other than those mentioned on this list. Please add and/or reference as appropriate.

It is can be assessed by measuring the distance between the lateral orbital walls or the medial orbital walls. The interocular distance/diameter (IOD) and the biocular diameter (BOD) are both typically increased with hypertelorism.

Due to its associations with other conditions, detailed sonographic surveillance for other fetal anomalies is recommended if hypertelorism is seen on ultrasound.

Some indices used include: