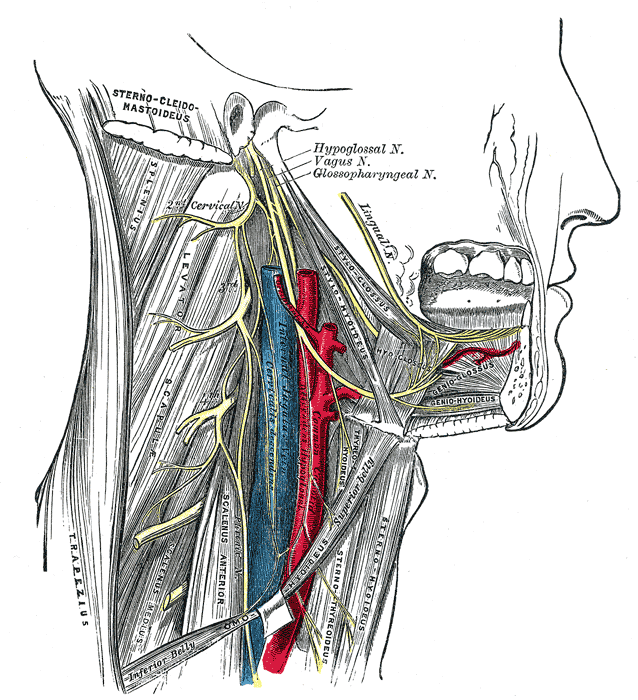 The hypoglossal nerve is the twelfth and last cranial nerve and supplies the tongue with motor control. It only has one catch: it receives hitch-hiking C1 nerve root fibers, which it distributes before reaching the tongue.

The cell bodies of the nerve are located in the hypoglossal nucleus which lies in the medulla along the floor of the fourth ventricle.

The nerve emerges as a number of rootlets between the pyramid and the olive from the lateral surface of the medulla. These join to form two roots, and passing anteriorly, they enter the hypoglossal canal, located between the occipital condyle and jugular tubercle of the occipital bone, which runs obliquely forwards (posteromedial to anterolateral), emerging below the base of the skull. Within the canal, the two roots join emerging from the canal as a single nerve.

In the upper neck, the nerve runs behind the inferior ganglion of the vagus nerve, and then between the internal jugular vein and internal carotid artery up to the occipital artery and its branch to sternocleidomastoid that hook over it (laterally). At this point, the nerve runs forwards, with the carotid artery and uppermost loop of the lingual artery located medial to it.

The lingual artery passes medially (deep) to hyoglossus whereas the hypoglossal nerve remains lateral (superficial). From here it gives off its terminal branches that supply all the muscles of the tongue except for palatoglossus.