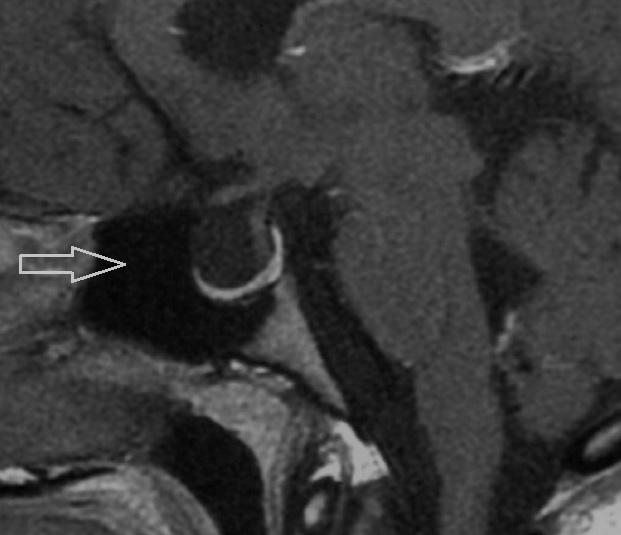 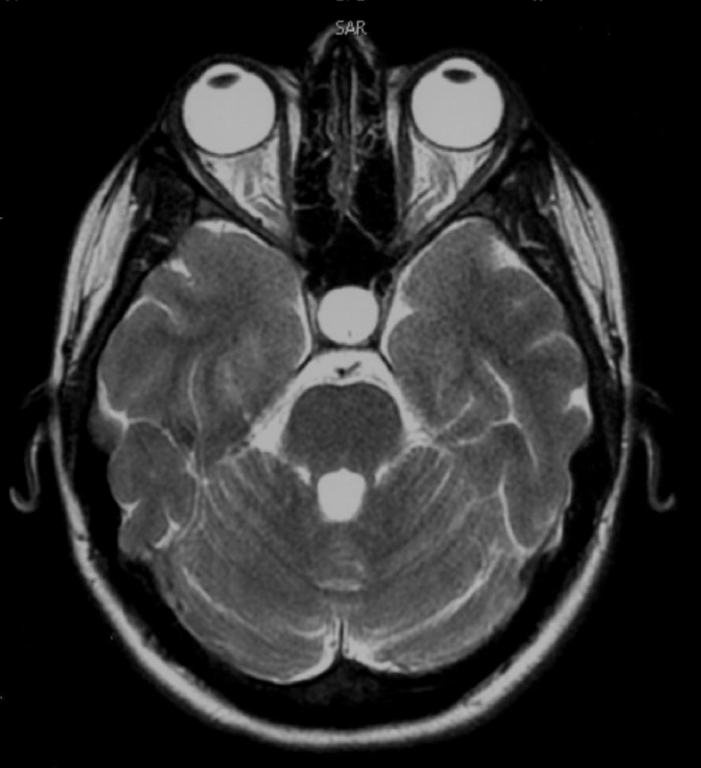 “Orbitinig
around” the diagnosis: pseudotumor cerebri. SE T2-weighted imaging, axial plane. Posterior flattening of the posterior pole of the globes, resulting in shortening of the eyes. Dilation and tortuosity of the optic nerve sheath.
www.eurorad.org • CC by-nc-sa-4.0 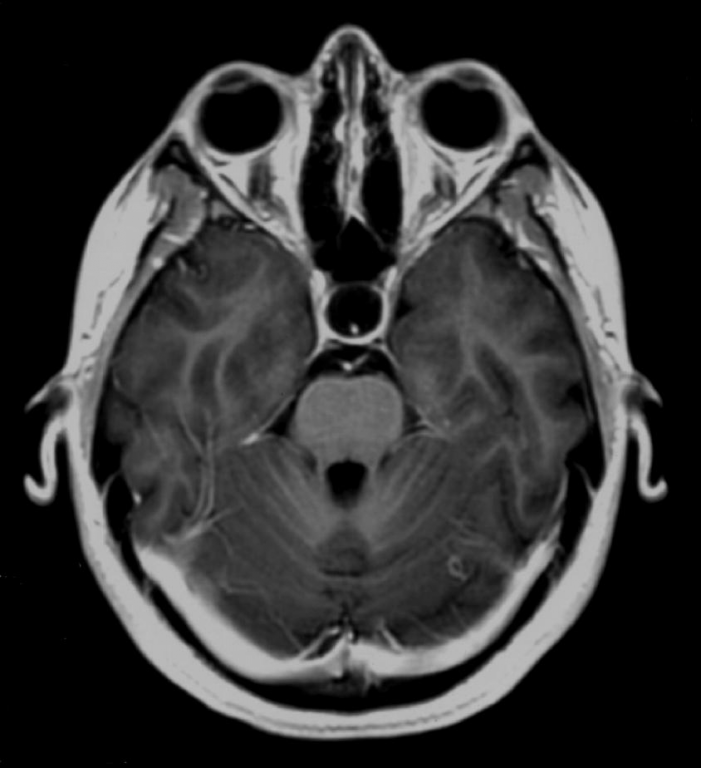 Idiopathic intracranial hypertension (IIH), also known as pseudotumor cerebri, is a syndrome with signs and symptoms of increased intracranial pressure but where a causative mass or hydrocephalus is not identified.

Interestingly as it has become evident that at least some patients present with IIH due to identifiable venous stenosis, some authors now advocate reverting to the older term pseudotumor cerebri as in these patients the condition is not idiopathic . An alternative approach is to move these patients into a group termed secondary intracranial hypertension .

A variety of conditions are known to be associated with idiopathic intracranial hypertension including:

Papilledema may not always be present or may be unilateral (including pseudo-Foster Kennedy syndrome), making the clinical diagnosis less than straightforward . Neurological examination is usually normal, with a sixth cranial nerve palsy sometimes encountered.

Additional clinical findings include normal CSF composition with elevated opening pressure. It should be noted that opening pressure varies significantly. One study continuously measuring CSF pressures demonstrated a mean pressure of less than 35 mmHg (48 cm H2O) but with intermittent pressure waves as with amplitudes of 50–80 mmHg (68–109 cm H2O) which lasted 5 to 20 minutes) .

Aberrant arachnoid granulations, also referred to as meningoceles, can result in secondary CSF leak can present as rhinorrhea, otorrhea, intracranial hypotension, and recurrent bacterial meningitis . In such patients it is often only after dural repair that intracranial hypertension becomes evident; presumably, the CSF leak from the meningocele normalized pressure .

Imaging of the brain with CT and MRI is essential in patients with suspected idiopathic intracranial hypertension, to exclude elevated CSF pressure due to other causes such as brain tumor, dural sinus thrombosis, hydrocephalus, etc.

Although bony changes are permanent, the rest are dynamic and may be reversible with treatment .

* It is important to take into account the age and gender of a specific patient in assessing the significance of this finding, as in older patients, especially in males, a partially empty non-enlarged sella is not only common but normal.

Venous sinus stenting has been reported in case series and also being trialed .  The treatment is controversial as to whether apparent venous sinus stenosis is the cause or the effect of idiopathic intracranial hypertension . Spontaneous resolution of apparent stenosis is recognized .

Other causes of intracranial hypertension and papilledema should be sought. Causes of venous obstruction (e.g. venous sinus thrombosis and venous outflow obstruction in the neck) can very closely mimic the intracranial findings.

Additionally, in patients with prominent cerebellar tonsillar ectopia, the possibility that all findings are in fact due to a Chiari I malformation should be considered, particularly as there is substantial overlap in the demographics and clinical presentation of the two patient groups . It has even been suggested that some cases of symptomatic intracranial hypertension are secondary to a Chiari I malformation . Importantly, however, every attempt should be made to distinguish between the two entities as treatment is different and symptom relief for patients with idiopathic intracranial hypotension with posterior fossa decompression is insignificant .