Classic look
to a keratocyctic odontogenic tumor in the right mandible in the place of a former wisdom tooth. Unicystic lesion growing along the bone. Lesion was seen by oral surgeon on routine panoramic radiography without any symptoms.
Wikipedia • CC BY 3.0 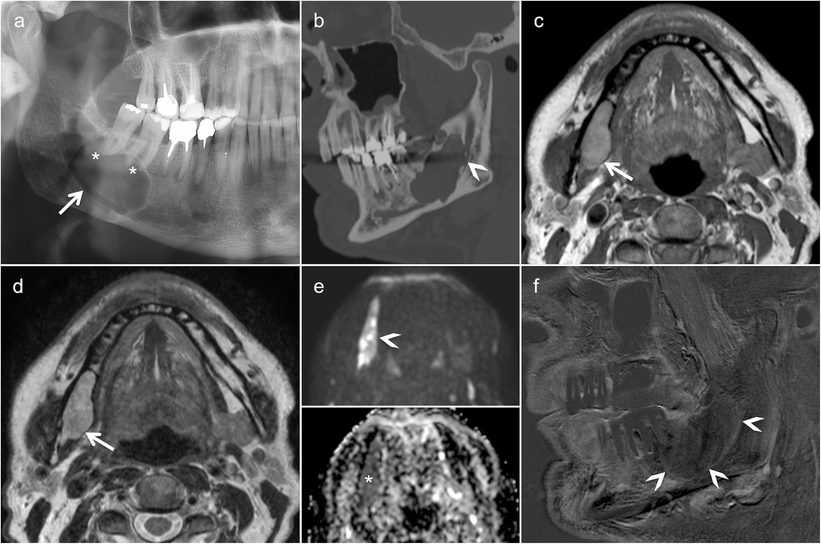 Odontogenic keratocysts (OKC), previously known as keratocystic odontogenic tumors (KCOT or KOT), are benign cystic lesions involving the mandible or maxilla and are believed to arise from dental lamina. Whether these lesions are developmental or neoplastic is controversial, with 2017 WHO classification placing it back into the development lesion category. They are locally aggressive and tend to recur after excision.

On imaging, they typically appear as an expansile solitary unilocular lesion extending longitudinally in the posterior portions of the mandible. Although the majority are solitary, in 5-10% of cases multiple KOTs will be present: an associated condition such as basal cell nevus syndrome should be considered in these cases.

Predominantly in younger patients (2-3 decades) and may be seen in either the body or ramus of the mandible (~70% of all keratocystic odontic tumors), or maxilla comprising 5-10% of all jaw cysts. There may be a male predilection.

Commonly discovered incidentally. When symptomatic, jaw swelling and pain are common symptoms associated with these tumors . Less commonly, trismus and paresthesia may occur.

They originate from epithelial cell rests (stratified squamous keratinizing epithelium) found along the dental lamina and periodontal margin of the alveolus of the mandible . Inflammation may impede histologic characterization.

They are typically seen as a solitary, radiolucent, unilocular, expansile lesion with smooth, corticated borders . These cortices are often scalloped around the roots of teeth. Three-quarters of lesions are located in the posterior mandible. When in the mandible, they typically grow along the length of the bone with minimal buccolingual expansion. In the maxilla, they expand into the maxillary sinus. They average 3 cm in size.

The appearance and location can vary . If associated with the crown of an unerupted/impacted tooth, they can mimic a dentigerous cyst. If associated with the roots of a non-vital tooth, they can mimic a radicular cyst. If large enough, they will resorb the roots of adjacent teeth. They may occasionally appear septated, making the distinction from ameloblastoma difficult.

They are locally aggressive. Treatment is often with marsupialisation/enucleation/excision +/- aggressive curettage. However, they can have a very high recurrence rate (30-60%), and follow-up is essential.

It was first described by H.P. Philipsen in 1956 as an odontogenic keratocyst.