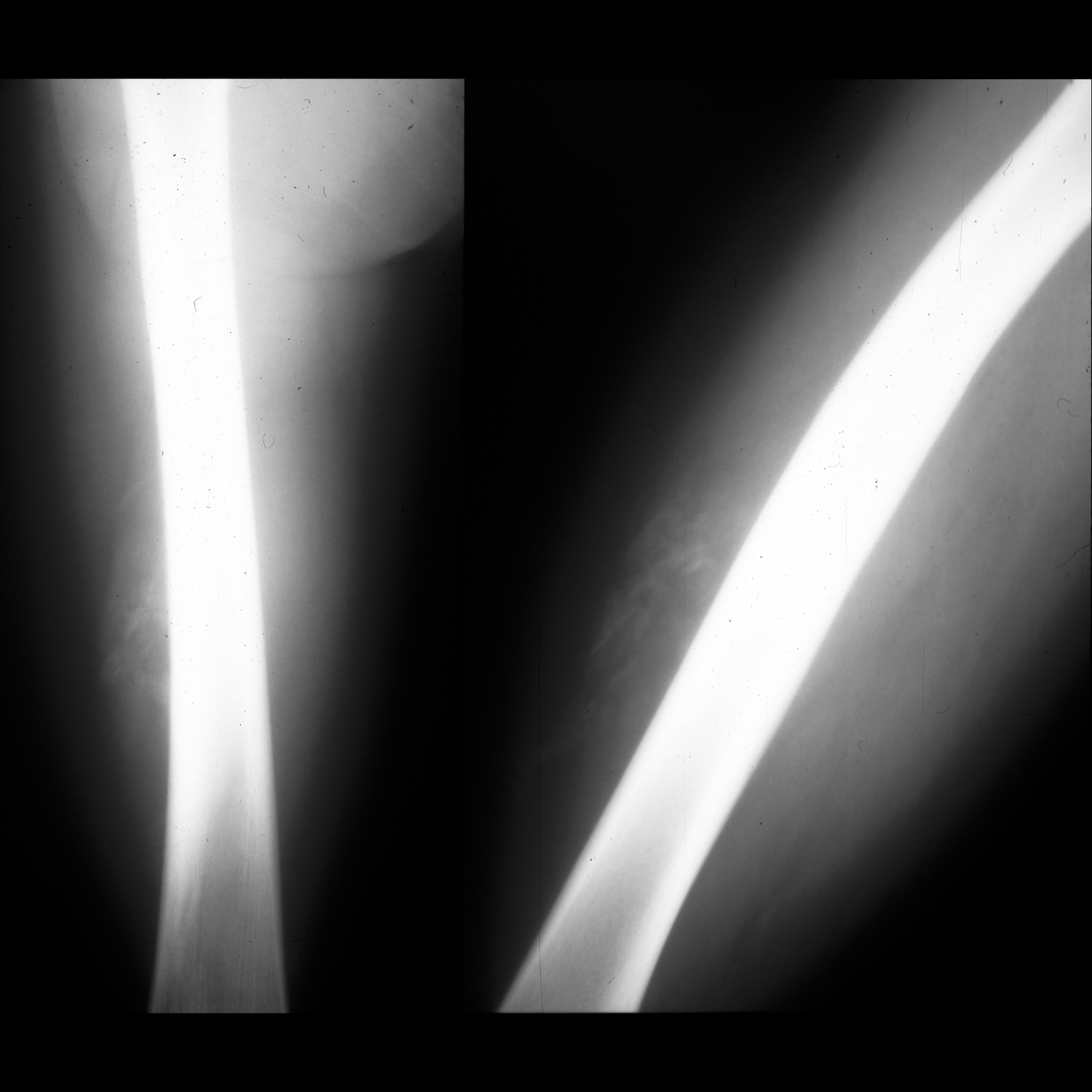 Teenager hit
in the right thigh 1 month ago with a shot put. AP (left) and lateral (right) radiographs of the femur show an amorphous area of calcification anterior and lateral to the femur.The diagnosis was myositis ossificans.
pediatricimaging.org • CC-by-nc-sa 4.0
Hallo!
Radiopaedia • CC-by-nc-sa 3.0 • de

Myositis ossificans (MO) is the most common form of heterotopic ossification usually within large muscles. Its importance stems in large part from its ability to mimic more aggressive pathological processes. Myositis ossificans is one of the skeletal “don’t touch” lesions.

There are some conditions that are related to, or share a similar name to, myositis ossificans :

The remainder of this article focuses on the former. Myositis ossificans progressiva, panniculitis ossificans and fibro-osseous pseudotumor of the digits are discussed separately.

Typically presents as a painful, tender, enlarging mass, which in 80% of cases is located in large muscles of the extremities, often following recognized local trauma, although a definite traumatic event is not always recalled . In the case of paraplegics, recognized episodes of trauma are often absent, and the disease occurs particularly around the knees and hips .

There are three well-described histopathological stages :

It has a zonal organization :

Unfortunately, the histologically of myositis ossificans can appear similar to osteosarcoma, and thus, can lead to inappropriate management.

The typical radiographic appearance of myositis ossificans is circumferential calcification with a lucent center and a radiolucent cleft (string sign) that separates the lesion from the cortex of the adjacent bone.

Initially calcification is absent but there may be soft tissue swelling. Calcification usually becomes apparent within 2-6 weeks, and the lesion reaches the classic well-circumscribed peripherally calcified appearance by two months. Over the following 4 or so months, they typically become smaller and denser .

The cleft between it and the subjacent bone may be difficult to see on plain radiographs.

CT appearances are similar to those of plain radiography, demonstrating mineralization proceeding from the outer margins towards the center. The cleft between it and the subjacent bone is usually visible.

The peripheral rim of mineralization is usually visible within 4-6 weeks .

MRI appearances change with the age of the lesion.

Early features can be misleading because the peripheral calcification is not well seen, and edema in the soft tissues may extend beyond the often inapparent calcific rim.

Non-specific increased bone scan uptake on flow and blood pool images is seen early on in the development of the lesion and gradually decreases as the lesion matures . Increased uptake on delayed phase is typical.

Myositis ossificans is benign and there is no compelling evidence that malignant degeneration ever occurs . As such treatment is reserved for symptomatic lesions, and surgical resection is usually curative.