PLEOMORPHIC
XANTHOASTROCYTOMA As in this computerized tomographic scan, the classic radiographic appearance is one of a superficially situated tumor, here a mural nodule, associated with an underlying cyst.
Wikipedia • Public domain 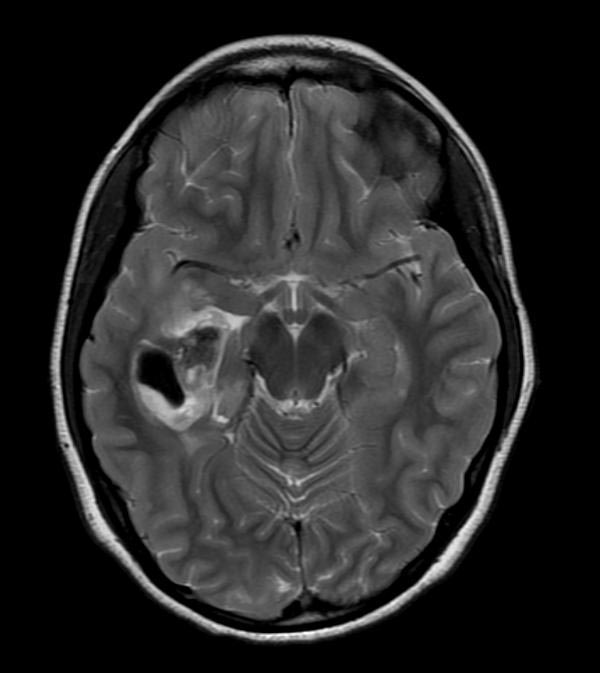 They usually present as cortical tumors with a cystic component and vivid contrast enhancement. Features of slow growth may be present, such as no surrounding edema and scalloping of the overlying bone. A reactive dural involvement expressed by a dural tail sign can be found. Calcifications are rare.

They are rare tumors accounting for only 1% of primary brain tumors . Typically these tumors are found in young patients (children or young adults), with a peak incidence in the second and third decade of life (10-30 years) .

As these tumors have a predilection for the temporal lobe, they most frequently present with seizures (~75% of cases) . Other findings include dizziness, and headache or rarely patients are asymptomatic .

Pleomorphic xanthoastrocytomas are almost invariably (98%) located supratentorially, typically located superficially (peripherally) abutting the leptomeninges, involving the cortex and overlying leptomeninges but actual dural involvement is rare. Approximately half are located in the temporal lobe, with the remainder of the lesions more common in the frontal than the parietal lobes .

Macroscopically these tumors appear well-circumscribed, often with a cystic component and involvement of the overlying leptomeninges .

Microscopically the margins are not as well defined. The histological features are variable (thus the term 'pleomorphic') with spindle cells, polygonal cells, multinucleated cells and lipid-laden xanthomatous astrocytes are all identified . Even more pleomorphic is the appearance of the nuclei, with common nuclear inclusions, and highly variable nuclear size .

Pleomorphic xanthoastrocytomas, as well as pilocytic astrocytomas (and many non-CNS tumors), exhibit BRAF mutations . The only reported association is with neurofibromatosis type 1, although this is not a strong association .

Pleomorphic xanthoastrocytomas appear as a solid enhancing nodule, frequently with a peripheral eccentric cystic component (50-60%). Due to their peripheral location and leptomeningeal involvement, they are one of the tumors that may exhibit a dural tail. This is reactive rather than due to true direct dural invasion, which is rare . As these lesions are very slow growing, superficial remodeling of the adjacent skull is characteristic and vasogenic edema is variable .

Pleomorphic xanthoastrocytomas are typically hypodense or isodense and may be well or poorly demarcated, usually with little or no surrounding edema. Calcification is rare. Due to its superficial location it may cause scalloping of the overlying bone .

Despite vivid enhancement, pleomorphic xanthoastrocytomas are usually avascular on angiography

Although prognosis is good following surgical excision, with a 5-year survival of 90% and 5-year-disease-free-survival of 70% , local recurrence and malignant transformation (to WHO grade III lesion or GBM) are common, encountered in up to 20% of cases .

Neither radiotherapy nor chemotherapy has a significant effect on these tumors , although radiotherapy may have a role to play in patients with incomplete resection or those with recurrent disease .

Main differential diagnosis is that of other cortical tumors, with helpful distinguishing features including :