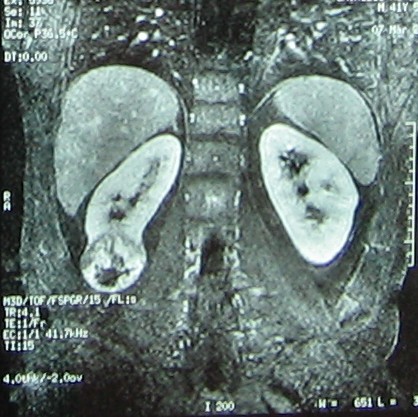 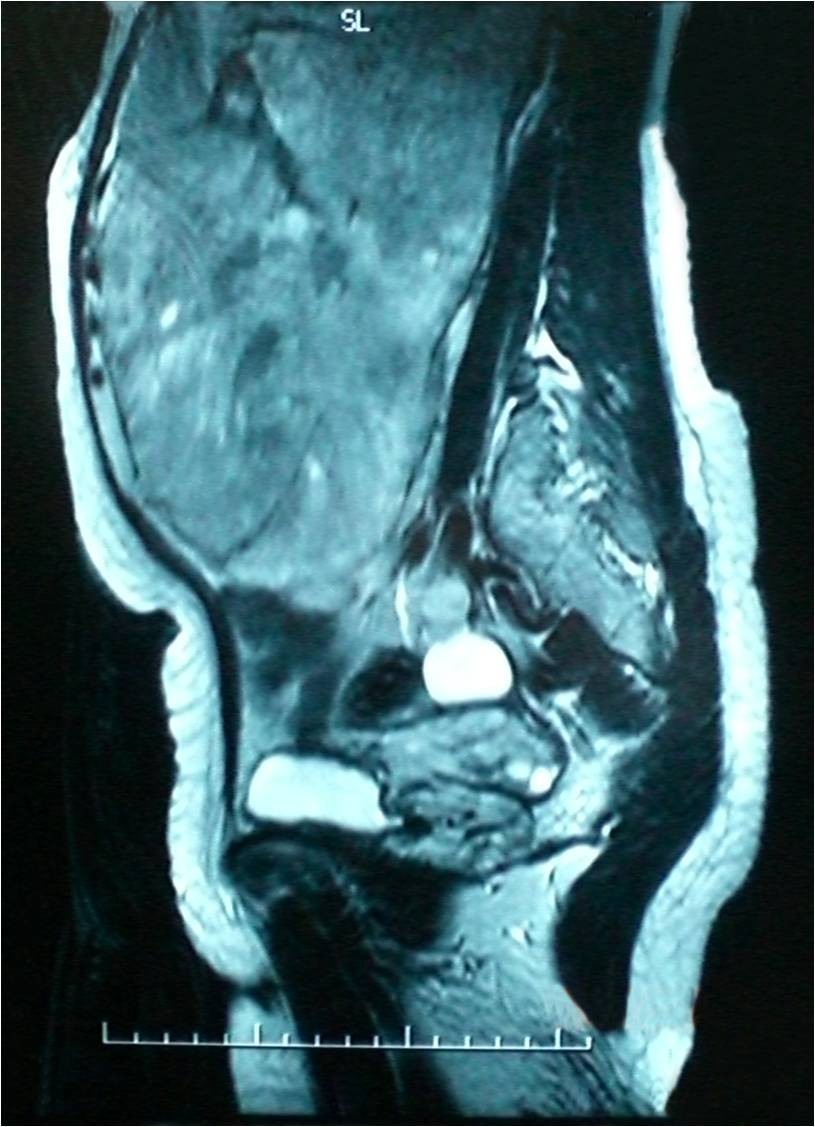 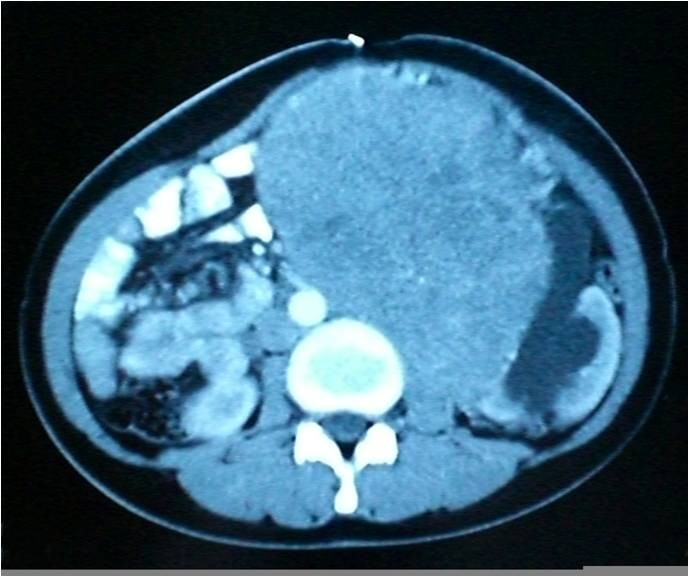 Giant renal
oncocytoma: a case report and review of the literature. A contrast-enhanced axial computed tomography image shows a huge, capsulated, heterogeneously enhancing mass originating from the lower pole of the left kidney. Note the moderate hydronephrosis and lateral displacement of the left ureter.
jmedicalcasereports.biomedcentral.com • CC-by-2.0 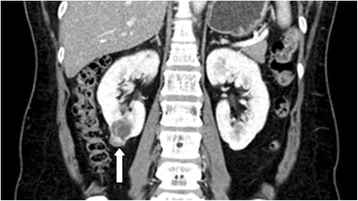 A
back-to-back tumor composed of papillary renal cell carcinoma and oncocytoma treated by laparoscopic partial nephrectomy: a case report. Location of the tumor visualized by computed tomography. The arrow shows a well- marginated, multiseptated mass in the lower pole of the right kidney
jmedicalcasereports.biomedcentral.com • CC-by-4.0 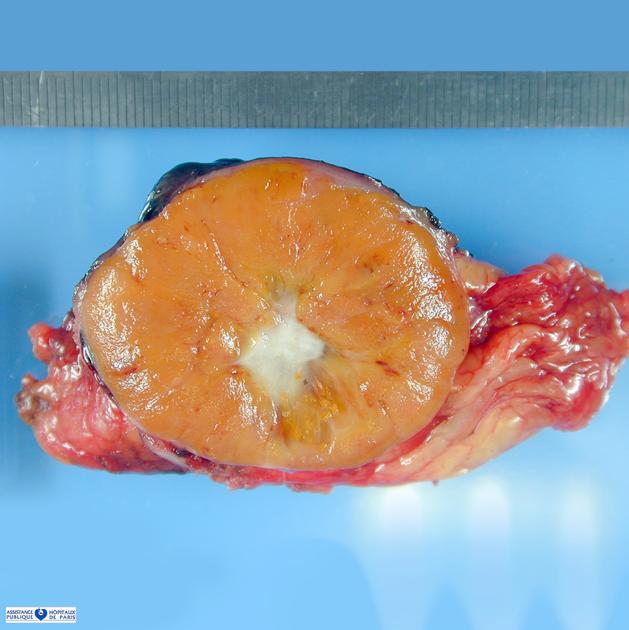 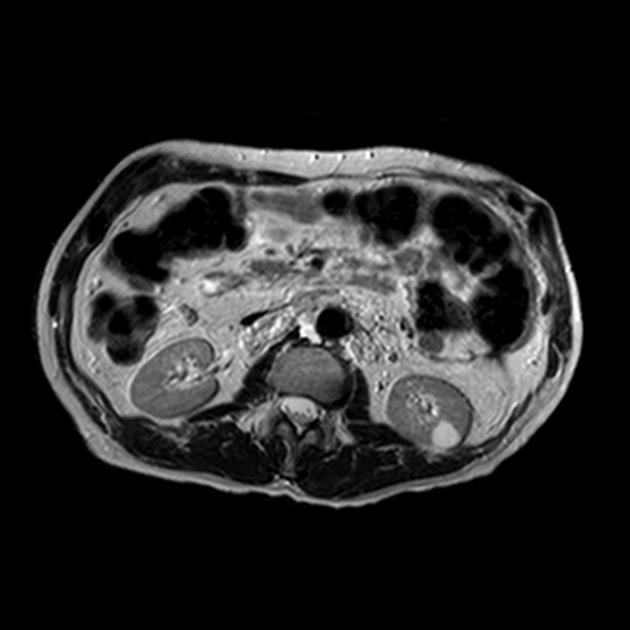 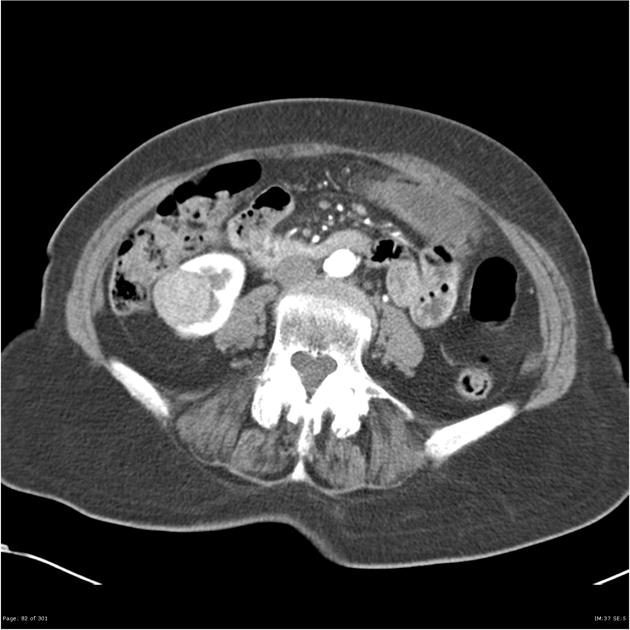 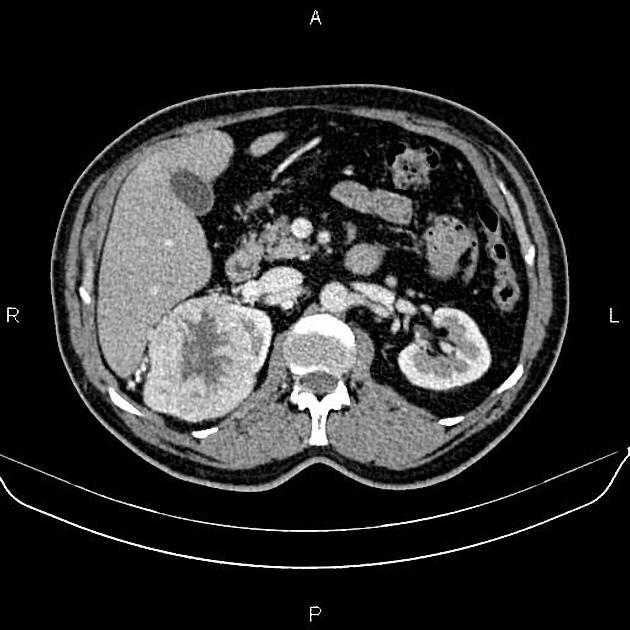 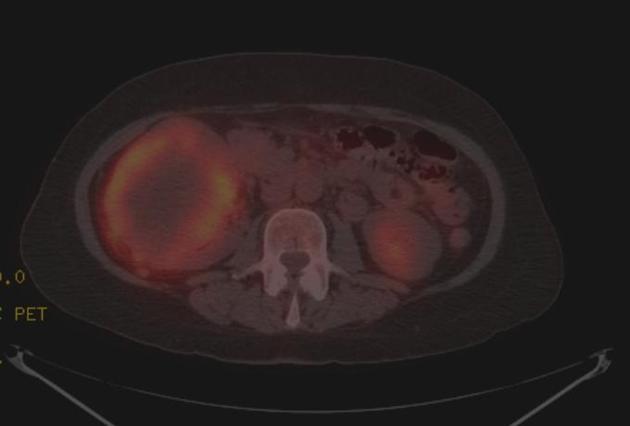 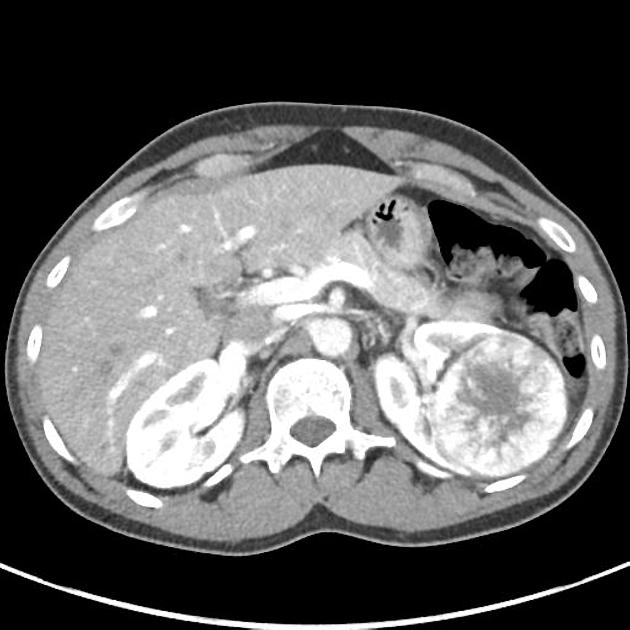 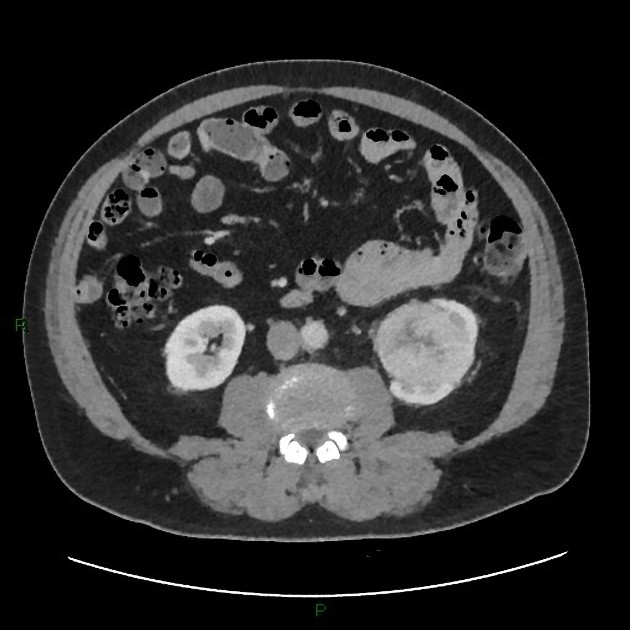 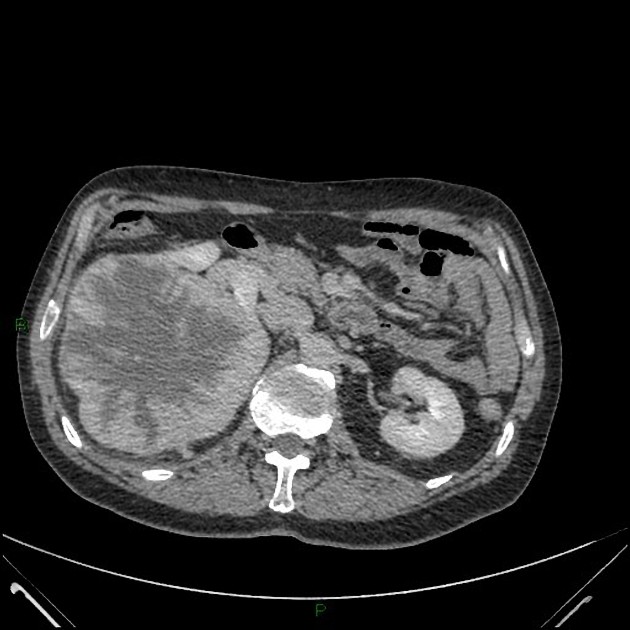 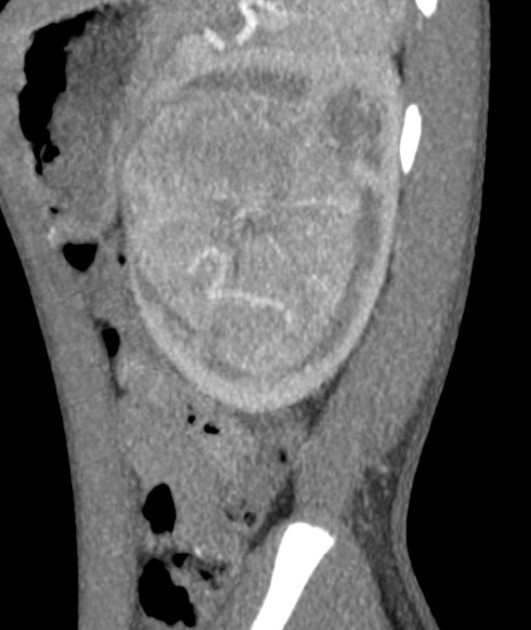 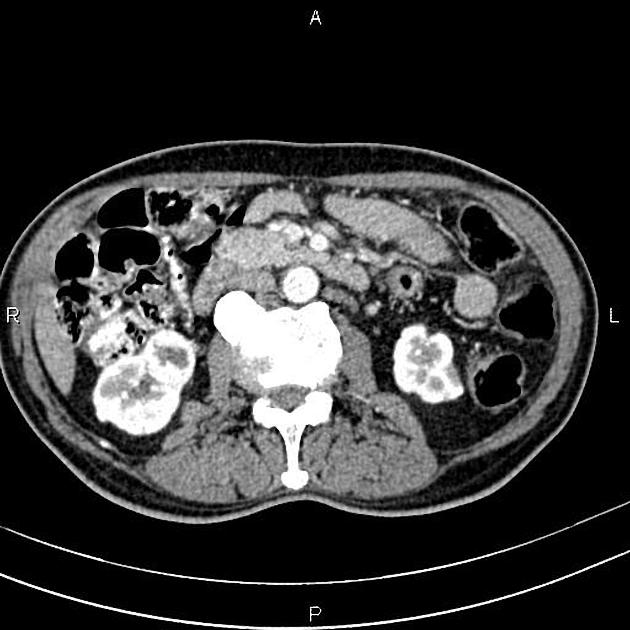 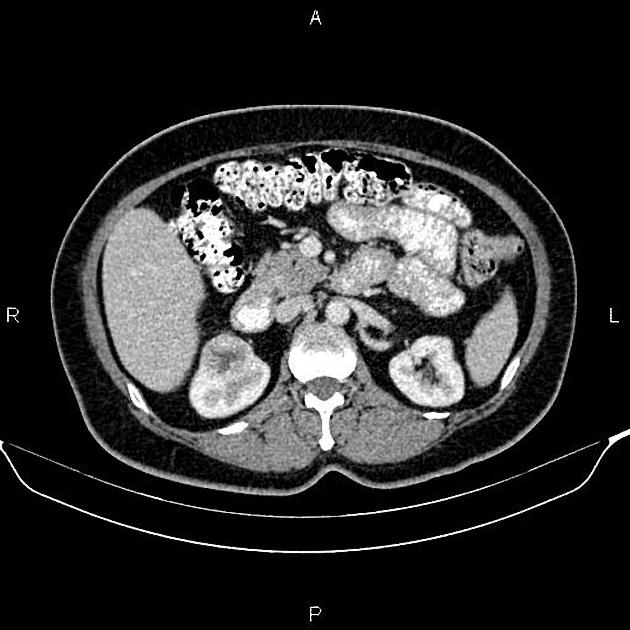 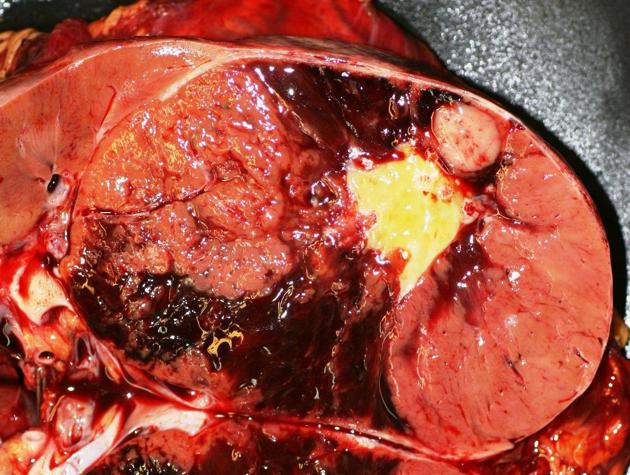 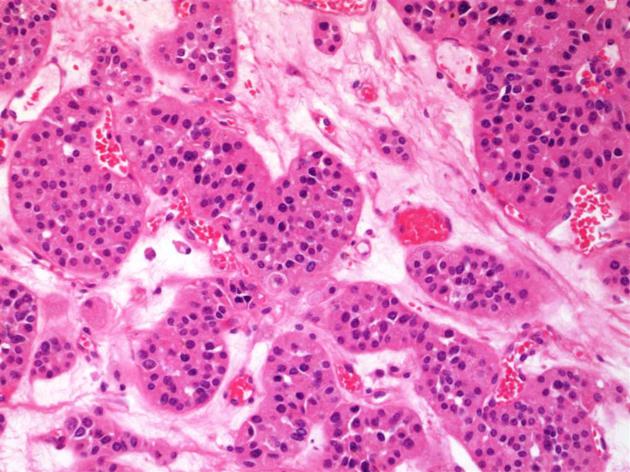 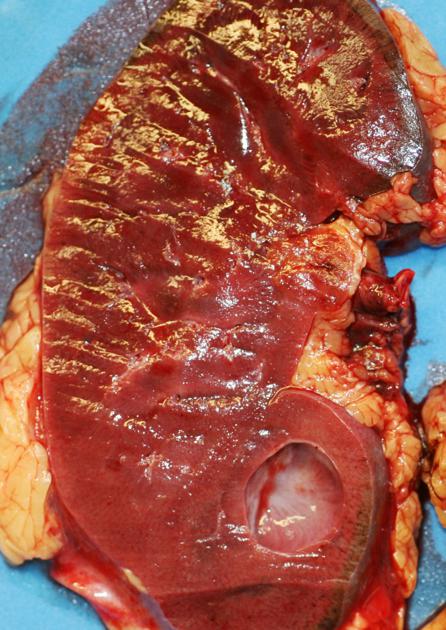 Renal oncocytomas are relatively benign renal tumors. The main clinical importance of this lesion is the difficulty in pre-operatively distinguishing it from renal cell carcinomas, as epidemiology, presentation, imaging and even histology can be very similar.

Renal oncocytomas account for approximately 5% of resected primary adult epithelial renal neoplasms. They typically present in the 6 to 7 decades with a peak incidence at 55 years of age. There is 2:1 male predilection . Unfortunately, these demographics are similar to renal cell carcinoma.

Macroscopically oncocytomas are tan in color, similar to the renal cortex, or darker brown (mahogany brown). A rim of compressed normal renal parenchyma is sometimes seen, forming a pseudo capsule . Macroscopic hemorrhage is seen in a minority of patients (~20%) .

Oncocytomas are believed to originate from intercalated tubular cells of the collecting tubules and are composed of large, swollen eosinophilic cells of protuberant mitochondrial components . A biopsy is usually unhelpful in distinguishing an oncocytoma from a renal cell carcinoma, as the latter may also have oncocytic elements . Necrosis is usually absent .

Unfortunately, the imaging appearance of oncocytomas is difficult to distinguish from renal cell carcinoma, and as such, they are usually resected . They appear as sharply demarcated lesions of variable size, but often large at presentation. A potentially helpful sign is the presence of a sharp central stellate scar, which although characteristic of oncocytomas, is only seen in a third of cases . Additionally, renal cell carcinomas may also demonstrate a central scar .

The only reliable feature is evidence of metastasis or aggressive infiltration into adjacent structures, in which case the diagnosis of renal cell carcinoma can be safely made.

It is important to carefully evaluate both kidneys, as up to 13% of patients have multiple oncocytomas (renal oncocytosis), and up to 32% have concurrent renal cell carcinomas .

Ultrasound demonstrates a well-circumscribed mass with echogenicity similar to the rest of the kidney. Occasionally a central scar may be visible .

May demonstrate a spoke wheel pattern, of peripheral circumferential vessels penetrating towards the center of the lesion, which again, although characteristic of oncocytomas, may also be seen in renal cell carcinomas.

During the capillary phase, the tumor demonstrates a homogeneous blush, similar to normal renal parenchyma, lacking the 'bizarre' vascularity typically seen in RCCs . A lucent avascular rim may be seen due to the compressed pseudo capsule .

Microaneurysms have occasionally been reported .

Although renal oncocytomas are benign lesions and metastases are extremely uncommon , as they cannot be confidently pre-operatively distinguished from renal cell carcinomas, they are surgically resected. If the diagnosis is suspected pre-operatively then renal sparing surgery can be performed.