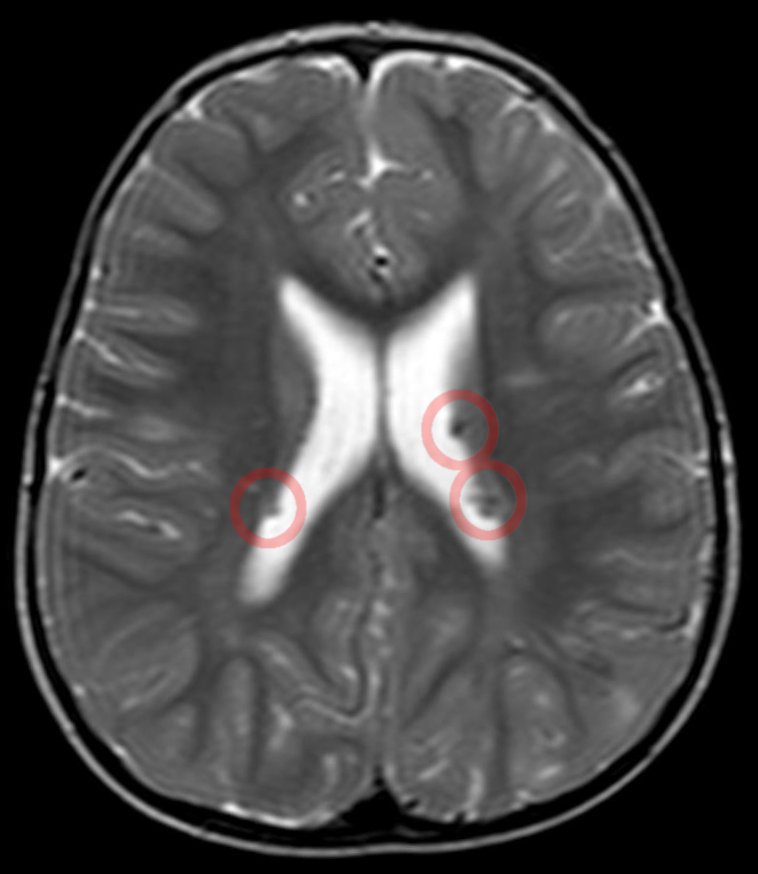 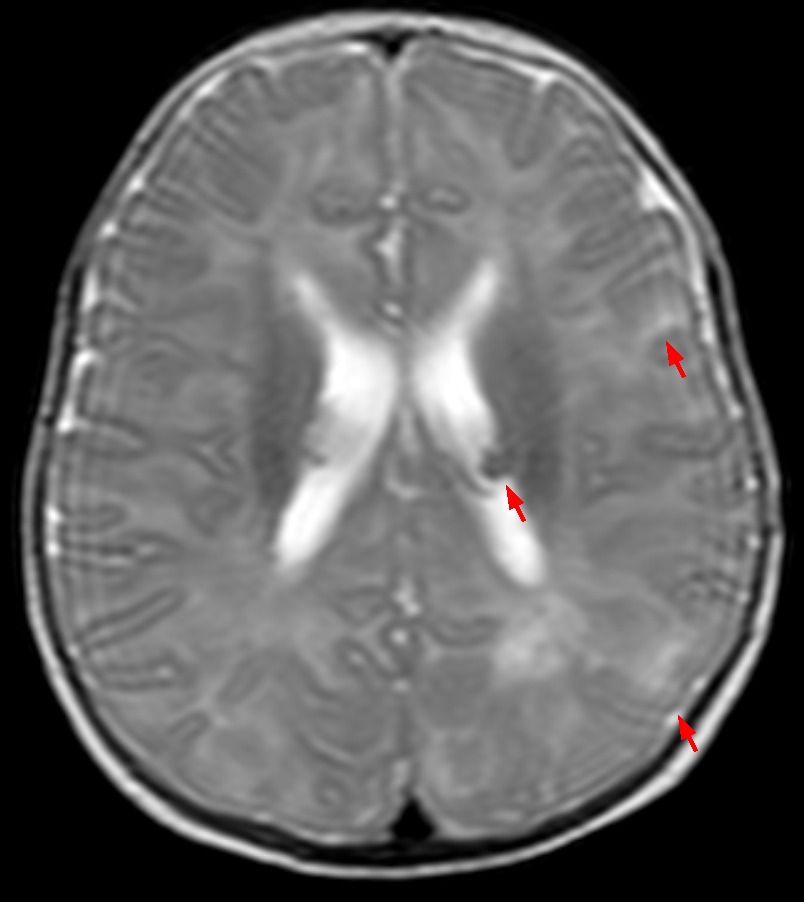 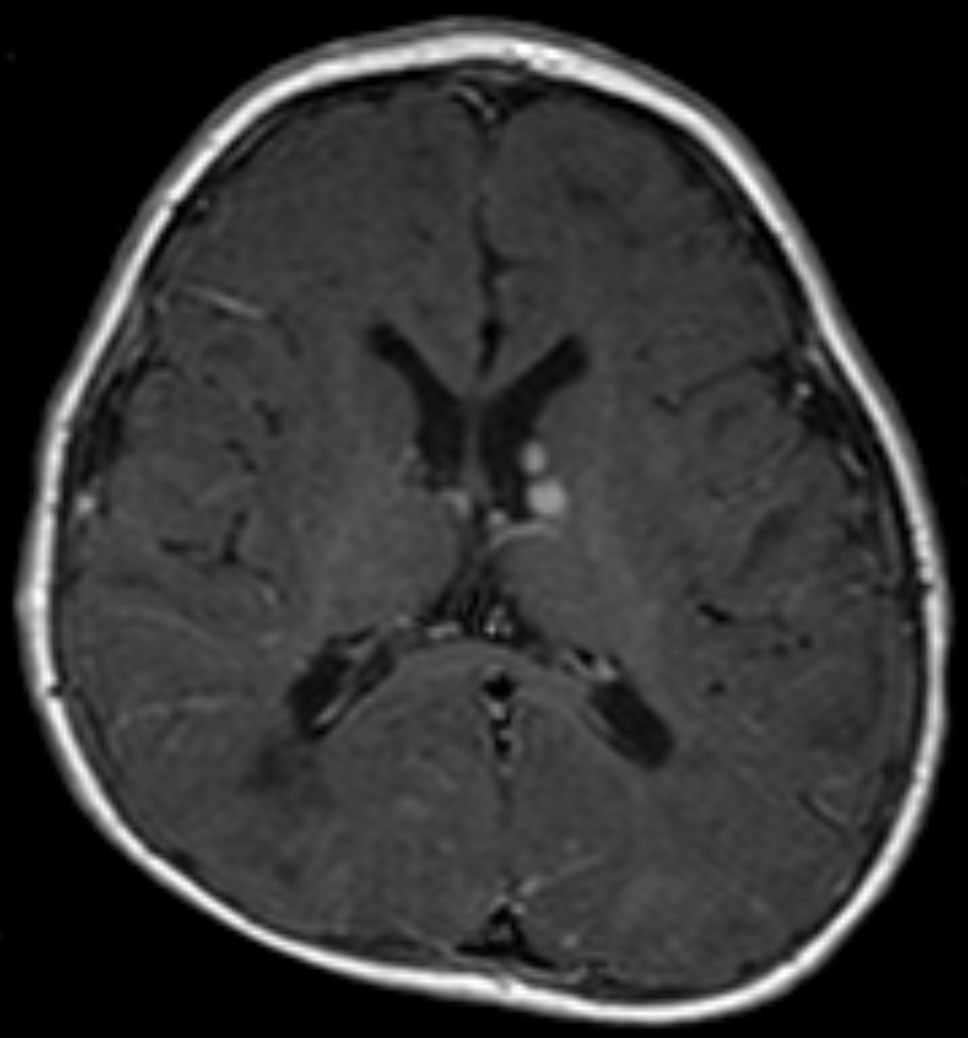 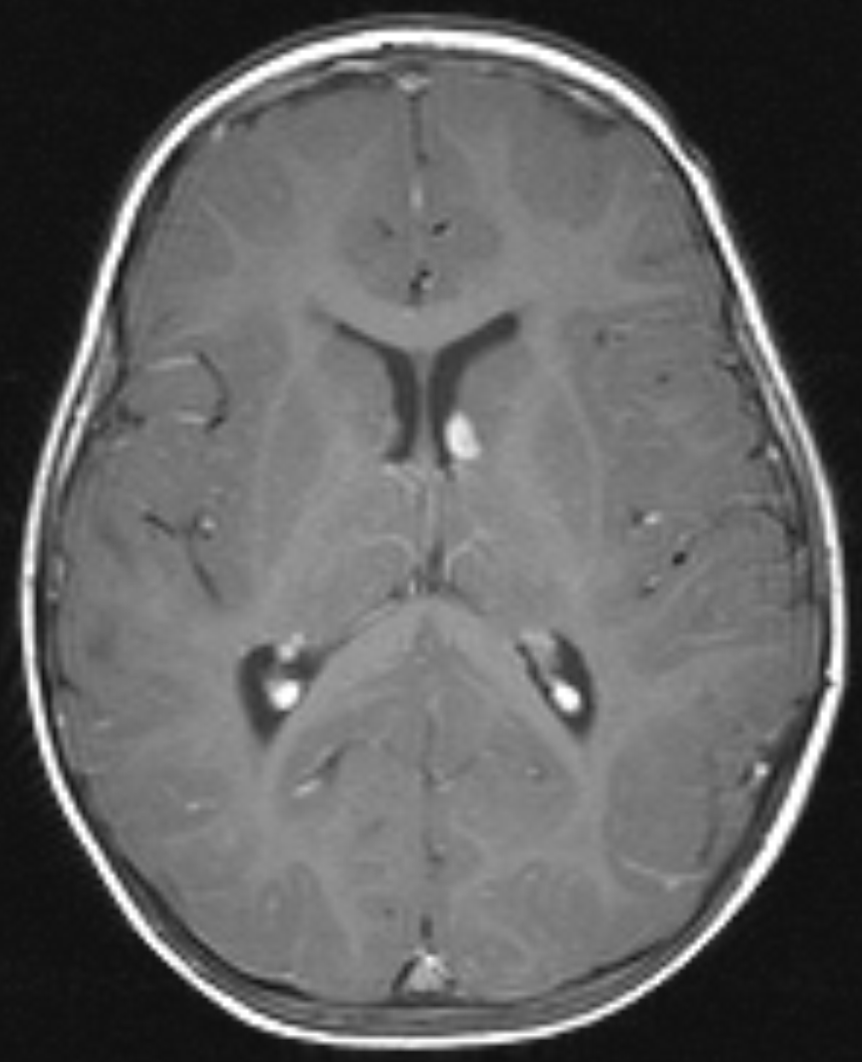 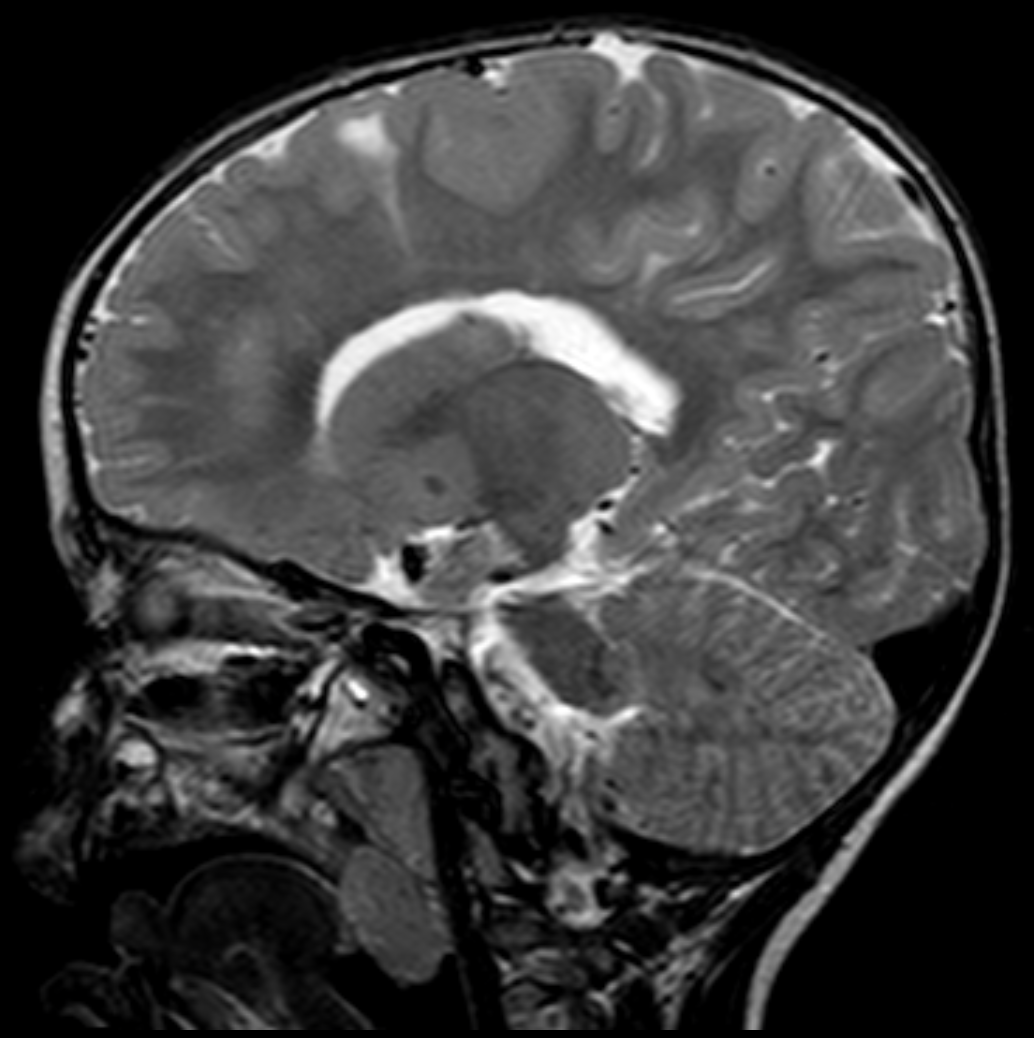 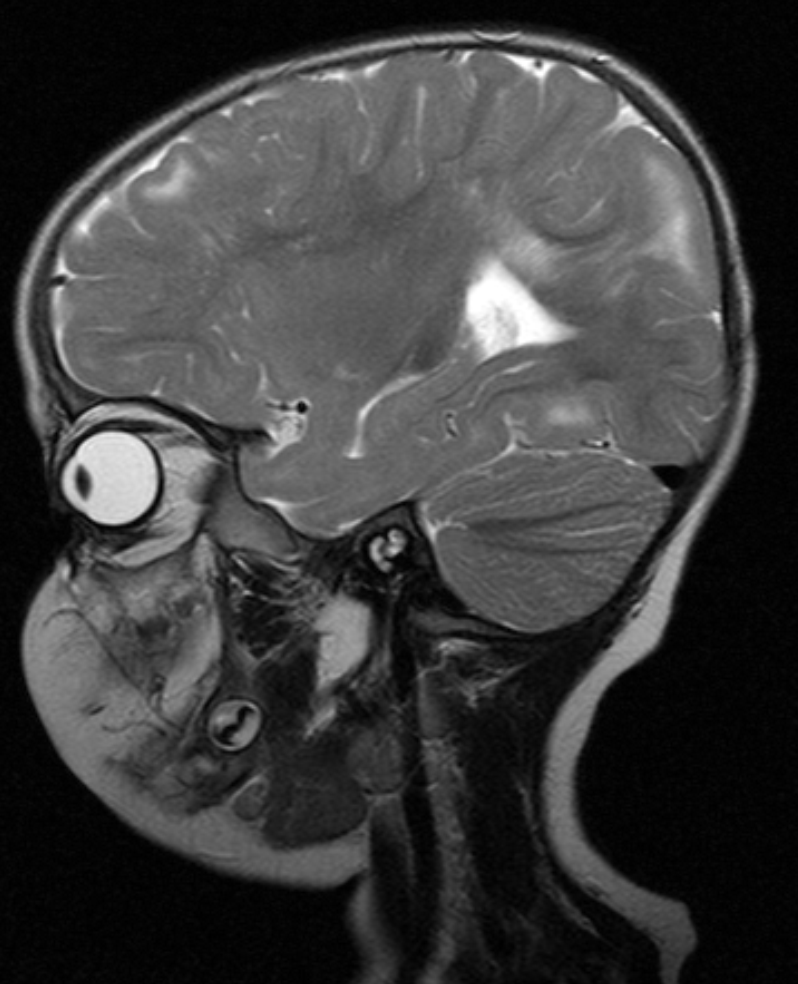 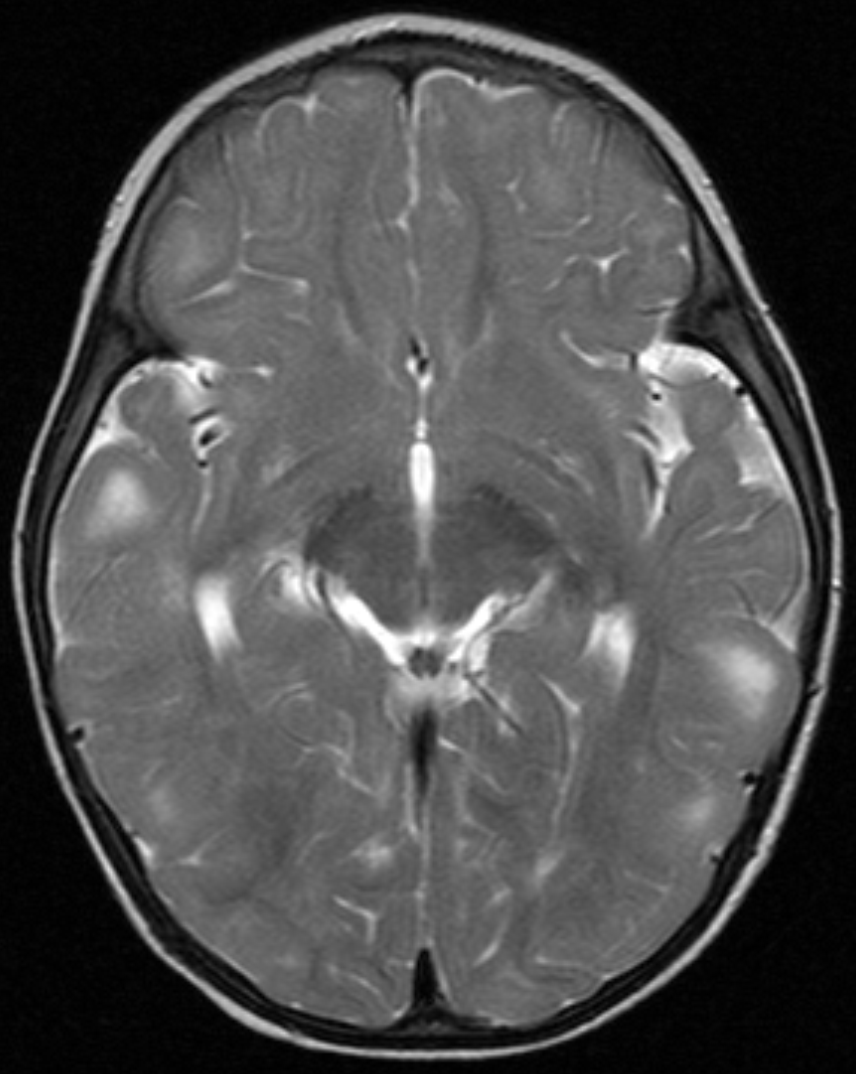 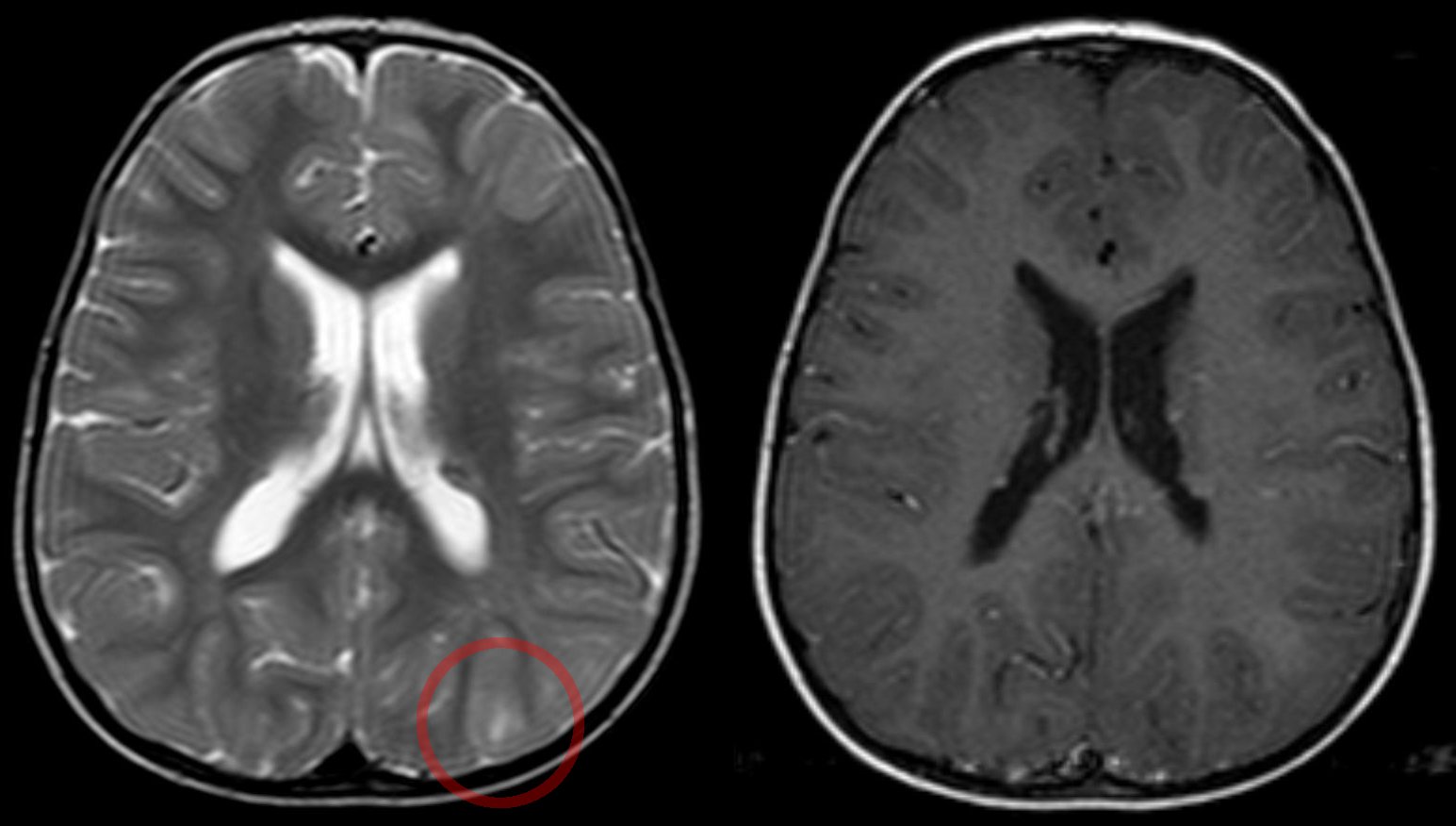 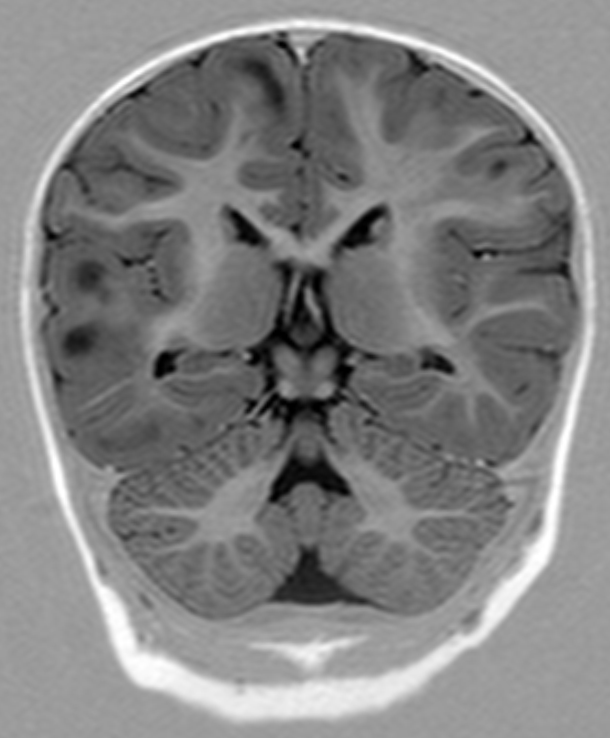 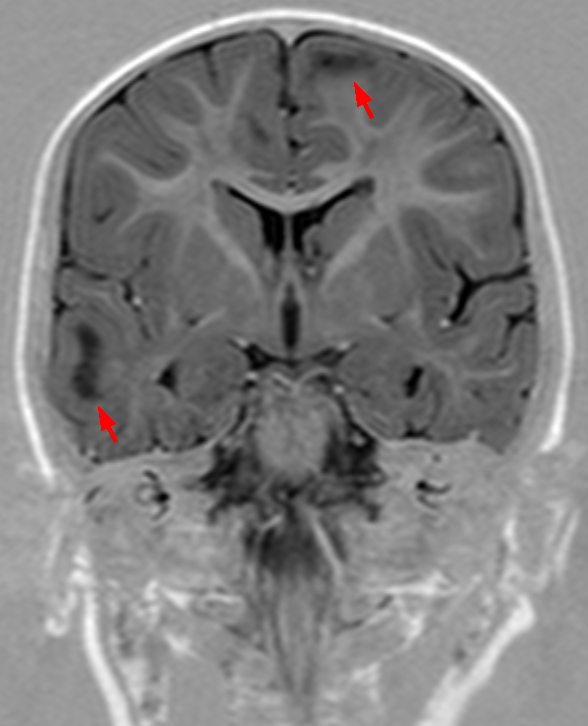 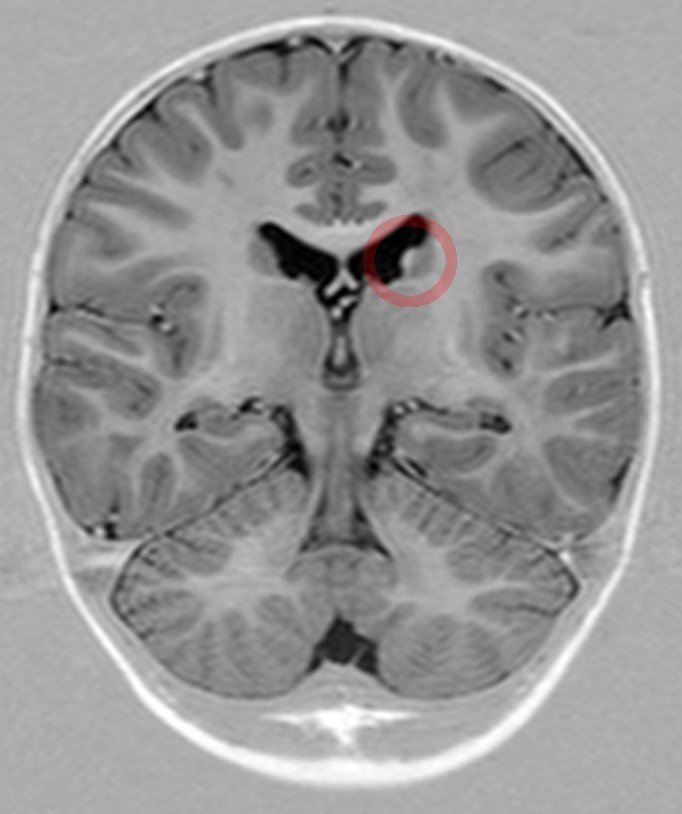 Teenager with
an abdominal mass. Axial CT without contrast of the abdomen shows the right kidney to be normal in size and to contain multiple small low density lesions that when measured demonstrate negative Hounsfield units. The left kidney, which is massively enlarged, also contains multiple small low density lesions as well as one extremely large low density lesion in its anterior aspect.The diagnosis was angiomyolipoma of the kidneys in a patient with tuberous sclerosis.
pediatricimaging.org • CC-by-nc-sa 4.0
Hallo!
Radiopaedia • CC-by-nc-sa 3.0 • de

Tuberous sclerosis was classically described as presenting in childhood with a triad (Vogt triad) of:

The full triad is only seen in a minority of patients (~30%). Therefore, diagnostic criteria have been developed to aid the diagnosis of tuberous sclerosis.

When patients do not meet these criteria, they are sometimes referred to as manifesting a forme fruste of the condition.

Spontaneous mutations account for 50-86% of cases , with the remainder inherited as an autosomal dominant condition. In the majority of such cases (80%) the mutation has been narrowed down to two tumor suppressor genes, both part of the mTOR pathway :

Tuberous sclerosis has a significant number of manifestations, involving many organ systems. The most common radiographic manifestations are:

Cutaneous lesions are present in ~95% of cases, but are rarely appreciated radiographically :

Treatment of seizures is essential and depending on the degree of intellectual disability, supportive care may be required. Treatment will be dictated by individual manifestations (e.g. subependymal giant cell astrocytomas, or retroperitoneal hemorrhage from renal angiomyolipoma).

Approximately 40% of patients die by age 35 from complications of one or more of the manifestations mentioned above .

Désiré-Magloire Bourneville (1840-1909) was a French neurologist that is notable by the initial description of tuberous sclerosis (“Bourneville disease”) in 1880.

John James Pringle (1855-1922) was a Scottish dermatologist that also studied this disease leading some books to refer to it as "Bourneville-Pringle disease”.

Heinrich Vogt (1875-1936) was a German neurologist that is notable by establishing the three pathognomonic clinical signs for tuberous sclerosis that became known as "Vogt triad”.