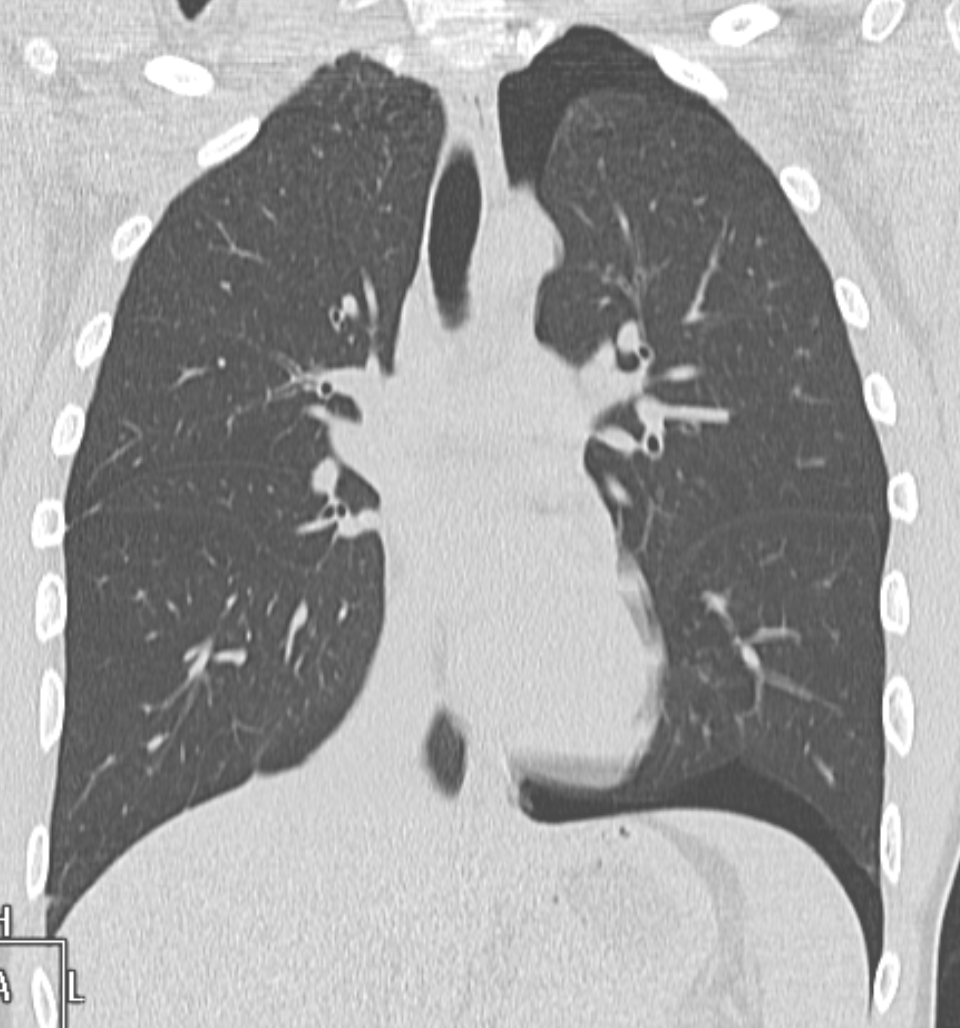 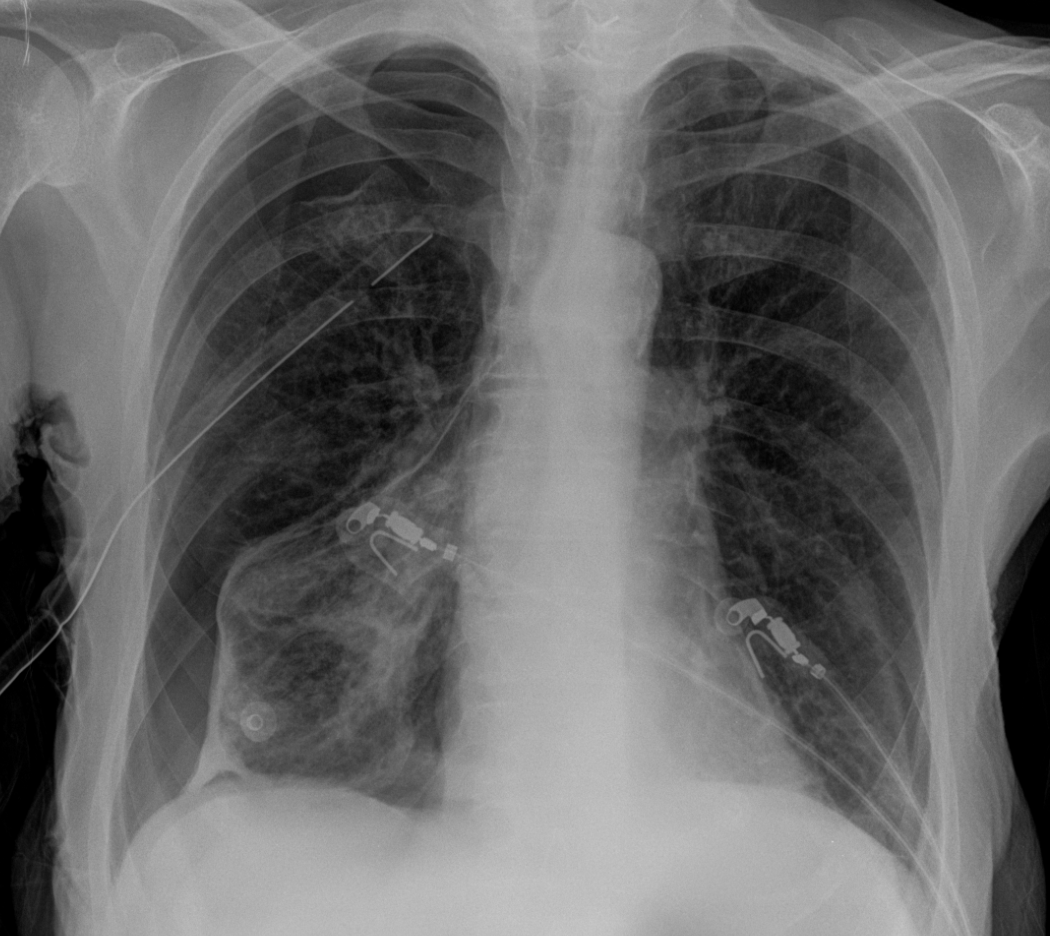 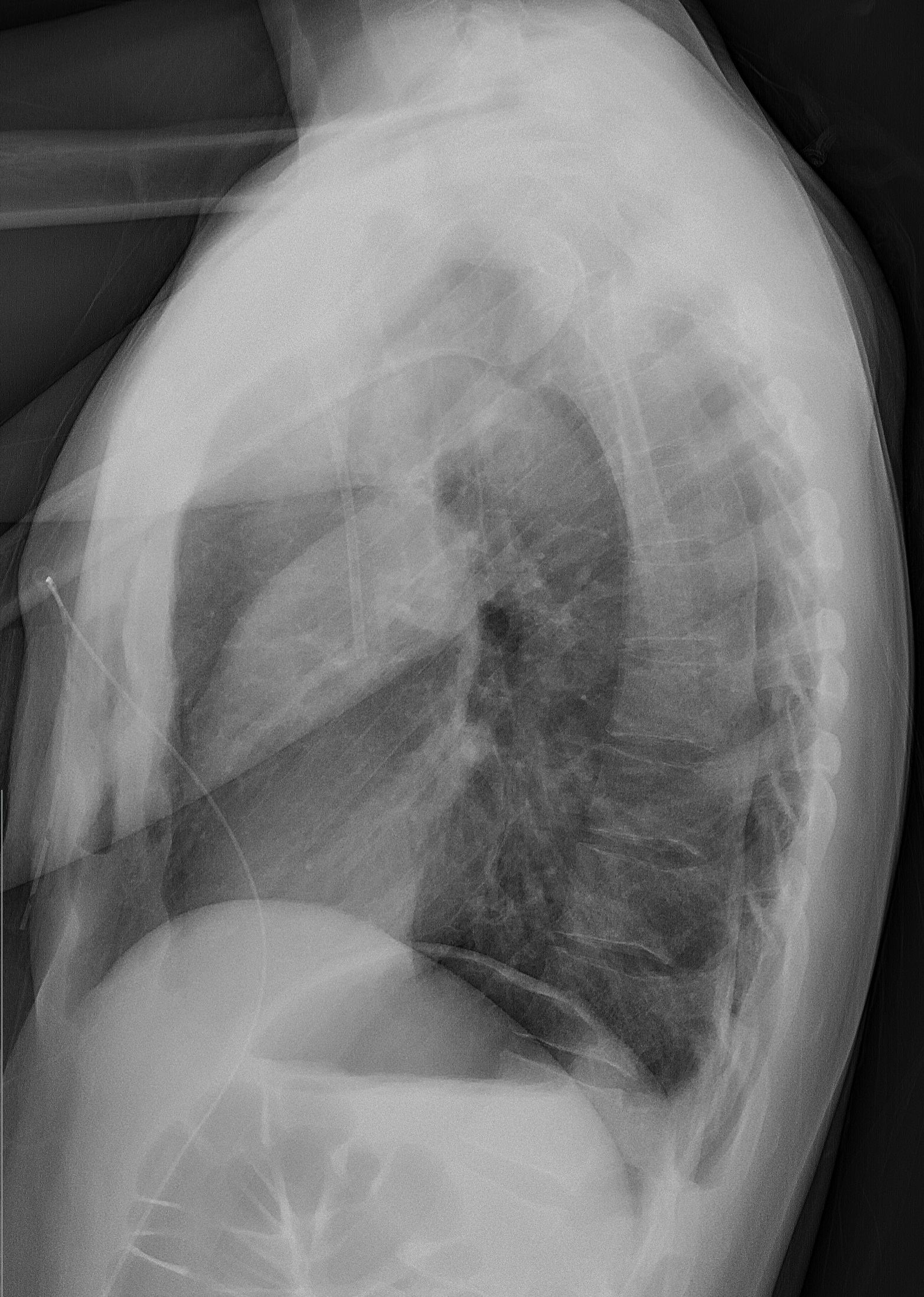 This is taken
of a 31 year old woman who had a port inserted for chemotherapy against breast cancer (hence, both breasts have been surgically removed). During inspiration, only subtle pneumothorax is seen in the apical part of the left thoracic cavity. It can practically be diagnosed only by the absence of vascularity in the most apical lung segment. It is seen more clearly posteriorly on lateral X-ray. During expiration, the pneumothorax takes up approximately 50% of the cavity.
Wikipedia • CC0

Pneumothorax, sometimes abbreviated to PTX, (plural: pneumothoraces) refers to the presence of gas (often air) in the pleural space. When this collection of gas is constantly enlarging with resulting compression of mediastinal structures, it can be life-threatening and is known as a tension pneumothorax (if no tension is present it is a simple pneumothorax). An occult pneumothorax refers to one missed on initial imaging, usually a supine/semierect chest radiograph .

For those pneumothoraces occurring in neonates see the article on neonatal pneumothorax.

Presentation is variable and may range from no symptoms to severe dyspnea with tachycardia and hypotension. In patients who have a tension pneumothorax, presentation may be with distended neck veins and tracheal deviation, cardiac arrest and in the most severe cases, death.

It is interesting to note that some generalizations can be made in regards to the clinical presentation in primary versus secondary spontaneous pneumothoraces:

It is useful to divide pneumothoraces into three categories :

When the underlying lung is abnormal, a pneumothorax is referred to as secondary spontaneous. There are many pulmonary diseases which predispose to pneumothorax including:

A pneumothorax is, when looked for, usually easily appreciated on erect chest radiographs. Typically they demonstrate:

Described methods for estimating the percentage volume of pneumothorax from an erect PA radiograph include:

In cases where a pneumothorax is not clearly present on standard frontal chest radiography a number of techniques can be employed:

When imaged supine detection can be difficult: see pneumothorax in a supine patient, and pneumothorax is one cause of a transradiant hemithorax.

Provided lung windows are examined, a pneumothorax is very easily identified on CT, and should pose essentially no diagnostic difficulty. When bullous disease is present, a loculated pneumothorax may appear similar.

Treatment depends on a number of factors:

Estimating the size of pneumothorax is somewhat controversial with no international consensus. CT is considered more accurate than plain radiograph.

These can be used together to determine the best course of action. The following is based on the BTS guidelines for the treatment of pneumothorax; local protocols may differ:

In trauma patients, the "35 mm rule" seems to predict which patients can be safely observed. If the pneumothorax measures <35 mm (measuring the largest air pocket between the parietal and visceral pleura perpendicular to the chest well on axial imaging) in stable, non-intubated patients there was a 10% failure rate (i.e. requiring intercostal catheter insertion) during the first week .

In patients with recurrent pneumothoraces or who are at very high risk of having recurrent events and have a poor respiratory reserve, pleurodesis can be performed. This can either be medical (e.g. talc poudrage) or surgical (e.g. VATS pleurectomy, pleural abrasion, sclerosing agent) .

Usually, the diagnosis is straightforward, but occasionally other entities should be considered: