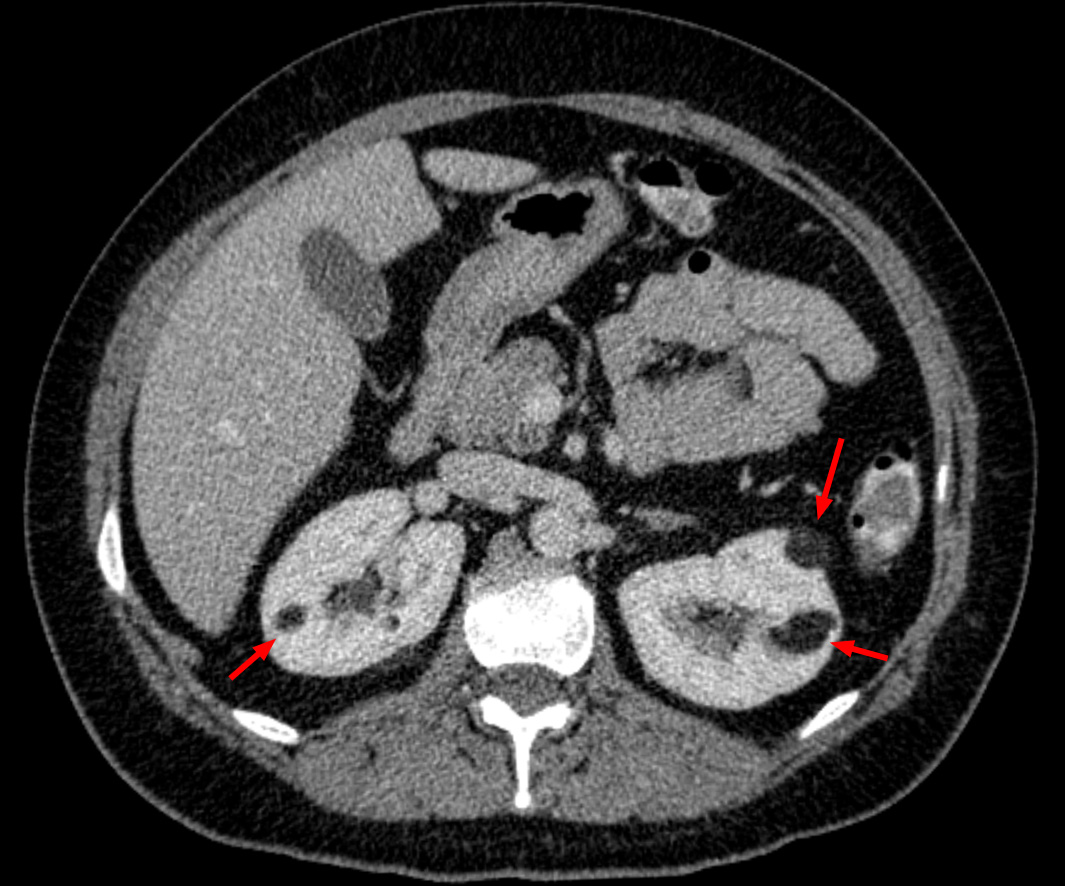 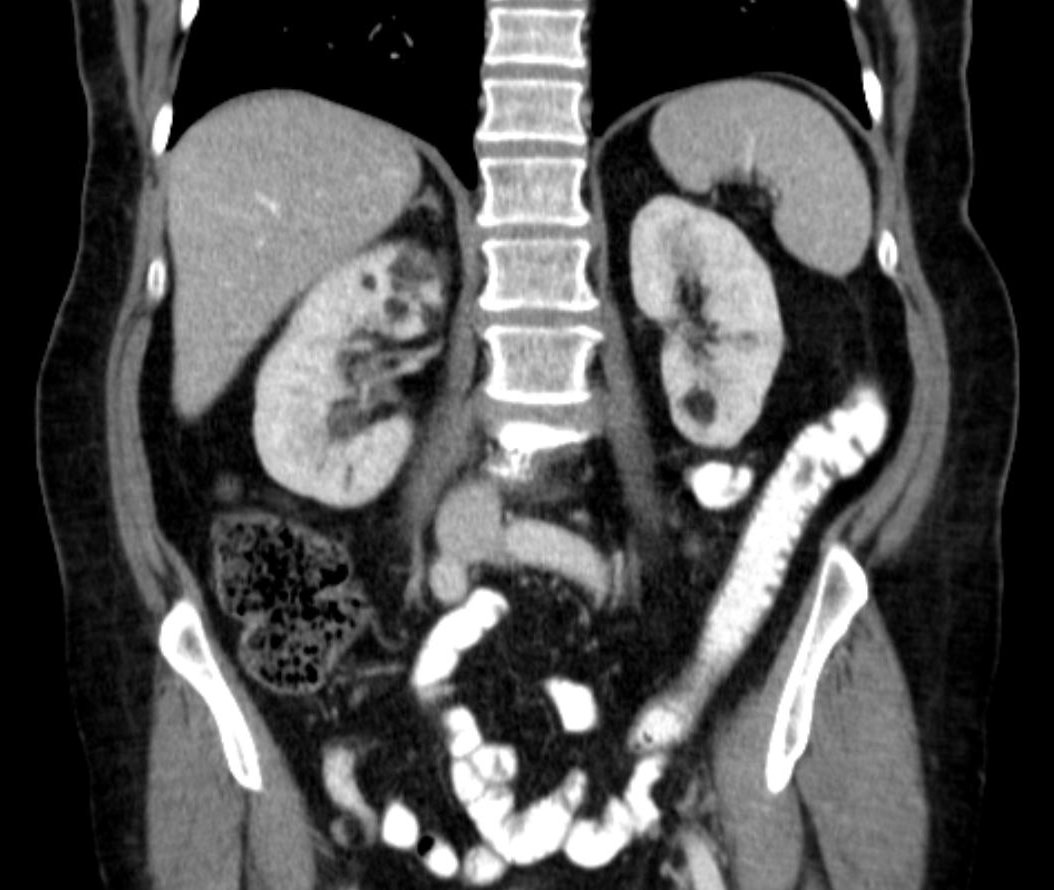 Renal angiomyolipomas (AML) are a type of benign renal neoplasms encountered both sporadically and as part of a phakomatosis, most commonly tuberous sclerosis. They are considered one of a number of tumors with perivascular epitheloid cellular differentiation (PEComas) and are composed of vascular, smooth muscle and fat elements. They can spontaneously hemorrhage, which may be fatal. AMLs usually have characteristic radiographic appearances.

The remaining 20% are seen in association with phakomatoses, the vast majority in the setting of tuberous sclerosis (80% of them get AML) although they have also been described in the setting of von Hippel-Lindau syndrome (vHL) and neurofibromatosis type 1 (NF1) . In these cases, they present earlier (usually identified by the age of 10 years), are larger, and are far more numerous. They are more likely to be fat-poor which accounts for their earlier presentation . They have also been associated with lymphangioleiomyomatosis (LAM) .

Angiomyolipomas are often found incidentally when the kidneys are imaged for other reasons, or as part of screening in patients with tuberous sclerosis.

Symptomatic presentation is most frequently with spontaneous retroperitoneal hemorrhage; the risk of bleeding is proportional to the size of the lesion (>4 cm diameter). Shock due to severe hemorrhage from rupture is described as Wunderlich syndrome .

Almost all classic angiomyolipomas are benign but they do have the risk of rupture with bleeding or secondary damage/destruction of surrounding structures as they grow.

Two histological types have been described

A special variant called an epithelioid angiomyolipoma is composed of more plump, epithelial-looking cells, often with nuclear atypia, that have a described risk of malignant behavior. This variant, unlike conventional AMLs, may mimic renal cell carcinoma . Metastases have also been described .

The cornerstone of diagnosis on all modalities is the demonstration of macroscopic fat, however in the setting of hemorrhage, or when lesions happen to contain little fat, it may be difficult to distinguish an angiomyolipoma from a renal cell carcinoma.

In tuberous sclerosis the lesions are larger than isolated AML and often multiple and bilateral.

Most lesions involve the cortex and demonstrate macroscopic fat (less than -20 HU). When small, volume averaging may make differentiation from a small cyst difficult. It is essential to remember that rarely renal cell carcinomas (RCC) may have macroscopic fat components and as such the presence of fat is strongly indicative of an angiomyolipoma, but not pathognomonic.

It is important to realize that ~5% of angiomyolipomas are fat-poor . This is especially the case in the setting of tuberous sclerosis, where up to a third do not demonstrate macroscopic fat on CT . Absence of ossification/calcification on imaging is in favor of AML .

The second method is to use in-phase and out-of-phase imaging, which generates India ink artifact at the interface between fat and non-fat components. This can occur either at the interface between the angiomyolipoma and surrounding kidney or between fat and non-fat components of the mass . Chemical shift signal intensity loss, along with other features, may suggest a fat-poor AML .

Angiomyolipomas found incidentally usually require no therapy (when small), although follow-up is recommended to assess for growth. Small solitary AMLs (<20 mm) probably do not require follow-up due to their slow growth .

Larger AMLs, or those that have been symptomatic, can be electively embolized and/or resected with a partial nephrectomy.

The traditional convention is that intervention is considered when an angiomyolipoma reaches 40 mm in size .

mTOR inhibitors (e.g. everolimus) have been shown to significantly decrease AML size and may help to preserve renal function in tuberous sclerosis patients.

When an AML has typical appearances there is essentially no differential. If atypical, especially when fat-poor, other lesions to consider include: