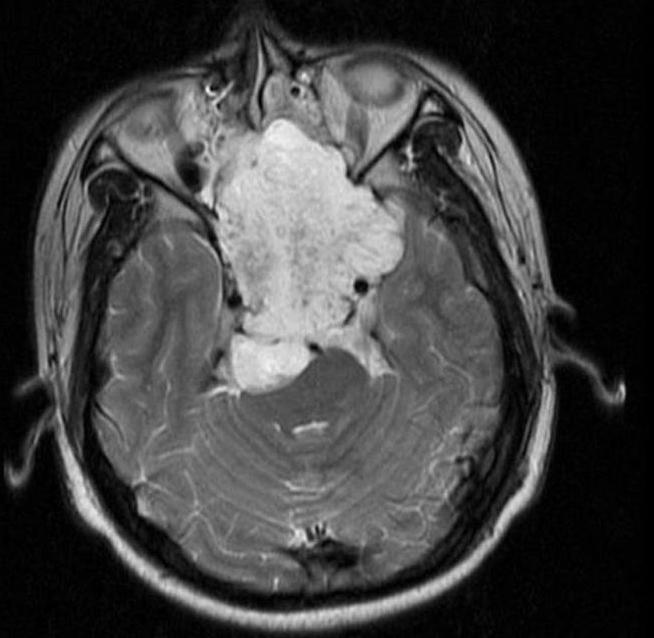 This is an
MRI Image of Sacral Bone Chordoma in a man 35 years old. It penetrates sacral bone from back to the front. Other information No
Wikipedia • CC BY-SA 3.0
Hallo!
Radiopaedia • CC-by-nc-sa 3.0 • de

Chordomas are uncommon malignant tumors of the axial skeleton that account for 1% of intracranial tumors and 4% of all primary bone tumors.

They originate from embryonic remnants of the primitive notochord (earliest fetal axial skeleton, extending from the Rathke's pouch to the tip of the coccyx). Since chordomas arise in bone, they are usually extradural and result in local bone destruction. They are locally aggressive but uncommonly metastasize.

Chordomas can occur at any age but are usually seen in adults (30-70 years). Those located in the spheno-occipital region most commonly occur in patients 20-40 years of age, whereas sacrococcygeal chordomas are typically seen in a slightly older age group (peak around 50 years ). They are commonly found in Caucasians .

They are slow growing tumors and usually present due to mass effect on adjacent structures (brainstem, cranial nerves, nasopharynx, spinal cord), or as a palpable mass (e.g. sacrococcygeal chordoma) .

Macroscopically, chordomas present as firm masses. Fluid and gelatinous mucoid substance (associated with recent and old hemorrhage) and necrotic areas are found within these tumors. In some patients, calcification and sequestered bone fragments are found as well. The variety of these components may explain the signal heterogeneity observed on MRI.

Microscopically, chordomas are characterized by physaliphorous cells. These tumors are often poorly marginated and microscopic distal extension of tumor cells likely explains the frequency of recurrences.

True malignant forms of chordomas occasionally have areas of typical chordoma as well as undifferentiated areas, most often fibrosarcoma. The prognosis in such cases is poor.

Chordomas are found along the axial skeleton and a relatively evenly distributed among three locations:

Sacrococcygeal is the most common location, accounting for approximately 30-50% of all chordomas and commonly involving the fourth and fifth sacral segments . In this location, a male predilection has been reported (M:F ratio of 2:1), and the tumor may be particularly large at presentation .

Chordoma is the most common primary malignant sacral tumor .

The clival region is the second most common location, accounting for 30-35% of cases . Typically the mass projects posteriorly at midline, indenting the pons; this characteristic appearance has been termed the so-called thumb sign. In contrast to sacrococcygeal tumors, there is no recognized gender difference.

Chordomas of the vertebral bodies are rare, but nonetheless, after lymphoproliferative tumors, are the second most common primary malignancy of the spine in adults .

They most commonly involve cervical (particularly C2), followed by lumbar, and then the thoracic spine. They often extend across the intervertebral disc space, involving more than one vertebral segment. They may extend into the epidural space compressing the spinal cord, or along the nerve roots enlarging the neural foramen.

MRI and CT scan have complementary roles in tumor evaluation. CT evaluation is needed to assess the degree of bone involvement and to detect patterns of calcification within the lesion. MRI provides excellent anatomical delineation of adjacent structures and is able to characterize the signal of the lesion usually allowing for a confident preoperative diagnosis. MRI is, however, limited in its ability to evaluate calcification and the precise involvement of skull base osteolysis less well than CT, especially for skull base foramina.

Although angiography is useful to assess vascular encasement and displacement, chordomas usually do not have significant tumoral vascularity .

Traditionally, surgical resection has been the first line of treatment when feasible, with radiotherapy offered for recurrent cases. Some advocate the combination of radiation therapy and complete or subtotal surgical resection for select patients . Percutaneous radiofrequency ablation has been trialled as an adjunct therapy . Recurrence, including seeding along the operative tract, is common.

Metastatic spread of chordomas is observed in 7-14% of patients and includes nodal, pulmonary, bone, cerebral or abdominal visceral involvement, predominantly from massive tumors .

Prognosis is typically poor due to the locally aggressive nature of these tumors, with overall 10-year survival of approximately 40%.

For clival/spheno-occipital lesions differentials to consider include: