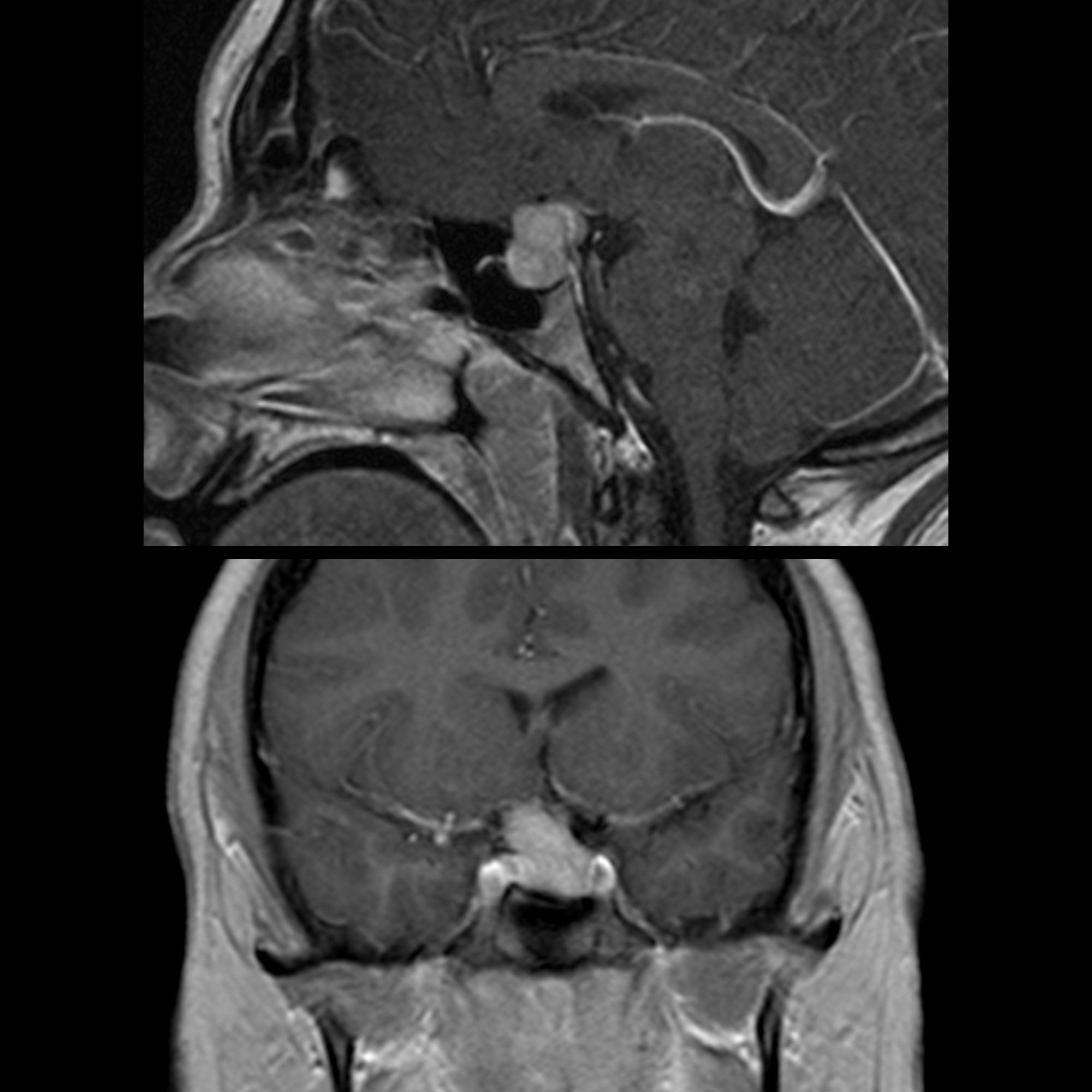 Teenager with
short stature. Sagittal (above) and coronal (below) T1 MRI with contrast of the sella shows a large homogenous solid mass arising in the sella and extending superiorly into the suprasellar region that shows homogenous enhancement with contrast.The diagnosis was pituitary macroadenoma.
pediatricimaging.org • CC-by-nc-sa 4.0

Pituitary macroadenomas are the most common suprasellar mass in adults, and responsible for the majority of transsphenoidal hypophysectomies. They are defined as pituitary adenomas greater than 10 mm in size and are approximately twice as common as pituitary microadenomas.

On imaging, they usually present as a solid tumor with attenuation similar to the brain (30-40 HU) and demonstrate moderate contrast enhancement. The same is observed on MRI, where they are isointense to the grey matter both on T1- and T2-weighted images. However, attenuation and signal characteristics can significantly vary depending on tumor components such as hemorrhage, cystic transformation, or necrosis.

For a general discussion, including epidemiology, treatment, and prognosis, please refer to the article on pituitary adenomas.

Patients typically present with symptoms of local mass effect on adjacent structures (especially optic chiasm). Some may present due to hormonal imbalance, with symptoms of hypopituitarism (from compression) or secretion. Hormonal imbalance due to overproduction tends to present earlier and tumors are thus usually small at presentation. This mode of presentation is discussed in the article on pituitary microadenomas.

A macroadenoma growing superiorly out of the pituitary fossa (or for that matter other pituitary region masses) will contact, elevate and compress the central part of the chiasm in most individuals. This central part carries fibers from the nasal retina, and thus results in the classical bitemporal hemianopia . Patients typically complain of bumping into things or having car accidents, but as the macular fibers are often spared, they may not be aware of their visual deficits.

In cases of prefixed or postfixed chiasms, or when the macroadenoma grows asymmetrically, then the optic nerves or optic tracts can be compressed, resulting in a variety of visual deficits.

Some macroadenomas demonstrate invasive growth, and extension into the cavernous sinuses is characteristic. Prolactin-secreting tumors are most frequently responsible for cavernous sinus extension, and typically prolactin levels increase significantly when the tumor gains access to the sinus . Once in the sinus, these tumors are difficult to resect completely.

They may compress cranial nerves resulting in deficits, although this is uncommon, seen in only 1-14% of cases . The oculomotor nerve (CN III) is most commonly involved, followed by the abducens nerve (CN VI) .

Likelihood of surgical/histological invasion can be estimated with the Knosp classification.

Most macroadenomas are non-secretory (endocrinologically inactive). They are a type of benign epithelial tumor composed of adenohypophyseal cells

Pituitary macroadenomas are by definition >10 mm diameter masses arising from the pituitary gland, and usually extending superiorly into the suprasellar cistern where it can compress the chiasm. Bilateral indentation by the diaphragma sellae as the tumor passes superiorly can give a snowman or figure-eight configuration .

Because these tumors are typically slow-growing, the pituitary fossa is almost invariably enlarged with thinned remodeled bone.

Non-contrast attenuation can vary depending on hemorrhagic, cystic, and necrotic components. Solid adenomas without hemorrhage, typically have attenuation similar to the brain (30-40 HU) and demonstrate moderate contrast enhancement; less marked than one typically sees in meningiomas. Calcification is rare.

MRI is the preferred imaging modality. It is able to delineate the mass exquisitely as well as clearly visualize the optic chiasm, anterior cerebral vessels, and cavernous sinuses.

Overall signal characteristics can significantly vary depending on tumor components such as hemorrhage, cystic transformation, or necrosis.

Attempting to predict invasion based on imaging is important preoperatively. Generally, the more laterally a tumor extends into the cavernous sinus, and the more it encircles the internal carotid artery, the greater the likelihood of invasion.

Alternatively, an MRI grading system described by Knosp et al based on tumor extension past tangents drawn along the medial, central, and lateral aspects of the supra- and intracavernous internal carotid arteries is easy to use and is predictive of surgical and histological invasion (see Knosp classification system) .

The normal pituitary gland should not demonstrate significant FDG uptake and are normally not seen on PET-CT . Pituitary macroadenomas are highly hypermetabolic both with FDG and choline tracers.

The differential of a pituitary macroadenoma is essentially the list of conditions leading to a pituitary region mass. The most common considerations include: