Pituitary
apoplexy: an update on clinical and imaging features. CT appearance of pituitary apoplexy. Arrows on axial (a), coronal (b) and sagittal (c) reconstructions indicate an intrasellar lesion, dis-homogeneously hyperdense, due to the presence of haemorrhagic components. The utility of reformatted images in the evaluation of the intrasellar hyperdensity is evident
insightsimaging.springeropen.com • Open Access 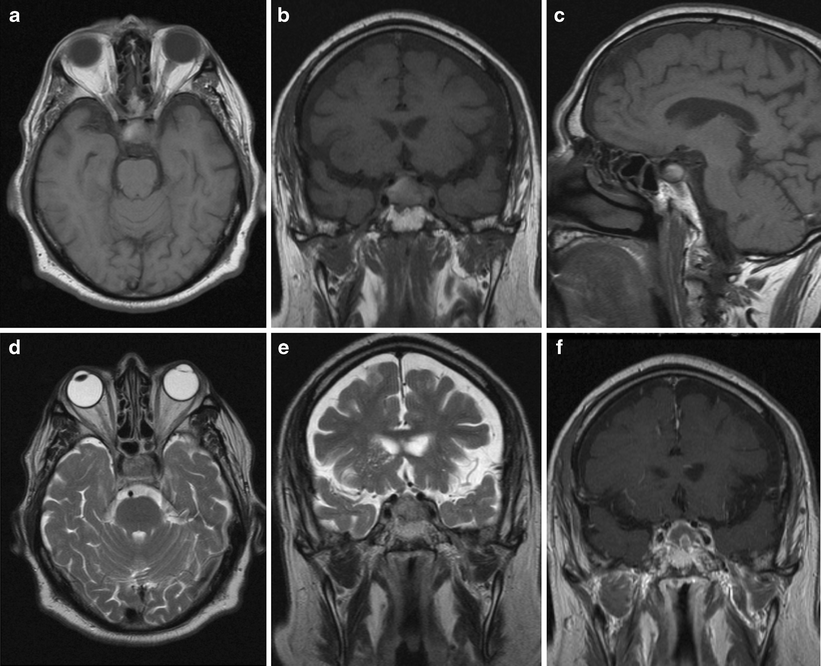 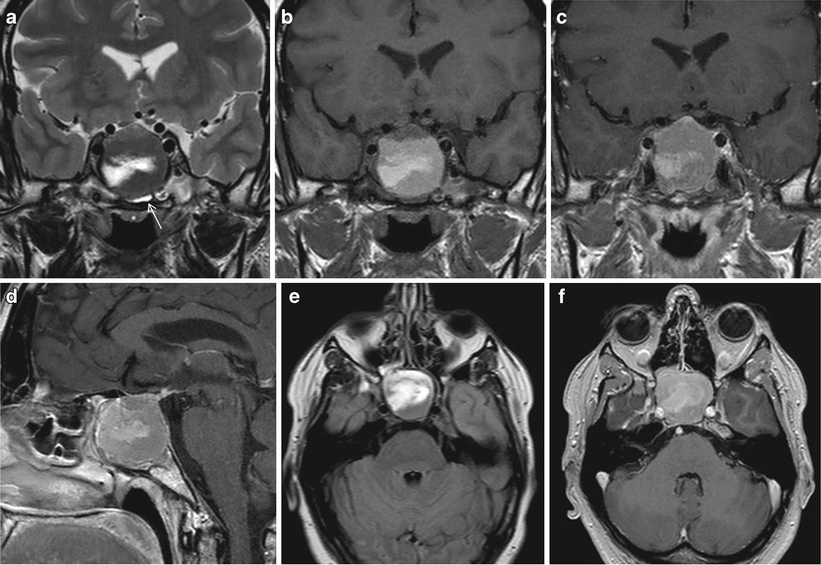 Pituitary
apoplexy: an update on clinical and imaging features. Large pituitary macroadenoma with MRI signs of subacute haemorrhage. In this phase, haemorrhage appears hyperintense on both T1WI (b) and T2WI (a). In the T2WI (a, e), thickening of the sphenoid mucosa (arrow) is evident as well. This sign is highly specific for pituitary apoplexy. On contrast-enhanced MRI (c, d, f) the residual pituitary gland enhances (arrow in c compared to b). Note the optic pathway compression, more evident on T2WI
insightsimaging.springeropen.com • Open Access

Pituitary
apoplexy: an update on clinical and imaging features. The figure shows an oval-shaped, haemorrhagic lesion within a pituitary adenoma, homogeneously hyperintense on both T1- and T2-weighted images (WI) (a), with a hypointense rim on T2WI (b, white arrow). Contrast-enhanced T1WI (c) shows strong, homogeneous enhancement of the pituitary gland and stalk, both displaced by the tumour
insightsimaging.springeropen.com • Open Access 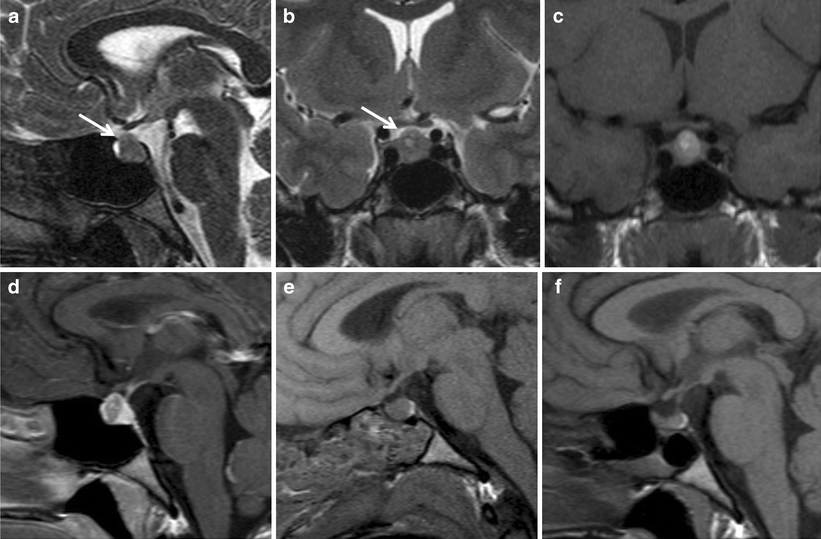 Pituitary
apoplexy: an update on clinical and imaging features. Pituitary apoplexy in a patient with pre-existing adenoma. Arrows on sagittal and coronal T2WI (a, b) as well as in coronal T1WI show an area of haemorrhage within the adenoma. Haemorrhagic components appear hyperintense on both T2WI and T1WI. In (d) sagittal contrast-enhanced T1WI showing peripheral enhancement. Despite the absence of chiasm compression and cavernous sinus involvement, this patient underwent surgical treatment with a transsphenoidal approach. Sagittal T1WI follow-up during surgery on intraoperative MRI (Brain Suite) (e) and late follow-up (3 months later, f) show good imaging results
insightsimaging.springeropen.com • Open Access 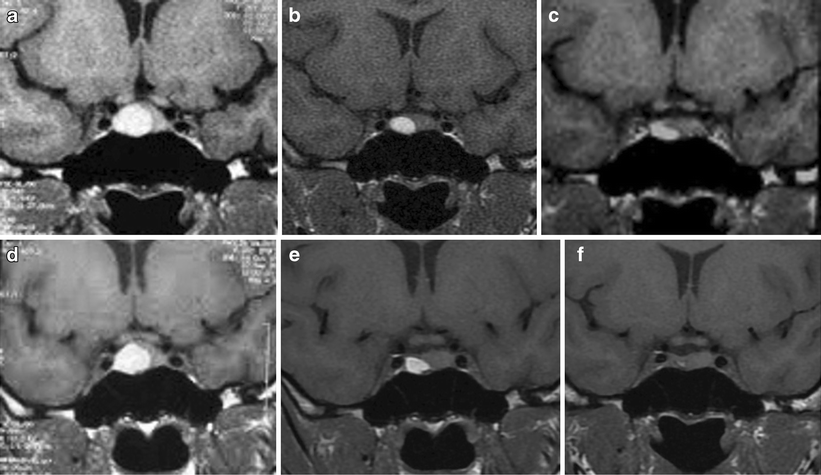 Pituitary
apoplexy: an update on clinical and imaging features. Series of coronal T1WI follow-up images in a patient with a history of pituitary apoplexy. The patient presented to us for observation in July 2008 with sudden headache (a). He underwent conservative treatment. Further MRI studies demonstrated progressive reduction of the haemorrhagic component over time (b, c). Because of a new sudden episode of headache, he underwent a new follow-up (d) that showed a new increase in the size of the T1WI hyperintensity, suggesting re-bleeding. Further follow-up showed a reduction of haemorrhage during the next 2 years
insightsimaging.springeropen.com • Open Access 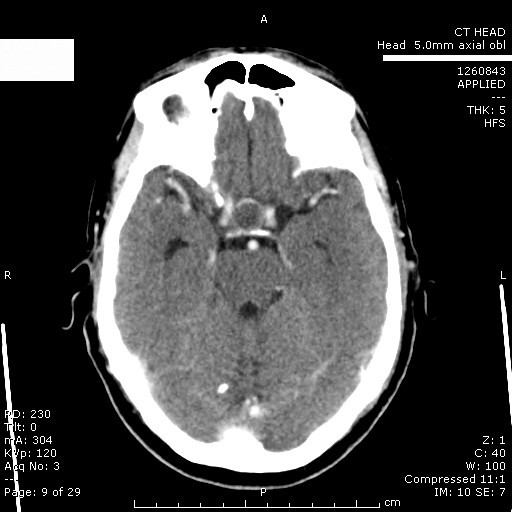 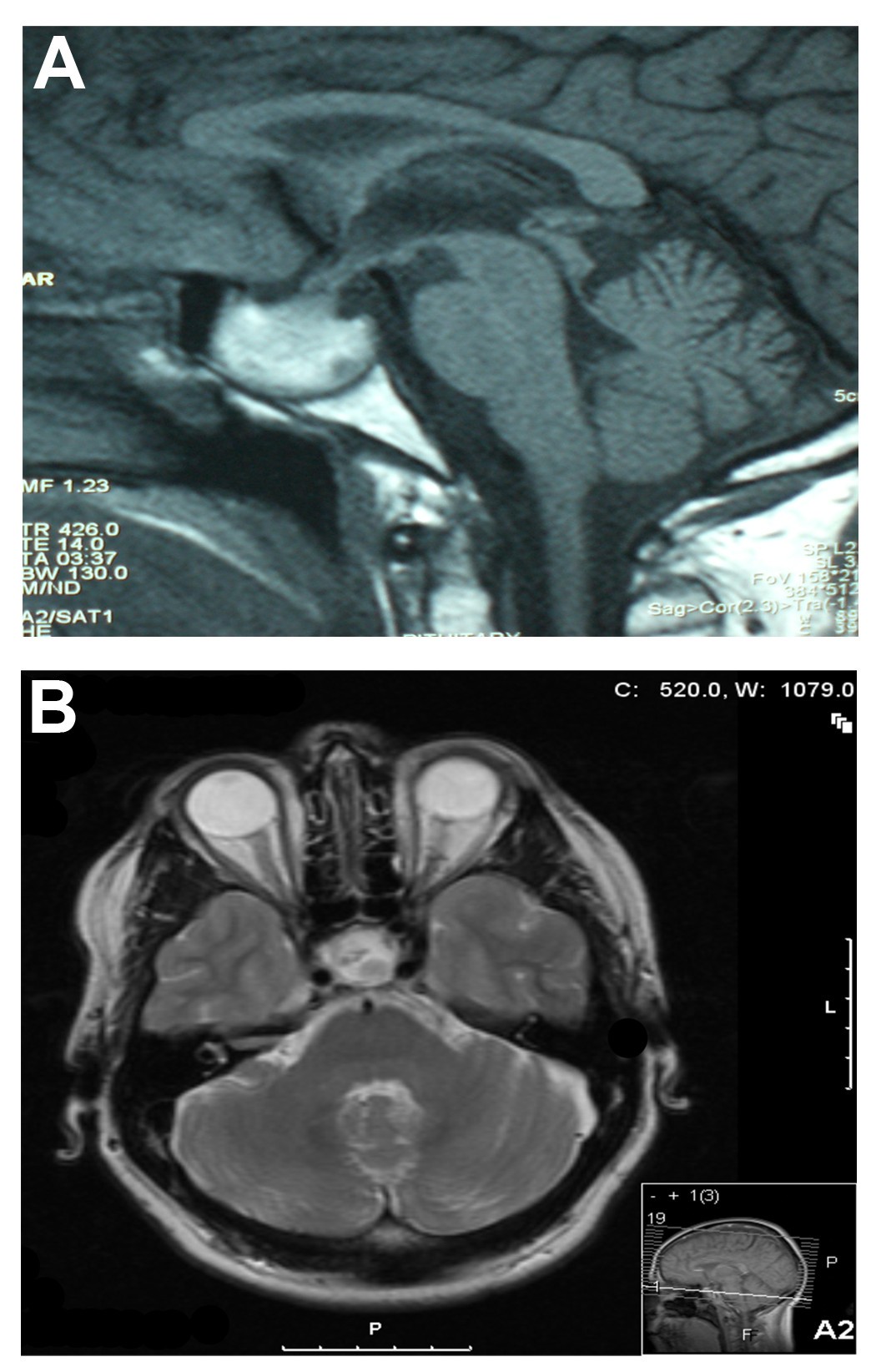 Pituitary
apoplexy can mimic acute meningoencephalitis or subarachnoid haemorrhage. MR imaging of pituitary apoplexy. a A sagittal T1 image of the pituitary gland. The enlarged sella containing an abnormal soft tissue with increased signal intensity is suggestive of haemorrhage. b A transverse T1 image of the pituitary gland 2 months following presentation. The sella is expanded and contains abnormal soft tissue that is of low T1 signal. A small area of high T1 signal in the superior aspect of this is taken to represent normal posterior pituitary signal. There are no features of haemorrhage on this later scan.
intjem.biomedcentral.com • CC-by-nc-2.0
Hallo!
Radiopaedia • CC-by-nc-sa 3.0 • de

Pituitary apoplexy is an acute clinical syndrome caused by either hemorrhagic or non-hemorrhagic necrosis of the pituitary gland. Although variable, it typically comprises headache, visual deficits, ophthalmoplegia, and altered mental status. An existing pituitary macroadenoma is usually present (60-90%), but it has occurred with healthy glands in a few isolated cases.

The demographics generally follow that of pituitary macroadenomas. Additional predisposing factors include :

As the gland suddenly enlarges it may cause compression of structures adjacent to the sella, and thus elicit a number of signs and symptoms, including :

Also, the patient may experience a decreased level of consciousness, hypopituitarism, Addisonian crisis , and subarachnoid irritation, the latter being secondary to hemorrhage.

General features include enlargement of the pituitary gland, with or without bleeding. Macroscopic hemorrhage is common and occurs in about 85%. It shows peripheral enhancement around a non-enhancing infarcted center. Surrounding edema may be seen in the optic tracts and chiasm.

Routine CT is insensitive to the diagnosis unless frank intracranial hemorrhage is present. The pituitary mass may be evident and may be hyperdense. Fluid-debris levels may also be evident.

If prompt neurosurgical intervention with the transsphenoidal approach is available to decompress the gland, prognosis is good. Without surgery, the majority of the patients die. Conservative management may be chosen in selected cases. Pituitary apoplexy is usually associated with irreversible hypopituitarism and often ophthalmoplegia and visual loss .