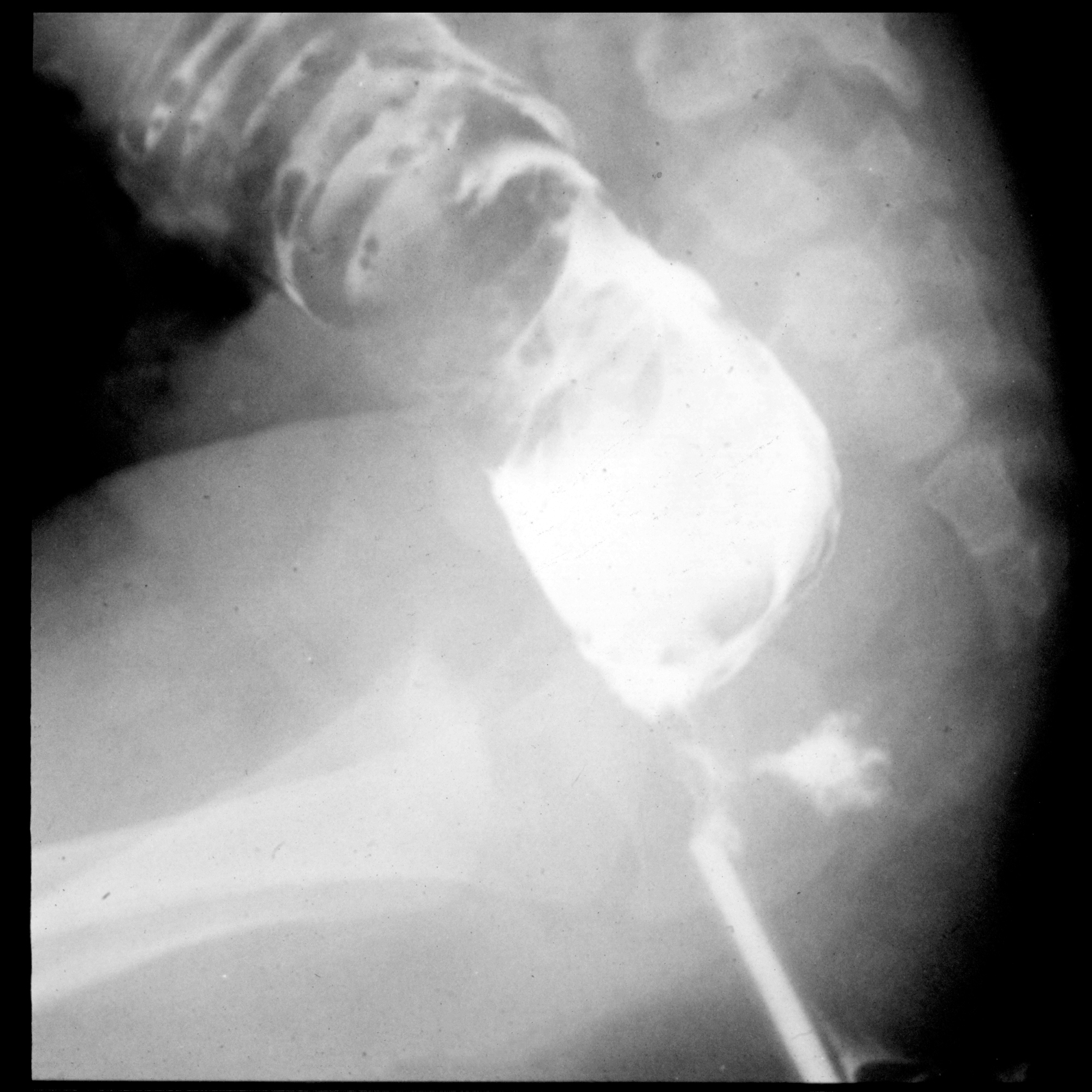 Infant with
urinary retention and constipation. Lateral image from a barium enema shows displacement of the rectum anteriorly by a presacral mass which is eroding into the rectum and causing the extravasation of a small amount of contrast from the rectum posteriorly.The diagnosis was sacrococcygeal teratoma.
pediatricimaging.org • CC-by-nc-sa 4.0
Hallo!
Radiopaedia • CC-by-nc-sa 3.0 • de

It is the commonest congenital tumor in fetus and neonate . The incidence is estimated at ~1:35000-40000. There is recognized female predilection with a M:F ratio of 1:4. The sacrococcygeal region is the commonest location for non-CNS teratomas.

Presentation varies depending on if a tumor has an intrapelvic location or has an extra-fetal extension (see further classification below). Intrapelvic tumors can manifest after birth with genitourinary and gastrointestinal symptoms given the compression of those structures.

They are thought to arise from totipotent cells from the node of Hensen at the anterior aspect of the coccyx by about the 2 to 3 weeks of gestation. They are most often mixed solid/cystic, although purely cystic types can occur in ~15% of cases.

A tumor is composed of all three germ cells (i.e. ectoderm, mesoderm and endoderm).

Can have elevated levels of:

A pathology-based classification is as:

A location-based classification system according to the American Academy of Pediatric Surgery Section Survey is:

Not part of a routine investigation. Identifies bone, fat and cystic components. Calcification may again be seen.

Mature types tend to be more cystic which show as anechoic components. Solid types (which are much rarer) often show an echogenic mass within the pelvis.

The correlation between sonographic appearances and malignant components are thought to be poor .

Superior to ultrasound especially in the assessment of the following areas :

Signal characteristics can significantly vary depending on the constituent of the teratoma .

An SCT can be benign or malignant depending on whether mature or immature. The majority, however, tend to be benign (~80% ). Those presenting in older infants tend to have a higher malignant potential which those presenting in utero have a poor prognosis due to complications. Malignant change may be also commoner in males. Treatment is with surgical excision inclusive of coccygectomy with additional chemotherapy for malignant tumors .