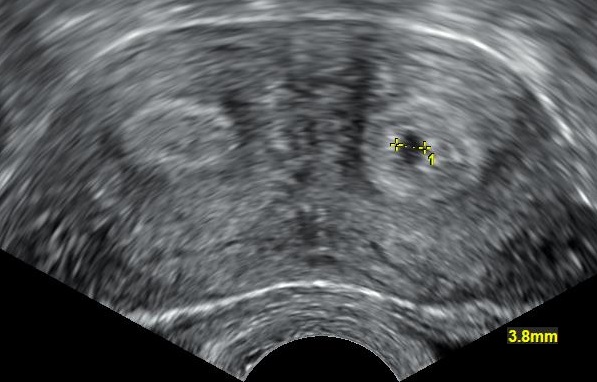 Transvaginal
ultrasound showing a cross-section of a bicornuate uterus, with two cavities or "horns" visible at left and right, respectively. In the "horn" to the right, a gestational sac is visible, with a diameter of 5.7mm, corresponding to a gestational age of between 4 and 5 weeks. This projection did not not transect the maximal diameter, thus giving a bit smaller diameter in the image. The patient sought medical care because of a positive pregnancy test despite having a intrauterine device (IUD) with copper, presumably because the IUD was located in the other "horn".
Wikipedia • CC0
Hallo!
Radiopaedia • CC-by-nc-sa 3.0 • de

A bicornuate uterus is a type of uterine duplication anomaly. It can be classified as a class IV Mullerian duct anomaly.

In most cases, a bicornuate uterus is incidentally discovered when the pelvis is imaged. The most common symptomatic presentation is with early pregnancy loss and cervical incompetence . Infertility is not usually a problem with this type of malformation because implantation of the embryo is not impaired.

A bicornuate uterus results from abnormal development of the paramesonephric ducts. There is a partial failure of fusion of the ducts, resulting in a uterus divided into two horns.

A bicornuate uterus is divided according to the involvement of the cervical canal:

The preferred methods of imaging uterine anomalies are ultrasound, hysterosalpingogram or MRI. The external uterine contour is concave or heart-shaped, and the uterine horns are widely divergent. The fundal cleft is typically more than 1 cm deep and the intercornual distance is widened.

The uterus is seen as comprising caudally fused symmetric uterine cavities with some degree of communication between the two cavities (usually at the uterine isthmus). Although not a specific finding, the angle between the horns of the bicornuate uterus is usually more than 105° .

A divided uterus can be seen, but it is difficult to differentiate between septate and bicornuate anomalies since the uterine fundal contour is not visible . Accuracy of hysterosalpingogram alone is only 55% in differentiation between both entities. An angle of less than 75° between the uterine horns is suggestive of a septate uterus while an angle of more than 105° is more consistent with a bicornuate uterus.

May help confirm anatomy by showing a deep (>1 cm) fundal cleft in the outer uterine contour and an intercornual distance of >4 cm. The uterus demonstrates normal uterine zonal anatomy.

Surgical intervention is usually not indicated in the absence of reproductive difficulties.

In women with a history of recurrent pregnancy loss and in whom no other infertility issues have been identified a Strassman metroplasty can be considered.