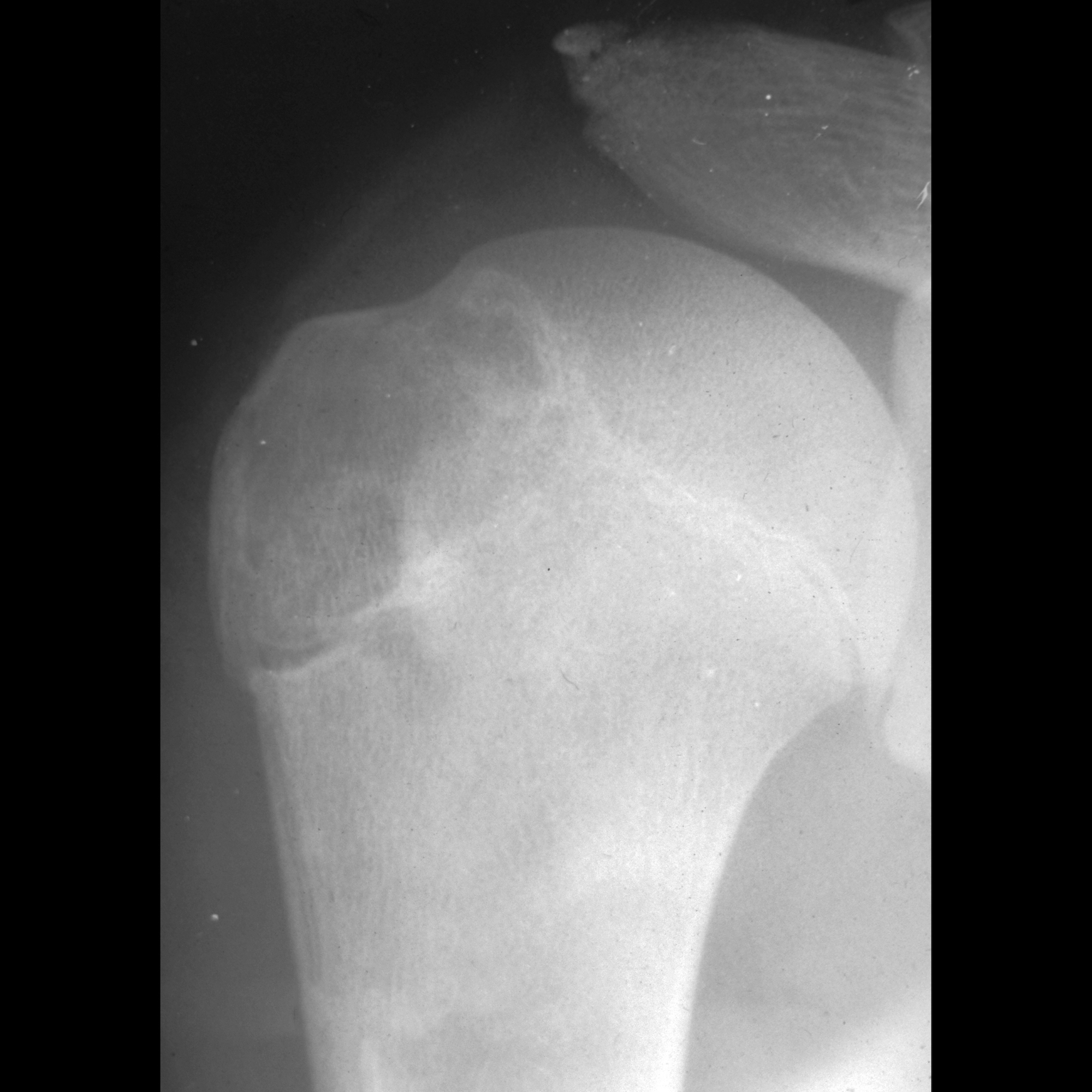 Teenager with
shoulder pain. AP radiograph of the right shoulder shows a lesion in the greater tuberosity of the humerus that is lytic in appearance with some internal calcification with a thin sclerotic rim and a narrow zone of transition and no periosteal reaction.The diagnosis was chondroblastoma.
pediatricimaging.org • CC-by-nc-sa 4.0
Hallo!
Radiopaedia • CC-by-nc-sa 3.0 • de

Chondroblastomas, also referred as Codman tumors, are rare benign cartilaginous neoplasms that characteristically arise in the epiphysis or apophysis of a long bone in young patients. Despite being rare, they are one of the most frequently encountered benign epiphyseal neoplasms in skeletally immature patients.

Chondroblastomas represent less than 1% of all primary bone tumors, occurring predominantly in young patients (<20 years of age) with an overall male predilection .

Clinical presentation is non-specific and may include joint pain, muscle wasting, tenderness, and swelling/local mass. Chondroblastoma produces prostaglandins, which induce pain; moreover, due to its epiphyseal location, it can trigger synovial reaction .

Malignant transformation has been seen in a small proportion of cases, with local and vascular invasion, and distant metastases.

Aneurysmal bone cysts can be seen secondarily to underlying chondroblastoma .

Microscopically they are composed of chondroblasts, chondroid matrix, cartilage with occasional giant multinucleated cells (which may lead to the incorrect diagnosis of giant cell tumor).

Chondroblastomas most frequently arise in the epiphyses of long bones, with 70% occurring in the humerus (most frequent), femur and tibia . Approximately 10% are found in the hands and feet .

Chondroblastomas are a prominent part of the differential diagnosis and mnemonics for radiolucent bone lesions and epiphyseal lesions .

Chondroblastomas are seen as well defined lucent lesions, with either smooth or lobulated margins and a thin sclerotic rim, arising eccentrically in the epiphysis of long tubular bones (e.g., femur, humerus, or tibia) or apophyses such as the greater trochanter of the femur, greater tuberosity of the humerus, acromion, calcaneus, or talus. As they enlarge, they tend to extend to the metaphysis. Cortical breach is rare.

A joint effusion is seen in one-third of patients.

Among epiphyseal lesions, the presence of solid or layered periosteal reaction distant to the lesion (involving the diaphysis) is distinctive for chondroblastoma .

CT demonstrates the plain film findings with better delineation of the relationship to the growth plate and articular surface. Solid periosteal reaction (seen in up to 50% of cases) and internal calcification (calcified matrix seen in ~50% of cases) and cortical breach are also more easily appreciated . Endosteal scalloping may be seen .

MRI is ideal for the evaluation of transphyseal or transcortical extension, and for demonstrating associated surrounding bone marrow and soft tissue edema, which is seen in a large proportion of cases .

These lesions have well-circumscribed, lobulated margins. Signal is variable :

Treatment typically consists of curettage and packing of the resulting cavity with either bone or bone cement (polymethylmethacrylate). Radiofrequency ablation has also been used .

Unfortunately due to their proximity to the articular surface and growth plate complete eradication is difficult. As a result recurrence rates are relatively high (8-20%), and injury to the growth plate may result in growth arrest and limb-length discrepancy .

Treatment may be also complicated by growth plate injury, which can lead to growth arrest and limb length discrepancy.

In 1931, this lesion was described by Ernest Armory Codman (1869-1940), American physician, as an epiphyseal chondromatous giant cell tumor of the proximal humerus, hence the term Codman tumor .

The differential is that of other lesions which have a predilection for the epiphysis or apophysis (see differential for an epiphyseal lesion). Specific lesions to be considered include :

Presence of bone marrow edema frequently seen surrounding chondroblastomas is helpful, as it is not a usual feature of chondromyxoid fibromas, giant cell tumors or enchondromas .