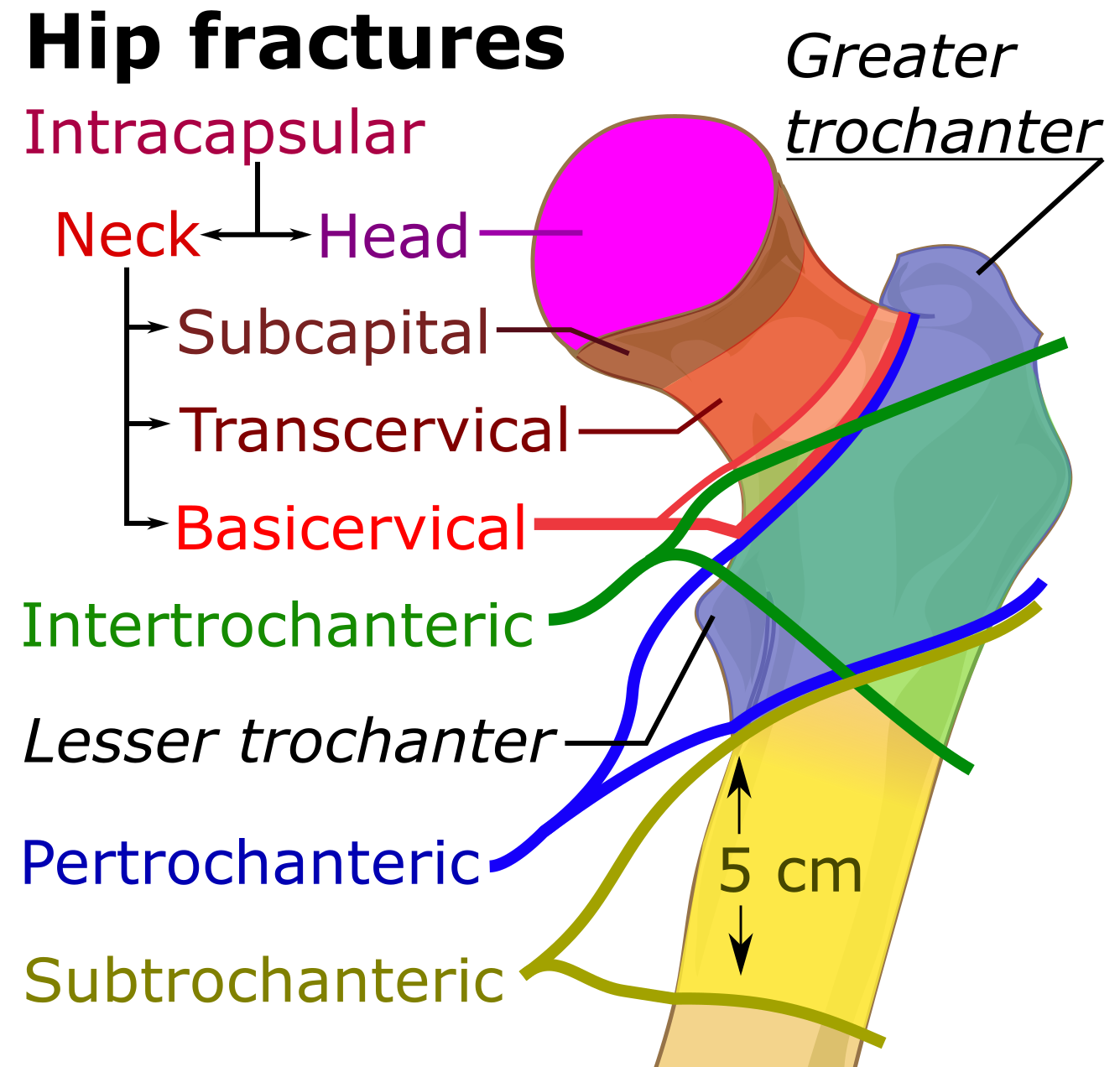 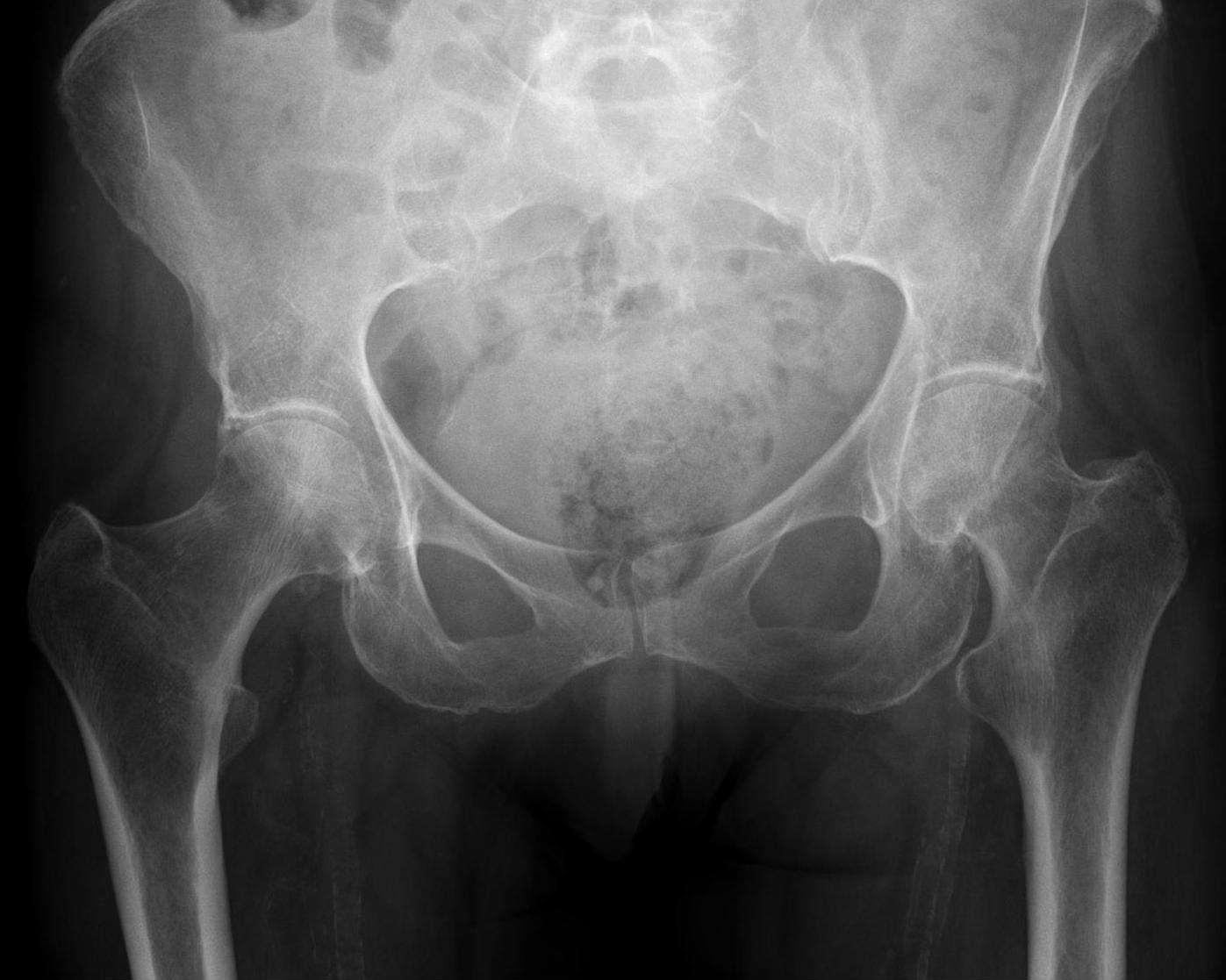 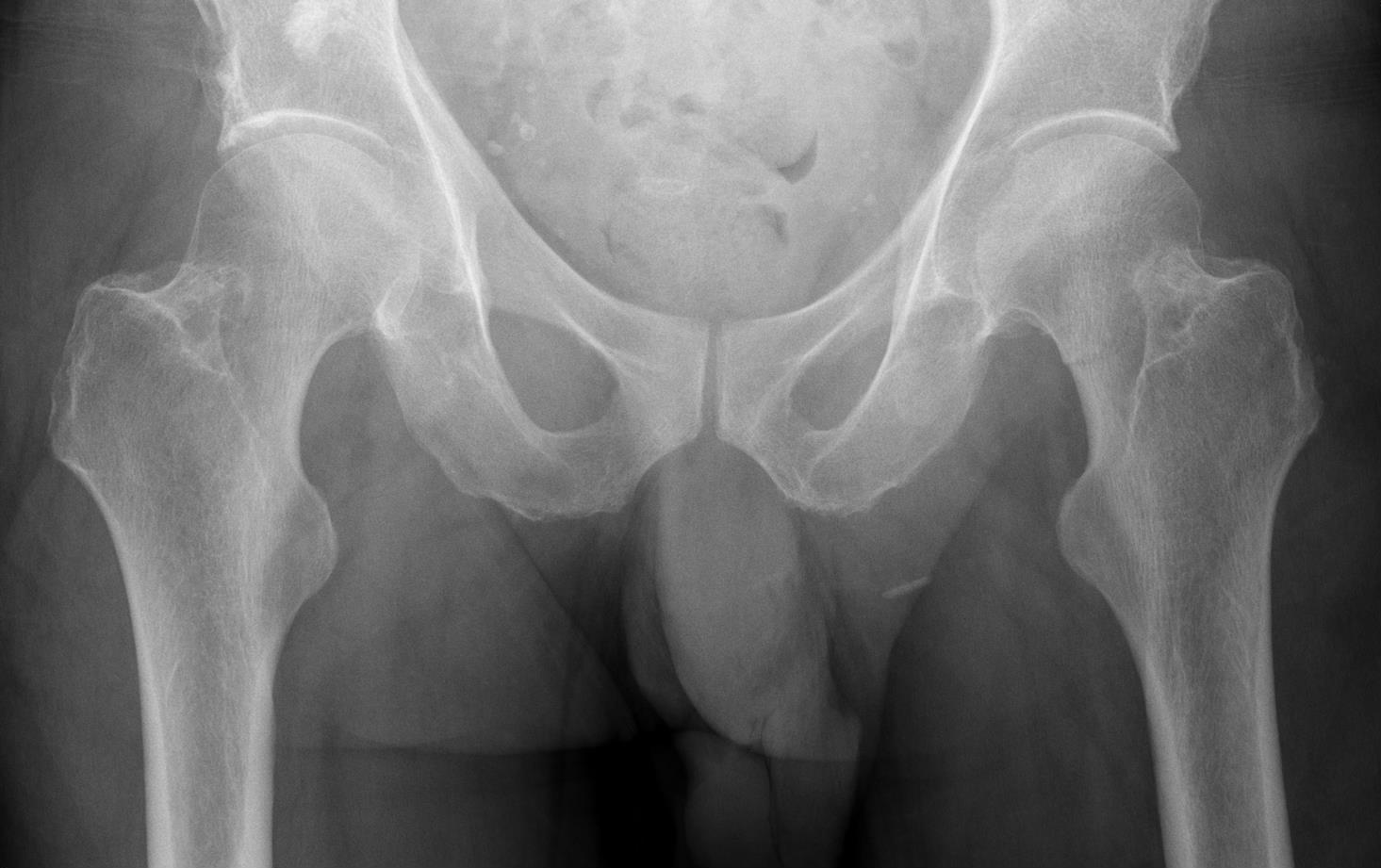 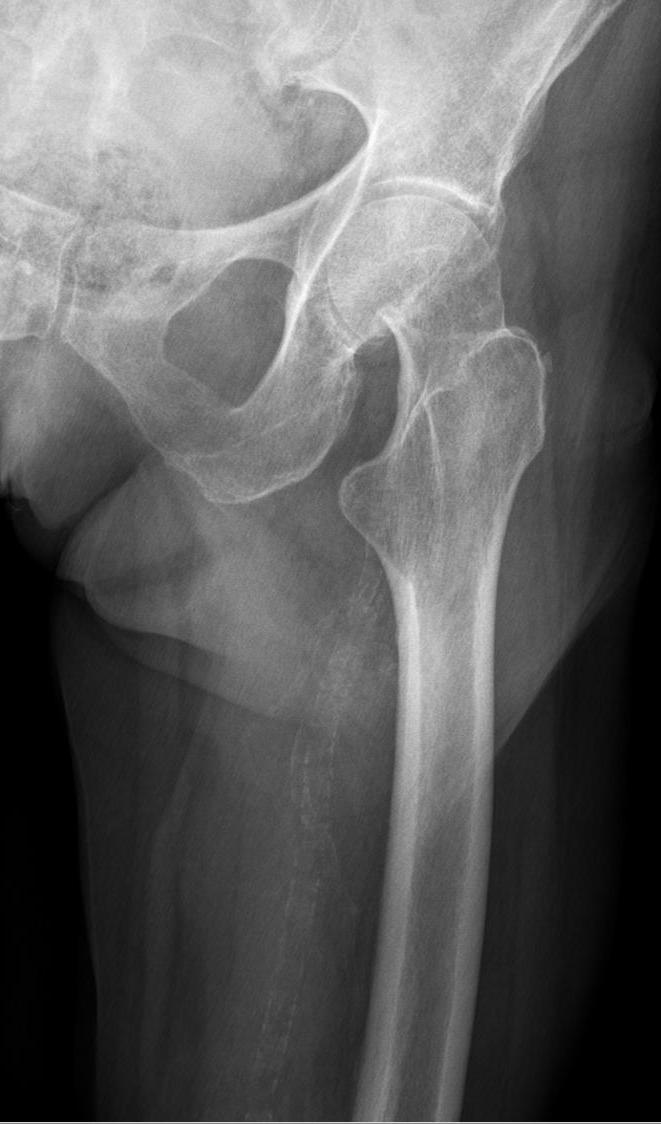 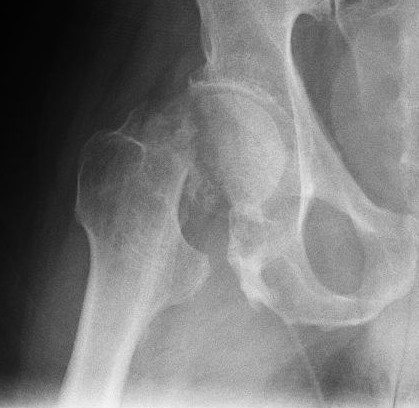 Hip-Joint,
fracture of the collum femoris. Lefthand from the head is the rather large dislocation and fracture-zone to be seen.
Wikipedia • CC-BY-SA-3.0 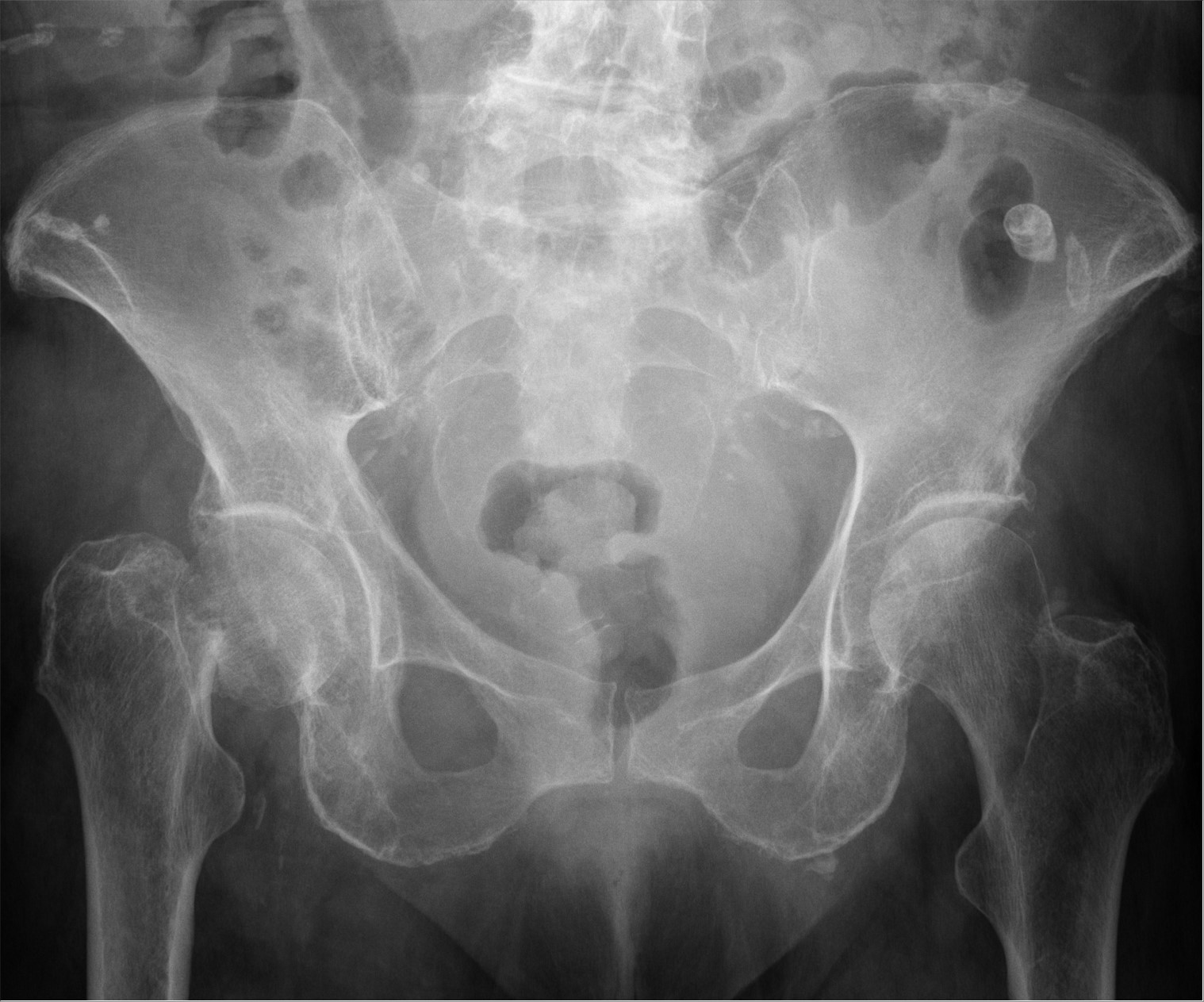 Neck of femur fractures (NOF) are common injuries sustained by older patients who are both more likely to have unsteadiness of gait and reduced bone mineral density, predisposing to fracture. Elderly osteoporotic women are at greatest risk.

Incidence is increasing as the proportion of the elderly population in many countries increases . In patients aged between 65 and 99, femoral neck and intertrochanteric fractures occur with approximately the same frequency .

Femoral neck fractures are a subset of proximal femoral fractures. The femoral neck is the weakest part of the femur.

Since disruption of blood supply to the femoral head is dependent on the type of fracture and causes significant morbidity, the diagnosis and classification of these fractures is important. There are three types:

Further, severity of a subcapital fracture is graded by the Garden classification of hip fractures.

In elderly patients, the mechanism of injury various from falls directly onto the hip to a twisting mechanism in which the patient’s foot is planted and the body rotates. There is generally deficient elastic resistance in the fractured bone .

The mechanism in young patients is predominantly axial loading during high force trauma , with an abducted hip during injury causing a neck of femur fracture and an adducted hip causing a hip fracture-dislocation.

Plain radiographs (sensitivity 93-98%) is the first-line investigation for suspected NOF fractures. In patients with a suspected occult NOF fracture, MRI (sensitivity 99-100%) is recommended by many institutions as the second-line test if available within 24 hours, with CT or nuclear medicine bone scan third-line . However, a recent study reports that thin-slice MDCT is as sensitive as MRI .

Treatment of neck of femur fractures is important. Significant complications such as avascular necrosis and non-union are very common without surgical intervention. The treatment options include non-operative management, internal fixation or prosthetic replacement.

Internal fixation can be performed with multiple pins, intramedullary hip screw (IHMS), crossed screw-nails or compression with a dynamic screw and plate . Replacing the femoral head is achieved with either hemiarthroplasty and total hip arthroplasty.

The high morbidity and mortality associated with hip and pelvic fractures after trauma has been well documented. Prognosis is varied but is complicated by advanced age, as hip fractures increase the risk of death and major morbidity in the elderly .

The risk of avascular necrosis (AVN) depends on the type of fracture. The Delbet classification correlates with the risk of AVN :

As a general rule, internal fixation is recommended for young, otherwise, fit patients with small risk for AVN. While prosthetic replacement is reserved for fractures with a high risk of AVN and the elderly .