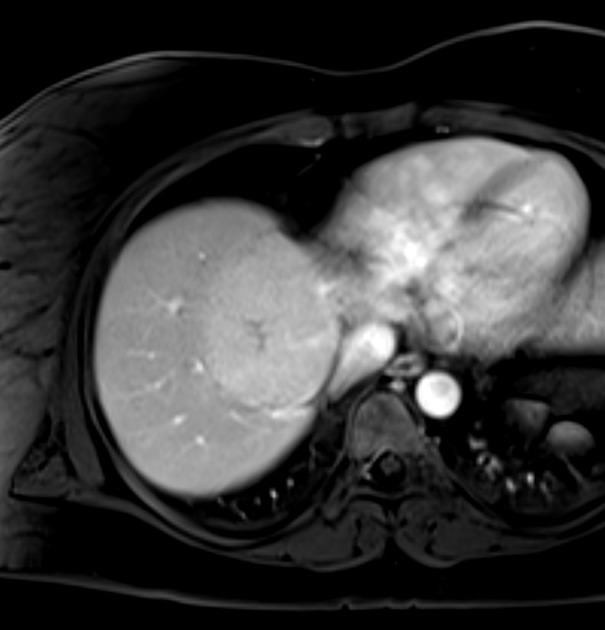 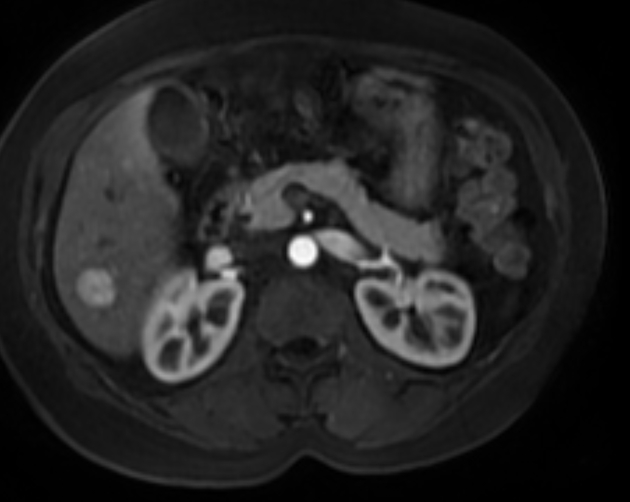 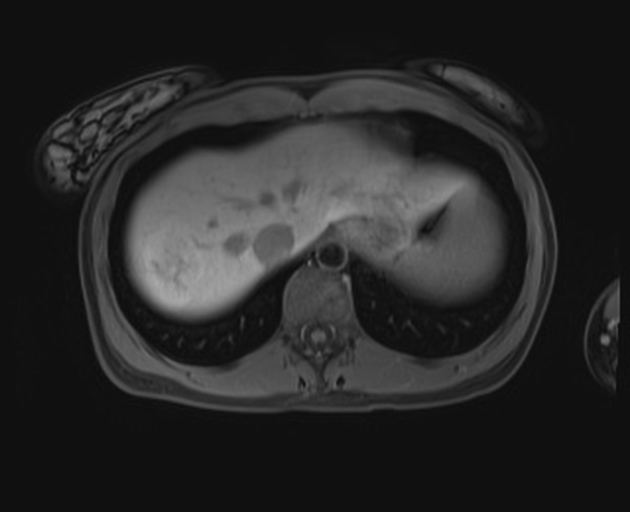 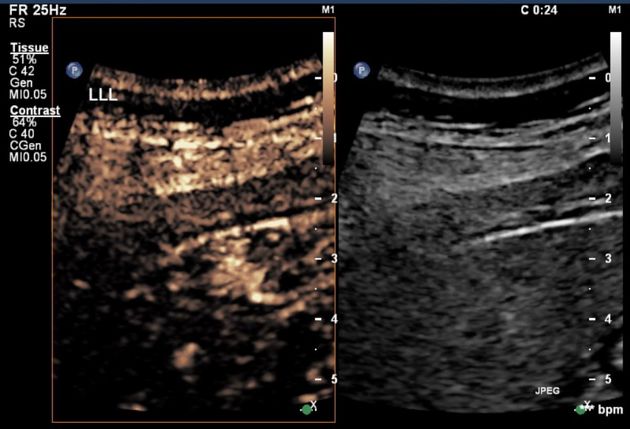 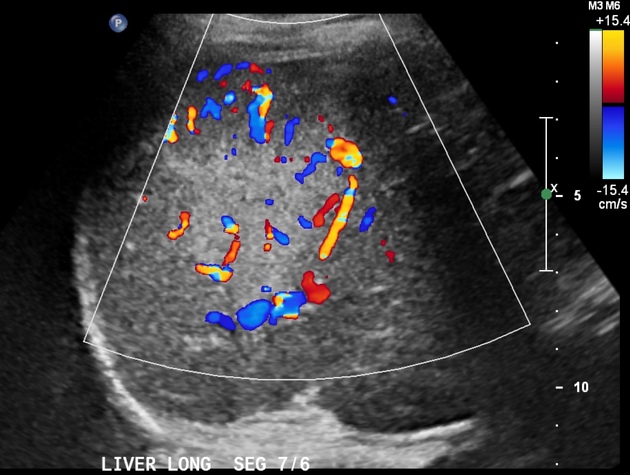 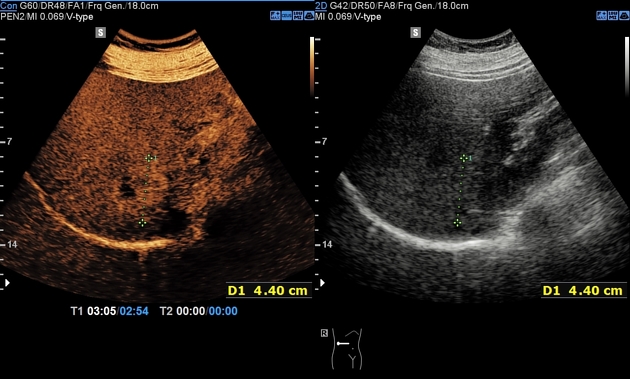 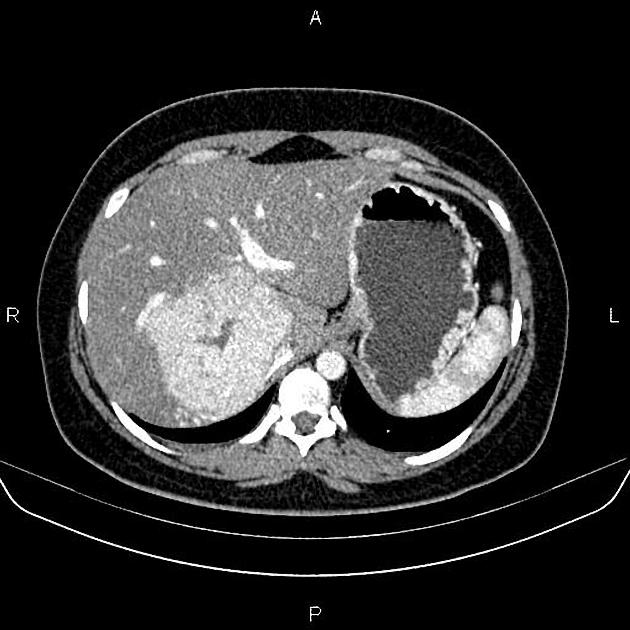 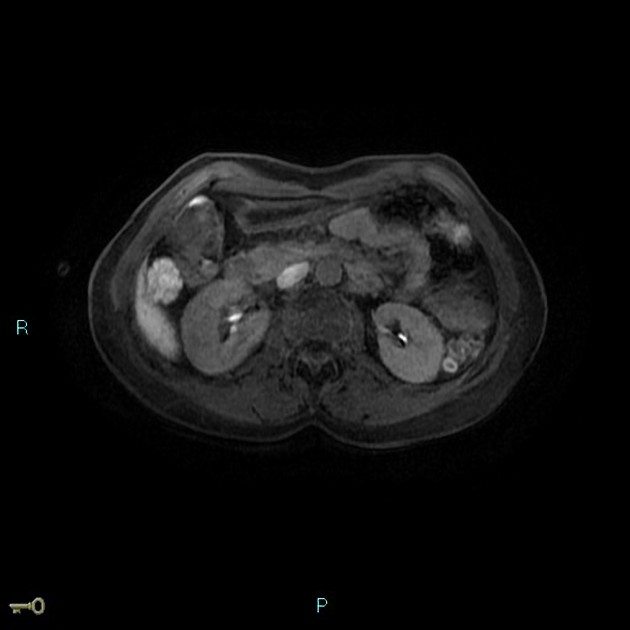 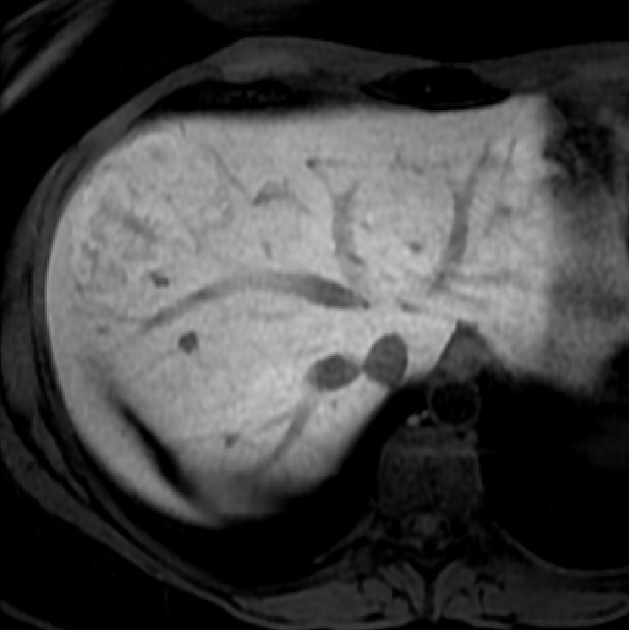 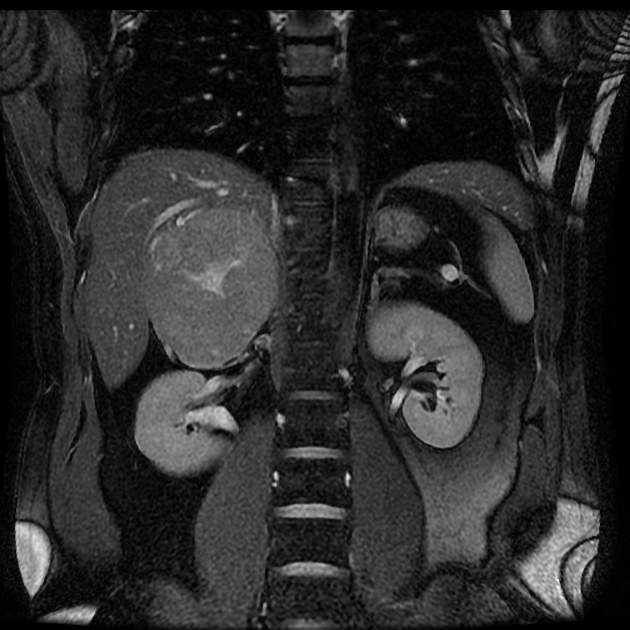 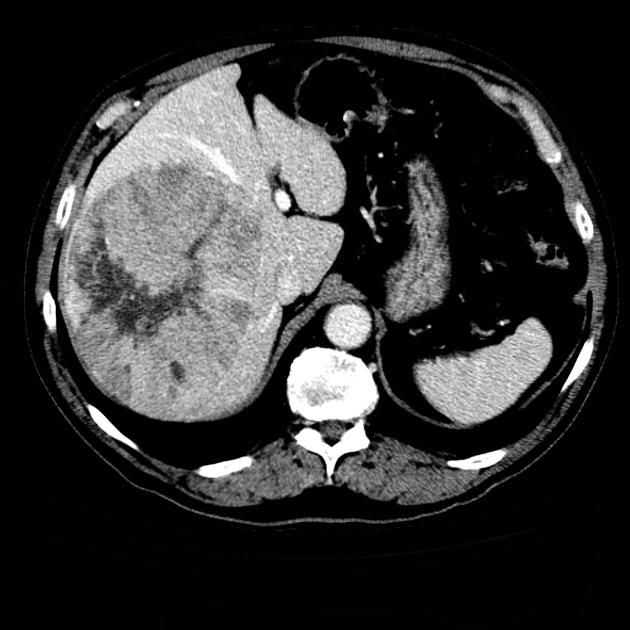 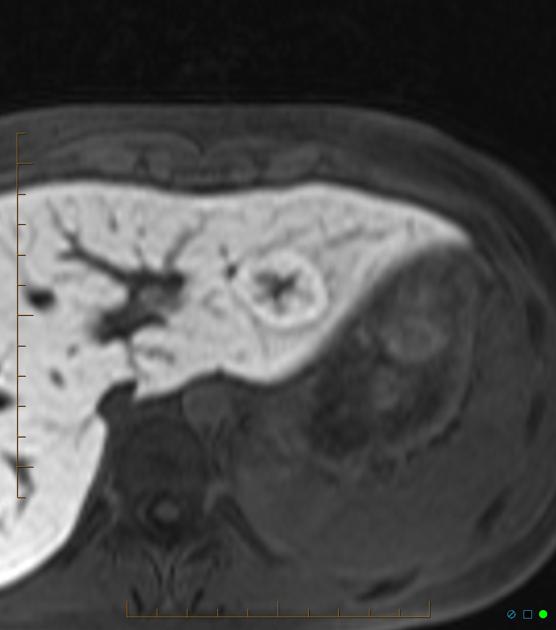 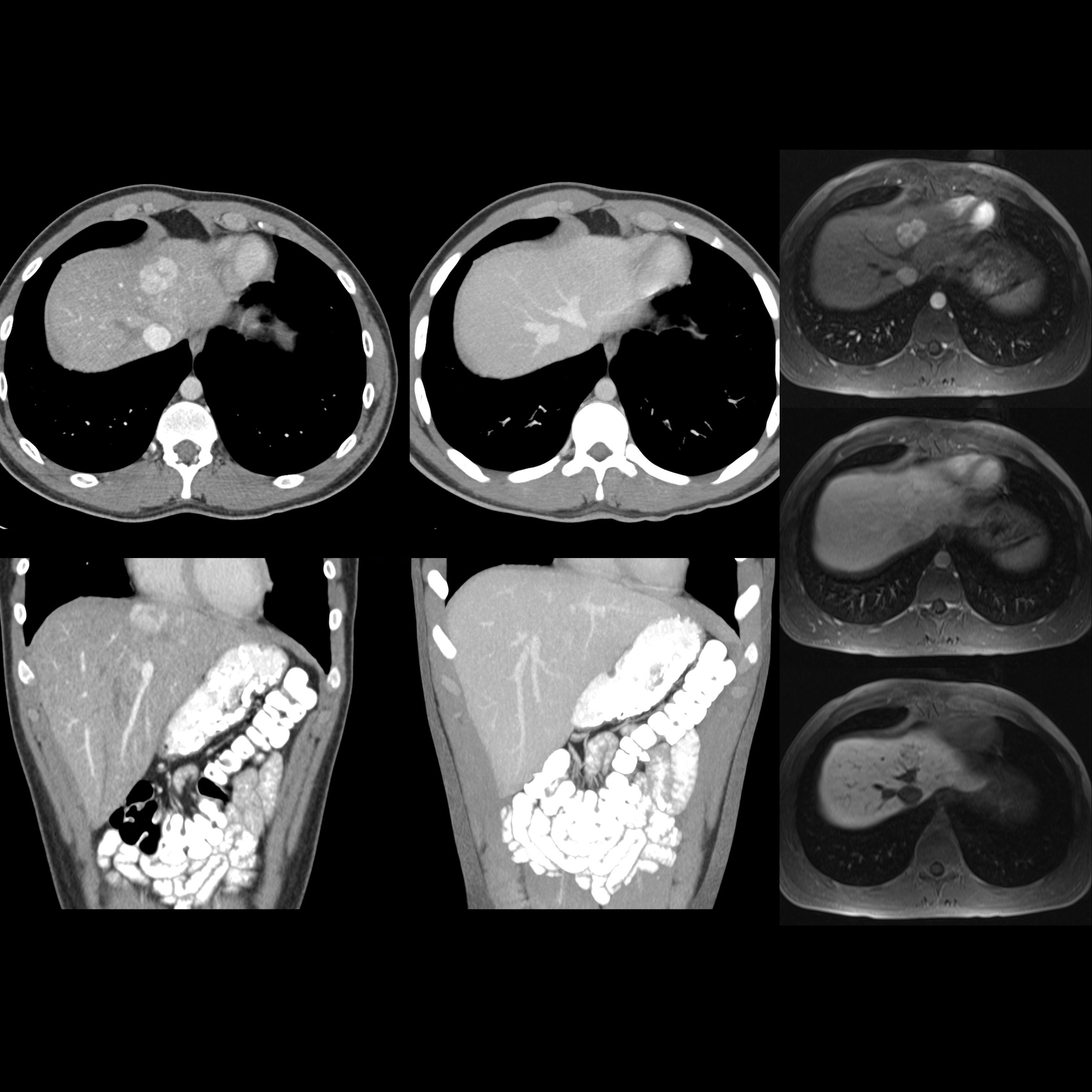 Teenager with
a liver lesion. The diagnosis was focal nodular hyperplasia.
pediatricimaging.org • CC-by-nc-sa 4.0 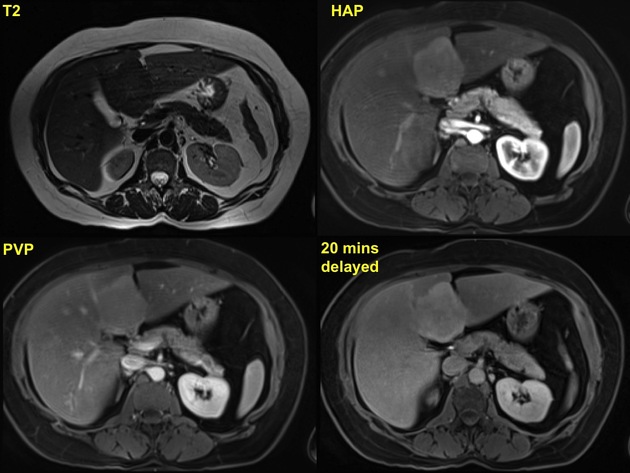 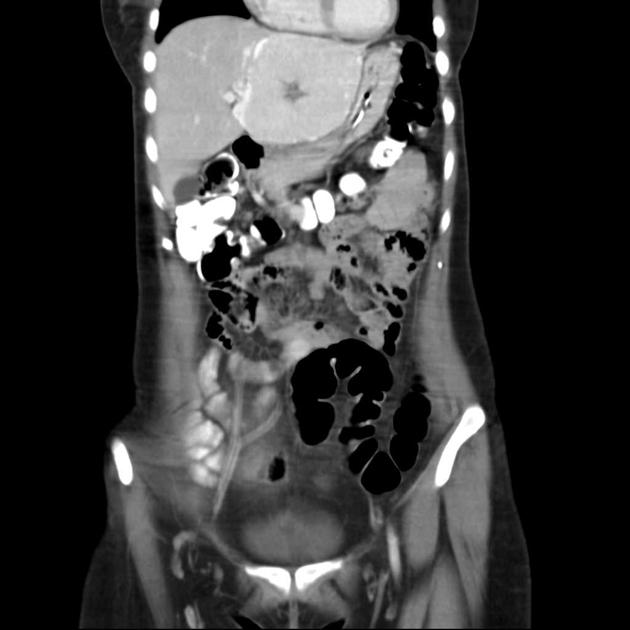 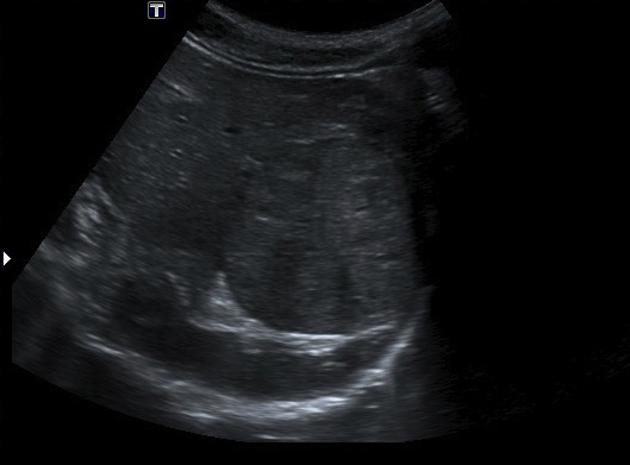 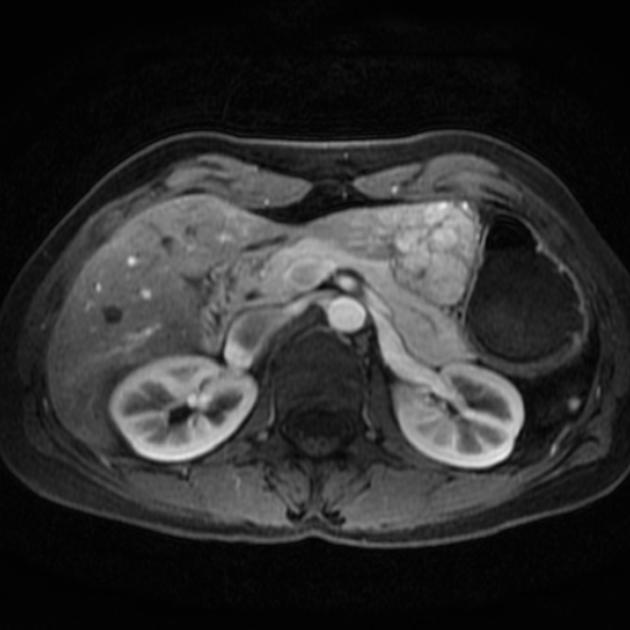 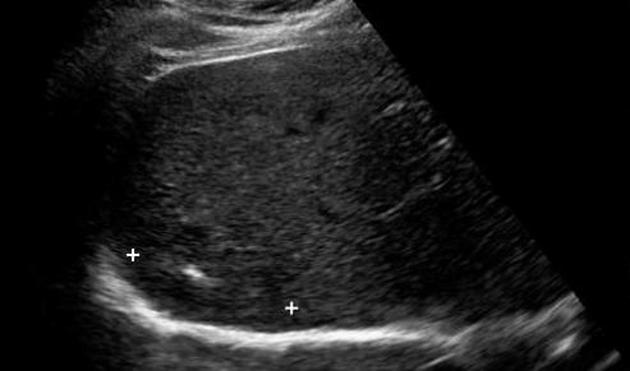 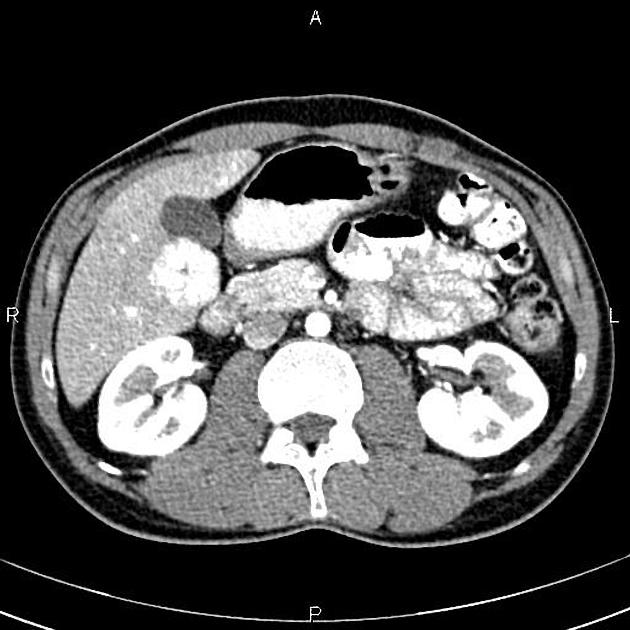 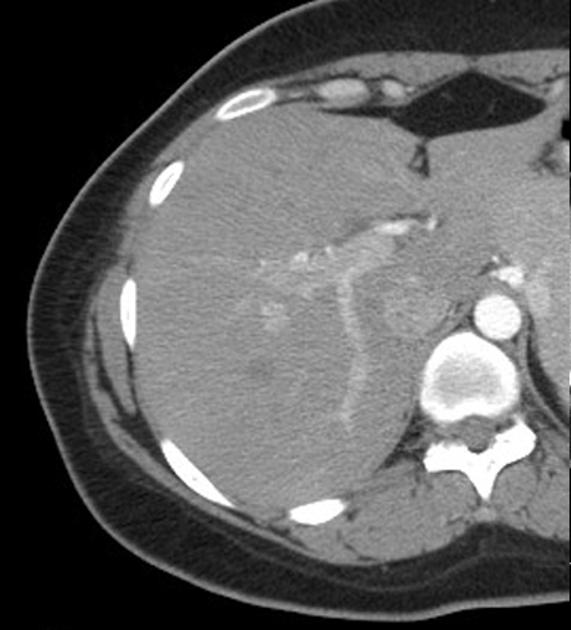 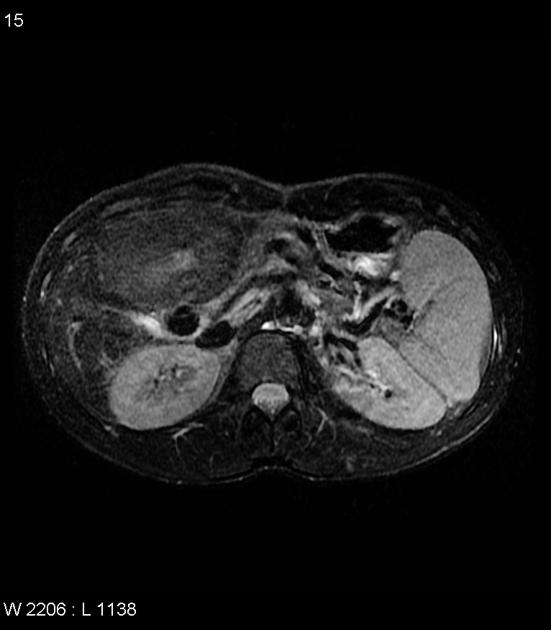 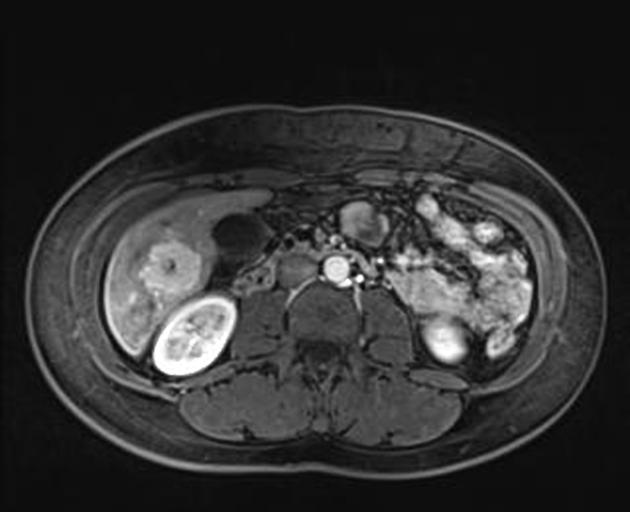 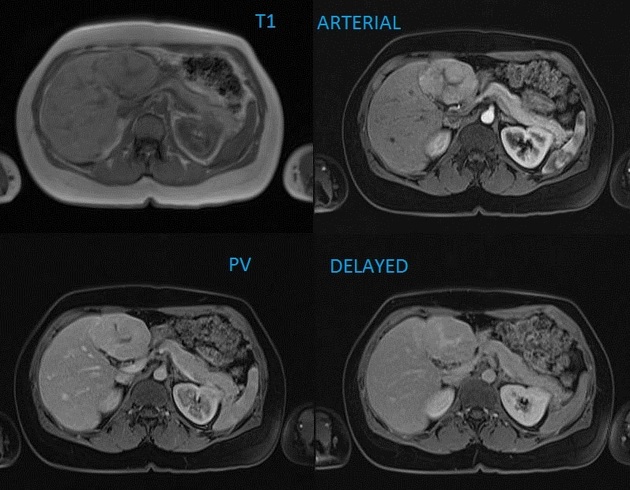 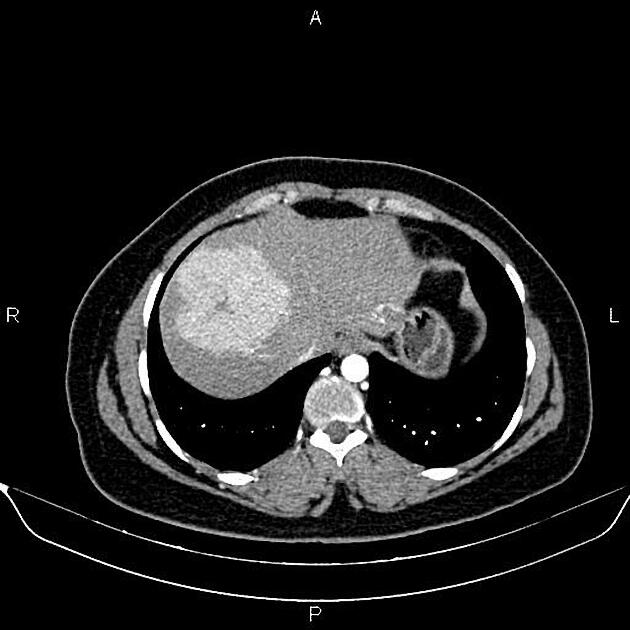 Focal nodular hyperplasia (FNH) is a regenerative mass lesion of the liver and the second most common benign liver lesion (most common is a hemangioma). Many FNHs have characteristic radiographic features on multimodality imaging, but some lesions may be atypical in appearance. Focal nodular hyperplasias are typically asymptomatic lesions, usually requiring no treatment.

Focal nodular hyperplasia is most frequently found in young to middle-aged adults, with a strong female predilection ; ~15% (range 10-20%) occur in men . Exogenous estrogens do not cause FNH, nor do they cause an increase in size of these masses. The isolated occurrence is the commonest but in up to 20% may be multiple and could occur with other lesions such as hemangiomas, etc.

Recent studies have shown that focal nodular hyperplasia can occur de novo after chemotherapy treatment with oxaliplatin (chemotherapy agent used for bowel and other types of cancer) .

Association with other benign lesions is commonly seen (~25%) :

These masses are either found incidentally on imaging or present due to mass effect, with right upper quadrant pain in 20% . Unlike hepatic adenomas, FNHs are only rarely complicated by spontaneous rupture and hemorrhage .

Macroscopically, typical lesions demonstrate a mass which is often quite large with well-circumscribed margins but poorly encapsulated. A characteristic feature is a prominent central scar with radiating fibrous septa, but this is present in less than 50% of cases . A large central artery is usually present with spoke wheel like centrifugal flow (no portal veins).

Histologically the lesion is composed of abnormal nodular architecture, malformed vessels, and cholangiolar proliferation. Nearly normal hepatocytes are arranged in one to two cell-thick plates. Bile ductules are usually found at the interface between hepatocytes and fibrous regions . Kupffer cells are present .

There is no malignant potential .

An atypical FNH refers to a lesion which lacks the central scar and central artery, thus harder to distinguish from other lesions on gross inspection and imaging, or abnormal nodular architecture but with abnormal cholangiolar proliferation .

Nodules can grow and disappear, and new nodules can appear even after resection .

Some authors also describe division of atypical focal nodular hyperplasia into several variants which include :

As focal nodular hyperplasia is usually treated conservatively, accurate imaging is essential in preventing unnecessary intervention. Moreover, in women of childbearing age, hepatic adenoma is the chief differential diagnosis and biopsy of the latter can result in hemorrhage .

It should be noted that up to 20% of patients with a focal nodular hyperplasia will have multiple lesions and a further 23% will have hemangiomas .

The echogenicity of both focal nodular hyperplasia and its scar is variable, and it may be difficult to detect on ultrasound. Some lesions are well-marginated and easily seen whereas others are isoechoic with surrounding liver. Detectable lesions characteristically will demonstrate a central scar with the displacement of peripheral vasculature on color Doppler examination. However, these findings are seen in only 20% of cases .

A multiphase liver CT is ideal . On the non-contrast series, the lesion is usually hypo- or isoattenuating but may appear hyperattenuating if the rest of the liver is fatty. A hypoattenuating central scar can be seen in up to 60% of lesions >3 cm in size .

In the portal venous phase, the lesion becomes hypo/isoattenuating to liver and poorly visualized in many studies. FNH is generally not associated with fat, calcification or hemorrhage.

The fibrotic scar demonstrates enhancement on delayed scans in up to 80% of cases .

Sulfur colloid is taken up by the reticuloendothelial system, specifically the Kupffer cells which line the hepatic sinusoids . Because FNH is essentially focally malformed hepatic tissue, these lesions contain functioning Kupffer cells and take up technetium-99m sulfur colloid on nuclear imaging.

Classically, uptake pattern of Tc-99m sulfur colloid can be used to distinguish FNH from other liver lesions which do not contain normal liver cellularity, such as hepatic adenomas, HCC, and hepatic metastases. FNH is associated with normal or increased radiotracer uptake, whereas the others are associated with focal decreased uptake . Intense focal uptake is thought to be quite specific for FNH .

That being said, up to 30% of FNH lesions present with photopenia . Hepatic adenomas may rarely contain Kupffer cells and may be associated with normal uptake .

HIDA radiopharmaceuticals are taken up and excreted by hepatocytes in a similar way to bilirubin and bile. Since FNH contains all hepatic cell types (including hepatocytes and bile canaliculi) HIDA can be used to image FNH. Limited evidence suggests that HIDA scans might be more accurate than the more traditionally used sulfur colloid scan.

The usual HIDA scan findings consistent with an FNH lesion are increased blood flow, prompt hepatic uptake and delayed tracer clearance from the lesion. This pattern is reportedly seen in more than 90% of patients .

Focal nodular hyperplasia is benign, with no malignant potential and a minuscule risk of complication (rupture, hemorrhage) and thus are usually treated conservatively .