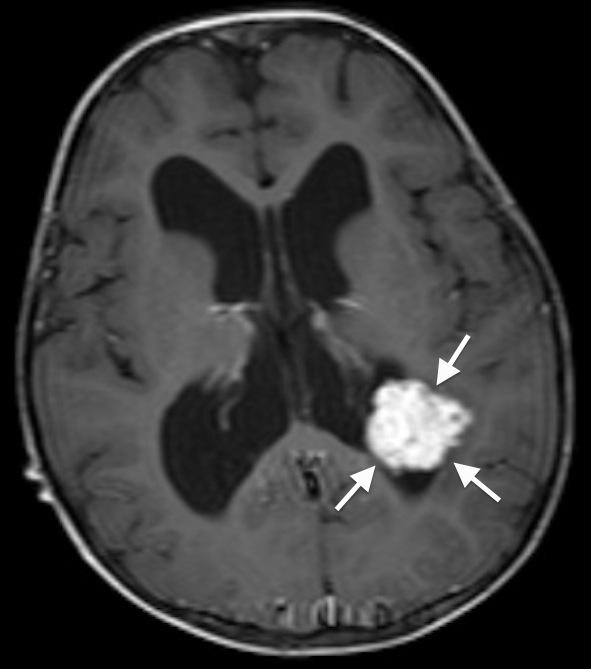 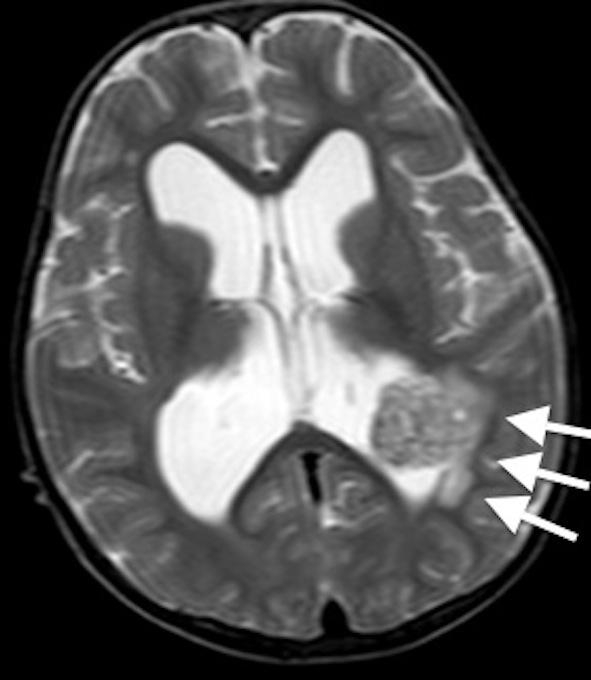 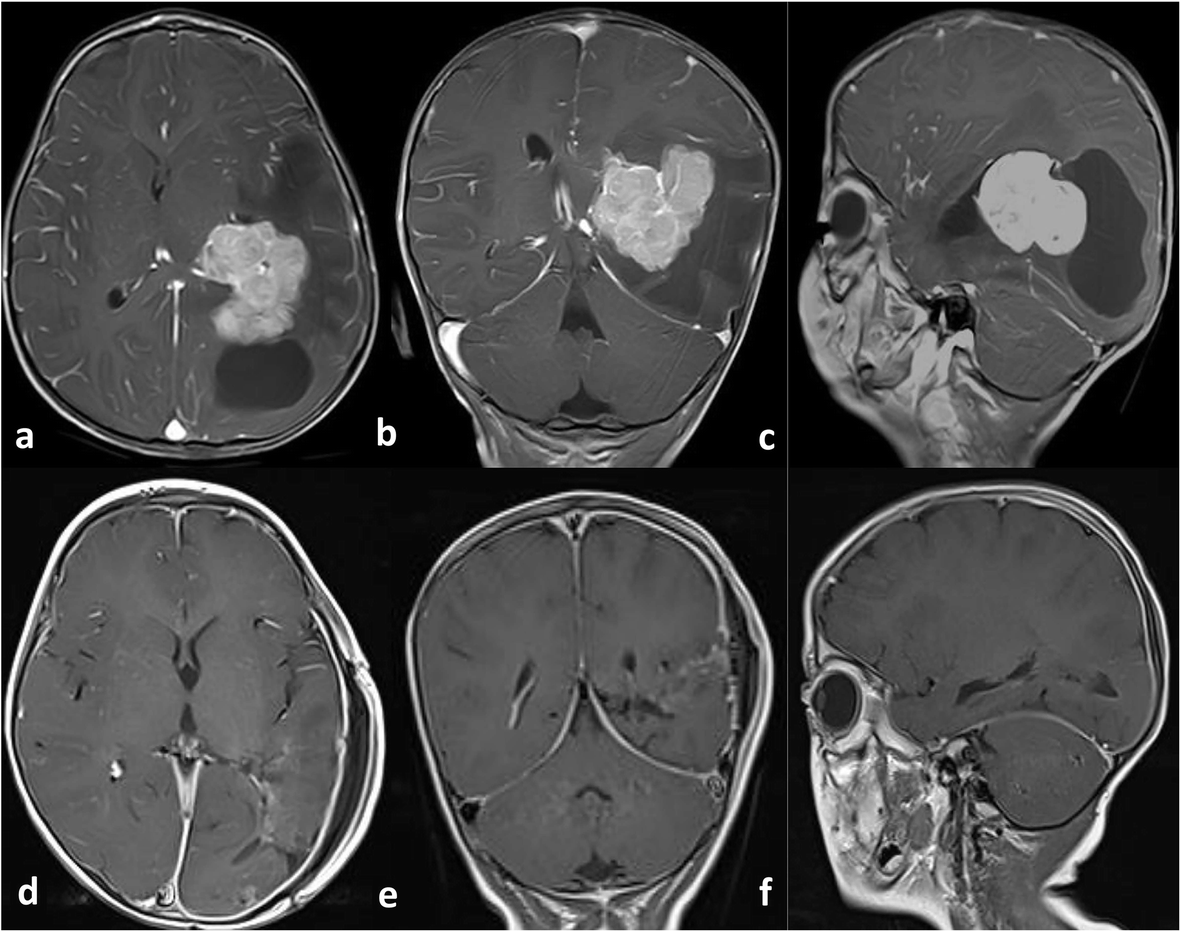 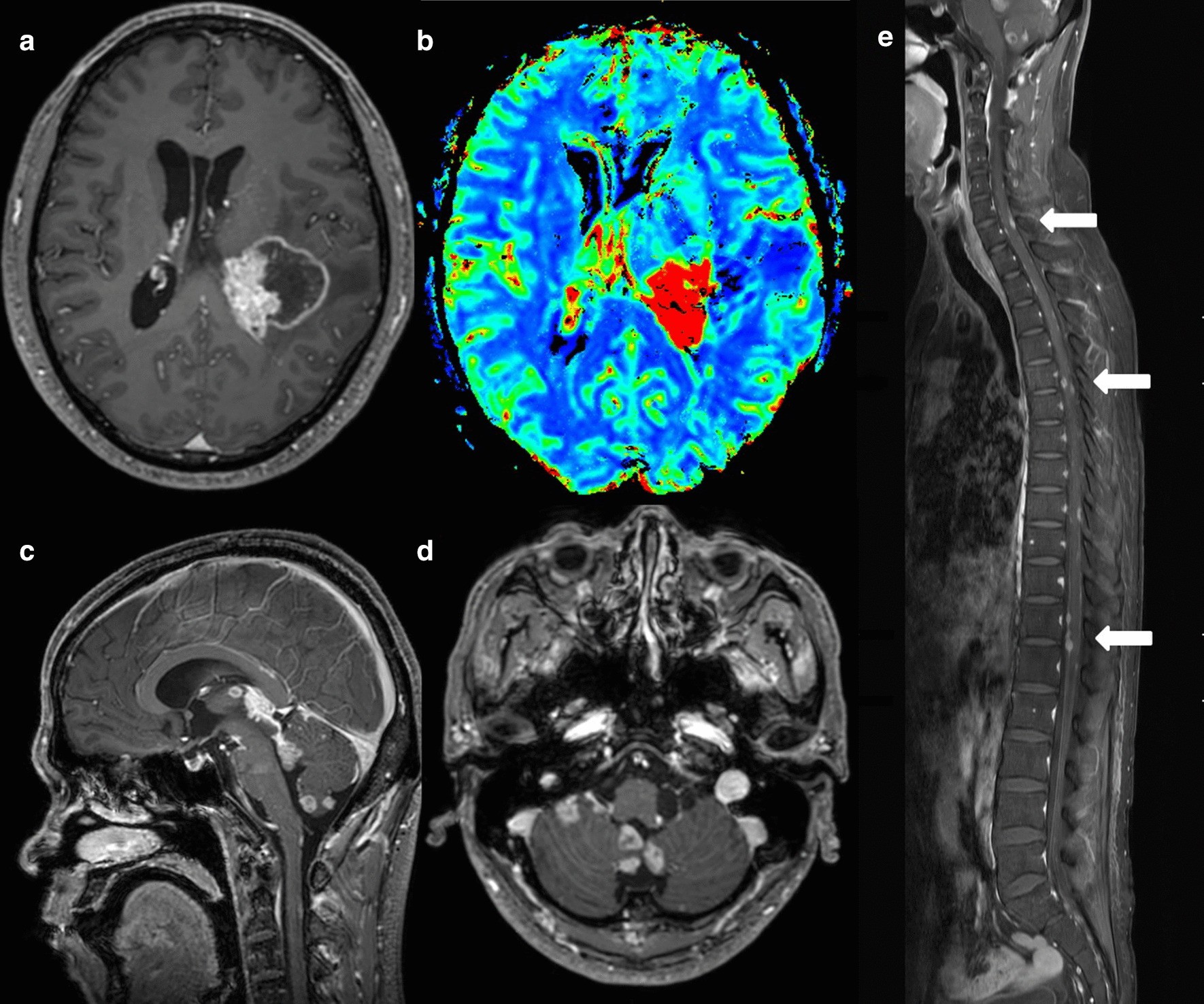 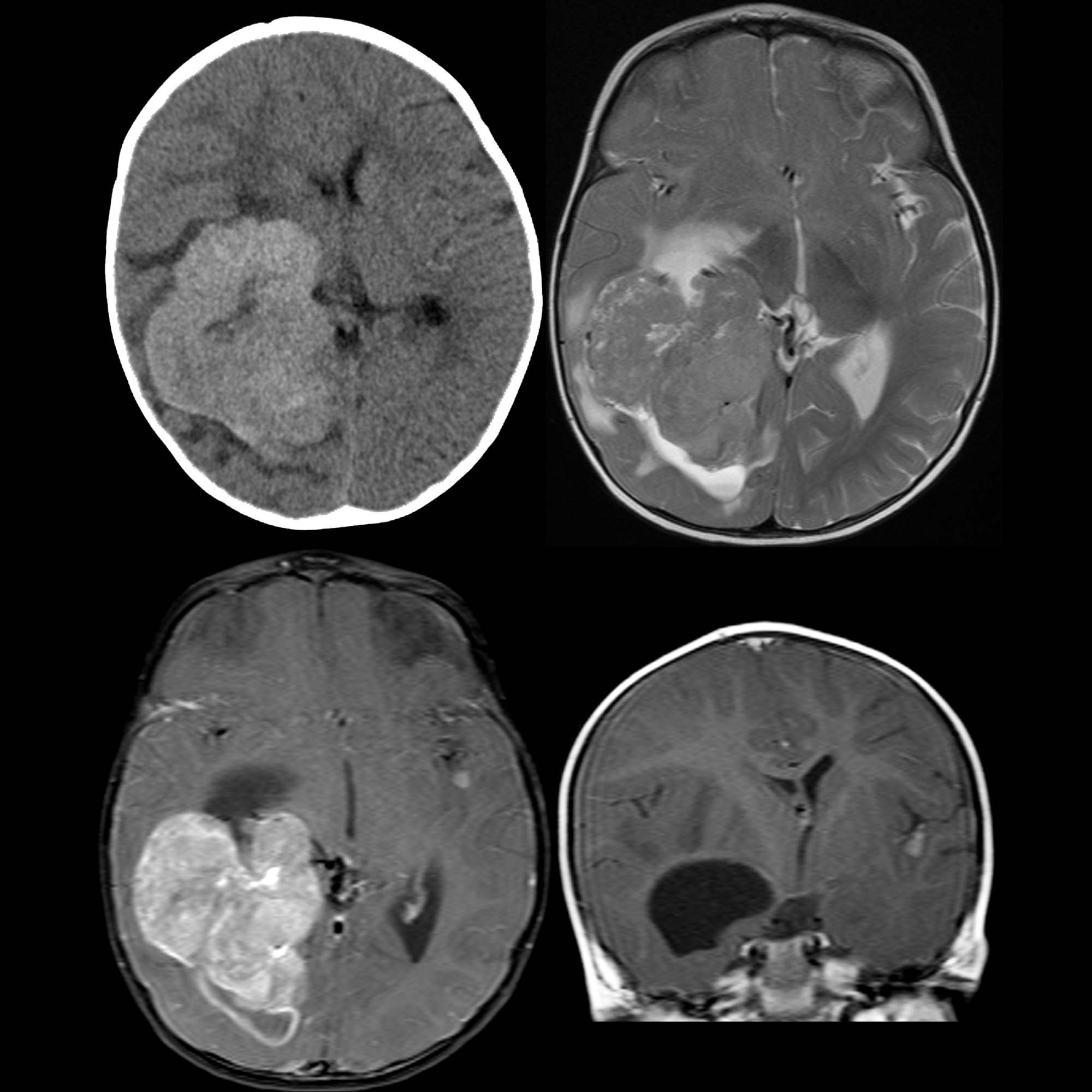 Toddler who
was sleepy after a fall. Axial CT without contrast of the brain (above left) shows a large high density mass that contains a few punctate calcifications in the trigone of the right lateral ventricle that is causing midline shift to the left. Axial T2 MRI (above left) of the brain shows the mass to surrounded by edema and to be causing some transependymal flow of cerebrospinal fluid. Axial (below left) and coronal (below right) T1 MRI with contrast show homogenous enhancement of the mass. A separate enhancing nodule is also noted in the left temporal lobe in the region of the left Sylvian fissure.The diagnosis was choroid plexus carcinoma.
pediatricimaging.org • CC-by-nc-sa 4.0
Hallo!
Radiopaedia • CC-by-nc-sa 3.0 • de

Choroid plexus carcinomas occur predominantly in children, typically in the first 5 years of life. They are rare, far less common than choroid plexus papillomas (which account for 80% of primary choroid plexus tumors), representing only 1-4% of pediatric brain tumors .

As is the case with choroid plexus papillomas, presentation usually is as a result of hydrocephalus. Symptoms include increasing head circumference and headaches. Papilledema may be visible on fundoscopy. In addition, choroid plexus carcinomas have a tendency to invade the adjacent brain and thus may present with focal neurological dysfunction .

They originate from choroid plexus epithelium and typically arise de novo; rarely they may represent malignant transformation of a pre-existing choroid plexus papilloma .

It has been suggested that to make the diagnosis of choroid plexus carcinoma, at least 4 of the following 5 features should be present :

Microcalcifications and hemorrhage may be present. Brain parenchymal invasion is a feature, and if present helps to distinguishes choroid plexus carcinomas from choroid plexus papillomas.

The most common underlying genetic mechanism identified in their formation is dysfunction of the p53 tumor suppressor gene (TP53).

On non-contrast CT choroid plexus carcinomas are heterogeneous and typically iso to hyperdense to grey matter. Calcification may be seen in 20-25% of cases.

Contrast enhancement is usually prominent but heterogeneous with areas of necrosis and cyst formation evident.

The tumors may have CSF seeding, therefore imaging of the entire neural axis is recommended prior to surgery.

Surgical en-bloc resection is the mainstay of treatment and can result in a cure, achieved in as many as 50% of cases, but this result has only been reported in some selected series . In general, survival seems to be much worse than this, and hinges upon the ability to achieve gross complete macroscopic resection. In such cases, a 5-year survival of up to 86% can be achieved. In cases where resection is incomplete, 5-year survival is much lower 26% . Both radiotherapy and chemotherapy are used .

Further differentials to be considered in a large tumor, where the intraventricular origin may be difficult to ascertain, include PNET and GBM.