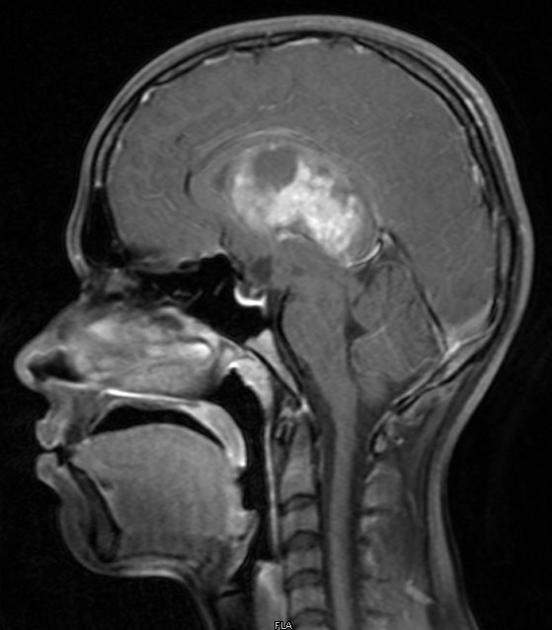 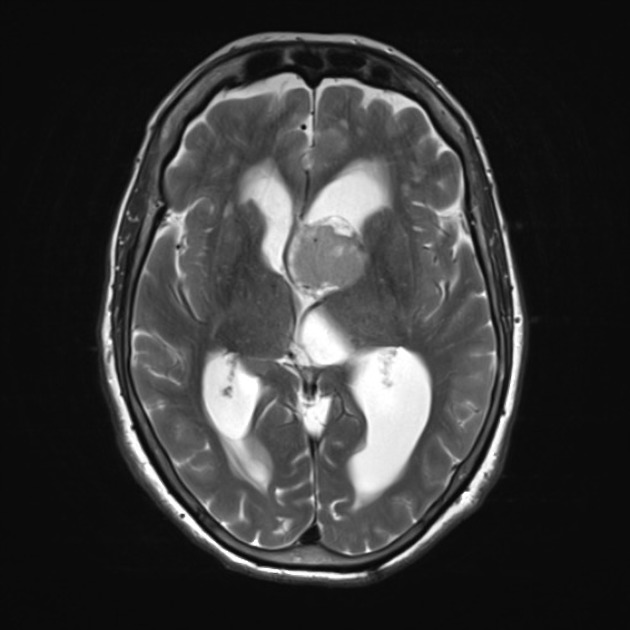 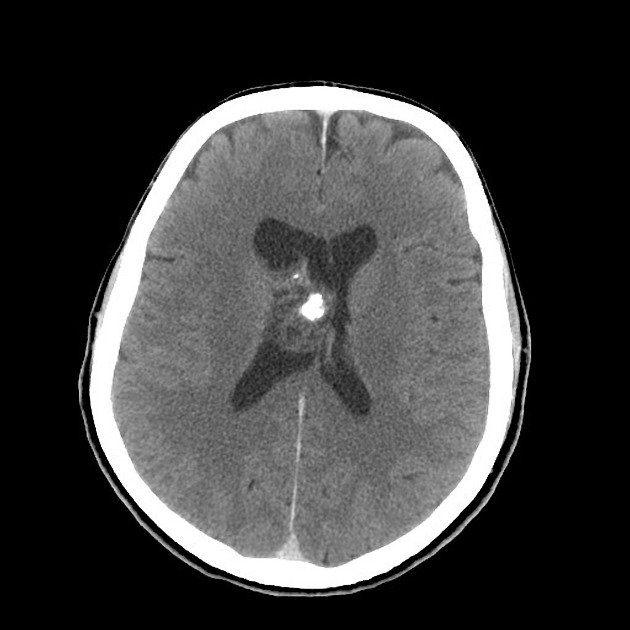 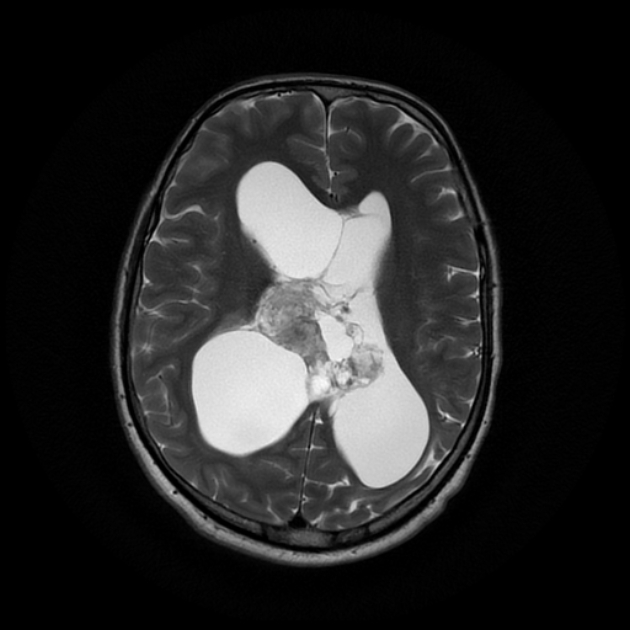 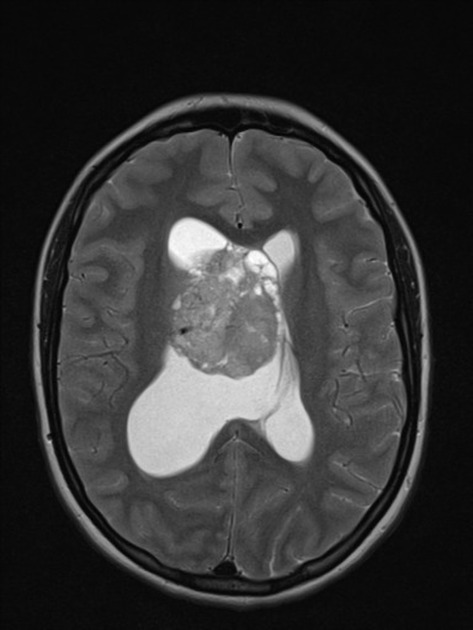 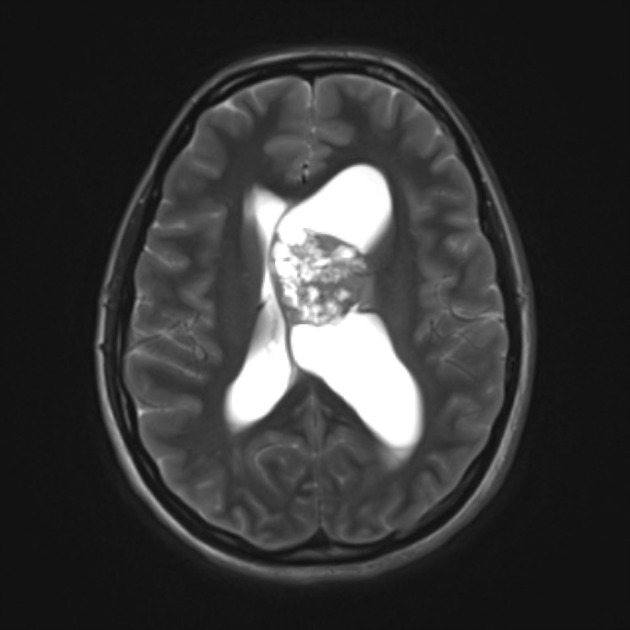 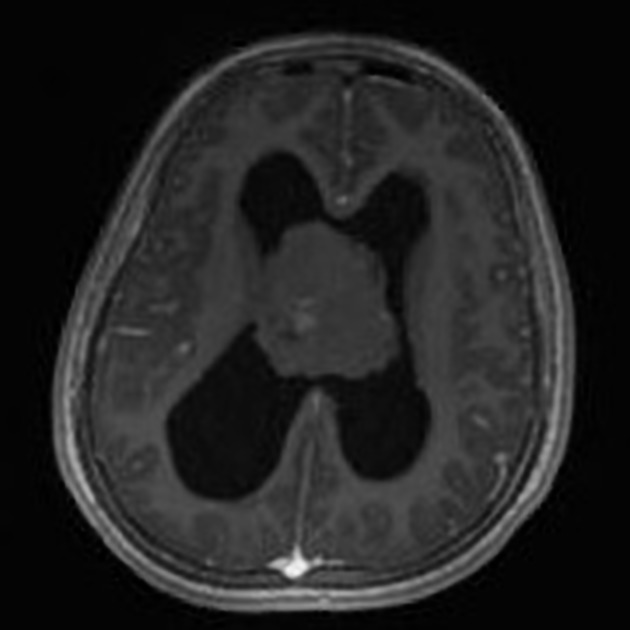 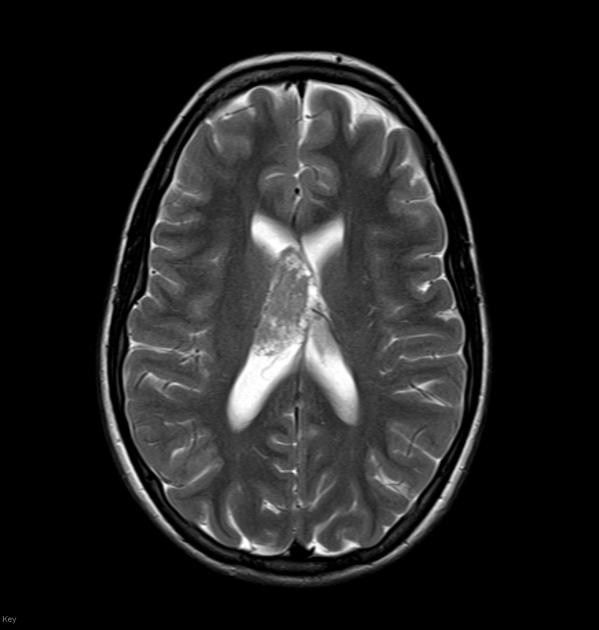 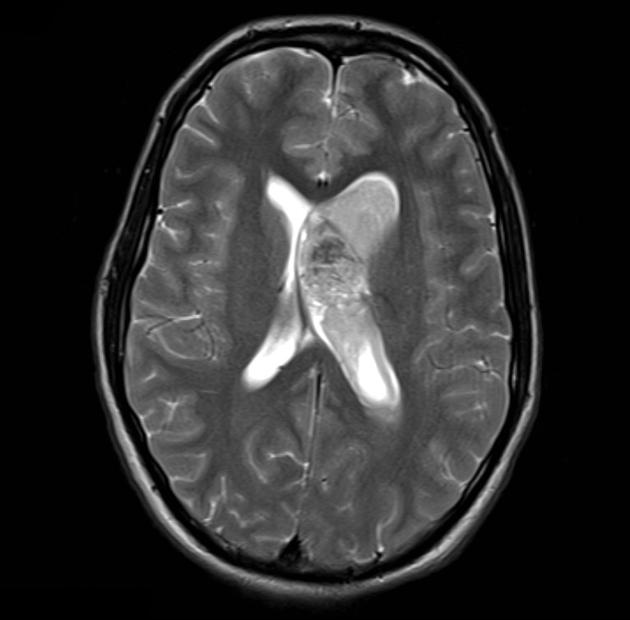 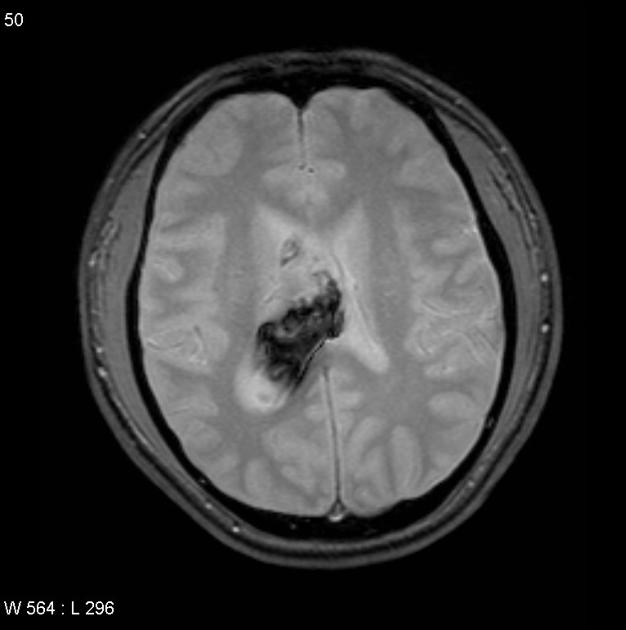 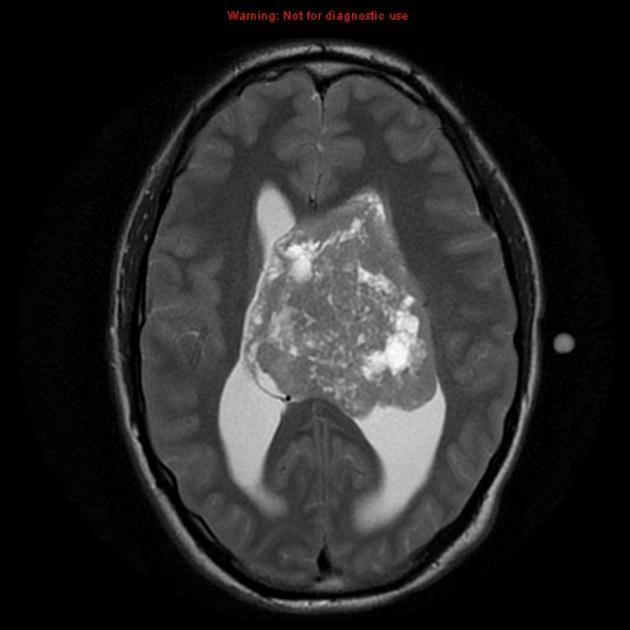 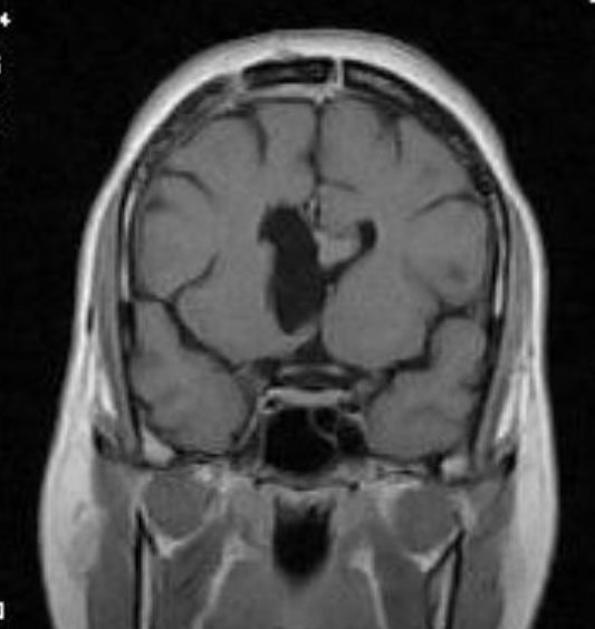 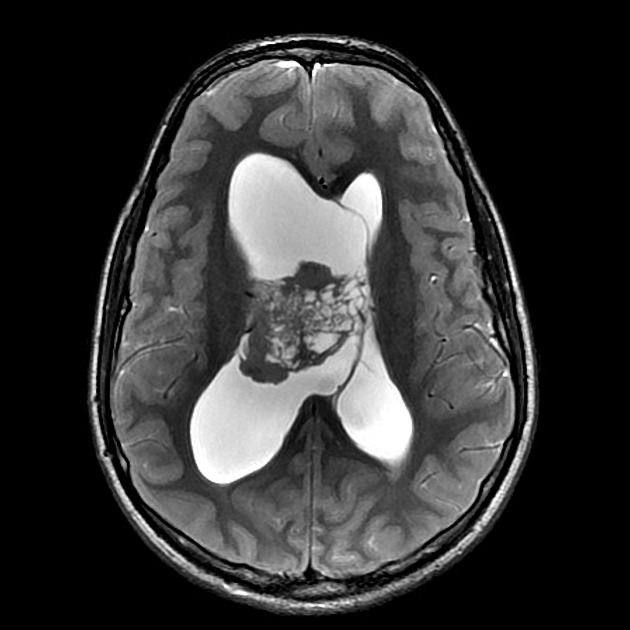 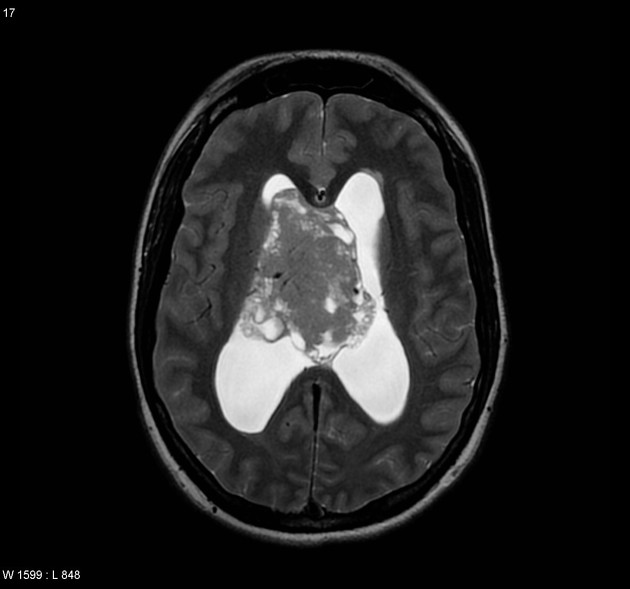 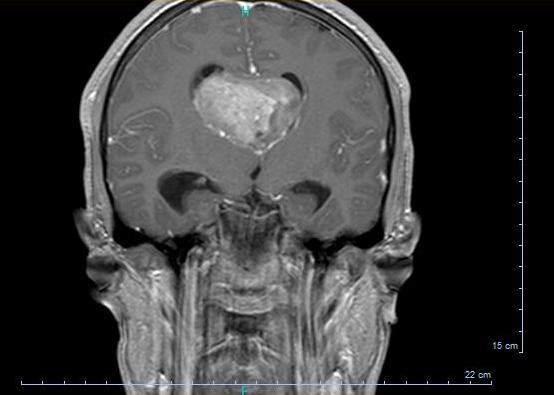 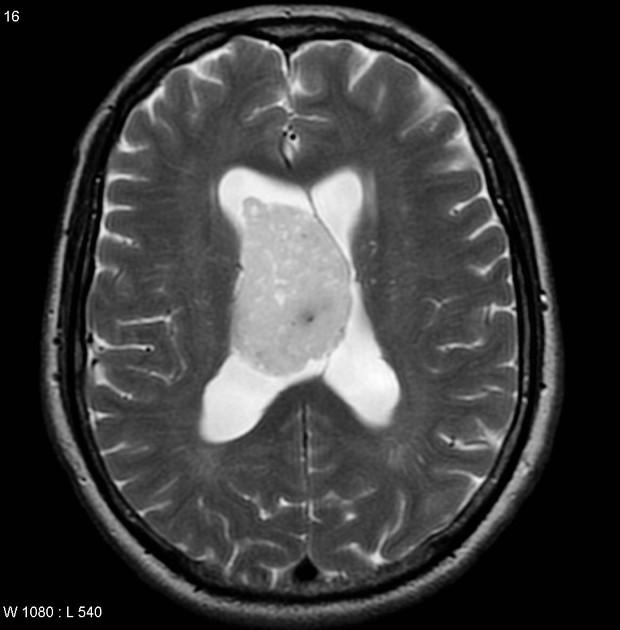 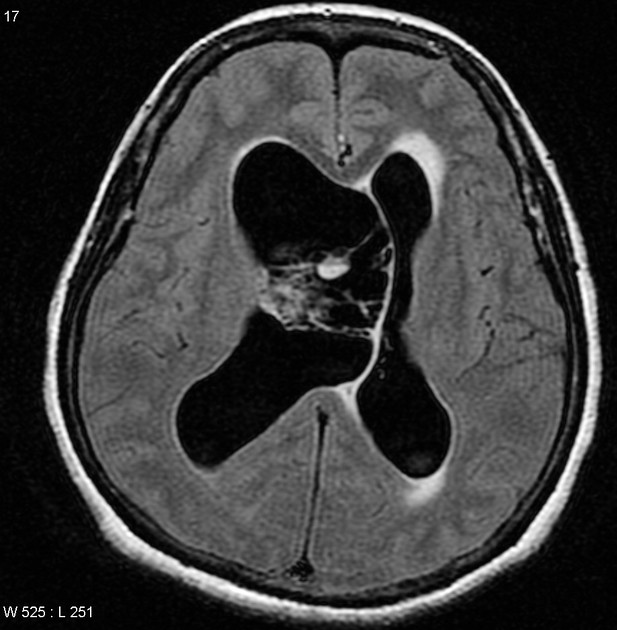 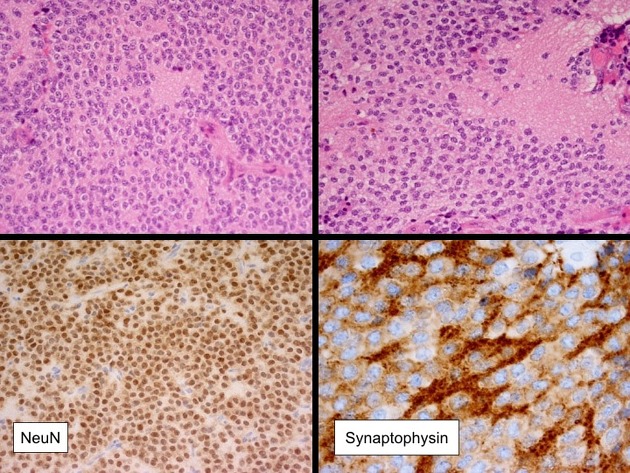 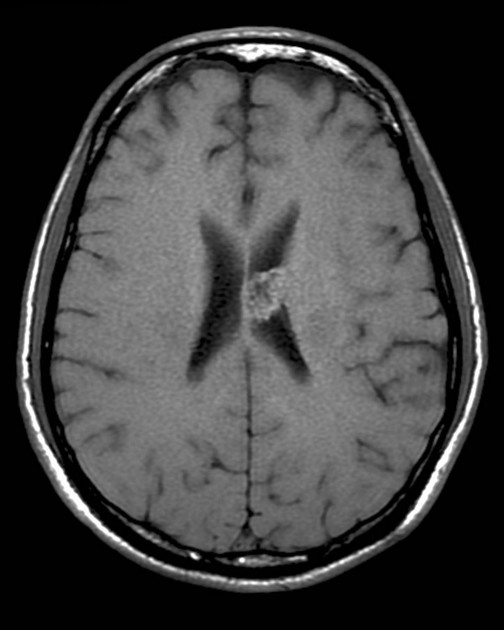 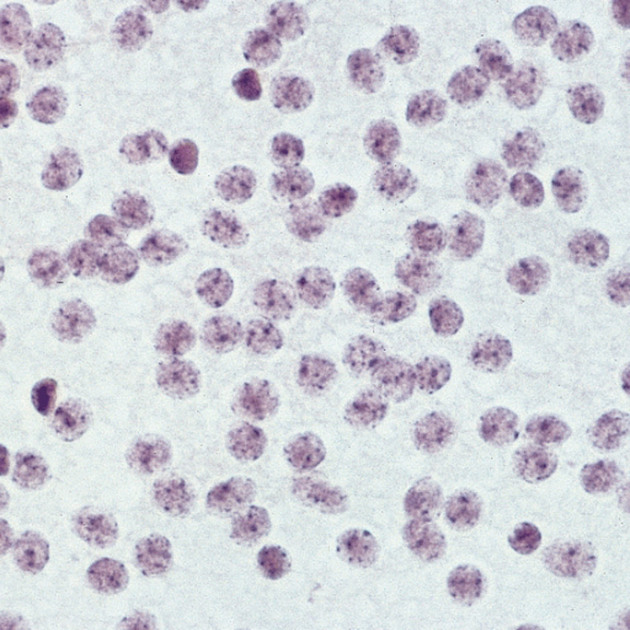 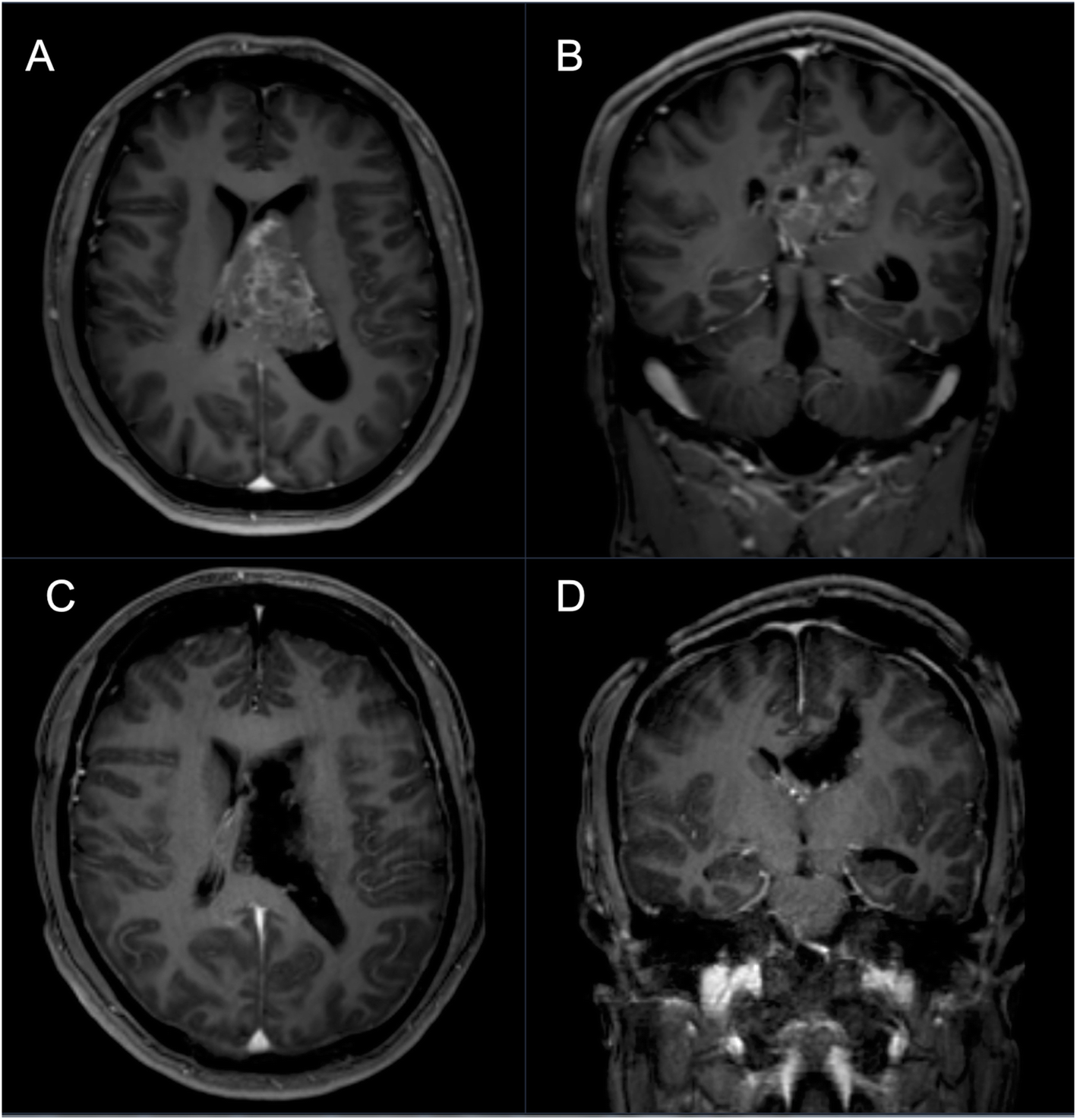 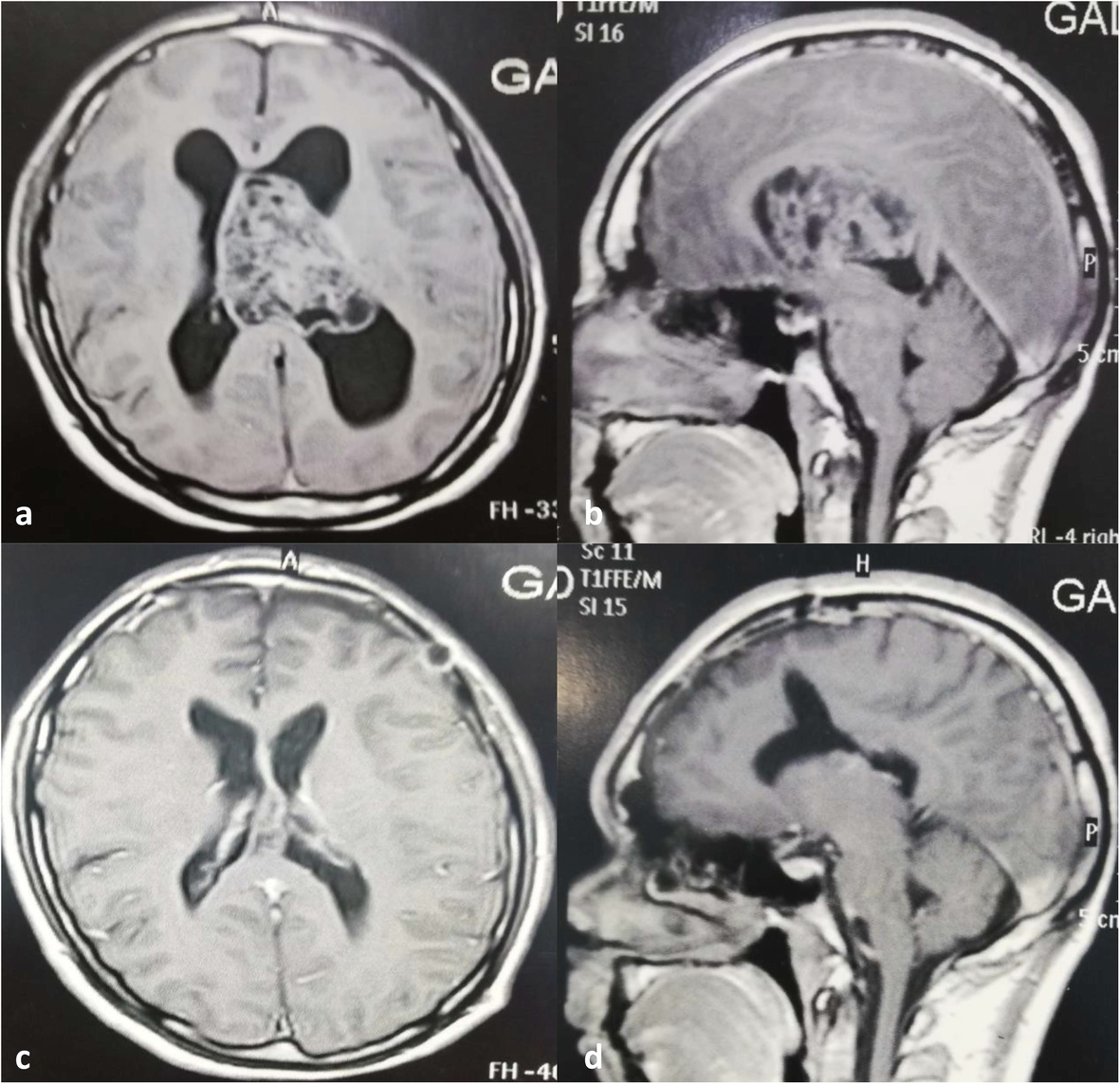 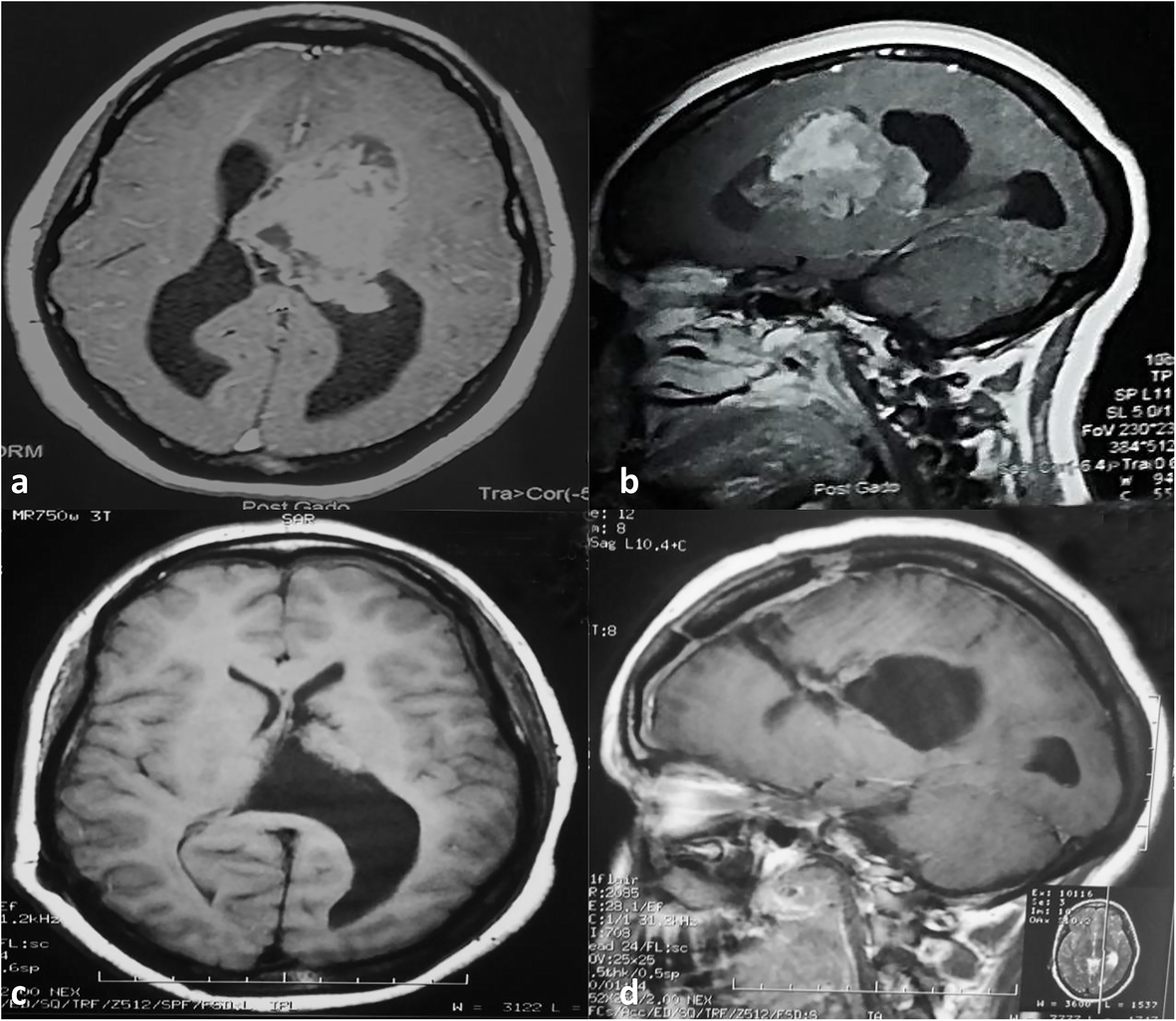 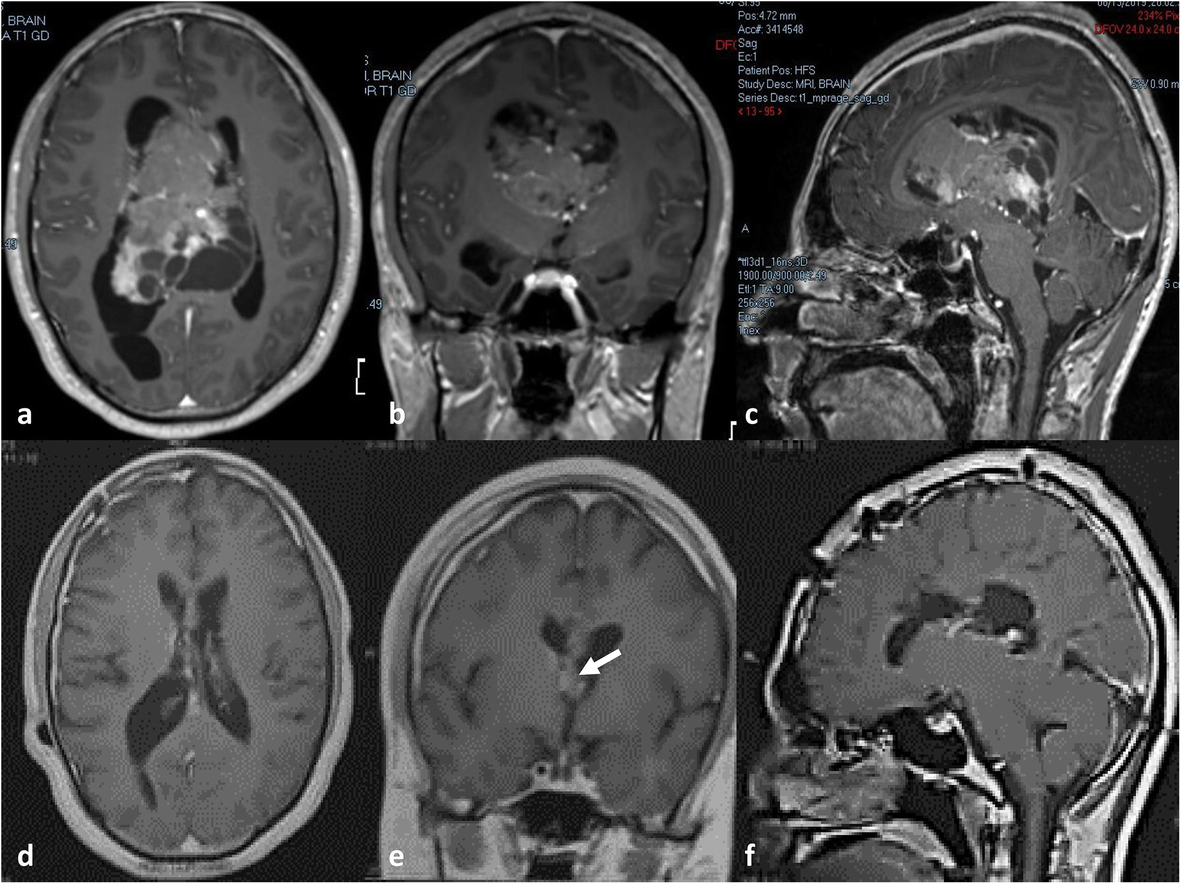 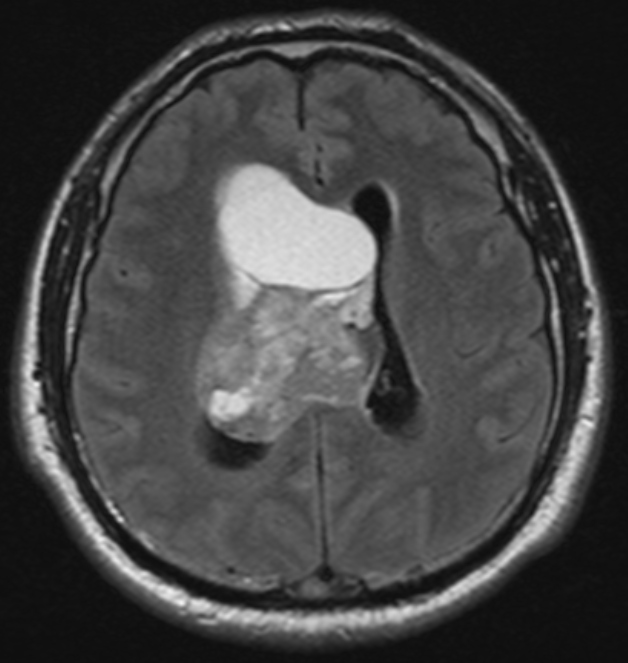 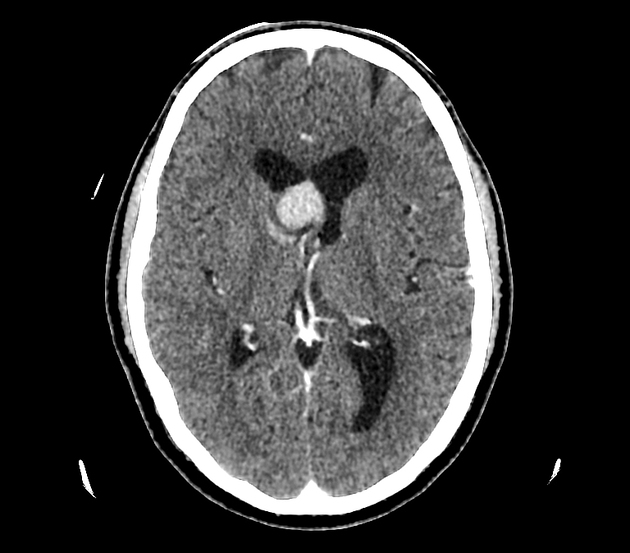 Central neurocytomas are WHO grade II neuroepithelial intraventricular tumors with fairly characteristic imaging features, appearing as heterogeneous masses of variable size and enhancement within the lateral ventricle, typically attached to the septum pellucidum. They are typically seen in young patients and generally have a good prognosis provided a complete resection can be achieved.

Extraventricular neurocytomas (previously known as cerebral neurocytomas) are distinctly uncommon and discussed in a separate article.

Central neurocytomas are typically seen in young patients (70% diagnosed between 20 and 40 years of age) and account for less than 1% (0.25-0.5%) of intracranial tumors . There is no reported gender predilection .

A relatively short clinical course, typically only a few months, is most common. Rarely central neurocytomas may be associated with sudden death secondary to acute ventricular obstruction . Also rare, is a sudden presentation due to intraventricular hemorrhage .

The initial description classified them as WHO grade I lesions. However, this was upgraded in 1993 to WHO grade II (and remains so in the 2016 version) as it was recognized that at least some of these tumors exhibited more aggressive behavior .

The vast majority of central neurocytomas are located entirely within the ventricles. Typical locations include :

The cells are typically uniform and round with a salt and pepper finely speckled chromatin . They also demonstrate areas of variable architecture that are reminiscent of other tumors, including oligodendrogliomas, pineocytomas and neuroendocrine tumors .

Immunohistochemistry confirms the purely neuronal origin by positivity to neuronal markers such as :

A tumor blush is frequently identified, with the mass supplied by choroidal vessels. No large feeding arteries are usually seen.

Complete surgical resection is usually curative (5 years survival 81%). When only incomplete resection possible or extraventricular extension is present, then adjuvant radiotherapy (and sometimes chemotherapy) are added, although their benefit is not well established.

Cases of CSF dissemination have been reported, but are rare .