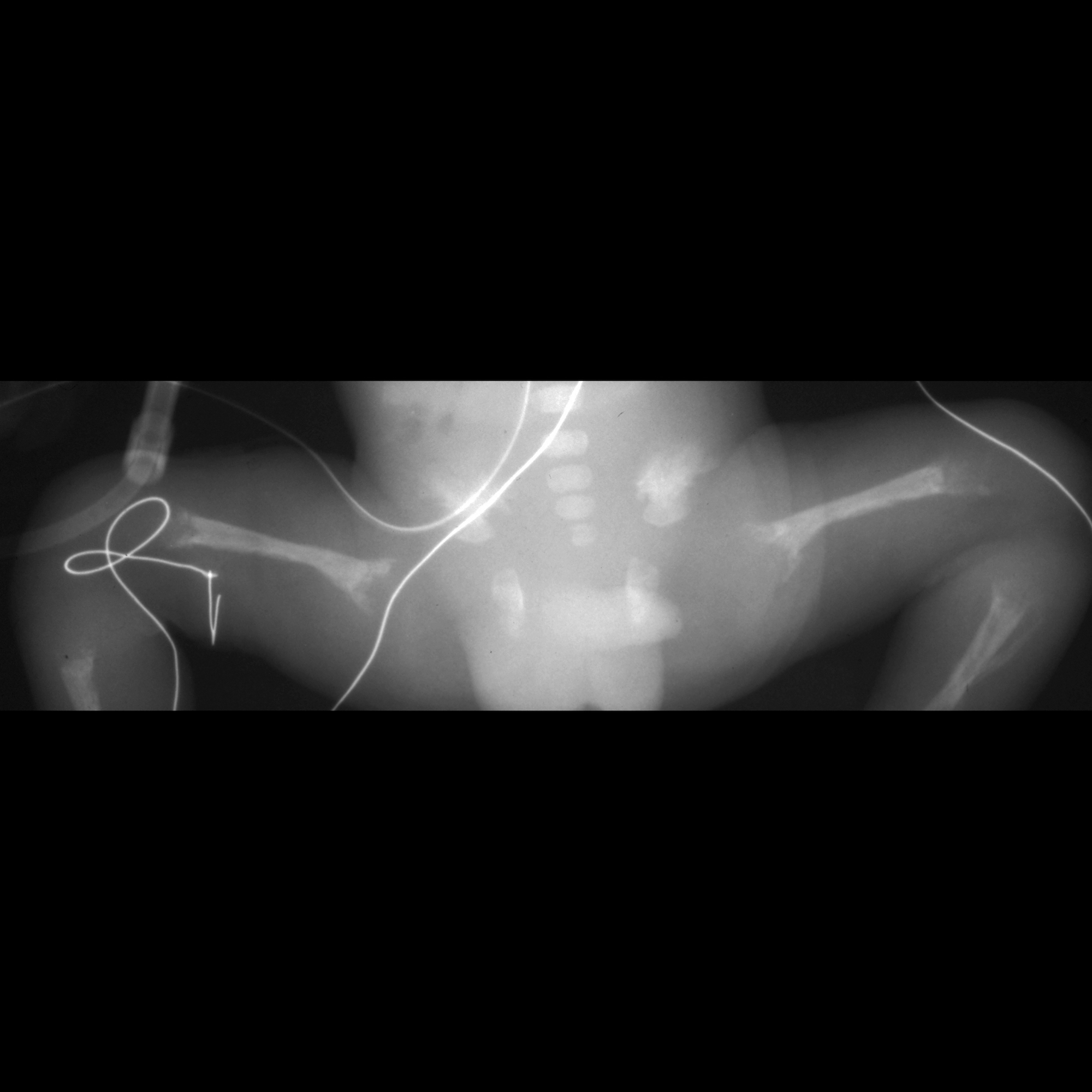 Infant with
abnormal lower extremity posturing. AP radiograph of the pelvis shows an osteosclerotic appearance to the bones with obliteration of the marrow spaces and a developing bone within bone appearance especially in the femurs.The diagnosis was osteopetrosis.
pediatricimaging.org • CC-by-nc-sa 4.0

Osteopetrosis, also known as Albers-Schönberg disease or marble bone disease, is an uncommon hereditary disorder that results from defective osteoclasts. Bones become sclerotic and thick, but their abnormal structure actually causes them to be weak and brittle.

There are two separate subtypes of osteopetrosis:

Presentation, in the majority of cases, is with a fracture due to the weakened bones. Fractures are often transverse with multiple areas of callus formation and normal healing.

Additionally, there is crowding of the marrow, so bone marrow function is affected resulting in myelophthisic anemia and extramedullary hematopoiesis with splenomegaly. This may terminate in acute leukemia.

Both forms are congenital abnormalities with localized chromosomal defects. These result in defective osteoclasts and overgrowth of bone. The bones become thick and sclerotic, but their increased thickness does not improve their strength. Instead, their disordered architecture results in weak and brittle bones. The osteoclasts lack carbonic anhydrase, which may play a role in the pathophysiology of the disease.

The features are dependent on the subtype of osteopetrosis and are detailed in the individual articles:

Treatment is with bone marrow transplant and resultant normalization of bone production. The prognosis for the autosomal dominant adult subtype is good with a normal life expectancy. However, the autosomal recessive infantile subtype can result in stillbirth or death in infancy, with few patients living past middle age.

The term is derived from the Greek words 'osteo' meaning bone and 'petros' meaning stone. It was first described by German radiologist Heinrich Ernst Albers-Schönberg (1865-1921) in 1904. Interestingly Albers-Schonberg was the first Professor of Radiology in Germany - and perhaps globally - the Chair was bestowed on him by the University of Hamburg in 1919 .