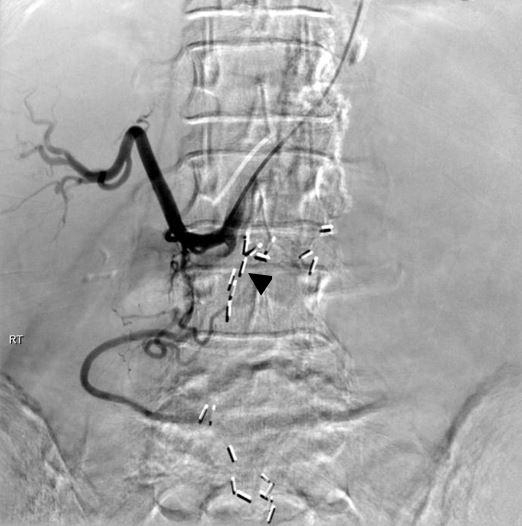 Peptic ulcer disease (PUD) encompasses a number of entities, united by the presence of mucosal ulceration secondary to the effects of gastric acid. Since the recognition of Helicobacter pylori as a common causative agent and the development of powerful anti-acid medications, peptic ulcer disease has become comparatively rare in western populations.

The majority of cases are due to infection with Helicobacter pylori. This can be confirmed with biopsies obtained at endoscopy and urea breath test, the combination of the two resulting in a detection rate of close to 100% .

Typically patients with upper abdominal pain and discomfort which is epigastric in location and 'gnawing' in character . Classically it is relieved by eating or antacids.

Presentation may also be with one of a number of complications, including :

Peptic ulceration represents the common end-point of any number of processes which result in a disruption of the normal balance between gastric acid production and protective mechanisms of the mucosa. Regardless of the underlying cause, acid initially results in inflammation and later superficial erosions and eventually frank ulceration.

Heliocobacter pylori, a spiral gram-negative bacterium has been identified as the leading cause of duodenal ulceration .

Although historically barium studies were the mainstay of investigation for suspect peptic ulceration, endoscopy has in most centers largely replaced the barium meal. Many current younger radiologists/training radiologists have rarely if ever performed a full diagnostic barium meal, and the 'art' of this examination is gradually being lost.

In the acute setting CT is the modality of choice for assessing a patient with acute abdominal pain, and in some settings may be able to identify the site of bleeding prior to endoscopy.

Abdominal films have little role in the setting of vague/chronic upper abdominal pain and have a very low yield.

In the acute setting, an erect chest x-ray is invaluable as it not only often allows the diagnosis of pneumoperitoneum to be made with confidence, but also gives treating clinicians important information of the patients' general health (e.g. cardiomegaly, aspiration pneumonia, pulmonary metastases).

Barium meals are performed with liquid barium and an effervescent to distend the stomach with gas and allow a 'double-contrast' image.

Features of ulceration include :

Ideal technique and findings depend on the presentation.

Perforation is usually a straightforward diagnosis, often with abundant pneumoperitoneum visible. The site of perforation is sometimes visible as a region of discontinuity in the stomach or duodenal wall.

Hemorrhage can be challenging to identify and requires a multi-phase scan without positive oral contrast (typically non-contrast, arterial and delayed phase scans are obtained) and the presence of active bleeding. Extravasation and pooling/accumulation of contrast into the lumen of the bowel may be seen.

Treatment depends on the clinical presentation. Historically emergent surgery for peptic ulcers was not uncommon, however the discovery of H. pylori and the ensuing revolution in management of the condition means that surgery is now rare as first-line therapy.

When dyspeptic symptoms lead to identification of upper gastrointestinal ulceration (usually via endoscopy) patients are typically treated with acid-lowering medications and tested for Helicobacter pylori, which if found is then eradicated. This is important not only to prevent recurrence of peptic ulceration and reflux esophagitis but also because it is associated with a number of malignancies including B-cell lymphoma and gastric adenocarcinoma .

Perforation is a surgical emergency and in the vast majority of patients, laparotomy and repair of the perforation are performed.