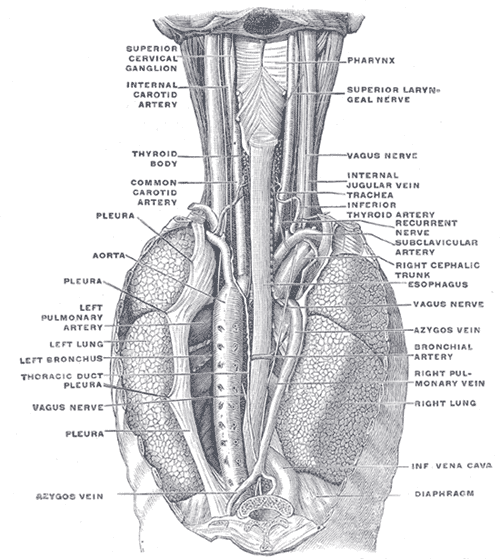 The position
and relation of the esophagus in the cervical region and in the posterior mediastinum. Seen from behind. (Poirier and Charpy.)
Wikipedia • Public domain
Hallo!
Radiopaedia • CC-by-nc-sa 3.0 • de

The bronchial arteries are the major supply of high-pressure oxygenated blood to the supporting structures of the lung, including the pulmonary arteries, yet they are responsible for only 1% of the lung blood flow overall.

Bronchial artery anatomy is variable, most commonly classified according to Cauldwell classification. A classic pattern of two left and a one right main bronchial arteries is found in ~70% of patients.

They are small caliber arteries, with a diameter of 1.5 mm at the origin, tapering down to approximately 0.5 mm at the pulmonary hila level .

There are usually two left bronchial arteries that arise directly from the anteromedial thoracic aorta :

The right bronchial artery has a common origin with a posterior intercostal artery called the intercostobronchial trunk (ICBT), and arises from the right anteromedial aspect of the thoracic aorta .

The bronchial arteries may arise from a wide range of arteries including :