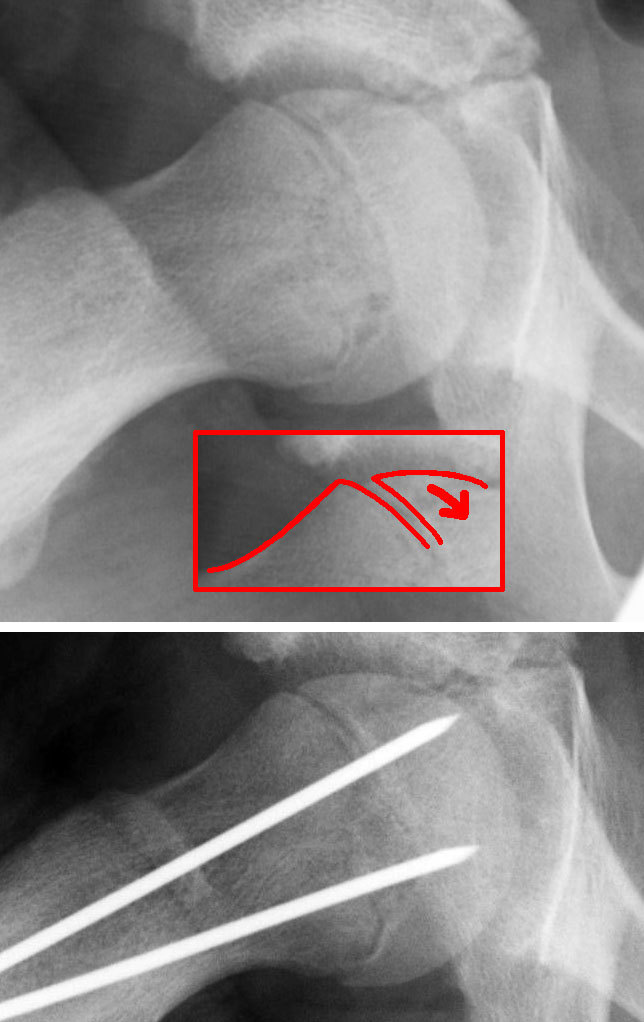 Trethowan"s
sign is when Klein"s line does not intersect the lateral part of the superior femoral epiphysis on an AP radiograph of the pelvis.
Wikipedia • CC0
Hallo!
Radiopaedia • CC-by-nc-sa 3.0 • de

Slipped upper femoral epiphysis is more common in boys than girls and more common in Afro-Caribbeans than Caucasians. The age of presentation is somewhat dependent on gender with boys presenting later (10-17 years) than girls (8-15 years) . Obesity is a significant risk factor.

Patients present with hip pain progressing to a limp and even leg length discrepancy.

If slipped upper femoral epiphysis is confirmed on imaging, the child should be rested, admitted, and not allowed to weight-bear.

Slipped upper femoral epiphysis is a type I Salter-Harris growth plate injury due to repeated trauma on a background of mechanical and probably hormonal predisposing factors.

During growth, there is a widening of the physeal plate which is particularly pronounced during a growth spurt. Also, the axis of the physis alters during growth and moves from being horizontal to being oblique. As the physis becomes more oblique, shear forces across the growth plate increase and result in an increased risk of fracture and resultant slippage.

Conditions that may predispose to SUFE include:

In all situations, especially when imaging children, the fewest number of radiographs, with the smallest exposed area is performed. Gonad protection is usually used in pelvic x-rays of children. However, there should always be one radiograph without the lead protection so that the entire pelvis is visualized.

The radiographs that are used will depend on the institution where you work:

In the pre-slip phase, there is a widening of the growth plate with irregularity and blurring of the physeal edges and demineralization of the metaphysis. This is followed by the acute slip which is posteromedial. In a chronic slip, the physis becomes sclerotic and the metaphysis widens (coxa magna).

The slip that occurs is posterior and, to a lesser extent, medial. It is therefore is more easily seen on the frog-leg lateral view rather than the AP hip view. Because the epiphysis moves posteriorly, it appears smaller because of projectional factors.

On the AP, a line drawn up the lateral edge of the femoral neck (line of Klein) fails to intersect the epiphysis during the acute phase (Trethowan sign).

The metaphysis is displaced laterally and therefore may not overlap posterior lip of the acetabulum as it should normally (loss of triangular sign of Capener) .

The metaphyseal blanch sign, a sign seen on AP views, involves increases in the density of the proximal metaphysis. It represents the superposition of the femoral neck and the posteriorly displaced capital epiphysis.

Alignment of the epiphysis with respect to the femoral metaphysis can be used to grade the degree of slippage: see SUFE grading.

Ultrasound may be performed in the assessment of hip pain. However, it should not be used as a replacement for a pelvic radiograph. Findings are nonspecific and may include hip joint effusion. In some cases, malalignment of the femoral epiphysis and metaphysis may be seen.

CT is a sensitive and an accurate method of measuring the degree of upper femoral epiphyseal tilt and detecting the disease in its early stage. Multi-plane reconstruction allows assessment of the relationship of the femoral head to the metaphysis in three planes. However, the dose required for the examination means that it should not be used unless absolutely necessary.

In the acute stage, marrow edema results in an increased signal on T2-weighted sequences, e.g. STIR. Marrow edema is non-specific, and while it may indicate early bone changes in SUFE, there are numerous other causes, e.g. infection or a tumor.

MRI can be used to examine the contralateral hip which is important because of the high incidence of bilateral slip.

Treatment of the contralateral hip is more controversial. Bilateral SUFE is relatively common (~20%) and stabilization of the unstable side can, in fact, precipitate slip on the contralateral side. As such prophylactic pinning is recommended by some .

If a significant deformity is present, then osteotomies and even joint replacement may be required.

When the slip is evident, and no secondary degenerative changes are present, then the diagnosis is usually readily made. Ideally, however, the diagnosis is made early in which case the differential is that of a painful hip and includes: