solitary fibrous tumor of the pleura

This axial CT
image with intravenous contrast reveals what appears to be a posterior mediastinal mass, which was surgically removed and found to be a solitary fibrous tumor of the pleura.
Wikipedia • CC BY-SA 4.0 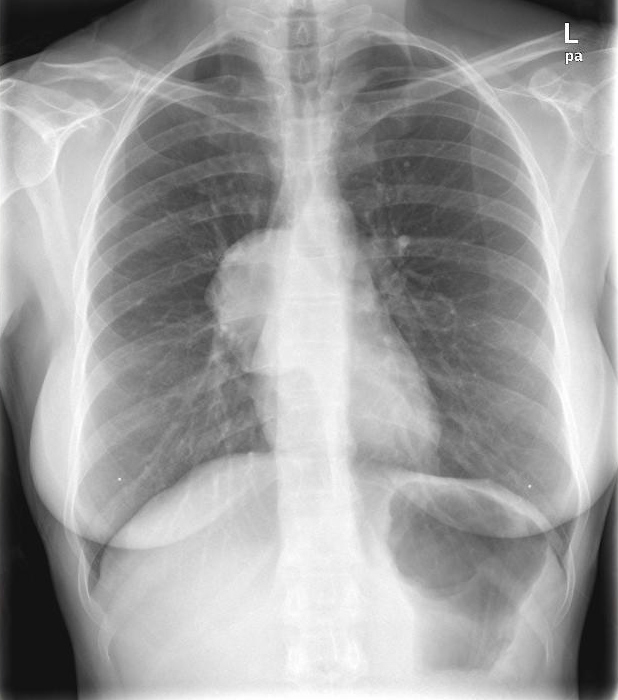 This PA chest
radiograph demonstrates an abnormal contour in the right hilar region, with visualization of the pulmonary vessels through the mass (the hilar overlay sign) indicating its posterior mediastinal location. On resection this was found to be a benign solitary fibrous tumor of the pleura.
Wikipedia • CC BY-SA 4.0
Hallo!
Radiopaedia • CC-by-nc-sa 3.0 • de

Solitary fibrous tumor of the pleura, also known as pleural fibroma, is a rare benign pleural-based tumor that accounts for <5% of all tumors involving the pleura.

Usually presents in the 6 to 7 decades. There is no recognized gender predilection. It has an incidence of 2.8 per 100,000 persons .

Usually asymptomatic and discovered as an incidental finding on a routine chest radiograph . Of those who are symptomatic, the clinical presentation can be with either a cough, chest pain, or shortness of breath.

Asbestos exposure is not an association.

They are composed of irregularly arranged fascicles consisting of spindle cells separated by collagen. Thought to originate from submesothelial mesenchymal cells. Approximately 80% of pleural fibromas arise from the visceral pleura. Myxoid or cystic degeneration can occur.

There may be a predilection towards the mid to lower zones of the chest. In ~80% of cases, they arise from visceral pleura, with the remainder arising from the parietal pleura.

Presents as a pleural-based mass, which tends to be relatively circumscribed, but can also be lobulated. It often forms an obtuse angle with the chest wall and may grow to a large size. Pedunculated lesions can change position and appearance with respiration or with a change in position on serial radiographs.

Tends to have soft tissue attenuation on unenhanced scans and shows relatively homogenous intense background enhancement on contrast-enhanced scans (from rich vascularization). Non-enhancing areas may be present, corresponding to necrosis, myxoid degeneration, or hemorrhage within the tumor. A pedicular attachment may also be seen.

Due to the fibrous component, signal characteristics tend to be:

MR may also show necrotic, hemorrhagic, and cystic components in greater detail if these are present.

The majority of tumors tend to be benign and slow-growing. Malignant tumors are uncommon but have been reported. Surgical resection is the treatment of choice .  There can be a recurrence in a small proportion (8%) of cases, most of which do not recur again following re-excision.

Understanding of primary pleural neoplasia has changed drastically since the late 1800s, and so the associated terminology has also changed. German pathologist Ernst Leberecht Wagner (1829-1888)is generally credited with the first description of pleural mesothelioma / pleural fibroma in 1870, although he described it "tuberkelähnliche" lymphadenome ("tubercle-like" lymphadenoma) . Primary pleural malignancies were rare until the twentieth century when incidence increased considerably due to environmental exposures.

Throughout much of the twentieth century, there was a continual debate about the precise histology of both normal pleura and pleural tumors. The properties of the mesothelial cell itself were controversial, mostly due to its unique expression of both mesenchymal and epithelial attributes.

Considerations for extremely well-defined lesions include:

If not extremely well defined, consider:

Also, consider the differential for a single pleural mass.