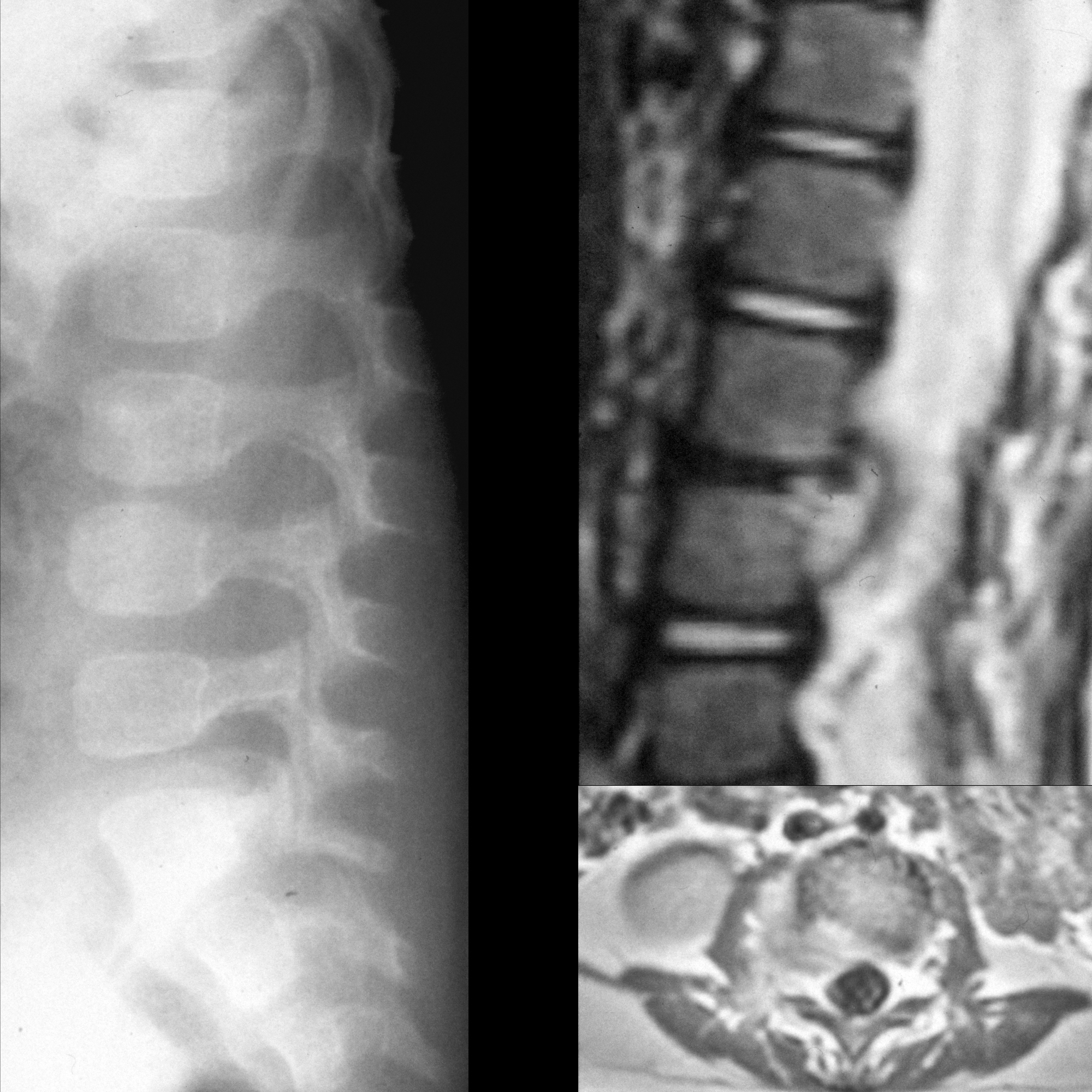 Toddler with
limp who won’t bear weight on right legLateral radiograph of the lumbar spine shows loss of height of the L3-L4 intervertebral disc space. Sagittal T2 MRI of the lumbar spine shows (right top) loss of normal bright signal of the L3-L4 intervertebral disc and an epidural mass just posterior to the L4 vertebral body. Axial T1 MRI with contrast at the L4 level shows the epidural mass to be right sided and to also involve the right psoas muscle.The diagnosis was osteomyelitis / diskitis.
pediatricimaging.org • CC-by-nc-sa 4.0

Spondylodiskitis, (rare plural: spondylodiskitides) also referred to as diskitis-osteomyelitis, is characterized by infection involving the intervertebral disc and adjacent vertebrae.

Spondylodiskitis has a bimodal age distribution, which many authors consider essentially as separate entities:

The typical presentation is back pain (over 90% of patients) and less common fever (under 20% of patients). Patients are often bacteremic from sources such as endocarditis and intravenous drug use.

Plain radiography is insensitive to the early changes of diskitis/osteomyelitis, with normal appearances being maintained for up to 2-4 weeks. Thereafter disc space narrowing and irregularity or ill definition of the vertebral endplates can be seen. In untreated cases, bony sclerosis may begin to appear in 10-12 weeks.

MRI is the imaging modality of choice due to its very high sensitivity and specificity. It is also useful in differentiating between pyogenic, tuberculous, and fungal infections, and a neoplastic process.

The DWI sequence can help to distinguish between the acute and chronic stages of the disease .

A bone scan and white cell (WBC) scan may be used to demonstrate increased uptake at the site of infection, and are more sensitive than plain film and CT, but lack specificity. Not infrequently, a WBC scan demonstrates cold spots, a non-specific finding. The classic appearance on multiphase bone scans is increased blood flow and pool activity and associated increased uptake on the standard delayed static images . Gallium citrate has been used with some success but is hampered by higher dosimetry and inferior imaging characteristics (high effective dose, long half-life time, poor spatial resolution) .

F-FDG PET has been demonstrated to possess high sensitivity in detecting spondylodiskitis. As such, infectious spondylodiskitis can virtually be excluded by a negative scan. Dual imaging with PET/CT may thus become the imaging modality of choice, especially in patients with prior surgery and/or implants, where MRI is contraindicated or hampered by artifact . Specificity is not as high , but monitoring of treatment results is possible .