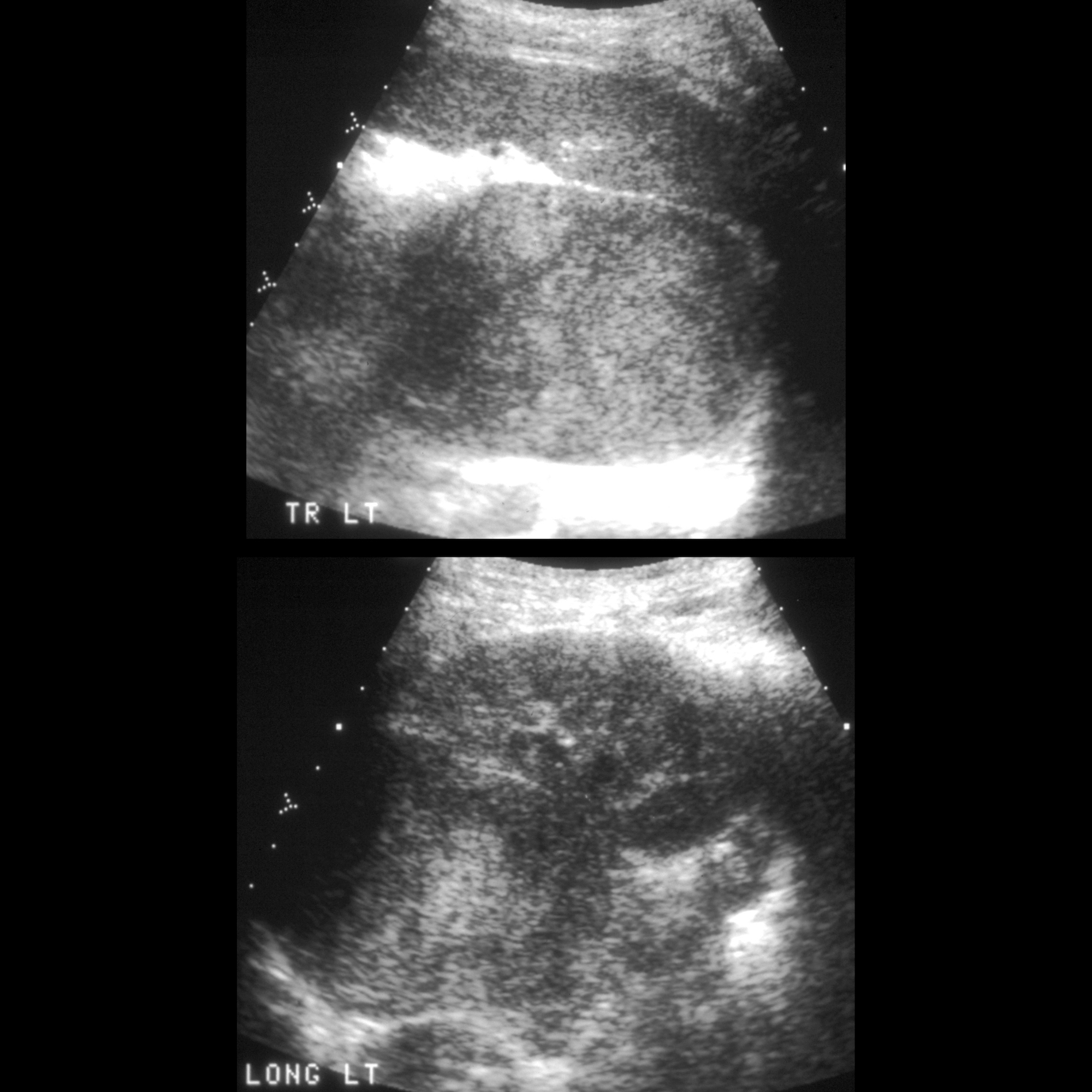 Teen female
with hirsuitism and virilizationTransverse and sagittal US of the left kidney shows a large solid left adrenal mass.The diagnosis was adrenocortical carcinoma.
pediatricimaging.org • CC-by-nc-sa 4.0 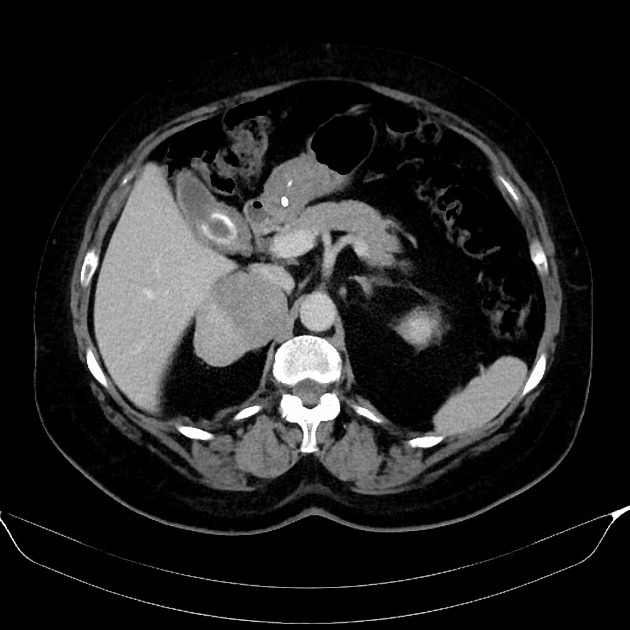 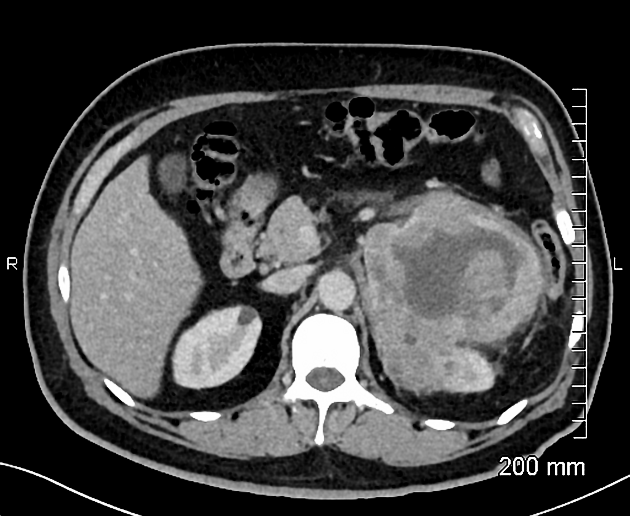 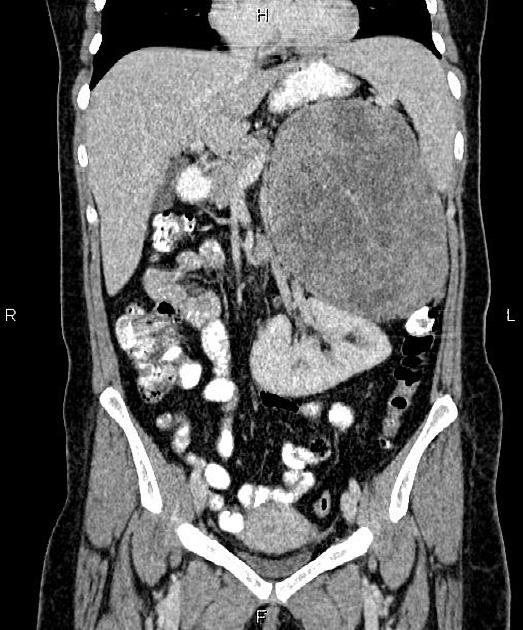 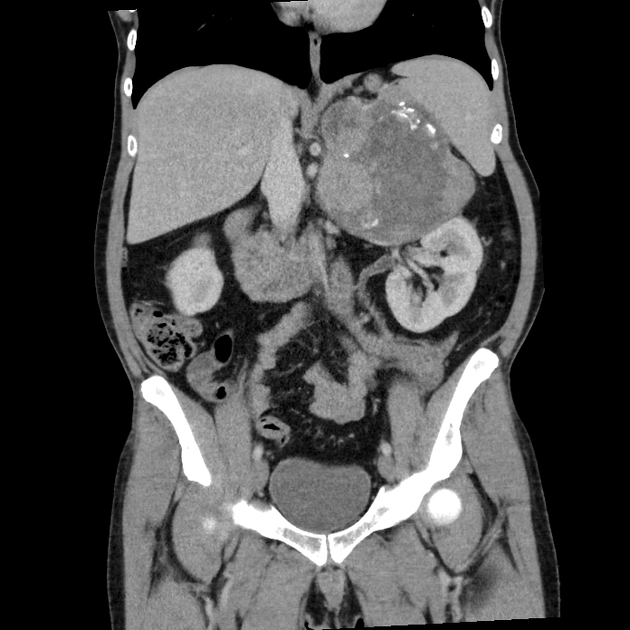 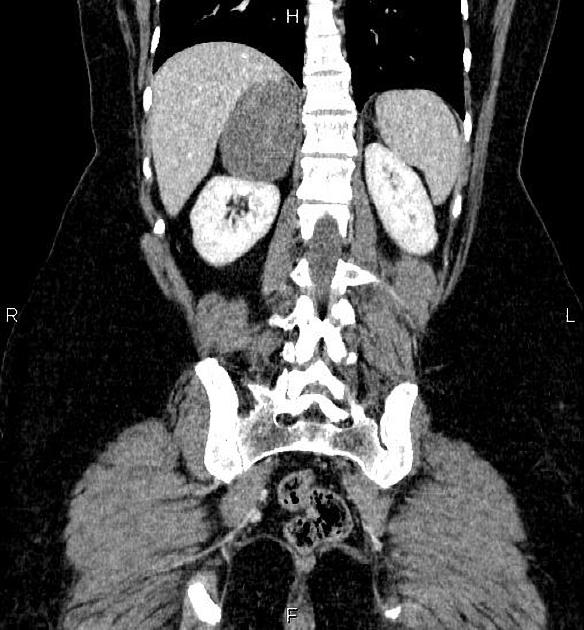 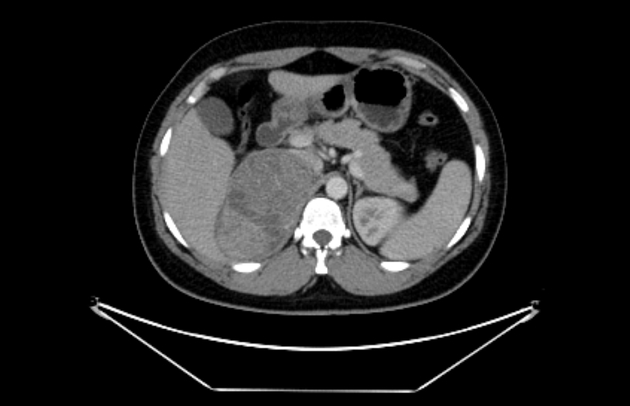 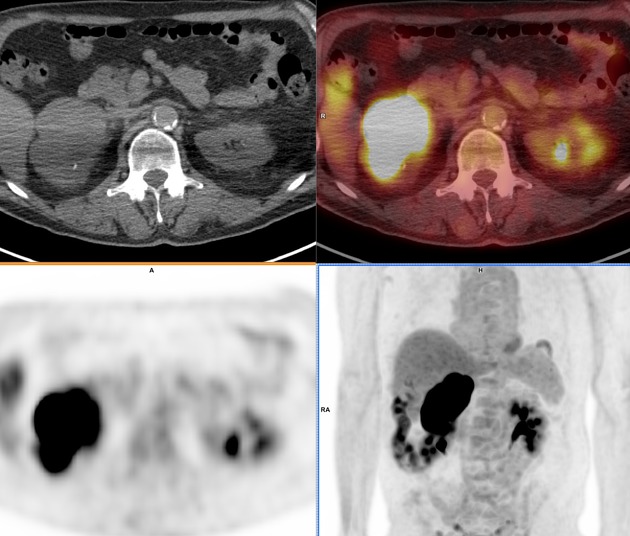 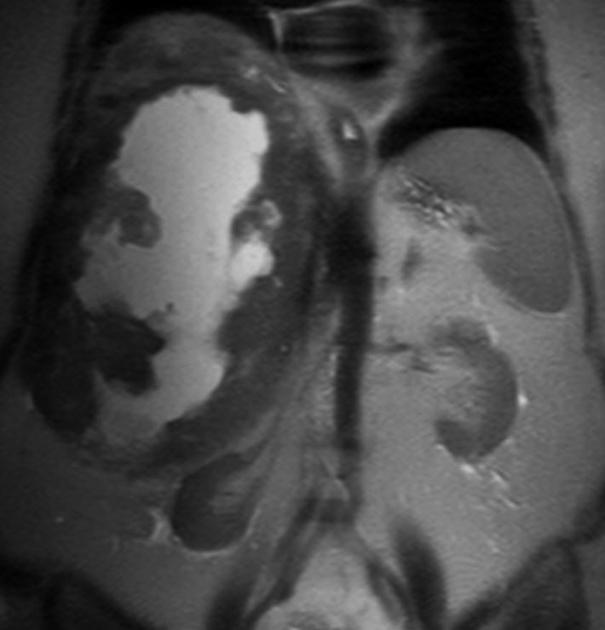 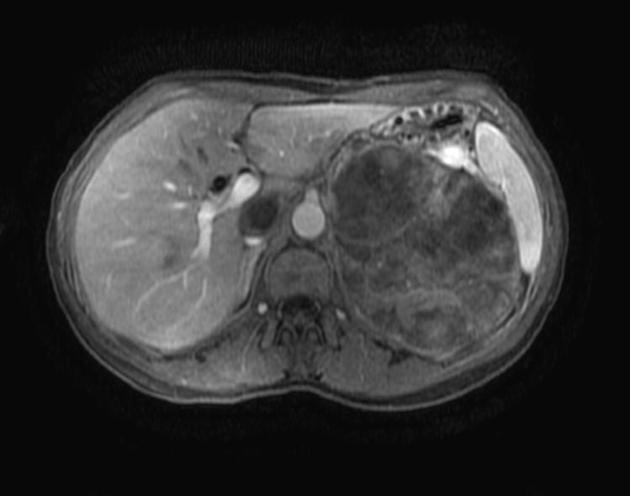 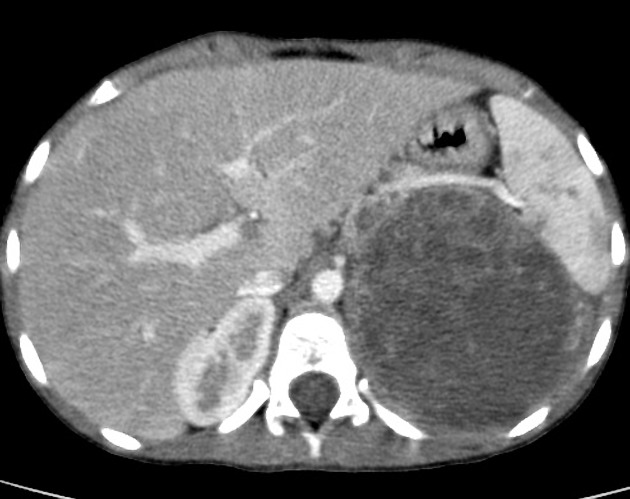 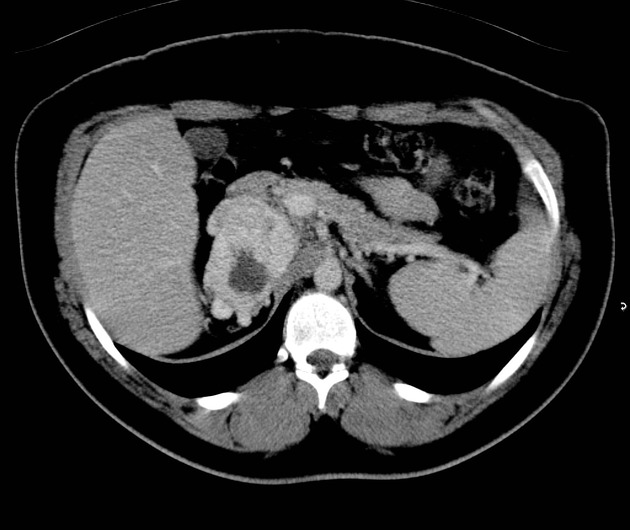 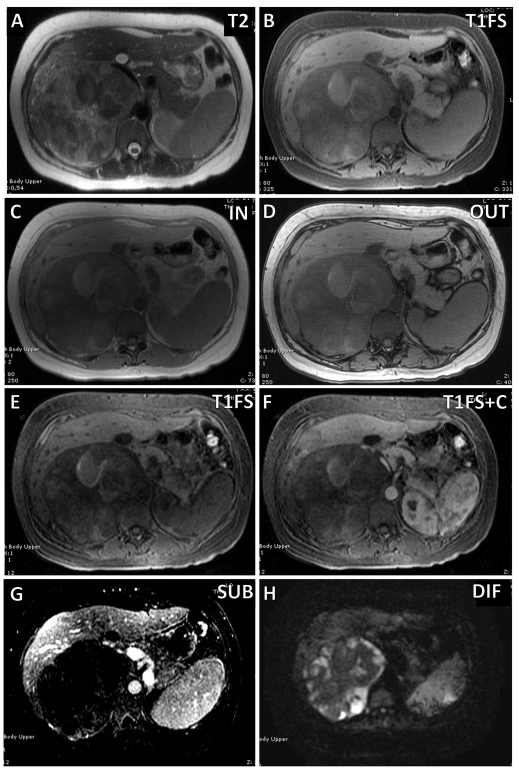 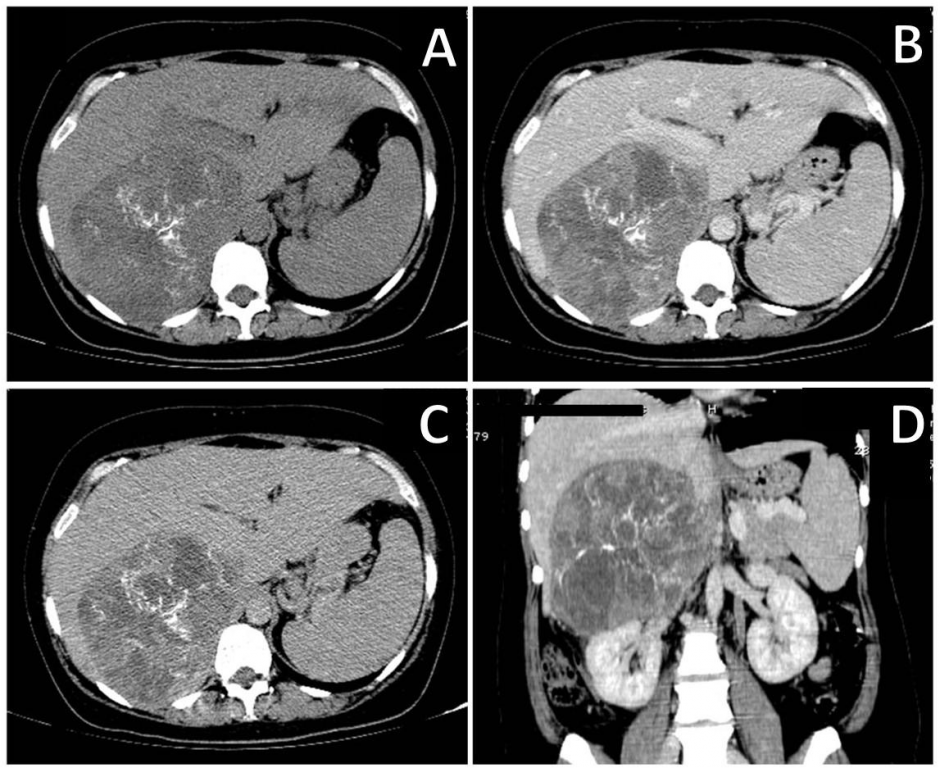 Elevated
right hemidiaphragm. CT shows a large heterogeneous mass centred on the right adrenal gland with central calcifications (A). It poorly enhances on portal-venous-phase and on delayed-phase (B-C). It displaces the liver upwards and the kidney downwards (D).
www.eurorad.org • CC by-nc-sa-4.0 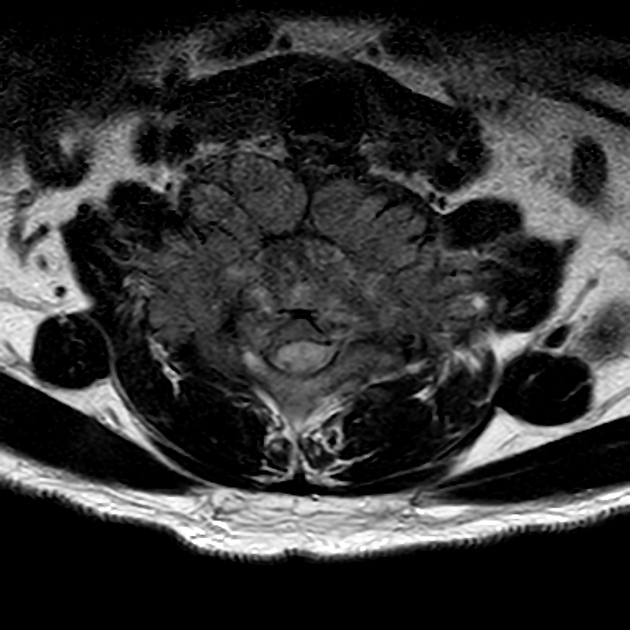 Although men and women are affected equally, functioning tumors are more common in females, who are also more likely to have an associated endocrine syndrome . The median age of presentation is around 50 years, but tumors have been found at all ages .

An additional, but smaller, incidence peak occurs in early childhood. In these cases, tumors are more likely to be functioning .

Often a suprarenal well-defined mass is seen, the appearance of which varies based on the size of the lesion. Smaller lesions are homogenous, whereas larger lesions are heterogeneous secondary to necrosis/hemorrhage.

If the mass is found early, when still small, then it is difficult to distinguish from an adenoma, as aggressive features are often absent .

Focal extension into renal vein, IVC and liver are relatively common, with some series finding renal vein involvement in up to 40% of patients . Metastasis to regional lymph nodes, lung, bones, and liver can occur. Liver metastases tend to be hypervascular.

MRI can be useful to determine hepatic invasion if CT is inconclusive.

Heterogeneous mass is seen that is of high signal on T2 sequences. Areas of hemorrhage may result in variable signal intensity dependent on the age of the hemorrhage.  Heterogeneous enhancement is seen with administration of gadolinium .

Arteriography may be performed in patients who present with a large mass for which the organ of origin cannot be determined . Selective catheterization can identify the primary vascular supply, and thus help distinguish adrenal from renal tumors.

Ideally, treatment is with surgical excision, however, in many instances, the disease is advanced at the time of diagnosis, in which case chemotherapy (Mitotane) and radiation may be given for palliation.

In general, males have a poorer prognosis, largely because they are less likely to have functioning tumors, and thus present later, with more advanced disease .

For an adrenal mass consider other adrenal lesions :