SPECT of the
upper abdomen with MIBG. Pheochromocytoma of the left adrenal gland.
Wikipedia • CC BY-SA 3.0 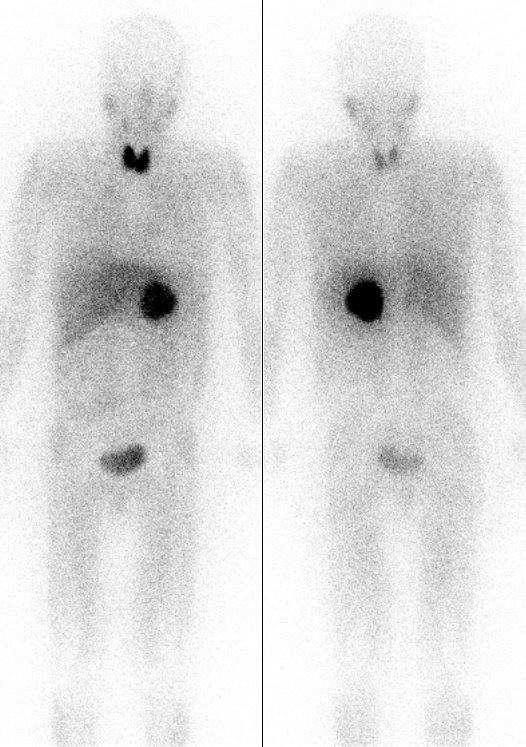 Body
scintigraphy 24 hours after intravenous administration of 123Iod-MIBG. Physiological occupancy of the thyroid, liver and bladder. Pathological accumulation in a tumor of the left adrenal glands (pheochromocytoma). Left: from the front. Right: from behind.
Wikipedia • CC BY-SA 3.0 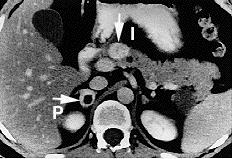 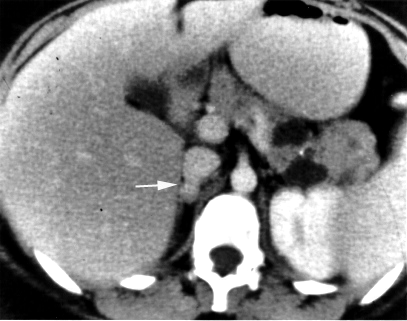 Pheochromocytomas are an uncommon tumor of the adrenal gland, with characteristic clinical, and to a lesser degree, imaging features. The tumors are said to follow a 10% rule:

The estimated prevalence of pheochromocytomas in hypertensive adults is thought to range from 0.1 to 0.6%. The incidence in the general population is believed to be around 0.05% based on autopsy series.

The majority of cases are sporadic. In 5-10% of cases, a pheochromocytoma is a manifestation of an underlying condition including :

It is a rare but classical cause of uncontrolled secondary hypertension, with a minority having superimposed paroxysmal hypertensive crises . Patients may also present with cardiac dysfunction (myocardial infarction, pulmonary edema) or neurological events (a severe headache, visual disturbance, hemorrhagic strokes) .

The first investigation in cases where pheochromocytoma is suspected is usually urinary catecholamines. When those results are positive, then imaging is performed to try and localize the tumor or tumors.

Pheochromocytomas are a type of paraganglioma. They are catecholamine-secreting tumors derived from chromaffin cells. They typically demonstrate a nesting (Zellballen) pattern on microscopy. This pattern is composed of well-defined clusters of tumor cells containing eosinophilic cytoplasm separated by a fibrovascular stroma. Various pathological scoring systems are in use (PASS, GAPP) to predict differentiation and likelihood of metastasis .

They most frequently arise from the chromaffin cells of the adrenal medulla.

Approximately 10% of all pheochromocytomas are not located in the adrenal glands. Extra-adrenal tumors are more likely to be malignant and metastasize .

They can be found along the sympathetic chain as well as in the urinary bladder and organ of Zuckerkandl. Thoracic paragangliomas are rare and only account for 1-2% of all cases of pheochromocytoma.

It is also important to note that it is not possible to distinguish malignant from benign pheochromocytomas merely on the direct appearance of the mass. Rather, the distinction is made on demonstrating evidence of direct tumor invasion into adjacent organs/structures or the presence of metastases .

Pheochromocytomas can have a variable appearance ranging from solid to mixed cystic and solid to cystic .

CT is the first imaging modality to be used, with an overall sensitivity of 89%. This is on account of 98% of tumors being located within the abdomen and 90% limited to the adrenal glands .

It should be noted that suspected cases of pheochromocytomas have been historically managed as a contraindication for iodinated contrast administration, as it could theoretically precipitate a hypertensive crisis. However, studies have shown no evidence to support this theory and nowadays most radiology non-ionic iodinated contrast media guidelines do not put pheochromocytomas as a contraindication .

MRI is the most sensitive modality for identification of pheochromocytomas and is particularly useful in cases of extra-adrenal location. The overall sensitivity is said to be 98% .

Some agents can be used to attempt to image pheochromocytomas, and are especially useful in trying to locate an extra-adrenal tumor (when CT of the abdomen is negative) or metastatic deposits. Unfortunately, these agents are not very specific for pheochromocytomas and have a limited spatial resolution, usually requiring the tumor to be >1 cm in diameter.

Over 70% of tumors express somatostatin receptors. Imaging is obtained 4 hours (+/- 24/48 hours) after an intravenous infusion. Unfortunately, the kidney also has somatostatin receptors, as do areas of inflammation, mammary glands, liver, spleen, bowel, gallbladder, thyroid gland and salivary glands. As such interpretation can be difficult .

Octreotide is usually labeled with either In-DTPA (Octreoscan) or (less commonly) I-Tyr3-DTPA .

I-123 MIBG uptake in an adrenal nodule is strong supporting evidence for a pheochromocytoma. Overall sensitivity is approximately 80% . However, as many neuroendocrine tumors demonstrate uptake with MIBG, it is not as specific for pheochromocytoma outside of the adrenal.

18F-Dopa PET is thought to be highly sensitive according to initial results . Galium-68 DOTATATE PET/CT imaging has also been advocated due to their higher lesion to background tissue contrast and high specificity for pheochromocytoma .

Definitive treatment is surgical, and if complete resection is achieved, without metastases, then surgery is curative, and hypertension usually resolves.

Preoperative medical management is essential in reducing the risk of intraoperative hypertensive crises and typically consists of the non-competitive alpha-adrenergic blockade (e.g. phenoxybenzamine). Later, but never before 7-10 days of alpha blockade, a beta-blocker may need to be added to control tachycardia or some arrhythmias .

Metastases from malignant pheochromocytomas are typical to the lung, bone and liver .

When located in the adrenal gland, the differential is essentially that of an adrenal tumor and includes:

In large tumors, especially if malignant, differentiating them from renal cell carcinomas can be difficult, especially on CT images.