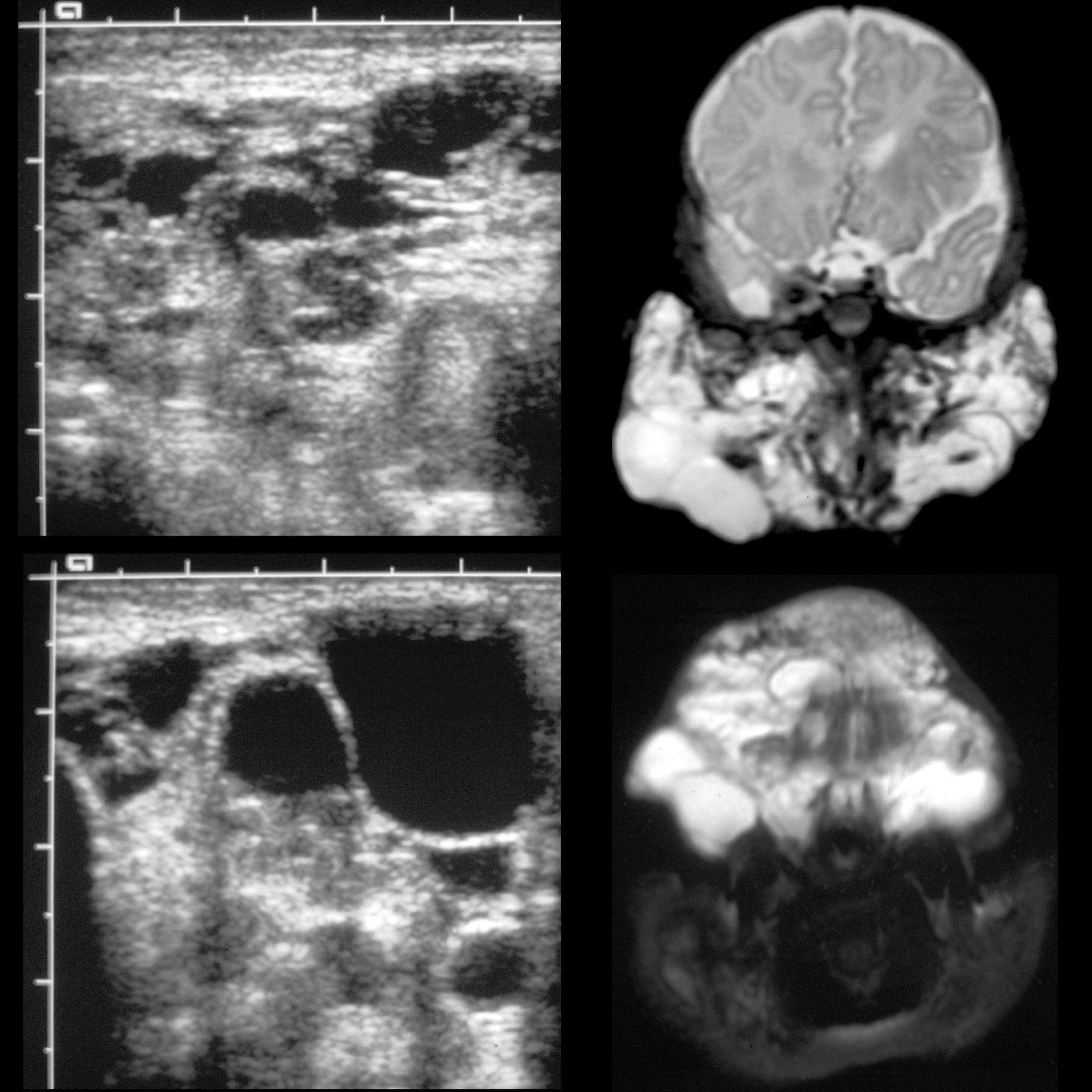 Newborn with
prenatal diagnosis of neck mass who was delivered via an EX utero Intrapartum Treatment (EXIT) procedureTransverse (above) and sagittal (below) US of the neck and coronal (above) and axial T2 MRI without contrast of the neck shows an infiltrating multicystic mass of the neck surrounding the trachea that has minimal vascularity.The diagnosis was lymphatic malformation.
pediatricimaging.org • CC-by-nc-sa 4.0 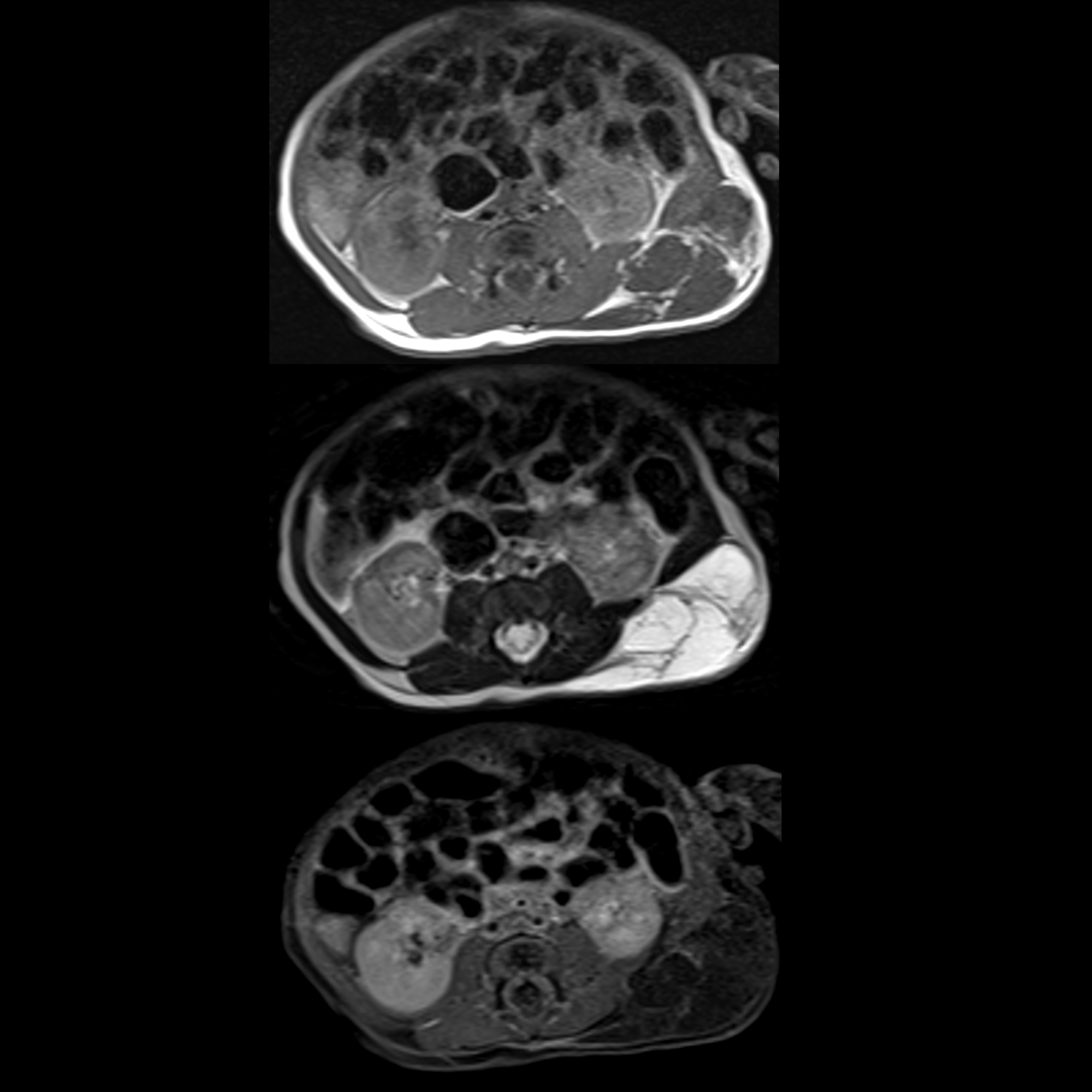 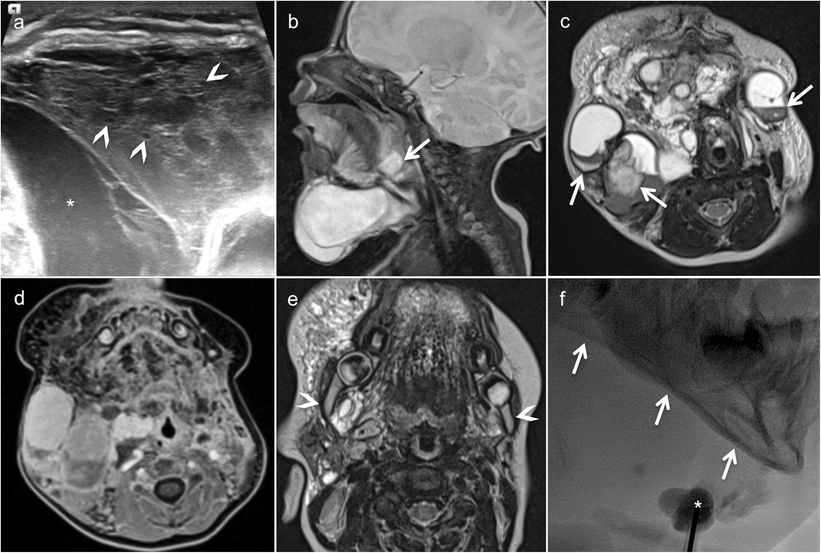 Masses of
developmental and genetic origin affecting the paediatric craniofacial skeleton. Lymphatic malformation (LM) in a term-born-boy presenting with a large anterior and lateral neck mass beneath a bluish-coloured skin. a Ultrasound of the neck shows that the mass is composed of large fluid-filled macrocystic (asterisk) and microcystic (arrowheads) portions. b Sagittal T2 illustrates the macrocystic submental component extending into the base of the tongue (arrow). Percutaneous sclerotherapy was carried out. Post-sclerotherapy follow-up MRI (c, d). c Axial T2 depicts intracystic fluid/fluid levels due to internal bleeding (arrows). Fat-saturated, contrast-enhanced T1 (d) shows enhancement of the thin septae of the macrocystic and microcystic components. Two years later, the mandibular deformation is visible on the follow-up MRI (T2W image, e, arrowheads) and on an x-ray image (f, arrows), obtained during percutaneous sclerotherapy (asterisk)
insightsimaging.springeropen.com • Open Access

Thyroglossal
duct pathology and mimics. Lymphangioma. a Axial contrast-enhanced CT image demonstrates a non-enhancing multilocular, trans-spatial fluid-attenuation mass centered in the left neck base with mass effect and rightward displacement of trachea and esophagus. Note the fluid-fluid levels indicative of prior hemorrhage (arrow), distinguishing this lesion from a thyroglossal duct cyst. b Axial T2-weighted MR image in a different patient demonstrates a trans-spatial multiseptated cystic mass extending from the right lateral infrahyoid neck across the anterior aspect of the thyroid cartilage
insightsimaging.springeropen.com • CC-by-4.0 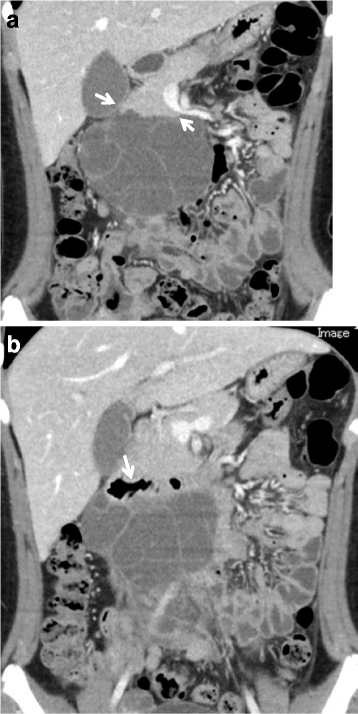 A large
retroperitoneal lymphatic malformation successfully treated with traditional Japanese Kampo medicine in combination with surgery. Contrast CT revealed a well-circumscribed multicystic mass measuring 9.5 × 5.8 × 10.0 cm in the retroperitoneal region. The mass, filled with serous fluid without hemorrhage or abscess, was suspected to adhering and stretching the pancreas head (a, arrow: pancreas head) by the beak sign. The tumor was suspected to adhering the duodenum (b, arrow: duodenum)
surgicalcasereports.springeropen.com • CC-by-4.0 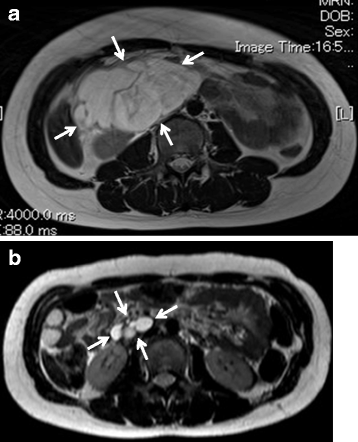 This article focuses on the general features of lymphatic malformations. For a specific discussion in other locations, please refer to:

These malformations were formerly called lymphangiomas. This expression is out-of-date according to the 2018 ISSVA classification .

They can present at any age but most often occur in the pediatric population (~90% in those less than 2 years old ). The worldwide incidence of lymphangiomas is 1:6000-16000 live births. Males and females are equally affected.

Generally, the presentation may be with symptoms related to local mass effect and/or hemorrhage.

For example, a lymphatic malformation within the orbit may present with progressive proptosis with acute deterioration in symptoms, the mass effect resulting in compressive optic neuropathy, diplopia/ocular muscle weakness, and orbital bruising.

The clinical examination may reveal soft, non-tender masses on palpation with a doughy consistency.

Typically comprised of thin-walled cystic masses and can be classified according to the size of the cystic lesions :

They can occur at almost any location:

Lymphatic malformations may cross more than one compartment. For instance, in the head and neck region, larger lesions tend to occupy more than one deep space, sandwiching between normal structures.

Most lymphatic malformations appear homogeneous and cystic on CT, but some appear inhomogeneous because of the presence of proteinaceous, fluid, blood, or fat components within the lesion. It is rare for CT to demonstrate intrinsic septations. There is only minimal or no displacement/compression of adjacent structures.

Fluid-fluid levels may be seen if complicated by hemorrhage. Signal characteristics include:

Differentials will depend on which compartment or viscera is considered. Possible imaging differential considerations include: