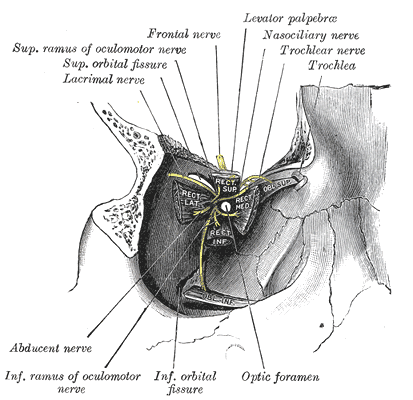 The orbit is a feature of the face and contains the globe and its supporting structures, as well as many nerves and vessels.

In the adult, the orbit has a volume of approximately 30 mL, of which the globe occupies 6.5 mL. It has a roof, floor, medial and lateral wall. The orbit is open anteriorly where it is bound by the orbital septum, which forms part of the eyelids. Posteriorly, the orbit angles inward such that their apices communicate with the intracranial compartment via the optic canal and superior orbital fissure.

The bony margins of the orbits, known as the bony orbit, are composed of seven bones:

The four bones of the medial wall are remembered with this mnemonic.

The orbit is divided by the musculofascial cone into 2 separate compartments:

The orbit communicates posteriorly with the intracranial cavity via the optic canal, through which the optic nerve and ophthalmic artery is transmitted. Immediately inferolateral to the optic canal is the superior orbital fissure, through which most neurovascular structures pass. The infratemporal fossa is accessed via the inferior orbital fissure, which is in direct continuation with the infraorbital foramen, through which the infraorbital nerve exits to supply the skin below the eye (and where it is often damaged by a blow-out fracture).

Nerves of the orbit

There are many nerves within the orbit: see orbital nerve supply.

Stability of the globe

The fascial sheath of the eye (Tenon's fascia), orbital fat, obliques and bony attachment of the recti provide stability to the eyeball within the orbit and prevent it from sinking or retracting. See article titled 'stability of the eye'.

The fascial sheath of the eye (Tenon's fascia) prevents the eye from sinking. The fascia is applied like a bursa to the back of the eye, from the corneoscleral junction to the attachment of the optic nerve and is thickened over the extraocular muscles.

The eye does not rest on the orbital floor but is held up (in fact, closer to the roof) by the suspensory ligament. As a result, the whole maxilla can be removed with the medial orbital wall up to the marginal tubercle without descent of the eye. Above this level removal of bone destroys the attachment of the suspensory ligament, hence the eye sinks down, and diplopia results.

The eyes always rotate about a fixed center, which is its own geometrical center. The contracting recti muscles do not displace the eye posteriorly due to: