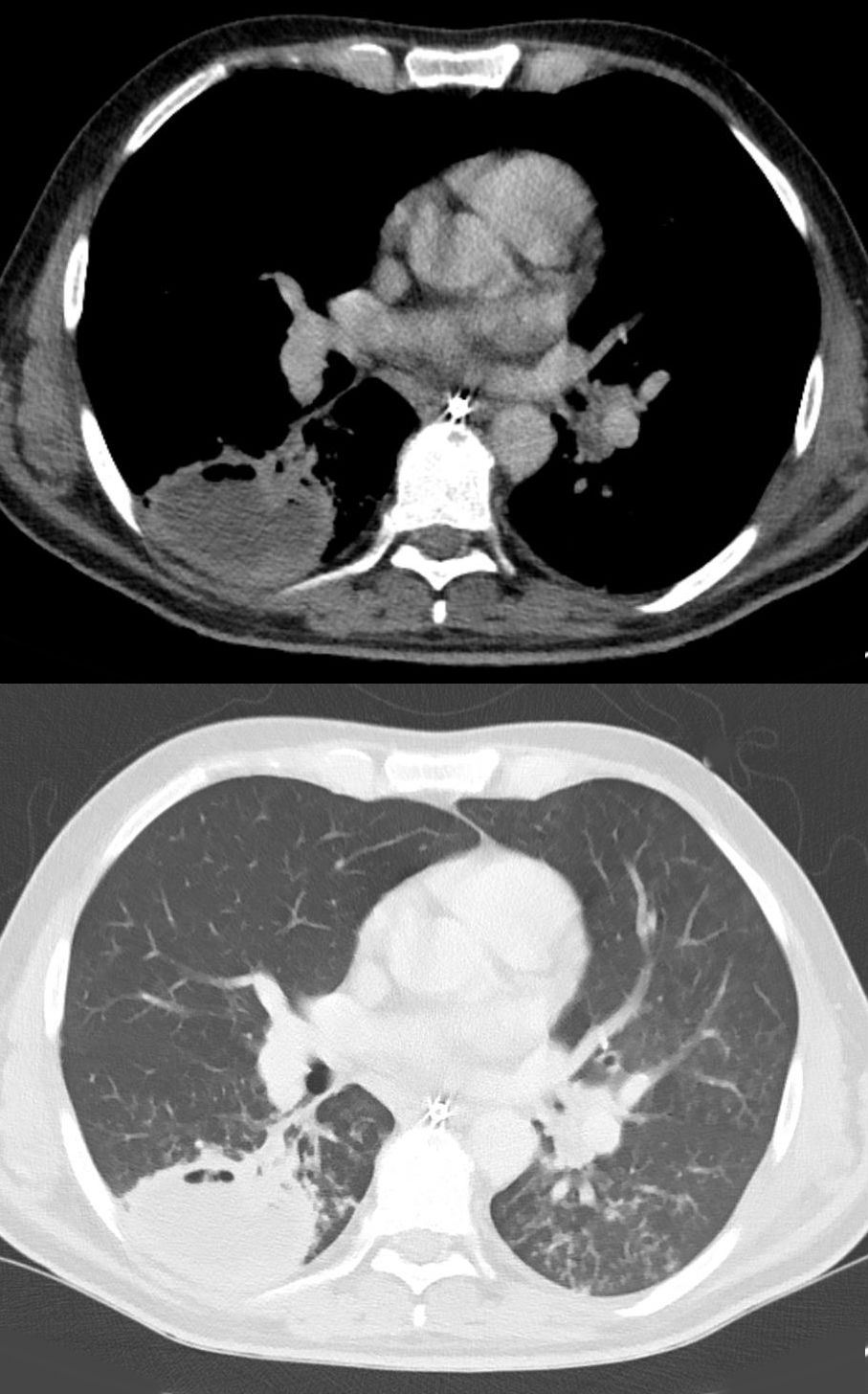 School ager
with fever and coughCXR shows a round cavitary lesion with an air-fluid level in the left upper lobe.The diagnosis was cystic fibrosis with bacterial pneumonia due to Staphylococcus with a lung abscess.
pediatricimaging.org • CC-by-nc-sa 4.0
Hallo!
Radiopaedia • CC-by-nc-sa 3.0 • de

Lung abscesses are circumscribed collections of pus within the lungs. They are often complicated to manage and difficult to treat and, in some cases, may be life-threatening.

As a result of the widespread availability of antibiotics, the incidence of lung abscesses has been dramatically reduced. Similarly, mortality has been reduced. The elderly, immunocompromised, malnourished, debilitated, and, of course, those who do not have access to antibiotics are particularly susceptible and have the worst prognosis . Particularly due to an increased number of immunocompromised (secondary to HIV/AIDS and iatrogenic immunosuppression) the rate has once more increased .

Lung abscesses are divided according to their duration into acute (<6 weeks) and chronic (>6 weeks) . The presentation is usually non-specific and generally similar to a non-cavitating chest infection. Symptoms include fever, cough and shortness of breath. Peripheral abscesses may also cause pleuritic chest pain .

If chronic, symptoms are more indolent and include weight loss and constitutional symptoms. In some cases, erosion into a bronchial vessel may result in a sudden and potentially life-threatening massive hemoptysis.

It is convenient to divide lung abscesses into primary and secondary as they differ not only in etiology, but also microbiology and prognosis.

A primary abscess is one which develops as a result of primary infection of the lung. They most commonly arise from aspiration, necrotizing pneumonia or chronic pneumonia, e.g. in the setting of pulmonary tuberculosis  or immunodeficiency.

In patients who develop abscesses as a result of aspiration, mixed infections are most common, including anaerobes.

Some organisms are particularly prone to causing significant necrotizing pneumonia resulting in cavitation and abscess formation. These include :

In immunocompromised patients additional organisms may also be implicated including :

A secondary abscess is one which develops as a result of another condition. Examples include:

The colonization of pre-existing cavities with organisms is also sometimes grouped with secondary abscesses .

The classical appearance of a pulmonary abscess is a cavity containing a gas-fluid level. In general, abscesses are round in shape and appear similar in both frontal and lateral projections. Additionally, all margins are equally well seen, although adjacent consolidation may make the assessment of this difficult. These features are helpful in distinguishing a pulmonary abscess from an empyema (see empyema vs pulmonary abscess).

Ultrasound does not play a routine role in the assessment of lung abscesses as any aerated intervening lung will prevent visualization. Peripheral abscesses abutting the pleura or with only compressed or consolidated lung may, however, be visible, and should not be mistaken for an empyema . The consolidated lung may mimic a fluid collection with low-level echoes.

CT is the most sensitive and specific imaging modality to diagnose a lung abscess. Contrast should be administered, as this enables the identification of the abscess margins, which can otherwise blend with surrounding consolidated lung.

Abscesses vary in size and are generally rounded in shape. They may contain only fluid or have a gas-fluid level. Typically there is surrounding consolidation, although with treatment the cavity will persist longer than consolidation.

The wall of the abscess is typically thick and the luminal surface irregular.

Bronchial vessels and bronchi can be traced as far as the wall of the abscess, whereupon they are truncated.

Lung abscesses are usually managed with prolonged antibiotics and physiotherapy with postural drainage . Bronchoscopy may be beneficial in establishing bronchial patency to improve drainage . In cases that are refractory to conservative management or those complicated by hemoptysis, empyema or suspected malignancy, surgical resection is the 'traditional' definitive treatment . Percutaneous drainage under CT guidance has also been advocated in selected cases (e.g. patients refractory to conventional therapy) .

Conservative treatment is less likely to be successful in the case of larger abscesses (>4 cm in diameter). These have a higher mortality rate irrespective of treatment .

Complications of surgery or percutaneous drainage include :

Despite treatment, abscesses continue to have high mortality (15-20%) . This is particularly the case in nosocomial infections, which account for the majority of deaths, presumably due to the combined effect of pre-existent illness and the higher prevalence of virulent antibiotic-resistant strains, particularly P. aeruginosa (mortality rate of 83%), S. aureus (50%) and Klebsiella pneumoniae (44%) .

Other considerations on plain film include