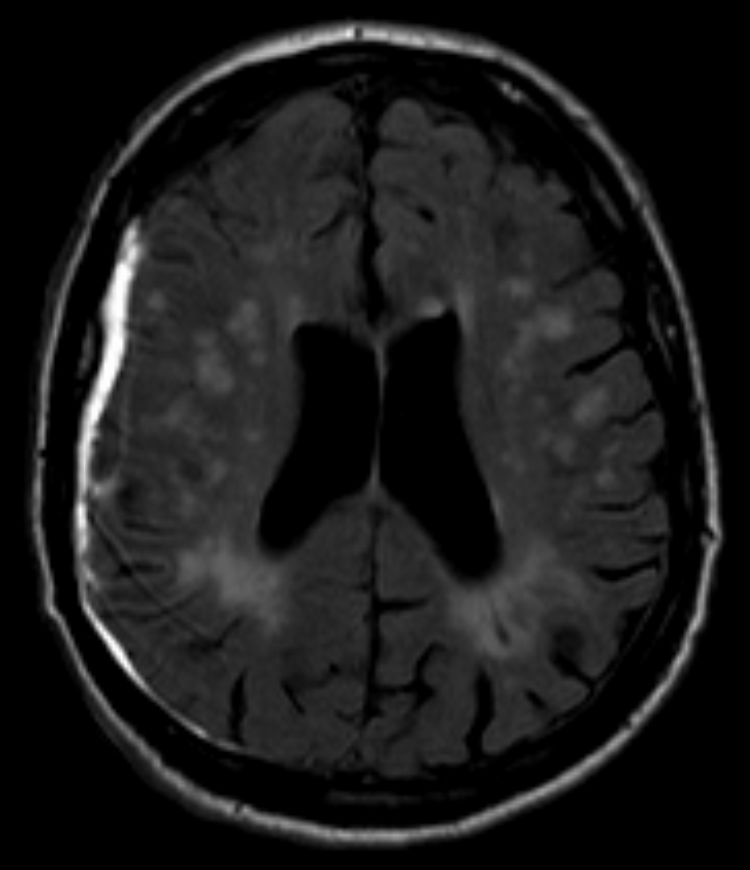 Subdural hemorrhage (SDH) (also commonly called a subdural hematoma) is a collection of blood accumulating in the subdural space, the potential space between the dura and arachnoid mater of the meninges around the brain. SDH can happen in any age group, is mainly due to head trauma and CT scans are usually sufficient to make the diagnosis. Prognosis varies widely depending on the size and chronicity of the hemorrhage.

Subdural hematomas, most frequently due to trauma, are seen in all age-groups although etiology will vary :

In addition to trauma, there are numerous other far less common causes:

Acute subdural hemorrhages usually present in the setting of head trauma. This is especially the case in young patients, where they commonly co-exist with cerebral contusions.

Most patients (65-80%) present with a severely depressed conscious state and pupillary abnormalities are seen in ~40% (range 30-50%) of cases .

Clinical presentation of subacute/chronic subdural in the elderly is often vague and is one of the classic causes of pseudodementia. A history of head trauma is often absent or very minor.

See the article: EDH vs SDH

Subdural hemorrhages are believed to be due to stretching and tearing of bridging cortical veins as they cross the subdural space to drain into an adjacent dural sinus. These veins rupture due to shearing forces when there is a sudden change in the velocity of the head. The arachnoid may also be torn, creating a mixture of blood and CSF in the subdural space.

10 to 30% of chronic subdural hematomas show evidence of repeated hemorrhage. Rebleeding usually occurs from the rupture of stretched cortical veins as they cross the enlarged fluid-filled subdural space or from the vascularized neomembrane on the outer (calvarial) side of the fluid collection.

Some controversy, albeit of academic interest only, exists as to the exact location of a subdural hematoma. Classical teaching is that it is located in the potential space between the arachnoid layer and inner layer of the dura; however, no such space really exists. Rather the arachnoid-dura junction is composed of "avascular tissue with flake-like [...] cells stacked in several layers with narrow intercellular clefts" . Bleeding occurs within this multicellular layer, with these cells located on both sides of the hematoma . This possibly accounts for why some acute hematomas appear to have multiple compartments, usually ascribed to intermittent bleeding.

In the vast majority of cases, CT scans are sufficient to make the diagnosis and manage these patients. Contrast is sometimes helpful if there is the concern of subdural empyema, of the presence of a small isodense subdural, or to try and distinguish enlargement of the extra-axial CSF space from a chronic subdural hematoma. Routine use of intermediate (subdural) windows in all imaging planes is highly recommended to detect discrete subdural bleeds that blend in with the adjacent calvarium due to blooming in standard brain window images .

The appearance of SDHs on CT varies with clot age and organization.

In most instances, patients are not imaged in the hyperacute phase (first hour or so), but on occasion when this is performed they appear relatively isodense to the adjacent cortex, with a swirled appearance due to a mixture of the clot, serum and ongoing unclotted blood . There is often a degree of underlying cerebral swelling (especially in young patients where head trauma is often more severe) which accentuates the mass-effect created by the collection .

The classic appearance of an acute subdural hematoma is a crescent-shaped homogeneously hyperdense extra-axial collection that spreads diffusely over the affected hemisphere.  As the clot starts to retract the density increases typically to >50-60 HU and is thus hyperdense relative to the cortex .

Up to 40% of SDHs have mixed hyper- or hypodense areas that reflect unclotted blood, serum extruded during clot retraction, or CSF within the subdural hematoma due to an arachnoid laceration.

Rarely, acute SDHs may be nearly isodense with the adjacent cerebral cortex. This occurs with anticoagulation, coagulopathies, or severe anemia when the hemoglobin concentration drops to 8 to 10 g/dL. Patients with deficient coagulation can also demonstrate a hematocrit fluid-fluid level as the blood does not form a clot and red cells have time to drift dependently .

In patients with underlying low hemoglobin and platelet conditions such as sickle cell anemia, acute subdural hemorrhage may be hypodense even in the acute phase.

As the clot ages and protein degradation occurs, the density starts to drop. At some point between 3 and 21 days (typically 10-14 days), the density will drop to ~ 35-40 HU and become isodense to the adjacent cortex, making identification potentially tricky, especially if subdural collections are bilateral . Contrast-enhanced CT is often useful in this instance if MRI is unavailable. The key to identification is visualizing a number of indirect signs, including:

By definition, it is at least 3 weeks old.

The subdural collection becomes hypodense and can reach ~0 HU and be isodense to CSF, and mimic a subdural hygroma.

A crescentic shape may change to a biconvex one.

Rarely, the periphery of the SDH may calcify, see calcified chronic subdural hematoma for an in-depth discussion regarding the CT appearance of this entity.

Rarely, the periphery of the SDH may calcify, see calcified chronic subdural hematoma for an in-depth discussion regarding the MRI signal characteristics of this entity.

Treatment depends primarily on the amount of mass-effect and neurological impairment caused by the collection, and thus correlates with the size of the subdural hemorrhage.

Small collections – so-called 'smear subdurals' – especially those which are chronic and are not causing symptoms can be observed with serial CT scans.

Symptomatic collections need to be surgically evacuated. In the acute setting, this should be performed rapidly (within 4 hours) and usually requires a craniotomy as the clot is not easily evacuated via burr holes.

Care must be taken to evaluate whether the resultant subfalcine herniation (if there is any) is in proportion with the extent of the hematoma on imaging. If the difference between the width of the hematoma and the midline shift exceeds 3 mm it signals a significant concurrent cerebral edema, carrying a dismal prognosis. These patients require early aggressive treatment against cerebral swelling .

Symptomatic subacute/chronic subdural hematomas are often treated via one or more burr holes as the blood clot has liquefied and can be washed out more easily. The compressed brain can take some time to re-expand, and subdural collections may re-accumulate.

Although subdural hematomas are often thought of as relatively benign entities it should be noted that the mortality in acute subdural hematomas requiring surgery is very high (50-90%), particularly in patients who are anticoagulated, and that only 20% fully recover .