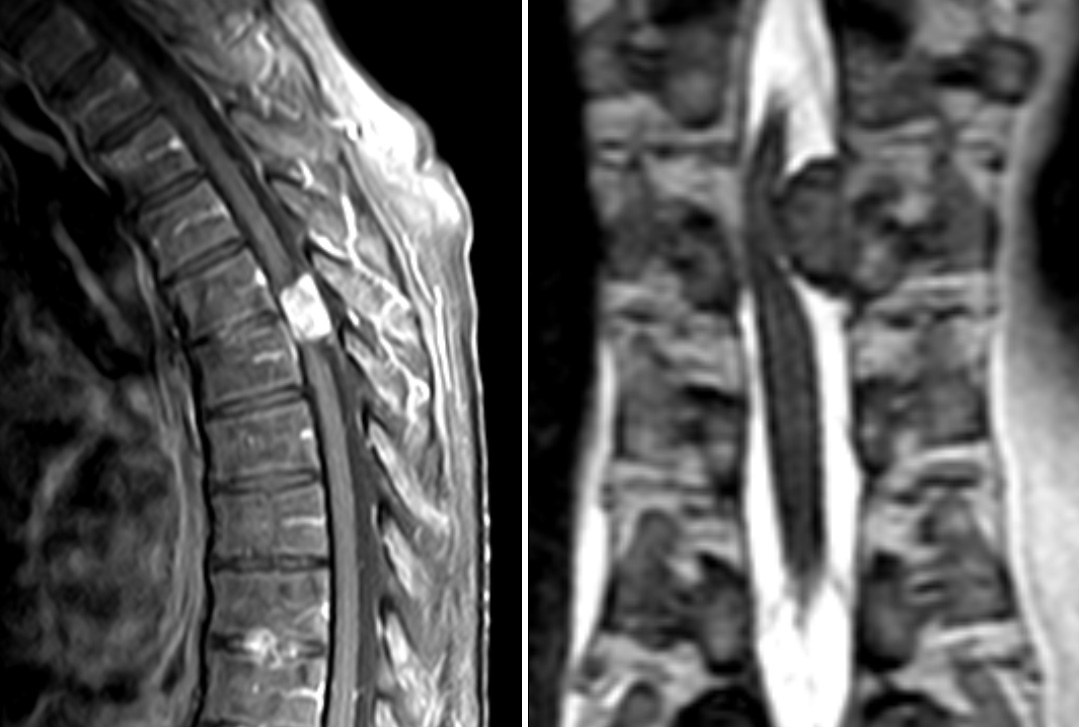 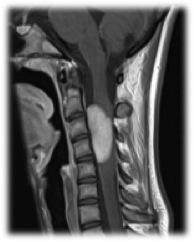 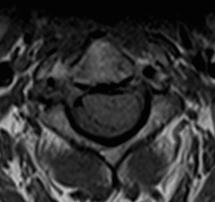 Cervical
intradural meningioma presenting as Brown-Séquard syndrome. Axial T1 at the level of C2, showing an intradural extramedullary mass occupying most of the canal and displacing the spinal cord posteriorly and to the right.
www.eurorad.org • CC by-nc-sa-4.0 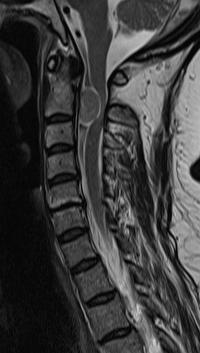 Cervical
intradural meningioma presenting as Brown-Séquard syndrome. Axial T2WI at the level of C2, showing the intradural extramedullary mass anteriorly, displacing the cord posteriorly and to the right. It has a slight hyperintense signal intensity when compared to the cord parenchyma.
www.eurorad.org • CC by-nc-sa-4.0 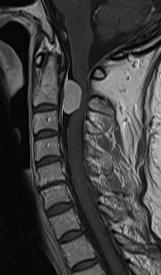 Cervical
intradural meningioma presenting as Brown-Séquard syndrome. Midsagittal T1WI. Homogeneous enhancement after iv gadolinium administration. Notice the dural tail in the anterior aspect of the dura, adjacent to the mass. There is no cord enhancement.
www.eurorad.org • CC by-nc-sa-4.0 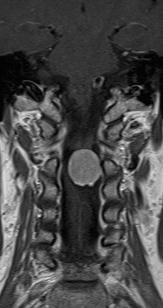 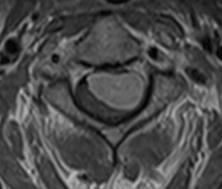 Meningiomas arising from the coverings of the spinal cord are one of the two most common intradural extramedullary spinal tumors, representing 25-30% of all such tumors .

Spinal meningiomas represent a minority of all meningiomas (approximately 12%) . They have a peak incidence in the sixth through eighth decades .

The best recognized environmental risk factor is exposure to high dose ionizing radiation, especially in childhood . Prior trauma is another risk factor .

There is an increased incidence of spinal meningiomas in patients with neurofibromatosis type 2 (NF2). In fact, in the pediatric population, meningiomas uncommonly occur outside of the setting of NF2.

Despite usually being small, due to the confines of the spinal canal, spinal meningiomas can result in significant neurologic dysfunction. The majority of patients present with motor deficits as a result of compression of the spinal cord. Less common presentations include sensory deficits, pain and sphincter dysfunction.

Most spinal meningiomas are benign, with 70-90% being classified as WHO grade I lesions . Less common are tumors with more aggressive features consistent with WHO grade II (5-25%) or grade III (1-5%).

There are many histomorphometric variants of meningioma recognized in the WHO classification. The most common spinal meningioma histology is WHO grade I meningothelial meningioma (80%) . WHO grade II clear cell meningiomas have a predilection for the spine and are believed to originate from the denticulate ligaments .

For a discussion of the pathology of meningiomas, refer to the general meningioma article.

The vast majority (90%) of spinal meningiomas are intradural extramedullary in location. Occasionally (5%), purely extradural tumors are found. The remainder (5%) have both intradural and extradural components taking on a dumbbell appearance.

Spinal meningiomas are not distributed evenly along the canal :

Meningiomas are most often located lateral to the spinal cord (60-70%) . Those in the cervical spine are more likely to be located anteriorly compared to those in the thoracic spine .

Occasionally, densely calcified meningiomas are hypointense on T1 and T2 and show only minimal contrast enhancement.

Spinal meningiomas are typically slow growing. Surgery is the treatment of choice and complete tumor removal is achieved in the vast majority of patients. Less than 10% experience recurrence .